Ugar Sugar Works Limited (USW), the flagship organisation of the Shirgaokar Group of companies, has been involved in the manufacture of white crystal sugar for over 75 years. Its Ugar and Jewargi plants in Karnataka have a total crushing capacity of 18,000 tonnes of cane per day (TCD). At these plants, bagasse, which is a by-product, is used as a boiler fuel to generate enough electricity to meet their requirements. The excess bagasse is about 5 per cent of the weight of the cane crushed. It is saved and used as fuel in the lean period/off-season or sold to interested parties. Filter cake, commonly known as press mud, refers to the suspended impurities separated during the process of cane juice clarification by means of sulphitation. The factory sells it back to cane growers at concessional rates to be used as manure in fields. The final molasses is a highly viscous leftover material containing sugar/reducing sugar and organic/inorganic impurities, and is used as raw material in Ugar’s distilleries.

A sugar factory requires both electrical power and process steam for its operation. Cogeneration is a process that simultaneously produces two or more forms of useful energy such as electrical power and steam, and electric power and shaft (mechanical) power. With the government announcing various fiscal incentives for the use of renewable energy for cogeneration in sugar factories, it has become a viable proposition to adopt high pressure and efficient boilers using bagasse to economically generate steam and power. Also, after meeting the captive requirements, the surplus power can be exported to the grid.

The power and process steam requirements in a sugar factory can be met in the following ways:

Over the years, USW has installed a bagasse-based cogeneration plant of 44 MW in two to three phases. Of this, 15 MW is used for captive consumption and the balance 28 MW is fed into the state grid. This is the single largest cogeneration plant in the country using non-conventional energy sources, that is, bagasse and other waste. Ugar uses high-pressure boilers from Thyssenkrupp (two boilers of 80 tonnes per hour (tph) of capacity and 62 kg/cm2 pressure with 480°C) and turbines from Siemens and Shin Nippon (Japan). In the first phase, started in 1998, the cogeneration plant produced 18 MW of power, of which 10 MW was exported to the grid. In the second phase, which started in 1999, it produced 28 MW, of which 18 MW was exportable power. Driven by the outcome and in order to crush maximum cane in the peak recovery season, USW, in 2001, decided to expand its sugar factory capacity from 7,500 TCD to 10,000 TCD by adding a larger size milling tandem (42×84 inches), an 80 tph, 62 kg/cm2, 480°C boiler, and a 22.8 MW Shin Nippon back-pressure turbine. 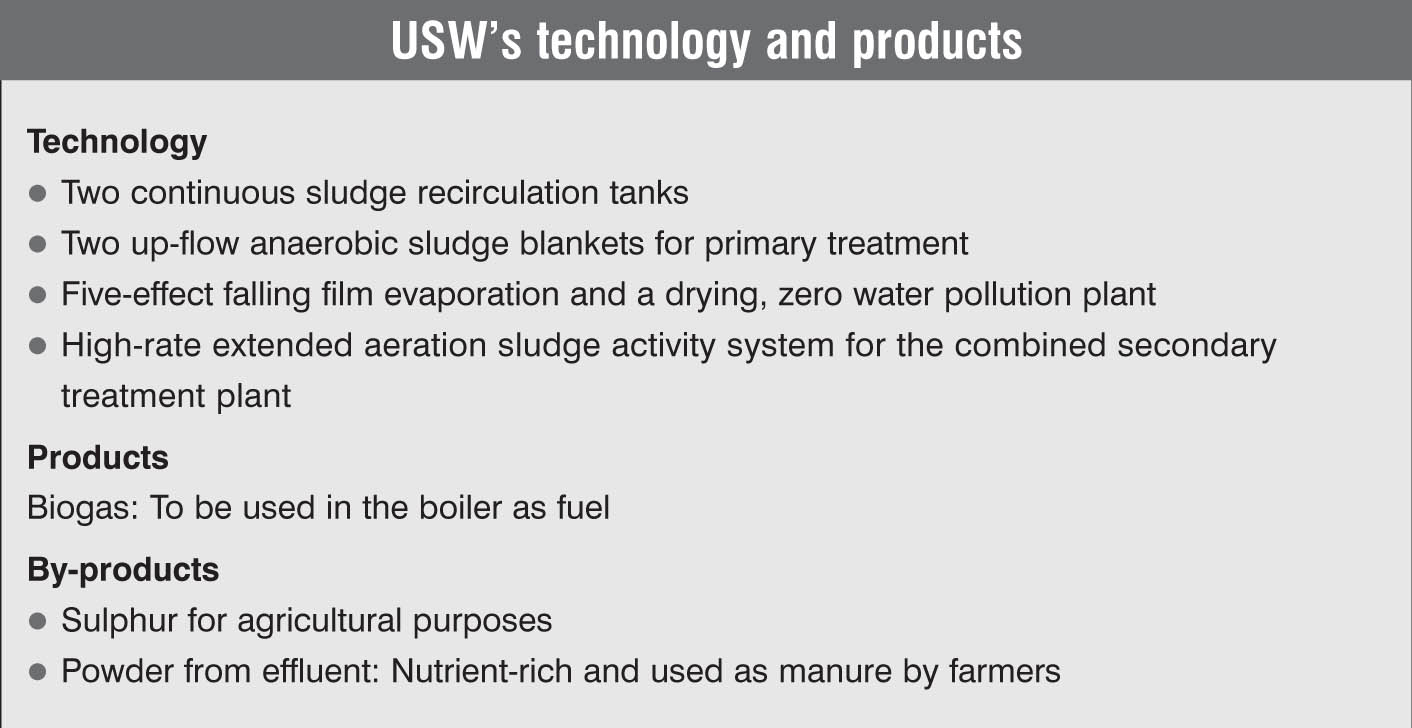 USW is the largest sugar manufacturing company in South India. However, the operation of the sugar plant and the distillery unit leads to significant water and air pollution. This is controlled as per the norms laid down by the Central Pollution Control Board (CPCB), the State Pollution Control Board and the Ministry of Environment, Forests and Climate Change.

For water pollution control, four biomethanation plants have been installed in the distillery unit. About 1,000 tonnes per day of effluent are treated and the methane-rich biogas generated in the bio-digester is used for 1 MW of power generation through a gas engine. In this treatment, 80-85 per cent of the pollution load is converted into energy. Further, a combined effluent treatment plant is being operated, in which the sugar factory effluent and domestic waste from the employees’ colony is treated along with the distillery effluent generated from biomethanation. In this plant, about 16 units of aerators (10 with a capacity of 25 HP and six of 5 HP) are used in a two-stage aerobic treatment process, followed by clarification. The treated effluent is mixed with low pollutant water like condensate and cooling tower overflows, and is finally sent for the irrigation of over 1,500 acres of sugarcane fields. To reduce air pollution, electrostatic precipitators are installed in all boilers. The collected ash is used for brick manufacturing and is also sold as manure to farmers.

For the environmental management of the sugar, distillery and cogeneration units, the factory has invested around Rs 80 million in setting up a self-monitoring system, a laboratory and modern equipment, etc. Now the company is installing a new effluent treatment plant for distillery spent wash, that is, five-effect falling film evaporator with thermal vapour compression system for zero pollution. The organisation is certified with both ISO 14001 (certification for the best environment management system) and ISO 9001 (certification for the best quality management system). 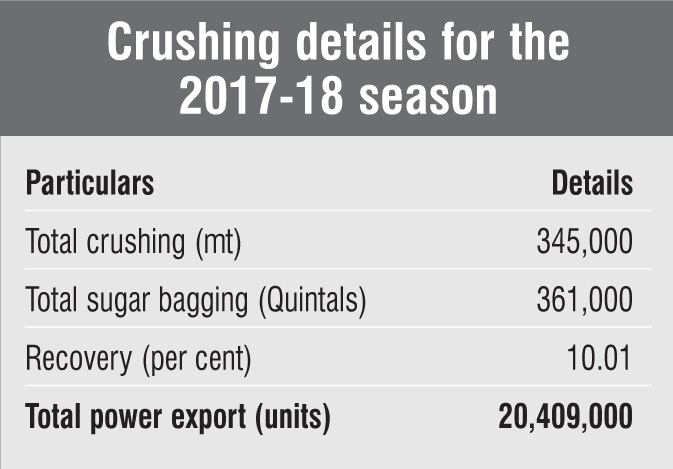 Ethanol and other distillery byproducts

Ugar has two distilleries on its premises at Ugar Khurd. The first one is an old distillery with a capacity of 30,000 litres per day (lpd), while the second one is a newly constructed distillery from Praj Industries, Pune, with a capacity of 45,000 lpd. The Praj distillery runs on continuous fermentation technology. The whole unit for distillation has been constructed with copper, which gives a very good quality of spirit. This plant has a high level of computerisation and automation. Currently Ugar’s distilleries are running at a capacity of 75,000 kilolitres per day. They use Ugar High-Yield Fermentation Technology, producing a final alcohol percentage in the process at 8.5-9.5 per cent. Besides alcohol, Ugar started the production of ethanol-biofuel in March 2003. The ethanol (absolute alcohol) plant was commissioned by Associated Engineers, Gujarat with a capacity of up to 20,000 lpd, based on the Azeotropic Distillers’ method, in which benzene is used as an entrainer. Ugar is supplying ethanol to petroleum companies such as Indian Oil and Bharat Petroleum for 5 per cent blending with petrol. The byproducts of the distilleries include fermentation sludge, which is dried, separated and used for poultry feed. Others include fusel oil, which is separated from the distillery section (mixture of higher alcohol) and used for amyl alcohol/perfumes, and carbon dioxide (also produced in the fermentation process), which is scrubbed and filled in cylinders and used for industrial purposes. As mentioned earlier, the low-grade potash powder from the effluent treatment process contains about 15 per cent potash and all other useful nutrients for crops, especially for sugarcane. The Ministry of Science and Technology sanctioned a soft loan for this purpose. The efforts made by the factory for setting up this plant, the first in India, were appreciated by the CPCB. At present, 100 per cent potash is imported in India, and through this process indigenous potash can be recovered.

Ugar’s new greenfield project is in Jewargi, Gulbarga district, Karnataka. About 162,000 square metre land was required for the entire factory and administrative set-up. The main product is white crystal sugar, and by-products are cogeneration power (15 MW), molasses and press-mud. The licensed capacity of the sugar plant is 3,500 TCD (expandable up to 5,000 TCD). The land acquisition and machinery procurement work has been completed.

In sum, USW is an example of diversification and modernisation, where expansion plans go hand-in-hand with market dynamics to maximise profit and efficiency. Other sugar mills should be encouraged to follow such role models, in order to take the segment forward. 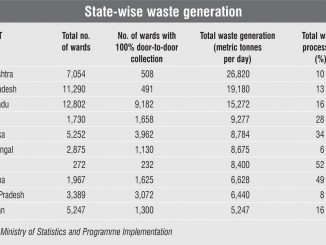 March 2017
Solid waste refers to any refuse resulting from human or animal activities that has been discarded on purpose or because it is no longer useful. In la...
More 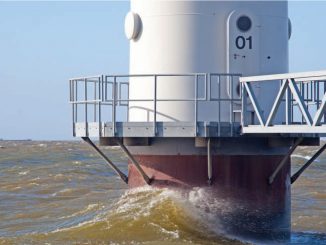 May 2017
For the Indian wind power segment, 2016-17 has been a record year, both in terms of cumulative installed capacity and annual additions, with the count...
More 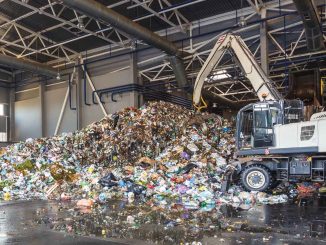 October 2018
Anukriti Despite the slow growth in the waste-to-energy (WtE) segment, there has been an overall increase in the grid-interactive as well as the off-g...
More