The Nordic power system is facing the twin challenges of integrating intermittent renewable power generation and decommissioning thermal plants. At the political level, there is a strong will to form a close-knit European energy union. To this end, three Nordic transmission system operators (TSOs) – Sweden’s Svenska kraftnat, Norway’s Statnett, Finland’s Fingrid – together launched the Nordic Grid Development Plan in 2017.

The common plan provides a collective reporting of current plans and grid development projects across the Nordic region. It also identifies five prioritised corridors where additional development needs will be assessed during the next two years. The five corridors are Norway-Denmark, Norway-Sweden, Norway-Finland, Sweden-Finland and Sweden-Denmark.

The key drivers for Nordic grid development identified in the plan are new renewable generation, increased transmission flows in the north-south direction of continental Europe, grid integration of the Nordic system with continental Europe and the UK, and decommissioning of nuclear plants in the region. In addition, supply security remains a central driver for the plan.

Further integration between the Nordic countries and the continent/UK: Despite nuclear decommissioning, energy surplus in the Nordic system is likely to increase over the next few years. To achieve maximum energy utilisation, it is crucial to strengthen the transmission capacity between the Nordic countries and the UK or continental Europe. The move will increase market integration and maximise the benefits of renewables. In addition, for daily regulation purposes, it will be beneficial to further connect the Nordic hydro-based system to the continental thermal and Danish wind-based systems.

Integration of renewables and north-south flows: Given the political goals of reducing carbon emissions and the cost of wind and solar power development, further integration of renewable energy is expected in the Nordic countries. With the installation of new interconnectors to the UK and the Baltic states, and substantial renewable generation capacity addition, it is essential to strengthen transmission capacities in the north-south direction in Sweden, Norway, Finland and Denmark. In addition, nuclear and thermal plants are expected to be decommissioned in both southern Sweden and Finland, which will further increase the demand for capacity in the north-south direction.

New consumption: Depending on the location and size, increased electricity consumption may also drive the grid investment requirement. In the Nordic far north region, substantial reinforcements may be required with the establishment of new power-intensive industries such as mines, and the shift from fossil fuel to electricity in the petroleum industry. The general trend towards the use of electrical transportation, increase in electricity consumption in larger cities, etc. will also increase the focus on securing uninterrupted power supply.

Baltic integration: To improve energy security, the Baltic states are in the process of desynchronising from the Russian system. Based on an agreement among the member states involved in the Baltic Energy Market Interconnection Plan, synchronisation with the continental system is the preferred alternative for the Baltic system. The Baltic-Continental synchronisation and other market-based changes will lead to a potential change in the north-south flow involving Sweden, Finland and Poland and will hence, require further investigation by Nordic TSOs.

Future of thermal and nuclear power: A substantial proportion of thermal and nuclear power plants, especially in Sweden and Finland, are expected to be decommissioned by 2030. This will lead to an increased system adequacy risk. For instance, the realisation of the Hanhikivi 1 nuclear power plant (NPP) will keep nuclear production in Finland at the pre-decommissioning level, but it will require grid investments as it is planned to be built at a location different from that of existing NPPs.

Along with the factors discussed above, there is also an increasing need to refurbish the grids in the Nordic region. A large part of the transmission grid was built during the 1950s and 1960s. The replacement of old lines and substations with new and higher capacity substations has already started, but there is a need for long-term investment in grid renovation.

The Nordic TSOs are planning to invest more than Euro 15 billion in the development of the regional grid network. In the Nordic Grid Development Plan, the projects have been categorised as national projects of Nordic importance, cross-border projects within the Nordic area, and interconnectors to other synchronous areas. Each Nordic TSO has a large number of internal grid investments including reinvestments. Some of these investments have a more direct impact on the Nordic and European system as they are needed to improve cross-border interconnectors.

In Finland, several projects of Nordic importance are at various stages of development. One of the crucial projects is the 70 km, 400 kV Hikiä-Orimattila line and the new Orimattila substation in Orimattila, Pennala. The new power line will allow both 400 kV and 110 kV transmission lines and associated substations between Hikiän and Orimattilan. Construction, which began in 2017, is scheduled to be completed in 2019.

Another project that is part of north-south reinforcements involves the construction of a new 300 km, 400 kV alternating current (AC) single-circuit overhead line (OHL) between Pyhänselkä and Petäjävesi. The project will increase the north-south transmission capacity, thus enabling renewable energy integration, creation of a new connection to Sweden, and connection of conventional generation and renewables in northern Finland.

The new Keminmaa-Pyhänselkä transmission line, located in northern Finland, is another important project for the integration of the new generation facility at Bothnian Bay. It will help meet the increased transmission capacity demand. It will also help enable cross-border supply between Sweden and Finland.

In addition, Fingrid has proposed a project that involves the construction of a new double-circuit 400 kV OHL line between Valkeus and Lumimetsä. The new line is required for connecting the Fennovoimas NPP plant, planned to be built in Pyhäjoki, to the grid. The decision to build the connection and schedule depends on when the construction permit to build the Hanhikivi NPP is given.

Grid development in Norway is characterised by several projects in the north-south direction, which will facilitate new renewable facilities, improve interaction with other countries, and prepare the grid for increased consumption patterns.

In Norway, Statnett is constructing new 420 kV lines in Fosen to facilitate new wind power production. The lines currently under construction are expected to be operational by 2019. The TSO is also undertaking the 450 km, 420 kV Balsfjord-Skillemoen transmission line project. The project will increase the transmission capacity in the north of Norway, mainly to serve the increased petroleum-related consumption, and improve supply security. In addition, the project will help evacuate power from some new wind power production facilities.

Grid development in Denmark includes projects to connect new consumption (data centres), new generation (offshore wind farms) and domestic reinforcements due to upcoming interconnectors. The country’s TSO Energinet.dk has proposed investments for several projects. One of them is the construction of four 400 kV lines – Endrup-Idomland, Revsing-Landelupgaard, Idomland-Tjele and Bjæverskov-Hovegaard. The investments are aimed at integrating the ongoing and planned connections of renewable generation (offshore wind farms), and connecting new interconnectors to the domestic grid. These projects will be undertaken during 2019-21.

Cross-border projects in the Nordic areas

One of the major cross-border projects is the third 200 km, 400 kV AC link between Sweden and Finland. The Euro 130 million project, which has been proposed to increase trading capacity, ensure power adequacy and exchange system services in Finland, is expected to be commissioned in 2025. 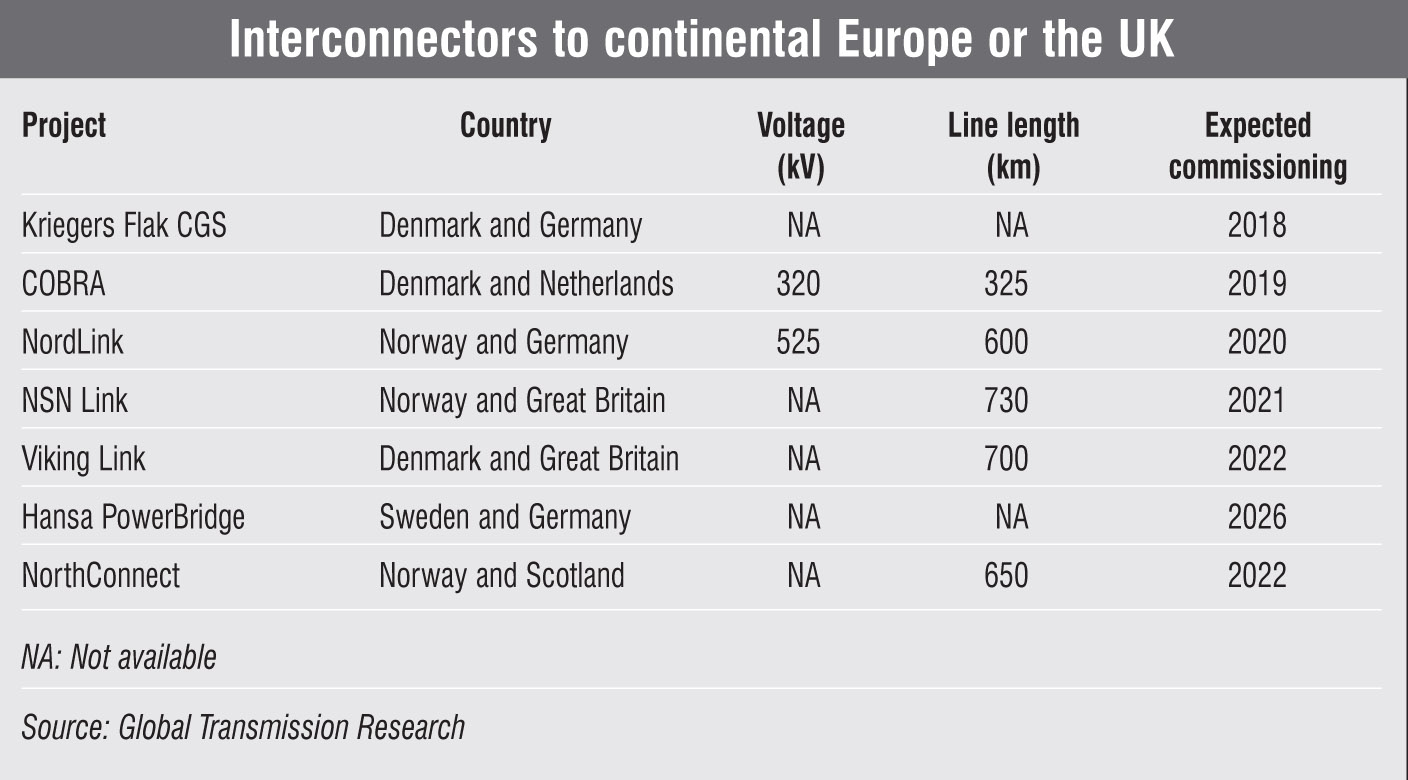 Interconnectors to continental Europe or the UK

The 400 MW CGS project, being developed by Danish grid developer Energinet.dk and 50 Hertz, will connect the Baltic 1 and 2 offshore wind farms in German waters and the 600 MW Kriegers Flak wind park in Denmark with the national grids of both the countries. The interconnection project will facilitate transfer of power between the Danish island of Zealand and the state of Mecklenburg, West Pomerania, in Germany. The link is expected to be operational in the first quarter of 2019.

The 700 MW COBRA cable between the Netherlands and Denmark is a new subsea ±320 kV direct current interconnector based on voltage source converter (VSC) technology. The project includes a 325 km cable link comprising 300 km of undersea cable and 25 km of underground cable that will come ashore in Eemshaven (the Netherlands) and Endrup (Denmark), where high voltage direct current (HVDC) VSC stations will be set up. The project is expected to be completed in 2019.

NORD.LINK will be the first interconnector to directly link Norway and Germany. The project involves the construction of a 520-600 km long, ±525 kV HVDC link with a capacity of 1,400 MW. The cable comprising subsea and underground sections will run from Tonstad in Vest-Agder (Norway) to Wilster in Schleswig-Holstein (Germany) across the North Sea. Two converter stations, one each in Germany and Norway, will also be built for coupling the German and Norwegian high voltage grids. The project is expected to be completed in 2020.

Under the NSN link, a 730 km long HVDC interconnection with a 1,400 MW transfer capacity will connect Blyth on the Northumberland coast of the UK to Hylen in southwest Norway. Around 340 km of the interconnection will be in UK waters. Once constructed, the interconnector will be the world’s longest subsea electricity cable. The project is expected to be completed in 2021.

Undoubtedly, the Nordic TSOs have been at the forefront of joint regional network planning. As a result of the joint planning exercise, a common network development plan has been launched by the Nordic TSOs. However, a shortcoming of this system is that, in some cases, the strengthening of the grid is best done in one country whereas the benefits of the investment are felt in a different country. To ensure the efficient functioning of the wholesale electricity market, the TSOs should push for the relevant legal and regulatory frameworks as the next big step in Nordic grid development.