The Indian solar power market is yet to see growth across the value chain. Even as the installed solar capacity promises to grow every year, the manufacturing segment continues to lag behind. During 2017-18, domestic production accounted for only 7-10 per cent of the total module requirement, down from about 14 per cent in 2014-15. The country’s module manufacturing capacity is highly inadequate, particularly in light of the 2022 target, which requires the installation of 18-20 GW of modules every year. In addition, there has been a significant decline in the utilisation of the existing capacity due to low demand. Levying anti-dumping duties is being considered, in order to create a level playing field for international and domestic manufacturers. The question, however, is whether the Indian module manufacturing market needs protectionist policies or promotional measures.

The operational cell manufacturing capacity is dominated by five companies, which together account for a total capacity of 1,103 MW, or 66 per cent of the total market. Tata Power Solar Systems and Jupiter International are the market leaders, with a 16 per cent share each. While Tata Power Solar Systems is utilising about 90 per cent (270 MW) of its installed capacity (300 MW), Jupiter International is functioning at 100 per cent of its installed capacity at 260 MW.

The country has no manufacturing capacity of wafers and ingots. Lanco Solar is in the process of setting up a manufacturing facility in a 250 acre special economic zone in Chhattisgarh, to produce 300 MW of ingots and wafers per year. In April 2018, China-based GCL-Poly Energy Holdings and Japan-based Softbank entered into an joint venture agreement to set up an integrated solar photovoltaic manufacturing facility in Andhra Pradesh for ingots, wafers, cells and modules. It is expected to be built at an investment of $930 million, with a cumulative capacity of 4 GW. 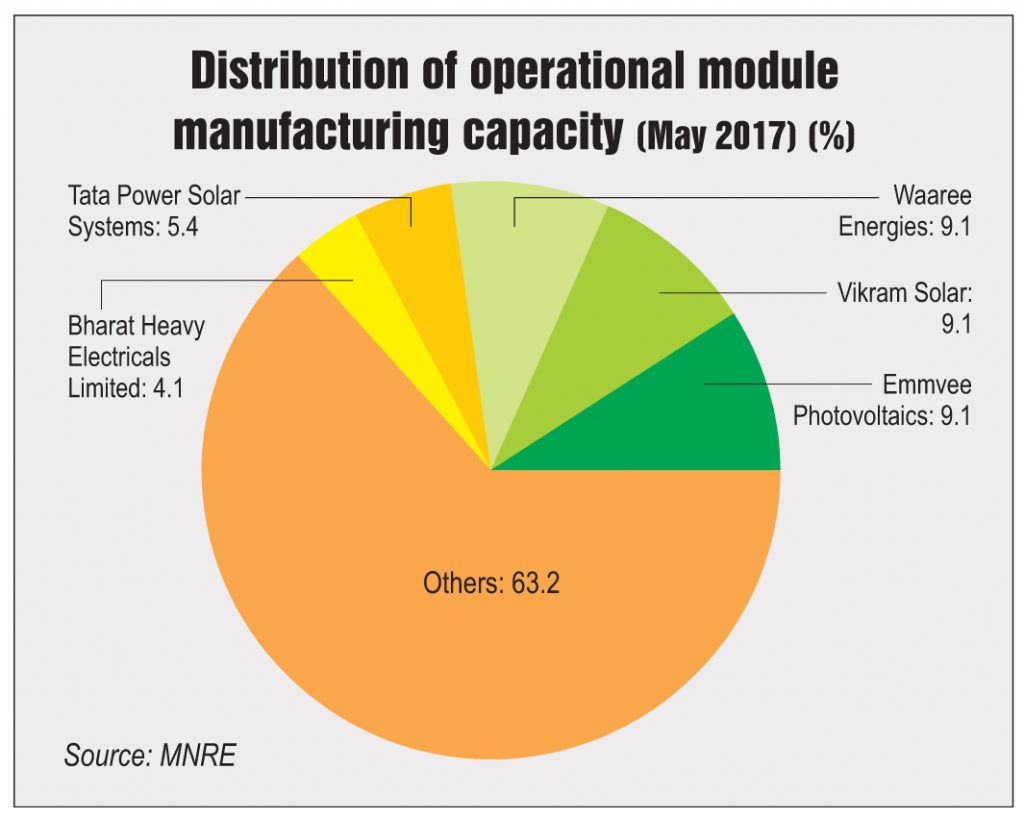 As per BRIDGE TO INDIA, a total of 7.54 GW of solar capacity was installed during the period October 2016 to September 2017. Trina Solar was the top module supplier with a contribution of 16.6 per cent, followed by JA Solar with 9.2 per cent, Canadian Solar with 8.7 per cent, and RISEN and Hanwha with 8 per cent and 7.6 per cent respectively.

However, leading domestic module manufacturers did not feature even amongst the top 10 module suppliers in the country for the given period. The segment is dominated by Chinese players, with Canadian Solar, South Korea-based Hanhwa and US-based First Solar being the only non-Chinese module suppliers in the top 10.  Amongst domestic manufacturers, Waaree holds the twelfth position with a market share of 2.6 per cent, followed by Vikram Solar with 2.4 per cent and Tata Power Solar Systems with 1.7 per cent.

Globally, anti-dumping duties have been imposed on Chinese modules that have been flooding the markets. In 2013, the European Union (EU) imposed tariffs on Chinese solar module imports. In September 2017, the EU decided to reduce the minimum import price that provides the basis for anti-dumping duties on imports from China. Companies that sell solar products below these prices are required to pay import duties of 64.9 per cent. In January 2018, the US released a list of over 100 countries including India that have been exempted from the anti-dumping duty of 30 per cent. However, this list does not include China, Taiwan and Malaysia, the duties for which have not yet been determined.

India, too, is contemplating a similar anti-dumping duty to keep Chinese solar module imports in check, following complaints filed by the Indian Solar Manufacturers Association (ISMA) regarding the “dumping” of cheap, low-cost solar modules during April-June 2017. An investigation was launched by the Directorate General of Anti-Dumping and Allied Duties on Chinese, Taiwanese and Malaysian solar modules imported during the period. The investigation has now been terminated following the withdrawal of the complaint by the ISMA citing that the period of investigation was inadequate. According to the ISMA, imports from these countries increased by 33-45 per cent during July-December 2017 while prices fell by 25 per cent, further damaging the market for domestic players. Following another petition by the ISMA, the Directorate of Safeguards initiated a safeguards investigation in December 2017, and recommended the imposition of a provisional safeguard duty of up to 70 per cent for a period of 200 days. The proposed safeguard duty exempts all developing countries except China and Malaysia. A final decision on this is yet to be taken. 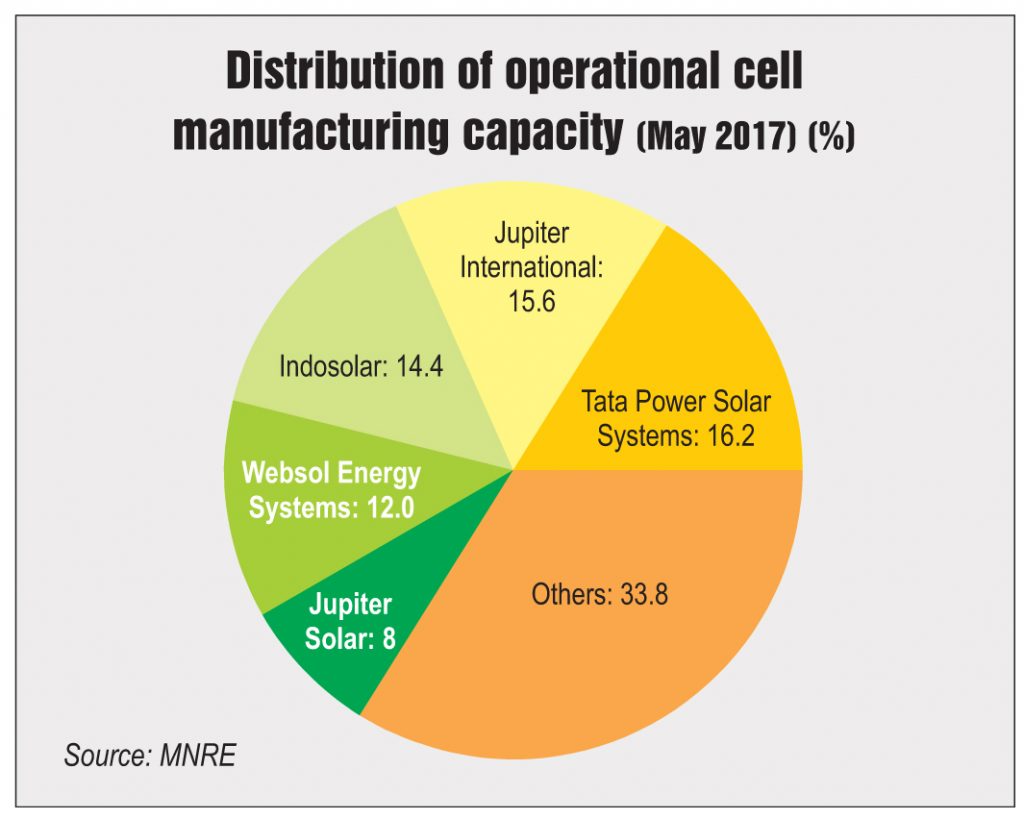 The impending levying of duties has sparked a debate in the module manufacturing market. The industry stands divided between two possible outcomes – the duties will increase the cost of Chinese modules, making domestic modules more competitive, or the high cost will lead to restricted imports, slowing down segment growth. Whether the duties are levied or not, a hard fact remains that, at present, the country does not have the manufacturing capabilities to cater to the annual demand in order to achieve the 100 GW installed solar capacity target by 2022. Moreover, with the ruling of the domestic content requirement (DCR) case at the World Trade Organization going against India, the market for local manufacturers continues to be limited. Under the present circumstances, it is necessary for the government to create a domestic manufacturing market as strong and capable as that of China before levying duties to protect domestic manufacturers, which may put a large solar power capacity at risk.

Meanwhile, in order to promote the market, the MNRE, in December 2017, released a concept note of a proposal to build the country’s solar manufacturing capacity. The proposed concept note seeks direct financial support of Rs 110 billion, which would be provided to manufacturers to expand and upgrade their existing facilities, a 12 GW central PSU DCR programme to create demand and expand its scope from modules to polysilicon,  cheaper loans, 30 per cent central financial assistance, and customs duty exemptions. Further, the Solar Energy Corporation of India invited expressions of interest for setting up 20 GW of solar manufacturing facilities over the next three years.

Once the benefits of the proposed policy come into effect, the Indian solar industry may be in a better position to levy the anti-dumping and safeguard duties. Based on international experience, it can be concluded that anti-dumping duties have helped local manufacturers compete in the market. However, the manufacturing base in the EU or the US is much larger than that in India, due to which a similar policy may not yield similar results. Therefore, protectionist policies without adequate infrastructure may lead to a counterproductive scenario wherein a large solar capacity could become stranded.