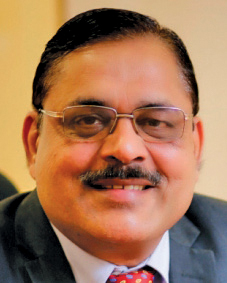 The power sector is going through a transition period and, going ahead, the critical success factors for its performance are bound to change, depending on how well renewables are integrated with the grid,” notes Prakash Tiwari, director, operations, NTPC Limited.

A mechanical engineer from NIT Raipur, Tiwari began his career as an executive trainee with NTPC in 1981. During a career spanning 37 years, he has built a reputation as a professional manager, strategic planner and business leader. He is known for his contributions in the management of large-sized plants, operations and maintenance (O&M) of plants, and project construction. He has also led several initiatives for achieving operational excellence at NTPC’s power plants.

Tiwari took over his current role in January 2018. He is responsible for the operations of generation assets worth over 52,000 MW, as well as for fuel security and environmental compliance of all power plants. Prior to this, he was executive director, operations. He has worked at a senior management level for over seven years, as the business unit head of various NTPC stations including Unchahar, Ramagundam, Korba and Solapur. He is also chairman on the boards of NTPC-Tamil Nadu Energy Company Limited and Kanti Bijli Utpadan Nigam Limited, and a member of the CSIR-CIMFR Research Council.

On the outlook for coal-based power, Tiwari says that this segment will continue to play a crucial role in the future despite the rapid growth in renewable energy. “Its share in the total energy mix is not likely to reduce below 65-70 per cent. According to him, despite renewables achieving cost parity with thermal power, balancing power will be provided by coal. “Given the erratic output of renewable energy-based plants, coal will be responsible for addressing the shortage in demand vis-à-vis supply.” Going forward, NTPC expects to increase its renewable energy capacity by 10,000 MW and execute thermal power plants totalling a capacity of 18,000 MW by 2022. In this context, he feels that O&M practices will play a key role in maintaining plant efficiency.

Given the need for flexibilisation, Tiwari says that NTPC has started preparing its units for faster ramp-up and operation at lower technical minimum loads by conducting test runs. Going forward, it plans to invest in mechanical retrofits, control and automation tools, and a host of technologies like pollution control systems and electrostatic precipitators.