Say hybrid and, for most people, the thought goes to electric vehicles that operate on a combination of electricity and one conventional fuel. For the renewable energy industry however, the word increasingly refers to a fast growing number of projects that are wiring together wind, solar, hydro, geothermal and biomass-based energy in different combinations, often with battery storage. The concept of hybridisation of various modes of renewable energy is being pushed globally in order to drive up plant capacity and ensure steady electricity output from these intermittent sources of energy.

The installed base of hybrid projects globally is still relatively small, but a number of countries are now increasingly exploring this segment, supported by technology advancements. India is not alien to the concept either. The country’s first large-scale hybrid plant was commissioned by Hero Future Energies in April 2018, in Karnataka. The plant, which combines 50 MW of wind turbines with 29 MW of solar photovoltaic (PV) modules, came up despite the lack of a policy for wind-solar hybrids at the time. Set up by Siemens Gamesa, the plant has been able to operate as a captive producer, directly supplying power to industrial consumers.

Prior to this, the only solar-wind hybrid plants in the country were those that were set up as demonstration or pilot projects. The move from demonstrator-scale projects to utility-scale ones is only beginning now. Notably, the economic advantages of hybridisation will make it an essential part of renewables deployment in the future. Realising this, the Ministry of New and Renewable Energy (MNRE) has released the National Wind-Solar Hybrid Policy to spur dual-technology deployments to help meet the country’s renewable energy ambitions.

India has long seen the potential of complementary wind and solar generation, with one helping to streamline the other’s intermittency and maximise the use of land and grid-connection resources. In 2016, the MNRE set a target of installing 10 GW of renewable capacity in solar-wind hybrid mode by 2022. States such as Gujarat, Tamil Nadu, Maharashtra, Karnataka and Andhra Pradesh, which already have large installed capacities of both wind and solar power projects, are likely to be the frontrunners. However, the ability of hybrid plants to compete in a market witnessing an exponential rise in solar and wind project tenders has been hampered by the lack of proper policies and regulations. The MNRE’s latest move to release a set of guidelines for the hybrid segment, with a forward-looking statement on the inclusion of storage in the equation, has been well received by the industry and will open up a new opportunity for project developers.

Hybrid power projects have several advantages over stand-alone ones. Given that critical infrastructure such as land and the evacuation network accounts for about 25 per cent of wind or solar project costs, hybrid projects would benefit from a reduction in capital costs due to common infrastructure and land use. Solar projects, in particular, need large stretches of land, with a single megawatt of capacity requiring 5 to 7 acres. So, if some solar modules can be installed in the spaces between wind turbines, the savings on land costs could be considerable.

Further, the generation profile of a hybrid project would be relatively higher with lower variability than that of a stand-alone wind or solar project, given that generation from both the sources is at different intervals and in complementary seasons. This, in turn, would partially address the concerns of distribution utilities regarding grid instability due to the intermittent nature of wind and solar. From the developers’ perspective too, a hybrid project needs the installation and maintenance of one transmission line instead of two, had the solar and wind projects been separate. This reduces costs and leads to greater continuity of power supply – since both solar power and wind power are infirm sources of energy and vary according to the intensity of radiation or wind speed. This improves the plant load factor of the entire project.

The availability of renewable energy resources at a site is an important factor in developing hybrid projects. Given that wind and solar resources are often abundantly available at the same place, it is essential to pave the way for their integration. However, prior to setting the targets and formulating the National Wind-Solar Hybrid Policy, the MNRE had directed the National Institute of Wind Energy (NIWE) to prepare a hybrid wind and solar energy production analysis report.

The NIWE selected 24 sites across the windy states of India for conducting the analysis. The study concluded that wherever wind downtrends, solar tends to compensate for the reduction in wind power generation. The study also stated that a 64 per cent increase in energy production can be realised by adding 1 MW of solar capacity to 1 MW of wind capacity at a windy site. So, hybridising these renewable sources will lead to a higher quantum of generation and facilitate continuous supply of power to the grid.

The MNRE held consultations with various stakeholders to devise the final guidelines, which were released on May 14, 2018. The key features of the policy are:

Adding storage to the equation is a well-thought-out move, given that the key challenges in achieving the country’s renewable energy targets lie in the inability of the grid to integrate variable solar and wind power, as well as the huge investment required for upgrading the transmission and distribution (T&D) infrastructure. Energy storage can help in better integration of the renewable energy by providing multiple benefits to the system. These include optimising T&D investments, addressing forecasting errors in solar generation for more accurate scheduling as well as local reliability issues by providing reactive power support, enabling end-users to manage peak load, and efficiently utilising distributed renewables.

With the rapid reduction in the cost of solar, wind and storage technologies, customers can see solar-wind hybrid+storage as an alternative for peak power from the grid. At the same time, utilities can avoid investments in creating peak capacities or eliminate load shedding by utilising these resources. This transition is supported by a significant push for “gigafactories” for advanced energy storage technologies such as lithium-ion, which is driving down the cost of energy storage at a faster pace than even the solar PV cost reductions witnessed in the past decade.

Grid-scale energy storage projects have seen costs fall below $300 per kWh from above $1,000 per kWh just five to six years ago. It is anticipated that with the scaling-up of deployment and the creation of local manufacturing, the country could witness a further reduction of at least 20-30 per cent within the next three to five years.

While the policy has, no doubt, paved the way for the development of solar-wind hybrid projects, it is alone not enough to drive segment growth. As stated in the policy document itself, the Central Electricity Authority and the Central Electricity Regulatory Commission will need to formulate the necessary standards and regulations, including the metering methodology and standards, forecasting and scheduling regulations, the REC mechanism, grant of connectivity and sharing of transmission lines for wind-solar hybrid systems. Until this happens, the sale of hybridised power generated from the existing projects will not be possible.

Second, while discoms would prefer the bidding route for hybrid energy procurement going forward, clarity will be needed in terms of procuring such hybrid energy. There also needs to be clarity on how power purchase agreements (PPAs) will be reworked in case another generation source is added to a project. The new PPAs would need to be structured in such a way that the project developer gets better margins through lower generation costs and higher volumes. It is also to be seen how the RPO norms would be applied to these projects. Further, adequate evacuation network availability would be critical for new hybrid projects as well as for hybridisation of the existing wind or solar projects, given the higher generation profile expected. 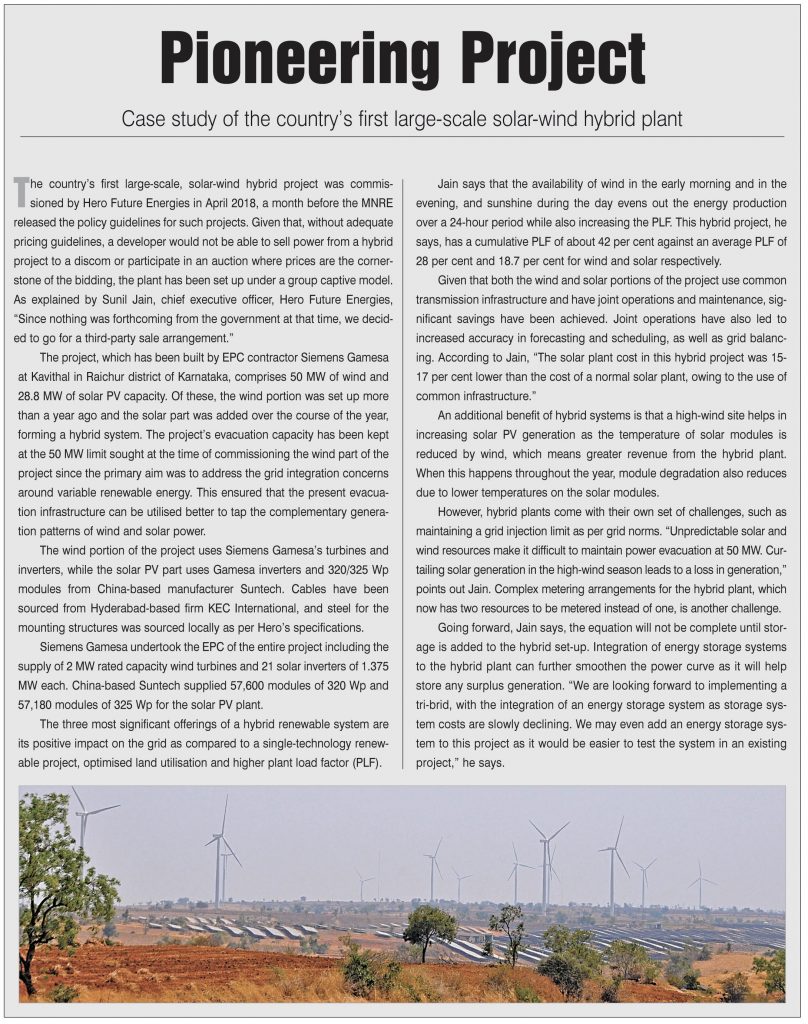 As the government works towards providing greater clarity on the aforementioned issues, it has started building a pipeline of solar-wind hybrid projects. The Solar Corporation of India (SECI) is set to launch its second tender for hybrid projects. It has issued an advertisement alerting developers that it will be inviting sealed bids for setting up 1,000 MW of wind power projects at existing solar power project sites as well as 1,000 MW of solar power projects in shadow-free areas of existing wind power projects. This is much larger than the first tender for 160 MW that was issued by SECI in January 2018, which envisaged setting up a greenfield hybrid project in Anantapur district of Andhra Pradesh. The results of this bid, which also included a small storage component, are yet to be announced.