Metro rail systems are rapidly becoming the most convenient means of commuting for India’s urban population with metro rail systems already operational in 10 cities across the country, and in the construction or planning phase in nearly 13 cities. Owing to the large-scale operations of the vast metro network and high frequency of service, huge amount of energy is consumed. This energy consumption entails high cost of power, approximately 34 per cent of the total input cost in case of Delhi Metro. This cost is increasing year on year due to the increase in tariffs as well as further expansion of the metro network, thereby affecting the financial viability of the entire project.

This has led to metro corporations in almost all the cities to adopt renewable energy on a large scale to reduce their operational costs. Mostly solar rooftop systems are being installed on metro stations, parking spaces, or other buildings and workshops under the metro jurisdiction. At present, the business model being adopted by the respective metros in all cities is similar, where a renewable energy service company (RESCO) is selected through the competitive bidding route to install solar photovoltaic (PV) systems. This RESCO invests its own money in setting up these solar PV systems through a long-term power purchase agreement (PPA) with the metro corporation. Further, it sells the power to the metro at the tariff discovered under competitive bidding.

In some cases, the metro corporations are also looking towards ground-mounted solar plants, and installation of solar panels on even foot overbridges. For instance, the Delhi Metro Rail Corporation (DMRC) has been quite proactive with regard to renewable energy uptake and  already has about 15 MW of installed cumulative solar power in its portfolio (as of March 2017), with a plan to reach 50 MW installed solar capacity by 2021. As of March 2017, the DMRC had already signed PPAs for at least 31 MW of solar projects. It also plans to source about 23 per cent of energy generated from the 750 MW solar park at Rewa in Madhya Pradesh through open access channels at a price of Rs 3.30 per kWh, as against Rs 7.16 per kWh that it currently pays to the discom. In fact, the Solar Energy Corporation of India and the DMRC had signed an MoU for solar energy deployment in metro premises. 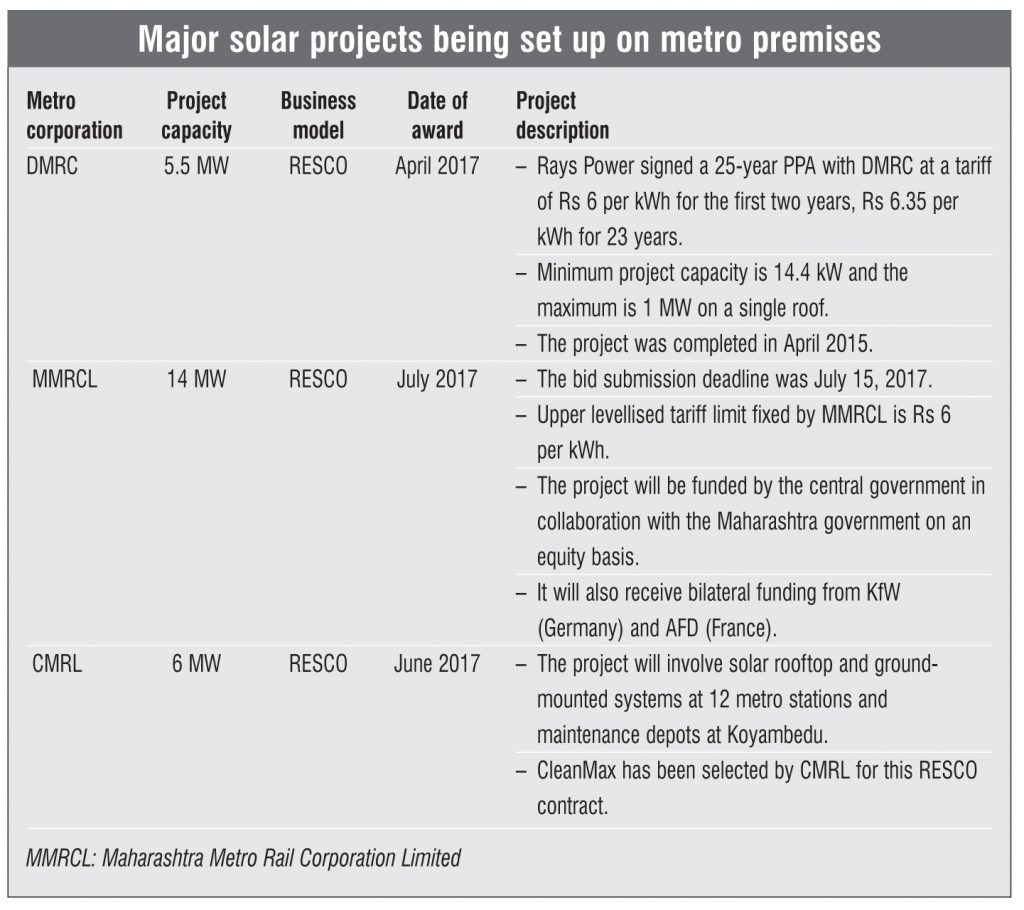 While DMRC has been at the forefront of solar energy uptake for meeting its energy demand, other metro corporations are also rapidly conducting competitive bids to install solar power plants at their identified sites. For instance, Mumbai Metro One Private Limited has launched a “Go Green Go Clean Campaign” to meet a part of its power requirement through renewable energy, while Chennai Metro Rail Limited (CMRL) is also installing about 6 MW of solar capacity on its premises. This trend is likely to continue in the future as well, since solar power has become cheaper and more affordable than the conventional power from discoms.