With the growing investor interest in solar, the share of wind power in the country’s total energy mix has been decreasing year on year. The government’s decision to phase out the feed-in tariff (FiT) mechanism and move to auctions for allocating wind power projects is expected to provide new impetus to the segment, increasing competition among players and reviving investor interest. Till date, seven auctions have been conducted, of which four have been undertaken by the Solar Energy Corporation of India (SECI) and one each by the states of Tamil Nadu, Gujarat and Maharashtra.

The tariffs discovered in these auctions have been much lower than the FiTs determined by the state electricity regulatory commissions. The latest auction conducted by SECI, in February 2018 under Tranche IV, tendered 2,000 MW of interstate transmission system-connected wind projects. The bid submission deadline was March 7, 2018. As in previous tenders, the successful bidder would sign power purchase agreements (PPAs) with SECI. In the latest wind auction, SECI had set a ceiling price of Rs 2.93 per kWh for bidders who could bid for projects with capacities ranging from a minimum of 50 MW to a maximum of 300 MW. The projects are to be developed on a buil d-own-operate basis. 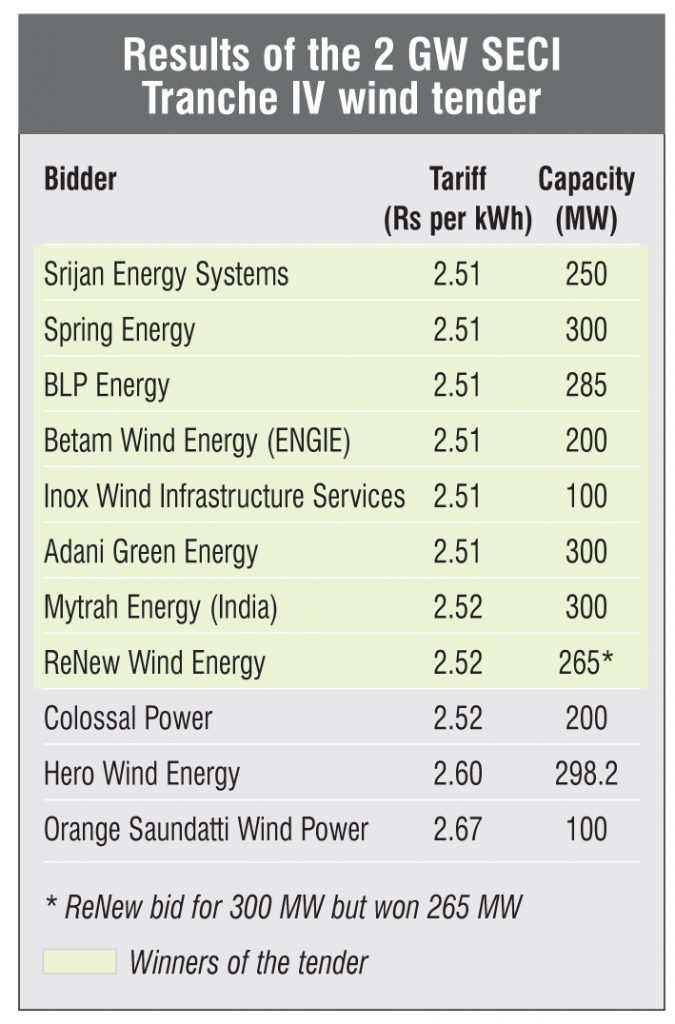 The six winning bidders quoted the lowest tariff of Rs 2.51 per kWh, while the tariff quoted by the other two bidders was just Re 0.01 higher. Of these, Srijan Energy Systems was the L1 bidder, and has been awarded a capacity of 250 MW at a tariff Rs 2.51 per kWh. Meanwhile, Sprng Energy, BLP Energy, Betam Energy, Inox Wind and Adani Green Energy have been awarded 300 MW, 285 MW, 200 MW, 100 MW and 300 MW respectively at the same tariff. Mytrah Energy, which quoted a tariff of Rs 2.52, was awarded 300 MW, the capacity that it had bid for. Only ReNew Power, which quoted a tariff of Rs 2.52 per kWh, was awarded 265 MW against the 300 MW of capacity it had bid for.

The latest auction reversed the trend from the past three auctions conducted by SECI, wherein the tariffs declined from Rs 3.46 per kWh in the first auction to Rs 2.64 per kWh and Rs 2.44 per kWh in the subsequent auctions. The fourth tranche of the auction saw tariffs firming up, and even the lowest bid of Rs 2.51 per kWh was 3 per cent higher than that in the third auction. This sudden rise in tariff implies that bidders are getting less aggressive and more cautious while bidding, and it is expected to marginally improve the scenario for developers. A similar trend was also observed in the recent 500 MW wind power auction in Maharashtra, where the lowest tariff was Rs 2.85 per kWh – about 17 per cent higher than both the SECI Tranche III auction and the Gujarat auction.

Lowest bids in wind auctions since 2017

India’s first wind power auction had closed with a rock-bottom winning bid of Rs 3.46 per kWh which was significantly lower than Rs 4.16-Rs 6.02 per kWh FiT for wind power across states, confirming the buoyancy in the alternative energy market. As most of the companies had bid close to the winning tariffs, it can be inferred that this trend was not an outlier. The tariffs have plummeted further since then to finally reach a point of economic viability as well as grid parity. The winning tariffs discovered in these auctions lie between Rs 2.43 per unit and Rs 3.46 per unit, a range of Rs 1.03 per unit. In the initial auctions, aggressive bidding was an outcome of lower counterparty and evacuation risks, with competition getting aggravated as the sector faced a slowdown in PPA signing and payment delays by states. The recent auctions reporting slightly higher tariffs indicate a slow stabilisation of the wind market, where discoms are ready to pay the price for wind power (cheaper than the average power purchase cost for the discom), and also meet their renewable purchase obligations in the process.