Waste-to-energy (WtE) is a process involving the collection, segregation, treatment and conversion of waste to produce various forms of energy including heat and electricity. Although the technology is not new and has been developed in many parts of the world, it is yet to be implemented successfully in India. Improper waste management is one of the key factors impeding its adoption. This can be attributed to the lack of strict law enforcement for waste collection, segregation, handling and sorting, and inadequate waste disposal and WtE generation facilities in the country.

Despite these challenges, a few cities have successfully developed a waste management and WtE model. A case in point is the eighth largest Indian city Pune, which is divided into 15 administrative wards and five administrative zones. With a total population of 4.5 million-5 million, the city generates 2,000-2,100 tonnes of solid waste per day, which is only expected to increase with the rapid urbanisation and changing consumer habits. The city’s waste generation is expected to increase threefold by 2041. Like most Indian metropolises, Pune is facing space constraints to set up new landfill sites. Moreover, pollution caused by municipal solid waste (MSW) can contaminate the city’s land and water resources.

The Pune Municipal Corporation (PMC) is the urban local body (ULB) that has taken up the challenge to resolve the city’s waste management woes. The city stopped open dumping of waste in 2010 and started scientific processing of MSW at decentralised plants operating at the institutional and community levels. The ULB has developed various methods to process its municipal waste. These include preliminary sorting and segregation of MSW, biological processing, electricity generation, disposal of remaining inerts in sanitary landfills, and control measures to prevent the percolation of leachate. PMC has also set up a 1 MW biogas-based power unit, which processes about 100 tonnes of organic waste per day.

PMC has introduced an integrated waste solid management service. To this end, it has deployed a total of 449 vehicles including tipper trucks, bulk refuse carriers and mechanical sweepers to collect waste from all over the city. To effectively collect and dispose of the daily waste generated, the ULB has also automated its waste collection process. The integrated waste management system deploys GPS, GSM and RFID technologies along with internet of things sensors that feed data both to mobile and web platforms for tracking the vehicles.

These efforts have reduced non-compliance and improved vehicle productivity. They have also assisted in effective usage and route planning optimisation of garbage trucks. Moreover, vehicles that break down can be given immediate assistance using tracking software.

The tracking system has increased transparency in the civic administration as it helps verify the door-to-door collection of waste. As a result, the amount of waste collected from houses as well as large collection areas has increased to 197 tonnes per day. Around 60 per cent of the city’s households have door-to-door coverage, 44 per cent of which provide segregated waste. Reportedly, PMC has saved over Rs 150 million per annum in waste handling costs. The process also ensures the timely collection and transfer of waste to the processing and energy generation units.

Solid waste can be classified into different categories based on its source, chemical composition, calorific value, water content, etc. These categories of waste are processed in different ways. For example, kitchen waste is biodegradable, whereas plastic and paper waste needs to be recycled. Meanwhile, industrial and medical waste needs to be carefully treated in special facilities as per the environment safety norms. Moreover, different WtE technologies are required based on the type of MSW. Therefore, without sorting the waste, it is not possible to convert it into a useful product.

The various methods  deployed by PMC for generating energy from municipal waste are: 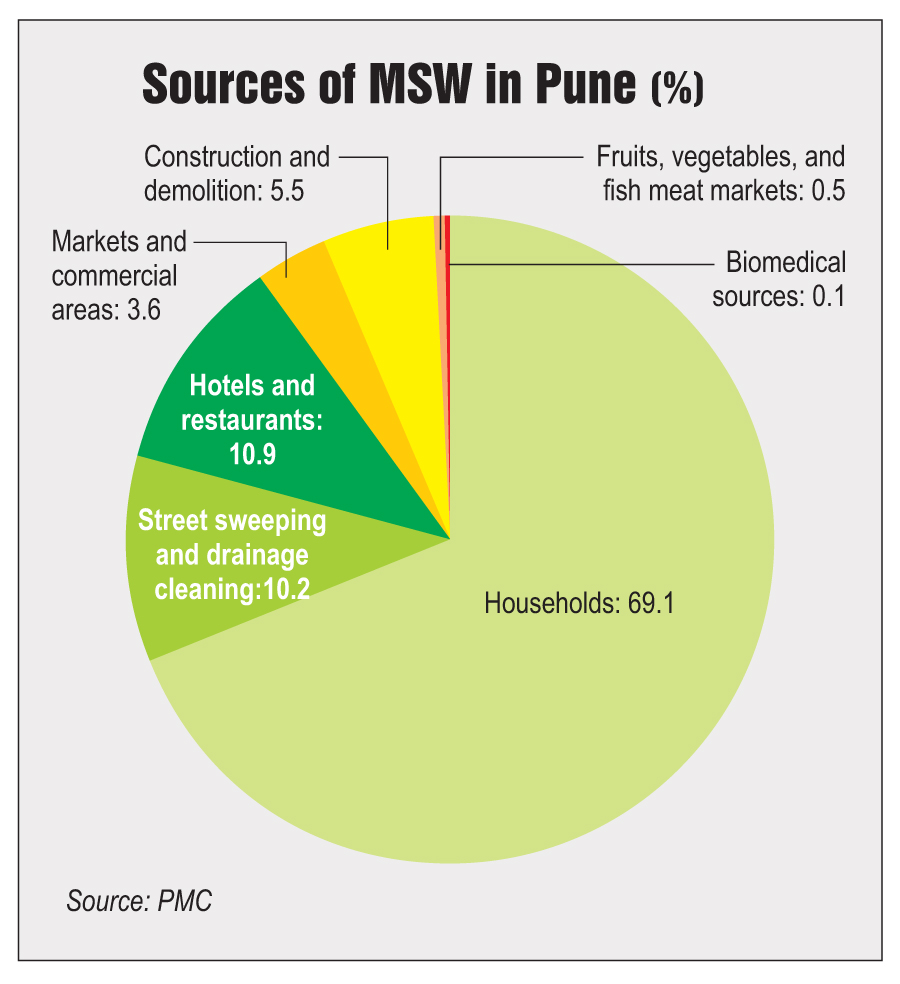 The city has recently released its Solid Waste Management Strategy Plan 2017-25 with the key objectives of achieving 100 per cent door-to-door coverage of segregated waste collection, minimising generated waste, processing 100 per cent of the waste collected in the city, developing an integrated waste management system through citizen engagement, using IT solutions for monitoring the entire waste management system, and completely avoiding open dumping at landfill sites.

The city has adopted a multi-dimensional approach to overcome the challenges of urbanisation. It is estimated that the total carbon emissions could have been 5.58 times the current emissions if the PMC had not installed the scientific technologies to process MSW in Pune. However, Pune has a long way to go before it becomes a zero-waste city. PMC believes that the solution lies in using tailor-made technologies to cater to the specific needs at local levels. The implementation of a detailed plan for managing waste and putting it to effective use seems to be the right step in this direction.