The Pradhan Mantri Sahaj Bijli Har Ghar Yojana (Saubhagya) was launched on September 25, 2017, with the aim of providing electricity to every willing household in rural and urban areas by March 2019. The scheme is different from all other schemes targeted at rural electrification as they focused on village electrification and not on providing last mile connectivity. Village electrification, by definition, does not include providing electricity connections to households. Since the launch of the scheme, about 1.38 million of the 40.48 million unelectrified households in the country have been electrified. A look at the scheme’s guidelines and the progress so far…

A total outlay of Rs 163.2 billion has been approved for the scheme, including a gross budgetary support of Rs 123.2 billion, of which Rs 105 billion (almost 85 per cent) has been earmarked for rural household electrification. The remaining Rs 17.32 billion has been kept for unelectrified urban households, which are much lower in number. The projects will be funded by grants provided by the central government (60 per cent) and the respective state governments (10 per cent) as well as through loans (30 per cent). For special category states, these shares will be 85 per cent, 5 per cent and 10 per cent respectively. The states that are able to achieve the target by December 2018 will be given an additional 15 per cent grant by the central government as an incentive. These funds will be utilised for meeting the capital expenditure requirements of the projects. Under the scheme, single phase electricity connections with service line cable, prepaid/smart meters, single point wiring, LED lamps and associated accessories are planned to be provided to the unelectrified households in line with the Central Electricity Authority’s technical specifications and construction standards. The Ministry of Power (MoP) is promoting the installation of prepaid meters under the Saubhagya scheme in order to provide the low income consumers with the facility to recharge for smaller amounts. For households in remote or inaccessible areas, there is a provision for the installation of solar photovoltaic based stand-alone systems including power packs of 200-300 Wp. In addition, up to five LED lights, one direct current (DC) fan, one DC power plug along with repair and maintenance services for five years need to be provided. The scheme also includes a provision for last mile connectivity infrastructure including poles and conductors. 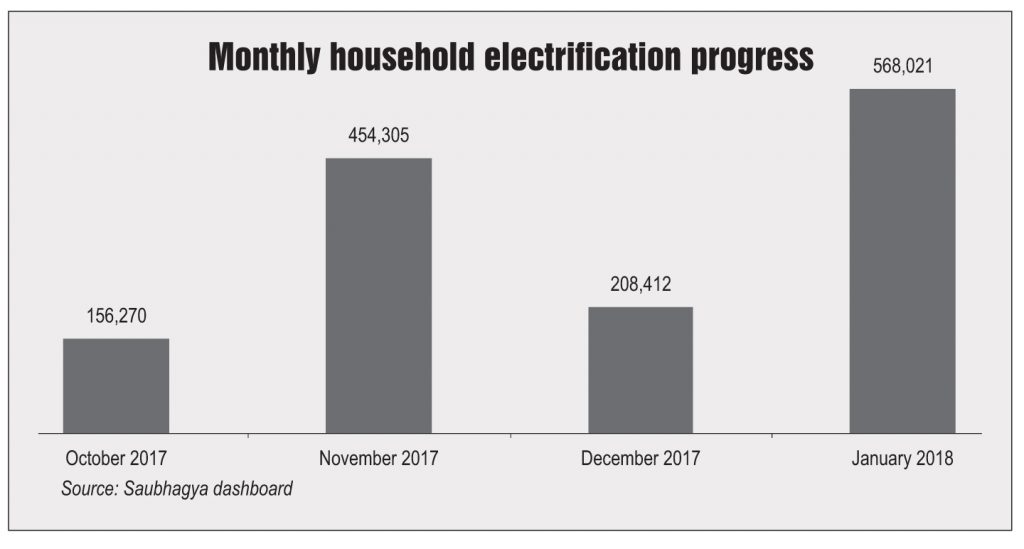 To kick-start the implementation of the scheme, the discoms were directed to start releasing connections to eligible households on an immediate basis. The connections under the scheme were released with effect from October 11, 2017. Since then, 1.38 million households have been reported to be electrified. This represents about 3.5 per cent of the total households that were unelectrified at the time of the launch of the scheme.

Madhya Pradesh, Bihar, West Bengal, Uttar Pradesh and Rajasthan account for almost 80 per cent of the total households electrified under the scheme between October 11, 2017 and January 23, 2018. However, none of the households in Kerala, Jammu & Kashmir, Meghalaya, Manipur, Arunachal Pradesh, Mizoram, Puducherry and Sikkim were electrified during this period. The states of Puducherry, Andhra Pradesh, Gujarat, Tamil Nadu and Kerala have achieved almost 100 per cent household electrification. Meanwhile, Jharkhand (45.17 per cent), Nagaland (48.75 per cent), Uttar Pradesh (52.08 per cent), Assam (53.77 per cent) and Bihar (55.71 per cent) have the lowest levels of household electrification. Under the scheme, the number of households electrified per month has varied significantly (refer to the figure). On an average, about 346,750 households have been electrified per month. (Considering that October and January figures are not for complete months, the average can be assumed to be a little higher.) To achieve the March 2019 target, 2.25 million households were required to be electrified every month. However, with four months already passed, the average number of households required to be electrified per month has gone up to 2.8 million.

On November 16, 2017, the MoP launched the Saubhagya web portal for monitoring household electrification and providing real-time updates on household electrification (state, district and village-wise) as well as village electrification camps. Under the scheme, discoms are required to organise camps in individual villages or a cluster of villages to facilitate on-the-spot filling up of application forms and the requisite documentation to expedite the release of electricity connections to households. All states have been asked to announce the schedule of these camps to create awareness about the one-stop facility for getting connections. In December 2017, the government sought Parliament’s approval for an additional expenditure of Rs 10,338 million, to be utilised in 2017-18 for the creation of capital assets and grant of subsidies. 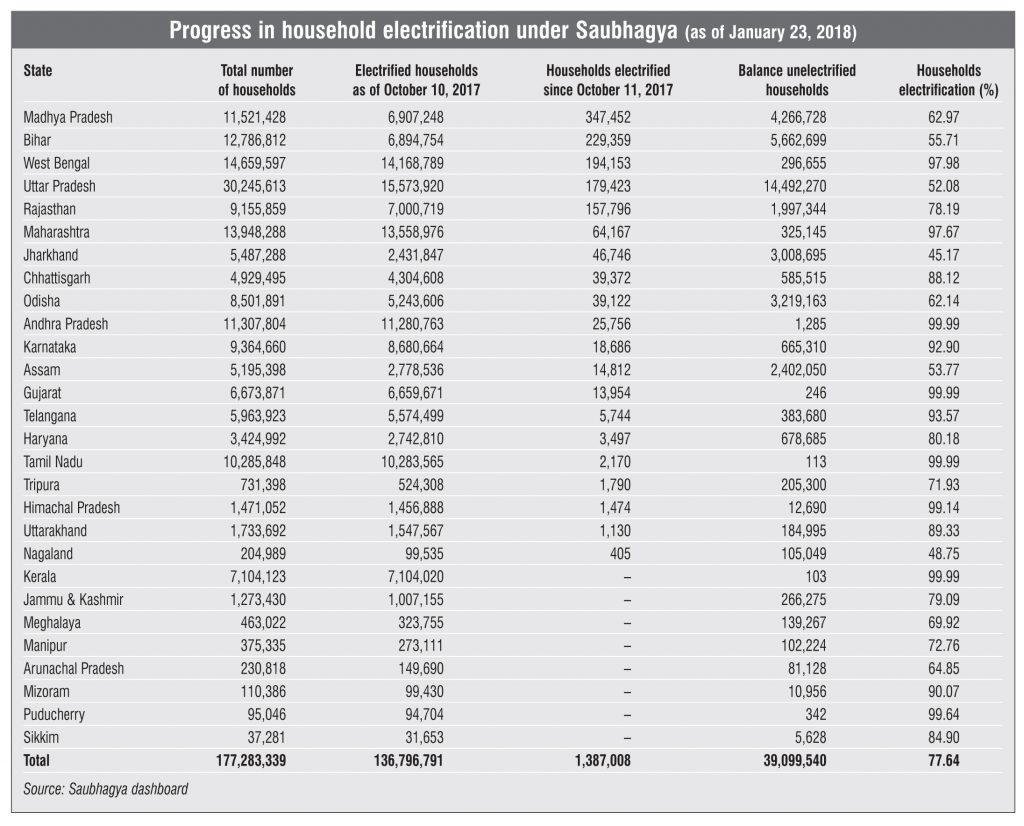 The government has set a tight timeline for the implementation of the scheme. It will have to electrify about 2.8 million households every month in order to achieve the target set under the scheme.

Further, there is no upfront allocation of funds under the scheme to state discoms. The upfront allocation of funds would have led to better planning and execution of the scheme considering the stringent timelines. Besides, there is a likelihood of shortfall in funds provided under the scheme as the cost of providing electricity connections works out to around Rs 4,080 per household as per the government’s budget, which is highly inadequate. Further, the implementation of the scheme requires a large workforce. In addition, there is a lack of motorable roads in rural areas, which can cause delays in the electrification process.

The target of providing electricity access to about 40 million households across the country by March 2019 is, no doubt, ambitious. Over and above that, the government has set itself an internal deadline of December 2018. In light of these tall targets, it will need to address the implementation challenges and speed up the electrification process.