The Ujwal Discom Assurance Yojana (UDAY), launched in November 2015, has demonstrated promising results so far. Under the scheme, the discoms of participating states and union territories (UTs) reported a significant reduction of 48 per cent in their financial losses in 2016-17. The power minister recently informed the Lok Sabha that the financial losses of the UDAY discoms reduced from Rs 515.9 billion in 2015-16 to Rs 348.27 billion in 2016-17. The improvement in discom finances can be attributed to a reduction in the interest cost following to the takeover of 75 per cent of discoms’ debt by the state governments, as envisaged under the scheme.

However, aggregate technical and commercial (AT&C) loss reduction has been inconsistent and losses remain significantly high in key states like Bihar, Uttar Pradesh, Haryana, and Jammu & Kashmir. While AT&C losses (for discoms under UDAY) reduced from 24 per cent in 2015-16  to 20.2 per cent in 2016-17, they have increased to about 22.73 per cent in February 2018 (as per the latest data on the UDAY portal, which covers data for 24 states). While there has been a significant improvement in states including Himachal Pradesh, Manipur, Jharkhand, Haryana, Goa, Rajasthan and Uttarakhand, states such as Uttar Pradesh, Tamil Nadu, Punjab, Madhya Pradesh and Andhra Pradesh witnessed an increase in losses. In this scenario, it is difficult to achieve the AT&C loss target of 17 per cent for 2017-18. Besides, there have been modest tariff revisions in states, much lower than the targets stipulated under the scheme.

As per the Economic Survey 2018-19, the states need to focus on reducing their AT&C losses and increasing their tariffs. Further, sector experts are of the view that the scheme cannot resolve the distribution segment’s issues merely by the takeover and restructuring of debt, There is a need to reduce AT&C losses and bridge the gap between the average cost of supply (ACS) and the average revenue realised (ARR). Renewable Watch presents an update on UDAY’s progress so far…

So far, 27 states and four UTs have signed MoUs with the central government under UDAY. While 16 states and UTs have signed MoUs for overall improvement, 15 have joined the scheme only to improve the operational performance of discoms. In addition, the Ministry of Power (MoP) has accepted the Lakshadweep Electricity Department’s proposal to join UDAY though an MoU is yet to be signed.

The only states/UTs that have not joined the scheme are West Bengal, Odisha and Chandigarh. However, Odisha intends to participate in operational efficiency improvement. Although the scheme is open to the remaining states and UTs, the relaxation of the fiscal responsibility and budgetary management limit for states ended on March 31, 2017.

Under UDAY, the state governments are required to take over 75 per cent of the discoms’ debt and issue bonds to the lenders. The remaining debt has to be restructured/paid back through bonds issued by the discoms. As of September 2015, the total debt of state-owned discoms stood at Rs 3.95 trillion. Of this, the UDAY states account for 97 per cent or Rs 3.82 trillion.

The state discoms have made notable progress on the bond issuance front. Bonds worth Rs 2.69 trillion have to be issued under the scheme. So far, 16 states/UTs have issued UDAY bonds totalling Rs 2.32 trillion, indicating an overall progress of about 86 per cent, which has improved the liquidity profile of the discoms. Reportedly, Tamil Nadu Generation and Distribution Corporation (TANGEDCO) is planning to issue bonds worth Rs 75.05 billion on a private placement basis.

States including Goa, Rajasthan, Uttar Pradesh and Tamil Nadu recorded a significant reduction in the ACS-ARR gap between 2015-16 and 2016-17. However, Karnataka, Jharkhand, Kerala and Assam witnessed an increase in the gap. Meanwhile, Himachal Pradesh, Chhattisgarh and Gujarat have already achieved the target of “zero” ACS-ARR gap.

At the meeting of power ministers held in December 2017, it was highlighted that if the states reduce their establishment costs to the average level, it would lead to savings of Rs 100 billion. In fact, many states are of the view that the norms for establishment cost for providing electricity per 1,000 consumers need to be worked out and the Central Electricity Authority is working on a report for the same.

Under UDAY, discom losses have been reduced significantly. The debt takeover by state governments and the subsequent reduction in debt servicing rates from 11-12 per cent to 7-8 per cent have helped achieve cost savings. In addition, banks have restructured and issued bonds for the remaining loan portfolio of discoms, thereby reducing the interest burden by 3-5 per cent. Their income has also increased owing to tariff revisions and operational loss reduction. As a result, many state discoms are confident of achieving break-even by 2019. 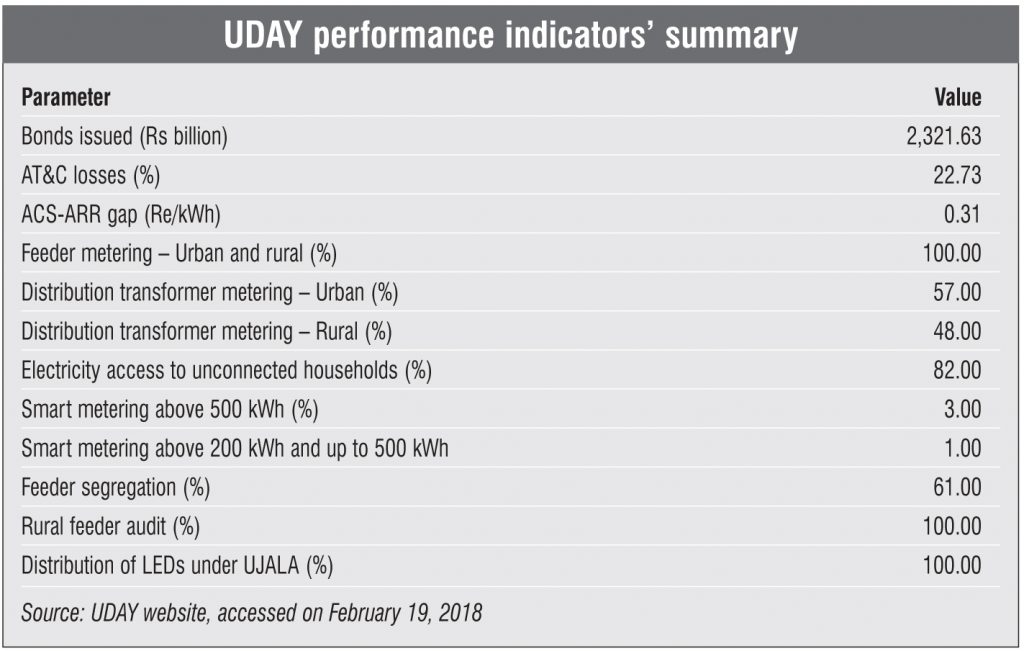 So far, 16 states have increased tariffs for 2017-18. These are Andhra Pradesh, Assam, Bihar, Chhattisgarh, Haryana, Karnataka, Kerala, Madhya Pradesh, Manipur, Meghalaya, Mizoram, Nagaland, Punjab, Sikkim, Uttar Pradesh and Uttarakhand. Of these, only five states – Bihar, Uttarakhand, Madhya Pradesh, Karnataka, Gujarat and Assam – have notified tariff hikes equal to or greater than the targets set under UDAY. Meanwhile, the discoms of major states like Tamil Nadu, Rajasthan, and Jharkhand have not yet revised their tariffs, thus violating their UDAY commitments.

While feeder metering levels stand at 100 per cent, distribution transformer metering is lagging behind at 57 per cent (urban) and 48 per cent (rural), as of February 2018. Meanwhile, on the smart metering front, only about 3 per cent of the targeted number of meters has been installed so far. Only about 0.15 million smart meters have been installed against the total target of over 5 million in the above-500 kWh consumption category, and 0.17 million meters (against a target of 17.5 million) have been installed in the 200-500 kWh consumption category.

Issues and the way forward

A key challenge in the implementation of UDAY is the discrepancy in the provisional data submitted by states and the final audited data. This leads to an inaccurate analysis of discom gains accrued under the scheme. Another challenge is the increase in pending electricity dues of government departments to discoms. As per the latest available estimates, the cumulative dues stood at Rs 314.65 billion, which should have been cleared by October 2016.

Further, in many states, the gains under UDAY were largely financial, owing to the decline in interest payout and there is significant scope for improvement in operational efficiency. To this end, the MoP proposed an amendment to the Tariff Policy, 2016, to ensure that AT&C losses beyond 15 per cent are not compensated by increase in tariffs from January 2019 onwards. Net, net, though UDAY has initiated positive reform in the distribution segment, the state governments and discoms need to maintain this momentum and take steps to achieve the desired turnaround.