Microgrids have been a game changer in the rural electrification space. In a coal-dominated energy sector, the decentralised way of energy generation through easily available renewable resources such as solar, wind and biomass has yielded exceptional results. Meanwhile, companies setting up and operating microgrids to provide reliable power at low prices have received a positive response from the rural communities. Gram Oorja Solutions Private Limited is one such company that aims to commercialise viable and locally available renewable energy solutions in rural areas.

Since its incorporation in 2008, the company has evolved from working specifically with individuals and institutions to adopting a more community-based approach. According to Sameer Nair, co-founder and director, Gram Oorja, “Scaling up to community-level work has created a space for Gram Oorja to work more closely with local organisations that raise funds primarily through corporate social responsibility and programme-specific activities. This has led to many rural businesses directly engaging with the company.”

With projects spread across the country, Gram Oorja mainly focuses on 13 districts across four states – Maharashtra, Jharkhand, Karnataka and Madhya Pradesh. The company’s offerings include 4-18 kWp solar photovoltaic (PV) and hybrid microgrids, solar water pumps for domestic and irrigation purposes and biogas-based cooking grids for communities comprising 40-150 households. The company’s small team has installed 38 microgrids across three of the four states, and is implementing 17 more microgrids, most of which are expected to be completed by April 2018. In addition, it has set up more than 80 solar pumps and two community biogas-based cooking grids. Over the past one year, Gram Oorja has completed over 55 projects worth more than Rs 100 million.

The company has also been working with institutions to meet their energy requirements. It also provides consultancy services to several organisations and helps them devise energy solutions. In October 2017, the company helped design and develop a 55 kW solar power plant on the premises of the Venture Center at the CSIR-National Chemical Laboratory, in Pune.

Gram Oorja is a family-owned company, which operates without any institutional investment. It has associations with non-governmental organisations such as Pragati Pratishthan and the Sanjeevani Seva Trust. For its projects, Gram Oorja has partnered with Bosch Solar Energy AG, Sunlit Future, Smart Hydro Power, etc. and has received sponsorships from GIZ, Bank of America, the Prayas Energy Group, Shakti Foundation, ICICI Bank, etc. 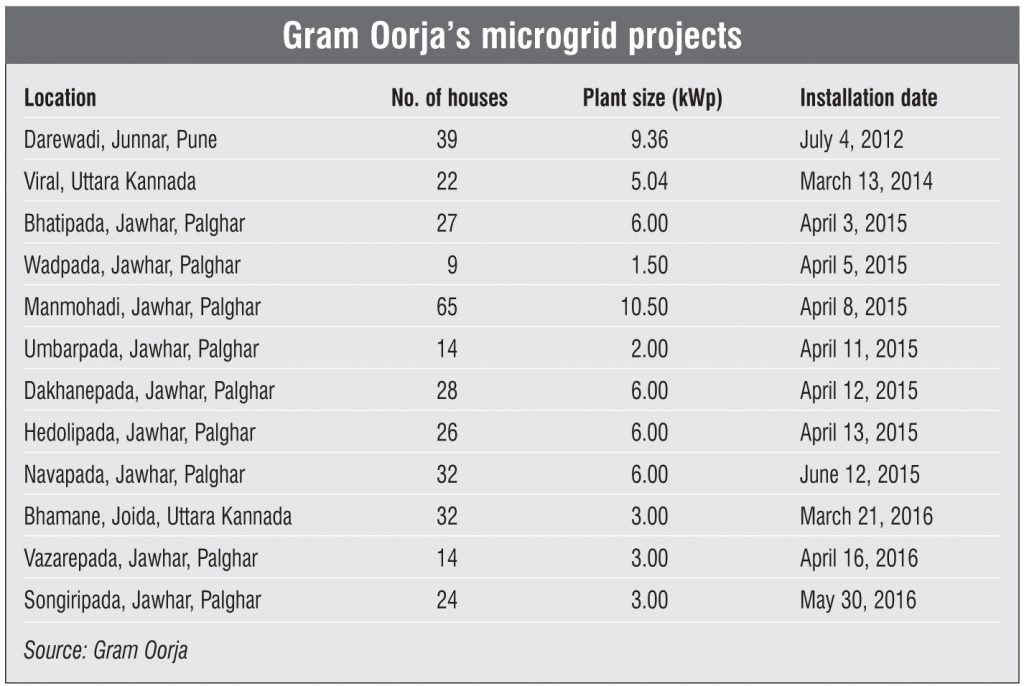 In July 2012, the company completed a microgrid-based project in Darewadi, Maharashtra. Due to its remote location, setting up transmission lines and procuring equipment to provide a grid connection in the area was very difficult. Gram Oorja, in association with Bosch Solar Energy AG, set up a 9.36 kWp solar microgrid as a pilot project for providing electricity to 200 people in 39 households. The project was set up using 39 units of Bosch’s monocrystalline modules rated at 240 Wp each at a total cost of about Rs 300,000. As a result of this initiative, the villagers now have 24×7 electricity operating not only lights and fans, but also sufficient for at least 10 television sets, two computers, two water pumps and a flour mill. The energy consumption is metred and charged, and the revenue generated is used for the system’s operations and maintenance (O&M). Gram Oorja eventually transferred the ownership of the solar plant and the microgrid to the village energy committee, Vandev Gramodyog Nyas, thus making the community self-reliant in meeting their electricity needs.

In March 2014, the company set up a pilot biogas grid with a 400 cubic metre capacity at Kolvan, Pune, in partnership with GIZ. The plant is based on dry gas digestion technology, which uses napier grass as feed material to generate and supply biogas to nearby households and mid-day meal preparation centres for clean cooking. The consumers are equipped with gas flow meters and are charged according to their biogas usage. A local energy committee is responsible for collecting the monthly charges, which are used to fund the O&M of the plant. 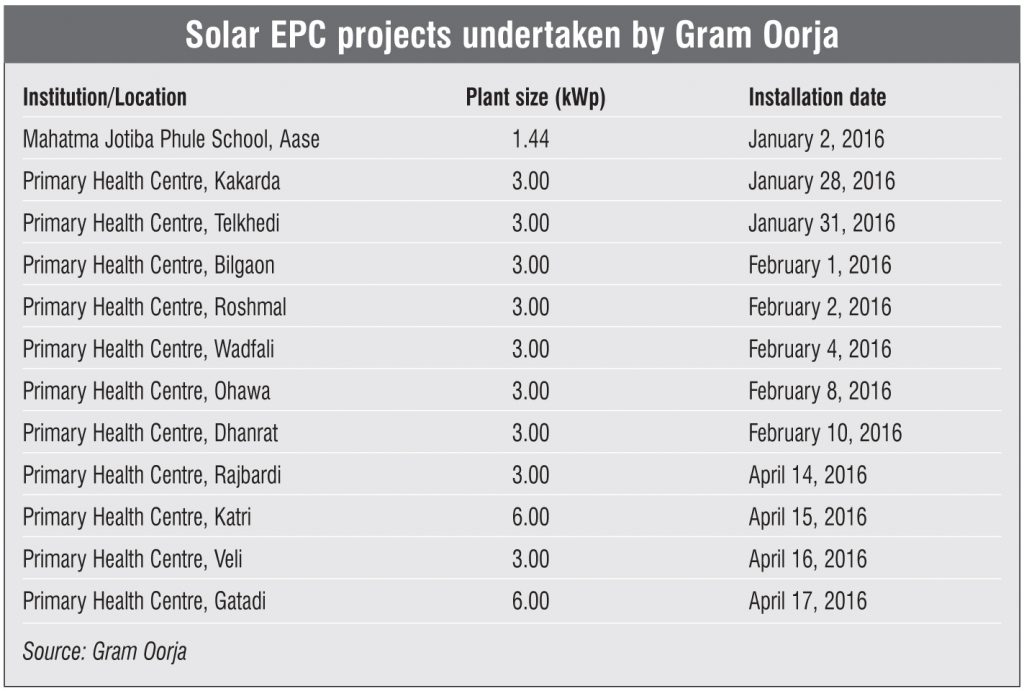 More recently, villages in Gumla district, Jharkhand, were electrified through 42 kWp of solar PV systems. The projects, developed in association with the Bank of America, have powered over 180 households since their commissioning in December 2016 and March 2017.

Over the next five years, Gram Oorja aims to complete a total of 1,000 projects in Maharashtra and scale up its biogas capacity across states. With regard to investments for new projects, Nair says that the current growth is internally driven and there is no immediate requirement for equity investments.

However, the off-grid segment has been facing several challenges and Gram Oorja has been exposed to some of them. The market is still very small and is concentrated in specific areas of developing countries. Moreover, some communities in the key last-mile locations that are ideal for microgrid development cannot afford electricity. In addition, microgrid operators face geographical challenges.

Another issue pertains to the government’s grid expansion schemes that have reduced the need for biomass- or solar-based microgrids. This has led to uncertainty among developers regarding the requirement and feasibility of such technologies. However, Nair is not worried about such schemes having a significant impact on the company. “Gram Oorja is a customer-centric organisation and if grid extension is the appropriate solution for the customer, then there is no argument against the same,” he says.

That said, the company is also taking strategic steps to balance its risk profile. It has recently diversified into the engineering, procurement and construction (EPC) space for small-scale solar PV, biomass and solar pumping solutions. By doing so, it is likely to benefit from the tall targets set for solar energy and solar pumps by the government and the growing policy push to promote these segments.