Renewable energy is paving the way for a sustainable world order, with nearly all countries from Asia to the Americas looking to transition to an energy system based on renewables. The International Renewable Energy Agency (IRENA) supports them in this endeavour by providing a platform for international cooperation. The decisions of IRENA, which currently has 153 member countries, is governed by its assembly that includes heads of states, ministers, government officials as well as representatives from the private sector, civil society and other international organisations. It convenes an annual meeting to discuss the global renewable energy agenda and take concrete steps to accelerate the transition to a sustainable global economy. In January 2018, the assembly conducted its eighth meeting to decide IRENA’s work programme, the budget for the 2018-19 biennium, and the medium-term strategy for 2018-22. It also released a comprehensive report on renewable power generation costs for 2017 and the outlook for 2018.

For the biennium 2018-19, IRENA has estimated an overall core assessed total budget contribution of $43.1 million from member states, a core non-assessed contribution of $9.12 million and another $10.2 million from Germany for IRENA’s innovation and technology centre in Bonn. The US, Japan and China will be the largest contributors to IRENA for the period, providing $4.6 million, $2.3 million and $1.8 million respectively. India is expected to contribute about $175,000.

As the world stands together at the cusp of an energy transition, intergovernmental cooperation is essential to increase information and technology exchange, reduce overall costs and improve the financing conditions in the market. IRENA’s medium-term strategy is directed towards meeting these goals. It will focus on promoting renewable energy, especially in developing economies, and highlighting its economic and social benefits.

Mobilising quality finance for renewable energy projects across the world is largely dependent on the development of bankable projects, lowering of existing barriers and understanding investment risks. Given that the private sector is likely to finance a large part of the upcoming renewable energy capacity, the focus should be on attracting private investment while providing executable mitigation strategies and mechanisms. IRENA’s medium-term strategy for 2018-22 focuses on channelising investments towards renewable development and supporting technological innovation over the next five years.

The agency’s strategy also takes into consideration the significance of the period 2018-22 for the advancement of climate objectives such as the United Nations Sustainable Development Goal7 (SDG7). IRENA’s strategy envisages providing continuous support for the realisation of SDG7, which also has implications for sectors such as food, water, education, health and employment. Its strategy understands the ripple effect of renewable energy on economic, social and environmental barometers and provides the requisite knowledge to countries.

The key objectives of IRENA’s Medium-term strategy for 2018-22 are as follows:

IRENA released a detailed analysis of the generation costs of various renewable energy sources in 2016-17 across the world. With the steady fall in generation costs, renewables have become a mainstream source of energy in some countries. During the year, tariffs for traditional renewable energy sources such as wind, bioenergy and hydropower as well as the less explored geothermal energy declined to the same range as fossil fuel-based power, estimated at $0.05-$0.17 per kWh depending on the fuel and country. The global average levellised cost of electricity (LCOE) stood at $0.05 per kWh for new hydropower plants commissioned in 2017, and at $0.06 per kWh for new wind power plants. The LCOE for new bioenergy and geothermal projects was slightly higher at $0.07 per kWh. The fall in solar power costs has been the most remarkable, from about 73 per cent since 2010 to $0.10 per kWh. In fact, many countries have also withdrawn financial support from the segment. Offshore wind power cost also declined, albeit at a slower rate, to stand at $0.14 per kWh. Meanwhile, concentrating solar power cost stood at $0.22 per kWh.

According to IRENA’s analysis, there are three primary drivers responsible for the cost reduction – technology improvements, competitive procurement and the emergence of large international developers. Technological improvements in wind and solar have led to significant cost reductions as well as increased installations. The wind power segment has benefited from bigger wind turbines with higher hub heights, while new solar cells have achieved unprecedented efficiencies. Meanwhile, real-time updates and big data have enhanced predictive maintenance and reduced downtime, thereby lowering operations and maintenance costs. As technologies become mature, the risks associated with them diminish, increasing investor interest and reducing the cost of capital. Further, many countries including India are opting for competitive bidding as a means of tariff determination and project allocation. Also, large international developers with deep pockets and insatiable appetites are entering the renewables’ space, bringing their global experience to blooming markets along with international capital at low costs. 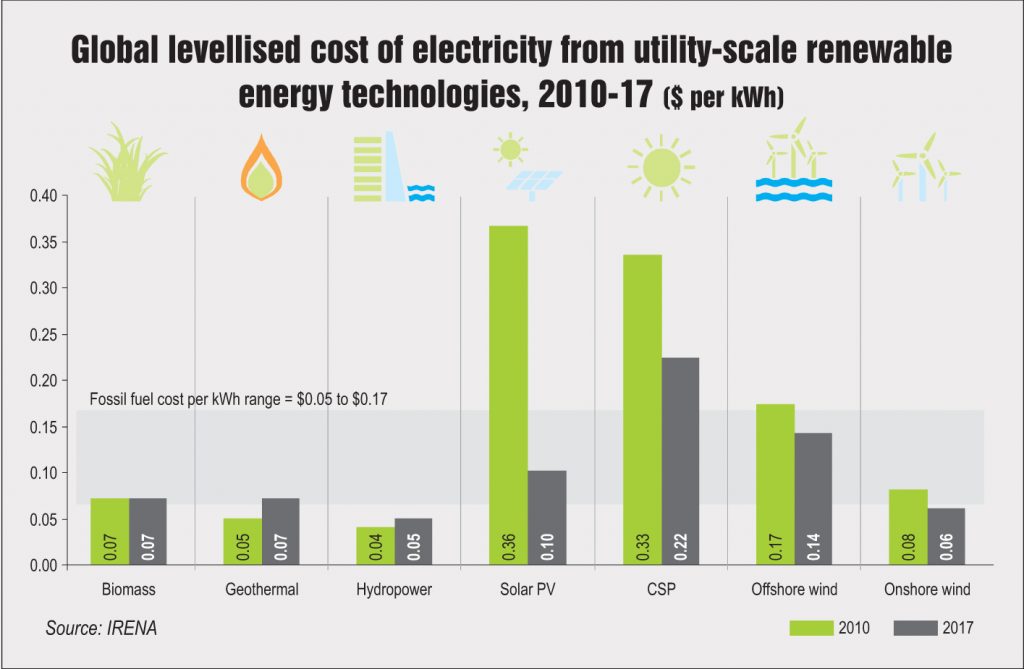 Over the past two years, the auction prices for solar photovoltaic (PV) have declined in emerging renewable energy markets such as Abu Dhabi, Dubai, Mexico, Peru, Chile, Saudi Arabia and India (where prices have fallen to Rs 2.44 per kWh or $0.037 per kWh), indicating a trend towards sub-$0.03 per kWh LCOE across the world in 2018. IRENA expects that power generation from renewable sources will remain consistently cheaper than that from fossil fuels unlike the fluctuating cost pattern exhibited currently.

Wind power is one of the most competitive renewable energy sources, with record low auction results witnessed in Brazil, Germany, Canada, India, Mexico and Morocco. Analysing the trends outlined by IRENA, it is likely that the current LCOE of wind power at $0.06 per kWh will fall to $0.05 per kWh by 2020. Recent offshore wind auction results in Germany, the UK, the Netherlands and Belgium indicate that offshore wind costs would fall to $0.06-$0.10 per kWh by 2020. 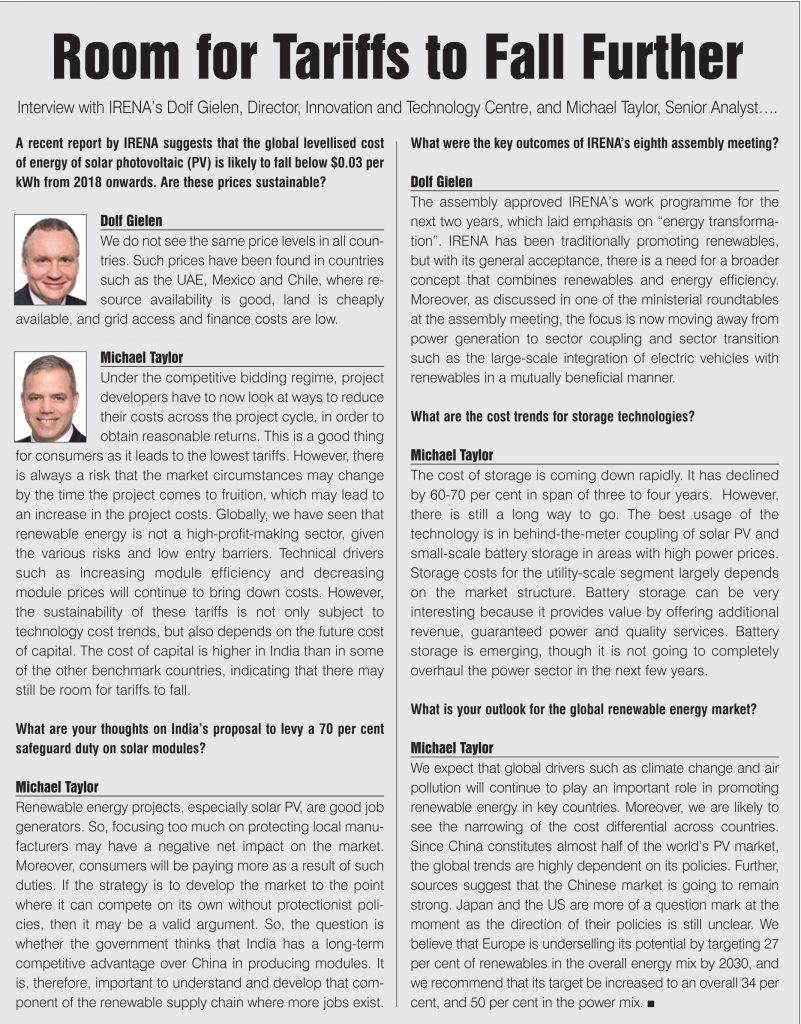 According to IRENA, the decrease in generation costs could help unlock many economic strategies previously deemed expensive. Curtailment, for example, seen as the bane of the renewable energy sector, could become a rational decision considering project and generation economics in several countries, barring emerging markets such as India. Moreover, with low cost of generation, storage of power becomes an increasingly favourable decision. Combined with the emerging trend of electric vehicles with their demand for high instantaneous power, storage could lead to an interesting economic dynamic.

However, the report cautions against the increased challenges of integrating variable and intermittent renewable energy into the grid, which could lead to uncertainty in grid operations and additional costs. This would be even more pronounced if the pace of grid modernisation and transmission system expansion is unable to match the rate of renewable capacity addition.