There are about 90 million electric pumps and 9 million diesel pumps installed across the country. However, about 50 per cent of the net sown area is still not irrigated. Power cuts are common throughout the rural belt of the country where most of the agricultural land is located. Many farmers resort to diesel pumps as a substitute for poor and inadequate power supply. Moreover, the electricity supplied to agricultural consumers is heavily subsidised, with the total subsidy bill running into billions of rupees.

In this scenario, solar-powered irrigation could be an ideal solution for the problems of both farmers and the government. Besides, it is pollution free, unlike diesel pumps, thus mitigating environmental concerns. According to Amitabh Kant, chief executive officer, NITI Aayog, “Access to reliable and affordable irrigation is one of the most important enablers in increasing agricultural productivity and farmer incomes. Solar pumps can augment agricultural output by fulfilling unmet irrigation needs while reducing the burden of subsidies on the government and increasing farmers’ resilience to climate change.”

The government has set a target to install 1 million solar pumps by 2021. As per the Ministry of New and Renewable Energy (MNRE), only 142,000 solar pumps (14.2 per cent of the national target) had been installed in the country as of November 2017. The government has been actively encouraging the uptake of solar pumps through various programmes. The MNRE provides a capital subsidy to farmers through its empanelled channel partners.

This is in the form of central financial assistance ranging from Rs 17,000 per Horse Power (HP)(on a benchmark cost of Rs 85,000 per HP for a 3-5 HP Alternating Current [AC] pump) to Rs 30,000 per HP (on a benchmark cost of Rs 120,000 per HP for a Direct Current [DC] pump of up to 3 HP capacity). A popular central government scheme for providing assistance to farmers through the National Bank of Agriculture and Rural Development (NABARD) was discontinued in March 2017. Under this scheme, 40 per cent of the total amount was provided as capital subsidy to farmers by NABARD, 40 per cent loan was made available for a tenor of 10 years, and 20 per cent was required to be paid by the farmers as down payment for the solar pumps. In addition to the central government’s subsidy scheme, states like Rajasthan, Haryana and Tamil Nadu provide subsidies to farmers. The Maharashtra government, for instance, has released the Mukhyamantri Agricultural Solar Feeder scheme, under which instead of distributing individual solar pumps to farmers, agricultural feeders will be powered through solar energy.

The most common business model for the installation of solar pumps is community-based solar irrigation, wherein four to five farmers form a joint liability group to buy one solar pump through a joint loan from the banks. This distributes the burden of upfront financing and reduces the risk of payment defaults for banks. Owing to these factors, this model has become popular in many parts of the country.

In another model, water is treated as a shared service and drawn through a single solar pump, which is owned and operated by a renewable energy service company (RESCO). This is an ideal way to manage irrigation issues, particularly in areas where the agricultural land is very fragmented. This solves multiple problems including the risk of payment defaults for banks and upfront capital cost requirements for farmers, with farmers having to pay a minimum charge for water usage to the RESCO.

Further, portable pumps, owned and operated by RESCOs, are being used in many villages. The pumps can be used on a rotation basis by farmers, who have to pay a minimum cost to the RESCO. At some places, the RESCO can hire a service developer at the grassroots level to operate the pump and ensure timely collection of revenue. In rural areas that are not connected to the grid, solar pumps owned and operated by RESCOs are being used to form micro-grids, wherein the surplus power is used for various applications such as bag stitching, threshing, grinding and lighting. In Assam, small solar pumps, mainly used for vegetable farming, are being used for domestic lighting.

Farmers with grid-connected solar pumps are also selling surplus solar power to the grid, thus creating an additional source of income. For example, the Dhundi Solar Pump Irrigators’ Cooperative Enterprise in Gujarat has six solar pumps, which are used for irrigation and the surplus power is sold to the distribution utility at a rate of Rs 4.63 per unit under a 25-year power purchase agreement. In addition, the International Water Management Institute-Tata Trust, and the Climate Change, Agriculture and Food Security programmes offer green energy bonus and groundwater conservation bonus to farmers. 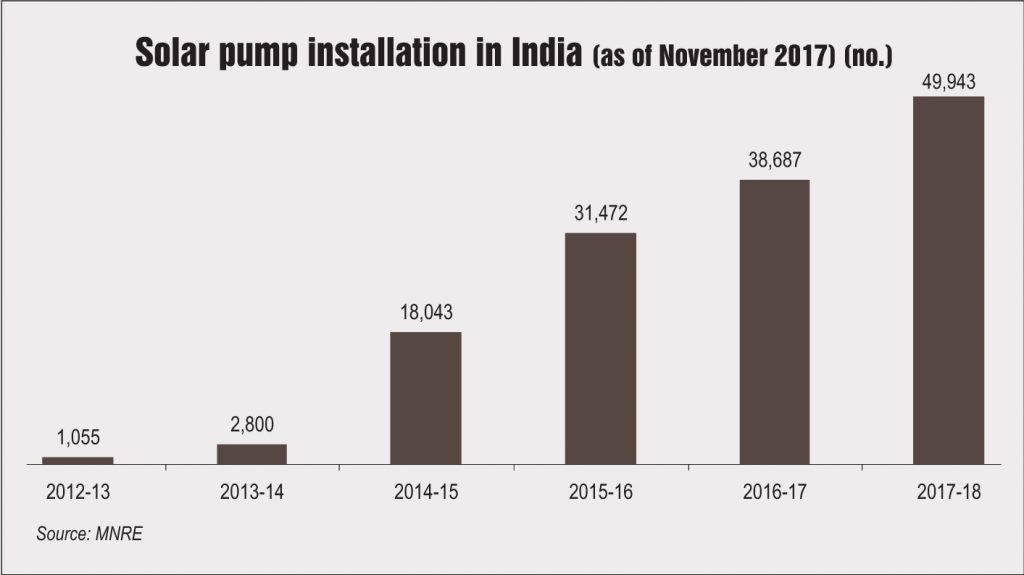 The reasons for the slow uptake of solar pumps in India are high capital costs as compared to traditional pumps and lack of awareness amongst farmers. As per a Council on Energy, Environment and Water study in Uttar Pradesh, of the 1,600 farmers, only 27 per cent has heard about solar pumps, only 14 per cent has seen a solar pump, and only 2 per cent are aware of the government schemes for solar pumps.

There is a need to streamline the process of availing of financial assistance and to make the availability of soft loans easier for farmers. Subsidy disbursement to beneficiaries is also very delayed while banks often treat solar pumps as a bad investment. In this context, it is important to not only create awareness amongst farmers but also undertake capacity-building exercises for rural lending institutions.

The application process is very time-consuming and complicated in some states and there is often a long waiting period, which discourages farmers from investing in solar pumps. Thus, small farmers shy away from investing in solar pumps, a technology that they do not understand completely, and only those with the required financial capability deploy these systems. Further, trained manpower to operate and service solar pumps is lacking in rural areas.  There are also concerns regarding thefts and tampering of modules. The unavailability of spare parts in villages leads to delays in irrigation, thus compelling the farmers to go back to their older irrigation methods. Hence, apart from awareness generation, state agencies need to focus on skill development of farmers to make them more self-reliant. Solar pumps also discharge less water than electric or diesel pumps, thus increasing the time required to irrigate the same patch of land.

Besides being intermittent in nature, solar energy is available for only a limited number of hours during the day, giving very little time to farmers to irrigate their fields. In such a scenario, if a single solar pump is being shared by a group of farmers, the time available to each farmer gets further divided. Meanwhile, groundwater depletion has become a major cause for concern, with some areas becoming water scarce due to unchecked and unsustainable irrigation practices. Farmers are not aware of micro-irrigation techniques like drip irrigation that can significantly save groundwater resources. Environmental experts believe that increased deployment of solar pumps may lead to water wastage as farmers may keep the water running given the freely available solar resource. However, promoters of solar irrigation feel that farmers can be educated on the merits of water conservation. They also feel that with the implementation of remote monitoring technologies, local agencies can keep a track on water usage by farmers and warn them if the water usage is not judicious.

All state nodal agencies need to focus on raising awareness amongst farmers about the benefits of solar pumps, in addition to ensuring efficient implementation of government schemes. This can be done by demonstrating solar pumps at the village level. Meanwhile, the state governments need to implement schemes that target small and marginal debt-ridden farmers who suffer the most due to inadequate irrigation. Innovative business models that address the problems of farmers without burdening the state governments and discoms are needed. Several private and government enterprises have started working in this direction by engaging grassroots-level associations and non-profit organisations to ensure capacity building of the farmers and lending agencies alike, and scaling up solar pump deployment in a sustainable manner.

Based on discussions at the “National Dialogue on Solar for Irrigation in India” organised by the Council on Energy, Environment and Water (CEEW) and the Shakti Sustenable Energy Foundation (SSEF) 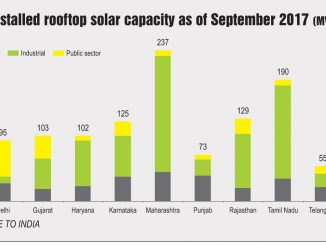 July 2018
The rooftop solar segment in India has witnessed sluggish growth over the past year, with the installed capacity reaching only 1.2 GW as of June 2018....
More 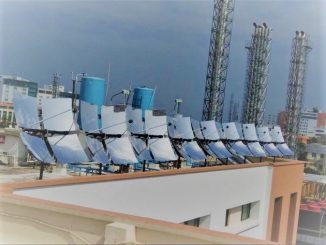 August 2018
By Ashay Abbhi The growth of solar thermal has been restricted as compared to the solar photovoltaic (PV) technology due to factors such as low off-ta...
More