With over $114 billion worth of investments in 2016, solar photovoltaic (PV) overtook wind energy to become the fastest growing renewable energy technology in the world. The installed solar PV capacity reached 303 GW globally by end-2016, with about 75 GW of capacity added during the year. As per DNV GL, at this rate, the global solar PV market would reach double the current size by 2021, with the installed capacity ranging from 550 GW to 650 GW.

About two-thirds of solar PV installations in the world were carried out in Asia in 2016, with China taking the lead in both generation capacity and manufacturing capacity additions. Globally, India held the fourth position, after China, the US and Japan. A key reason behind the phenomenal increase in solar PV installations is the decline in PV module prices, which has made solar PV a cost-competitive source of energy for power producers. Favourable government incentives and regulations are also driving the solar PV markets.

With the global solar PV capacity growing at a compound annual growth rate of 40 per cent from 2010 to 2016, there was a manyfold increase in module production capacities as well. During 2016, around 80 GW of solar PV cells and 83 GW of solar PV modules were manufactured, with a significant increase of 29 per cent and 33 per cent respectively over the past year. China took the lead in module production and shipments, accounting for about 68 per cent of the global module production in 2016. The rest of Asia produced about 14 per cent of the total modules, while the share of Europe and the US decreased to 4 per cent and 6 per cent respectively in 2016. Around 50 per cent of the global module shipments came from the top 10 module manufacturers in 2016. Jinko Solar took the lead followed by Trina Solar, Canadian Solar, Hanwha Q cells and JA Solar.

For solar PV developers, lower capital expenditure due to declining equipment costs, and improvements in equipment efficiencies and capacity factors were the key positives. The significant decline in solar PV module prices can be attributed to the increase in market competition and rise in production capacities. The average module prices fell by almost 2.9 per cent during 2016, particularly in China, to $0.31-$0.32 per watt for utility-scale solar plants.

However, module manufacturers worldwide registered very low margins as they had to decrease their prices to match the rates offered by Chinese module manufacturers. To offset the high import taxes prevalent in many countries, Chinese players have set up manufacturing units in these countries. It is interesting to note that around one-third of the modules produced by the top 10 manufacturing companies were made up of solar cells produced by a third party, mostly based in Korea and Taiwan.

According to the Ministry of New and Renewable Energy, the installed solar PV capacity in India stood at 15.6 GW as of October 2017, with about 3.6 GW of capacity added during March-October 2017. In line with global trends, the Indian solar PV module market is also dominated by Chinese module manufacturers, with Trina Solar taking the lead with a 16 per cent market share. According to a recent report by BRIDGE TO INDIA, Trina Solar has overtaken Canadian Solar to be the top module manufacturing firm in India this year, while JA Solar and Canadian Solar follow next with 9 per cent share each. Domestic manufacturers like Waaree Energies and Tata Power Solar are far behind foreign players with 3 per cent and 2 per cent share respectively. Notably, Jinko Solar, which was the global market leader in 2016, has only a 5 per cent market share in India.

Indian module manufacturers face strong competition from low-priced Chinese modules in the market. Currently, module prices in India have reduced drastically due to oversupply of modules from China in the Indian market. However, there is some hope for local domestic manufacturers as China has to meet its own ambitious targets and may cut back the supply of modules. This would slightly increase module prices making the solar PV market conducive for domestic module manufacturers. The Indian government is also looking to impose certain import duties on modules being imported from China and Malaysia, which would prove to be a respite for domestic manufacturers. However, as a result, solar plant developers in India, who have quoted record low tariffs to win capacities in solar power auctions, might have to reconsider their capital expenditure and cost economics. 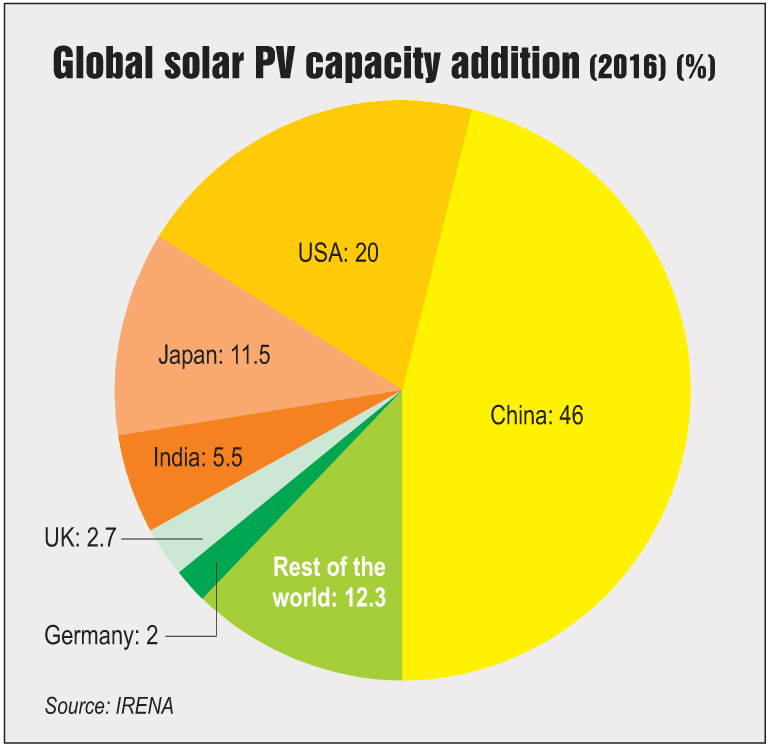 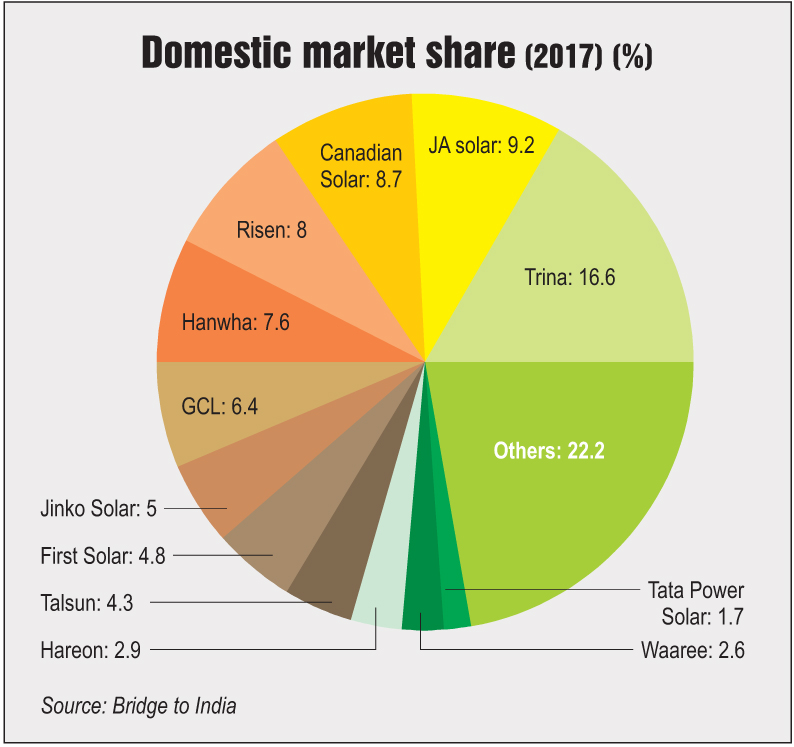 Crystalline cells have seen several technological advancements, which include reduction in wafer thickness to save on material costs while ensuring ideal performance of the cells. Silicon usage has decreased from 16 gm to 6 gm per watt peak in a span of 12 years, and is declining further. On the other hand, the performance ratio has increased from just 70 per cent in the 1990s to 80-90 per cent at present, with relatively low variance.

There have been several advancements and innovations in the solar industry propelled by growing customer demands. This has significantly reduced the production costs of cells and modules, while making them more efficient. Meanwhile, there has been an increase in research and development (R&D) activities to improve the manufacturing process and the performance of modules. In 2016, many companies like SolarWorld in Germany and REC Solar in Norway upgraded their production lines to passivated emitter rear cell (PERC) technology. PERC does not absorb solar rays in the module; instead, it reflects solar rays back to the rear of the solar cell, which improves the efficiency and performance in low light conditions.

In recent years, manufacturers have been increasing the number of busbars to reduce internal resistance and enhancing light trapping techniques to increase power generation. Further, a lot of research has gone into improving efficiencies of perovskite solar cells. These cells entail relatively low production costs and come under the new generation of solar cells. Recently, Duke University introduced a new manufacturing method for producing high-powered perovskite cells, while Oxford PV is ramping up the production of its perovskite technology. All these innovations will ultimately lead to efficiency gains, thereby reducing the number of modules required for a particular capacity installation. This will further reduce module costs. 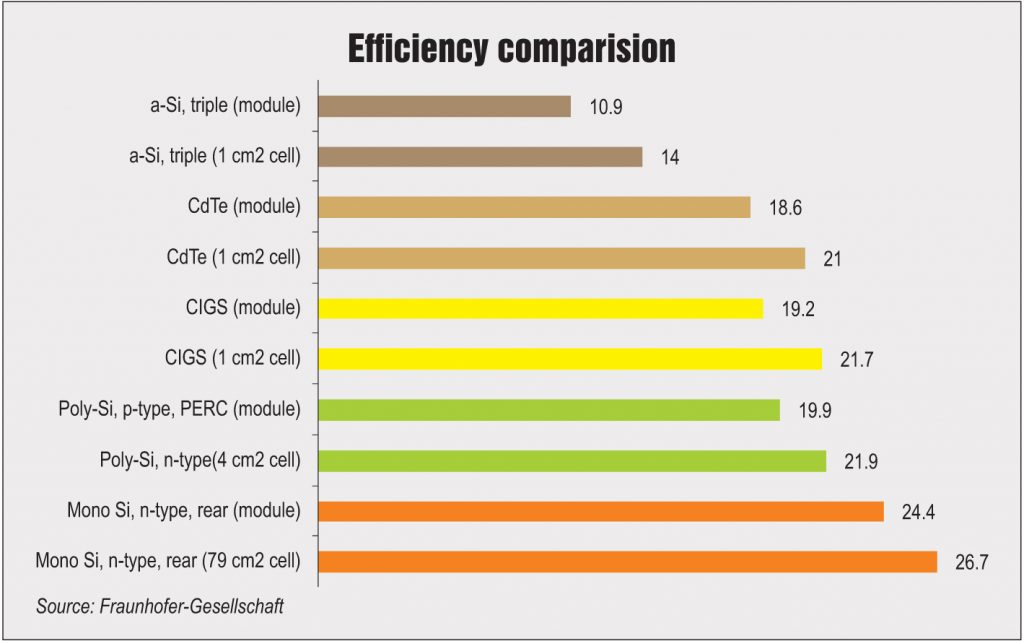 Meanwhile, R&D is being carried out in solar panel recycling although there is very less demand for these panels. However, a growing number of initiatives are being taken by leading manufacturing companies in countries across the globe to utilise old and discarded solar PV panels for the production of new ones. For example, NPC and Hamada from Japan have collaborated to recycle 80 per cent of the panel materials. Further, Australia-based Reclaim PV and several other companies are advancing their production processes to ensure little or no waste and maximum recycling. The Japan government has issued solar PV recycling guidelines while the European Union has announced regulations for solar PV-related waste. 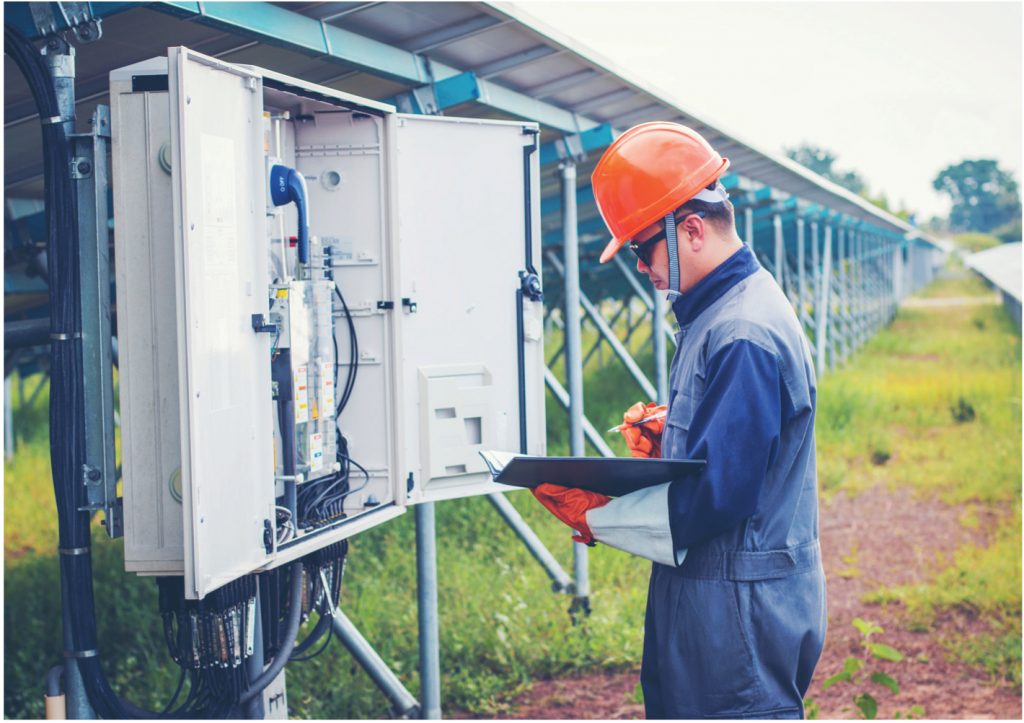 It is expected that solar PV technologies will provide a third of the world’s electricity by 2050, with China and India in the lead. Meanwhile, the share of Europe and North America in global solar PV capacity will decline. Already utility-scale solar plants have become the cheapest power generation source in many countries, and it is predicted to stay that way for a long time, with competitive bidding on the rise. Further, owing to rapid technological advancements and increased requirement of cost-effective clean energy, the solar cell and module market will continue to grow. Polycrystalline modules will dominate the market in the future as well, with their costs dropping further due to the reduction in wafer thickness and silicon usage every year. The efforts to increase solar module efficiencies will lead to improved performance of solar PV plants in the future. Further, recycling of used or damaged solar cells and modules may play a significant role in shaping the future of the solar PV industry.