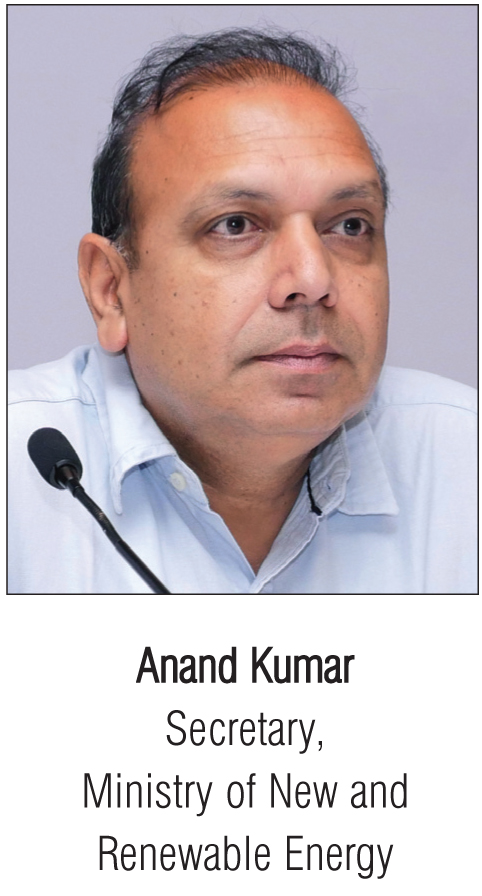 Following the recent success of reverse auctions and acting on industry concerns over the recent slowdown in new capacity allocation, the Ministry of New and Renewable Energy (MNRE) has announced plans to auction 21 GW of solar and wind power capacity in 2017-18. Given that only about 8 GW of capacity has been tendered so far in the year, it seems unlikely that the target will be achieved. In an interview with Renewable Watch, Anand Kumar, who took over as secretary, MNRE, in July 2017 outlines the growth trajectory for renewables, the sector’s performance in the past year and the key challenges….

How would you sum up the performance of the renewable energy sector in the past one year?

The renewable energy sector has done fairly well and we have been able to bring in some significant changes. One such change is the transition from the feed-in tariff (FiT) regime to competitive bidding in both the solar and wind power segments. For solar power, the lowest price achieved so far has been Rs 2.44 per kWh and for wind power it has been Rs 2.64 per kWh. These prices could be for the best sites in India and the rates may differ from state to state, depending on irradiation, resource availability, the state’s policy framework, land costs, etc.

What is the update on the International Solar Alliance?

We have been able to achieve the ratification of the International Solar Alliance (ISA). The prime minister announced this initiative on the sidelines of the Conference of Parties (COP) 21 in 2016. In 2017, at COP 22, we opened the ISA for participation by various countries and we have received the support of 35 countries as signatories to the framework as well as 15 ratifications. This has made the ISA an international inter-governmental body. The last ratification was achieved on November 5, 2017 and it will now become fully functional on December 5, 2017. Within two years of the announcement of the ISA, the MNRE has been able to gather the necessary support, with the assistance of the Ministry of External Affairs. The MNRE has been instrumental in making the ISA the first international and inter-governmental association to be headquartered in India.

What are your priorities for the short and medium terms?

How is the National Solar Mission (NSM) progressing? What measures are you taking to facilitate the effective implementation of the scheme?

We are doing fairly well with regard to the NSM. We are doing well as far as ground-mounted solar power capacity is concerned. We have been able to install 14 GW of ground-mounted solar capacity. However, the rooftop solar segment is facing several challenges. One of these pertains to net metering but we are in the process of resolving it. We are trying to implement quality standards, which include promoting the use of radio frequency identification-enabled solar panels so that we can deliver quality. We are also planning to begin a “rent-your-roof” programme. With the price of solar cells, panels and switches coming down, the rooftop solar segment will pick up pace soon. By 2022, I am sure we will be able to achieve not just 100 MW but more than that. We are already planning to revise our annual ground-mounted solar target from 15 GW to 17 GW.

What has been the impact of competitive bidding on the wind power segment? How are you planning to address the issues faced by the segment?

We have seen a transition from the FiT regime to the bidding system. Most of the state electricity regulatory commissions (SERCs) were earlier awarding projects on an FiT basis. We had given instructions to the SERCs to continue awarding projects on an FiT basis on the rates decided by them. However, they have not really taken the FiT route; for the benefit of the consumer, they are taking the bidding route.

The Solar Energy Corporation of India (SECI) has already allocated 2,000 MW of wind power capacity and has achieved a price of 2.64 per kWh in the latest auction concluded in October 2017. Another tender for 2,000 MW of wind power capacity has been announced recently by SECI. Gujarat and Tamil Nadu have also come up with auctions of 1,000 MW each. We are planning auctions for more capacity than the currently installed manufacturing capacity. We are also talking to the Export-Import Bank of India to increase wind exports to other countries.

What do you see as the biggest challenge in the renewable energy sector? What measures do you intend to take to counter this?

The biggest challenge for renewable energy is the high cost of storage. Although storage prices have come down by 45 per cent between 2010 and 2017, it is still costly. I hope storage becomes cheaper in the coming years and once that happens, renewable energy will never look back. With efficient storage, the problem of power wastage will be overcome. To boost renewable sector growth, we are trying to extend the inter-state transmission system. As proposed, free inter-state transmission will be provided to all projects commissioned up to August 2022. In addition, we are trying to develop green energy corridors. We are also trying to bring in new schemes to develop smaller projects of 1 MW or 2 MW capacities that can be linked to 11 kV/33 kV stations on barren land that cannot be used for agriculture.

What is your outlook for the power sector in general and for renewables in particular?

India is self-sufficient in power, but this is considering the fact that we currently have very low consumption. In the years to come, as India transforms into a developed country, the demand for power is bound to grow. Currently, India is facing a problem because of limited fossil fuel and we do not want to waste our foreign exchange on imports. Renewable energy is the only way India can move forward. The country is also committed to reducing its carbon footprint. The emission intensity will be reduced by 33-35 per cent by 2040. If India has to supply affordable power, especially in remote areas, renewable energy is the only way to proceed.

Renewables can be helpful in remote areas only with the help of a minigrid supported by solar panels or mini-hydropower plants. However, securing financing for these projects is always a challenge. In a positive development, the Indian Renewable Energy Development Agency has raised a loan of $300 million to support such projects. We are also trying to bring in a scheme for providing grid-connected and off-grid solar pumps to support the agriculture sector. Farmers will be able to consume the power for captive use and also supply it for generating extra income.