India’s wind power tariff fell to a record low of Rs 2.64 per kWh in the second wind project auction conducted by the Solar Energy Corporation of India (SECI) for 1 GW of wind power projects. This is a 24 per cent decline from the winning tariff of Rs 3.46 per kWh discovered under the first tender released by SECI, the auction for which was conducted in February 2017.

Such low bids are stemming from the ongoing transition from the feed-in tariff (FiT) regime to competitive bidding-based allocation, which, for the time being, has left the project pipeline dry like never before. As a result, a large number of domestic and international players with voracious appetites, access to low-cost funds and major investment plans are vying to win whatever capacity is up for tendering. Distress sales by turbine manufacturers have further enabled independent power producers (IPPs) to quote lower tariffs.

This tariff crash comes at a time when India’s wind energy segment is already in the doldrums. Following the introduction of the new tariff-determination system, the central and state governments did not conduct any wind farm auctions, leaving companies without a pipeline of projects to work on. Power distribution firms queered the pitch further by wanting to renegotiate previously signed power purchase agreements (PPAs) and pressuring wind power producers to sell at the newly discovered low rates. Some states such as Andhra Pradesh have already announced that they are looking to renegotiate their offtake commitments for projects awarded at a comparatively higher tariff.

As a result, the sector has seen a sharp fall in capacity additions in 2017-18 as compared to the previous year when about 5.5 GW of capacity was added.

What led to the tariff freefall

Under the FiT regime, the least tariff that was offered by any state was Rs 4.16 per kWh in Tamil Nadu. With the wind industry being able to lobby for its interests at the regulators’ hearings for fixing tariffs, wind prices remained firm even while solar tariffs kept declining thanks to competitive bidding. Hence, a situation prevailed wherein market-determined solar tariffs kept declining, even as the regulator-determined wind tariffs did not.

However, the central government’s decision to move to competitive bidding for project allocation to improve efficiencies across sectors brought the wind power segment into the auction spiral as well. The contrast between solar and wind power tariffs also led to the government bringing in competitive bidding for wind, overruling the objections of the industry. From the government’s point of view, the results turned out to be remarkably positive with wind tariffs sliding to Rs 3.46 per kWh in the first auction for 1 GW of capacity, held in February 2017.

On track or not?

Currently, the country has a wind power capacity of 32.5 GW. In order to meet the 60 GW target by 2022, the industry will have to add around 6 GW of capacity per annum, which seems next to impossible for 2017-18. While the MNRE has set a target of 4 GW for the current year, only about 350 MW has been added as of August 2017 and the industry is not expecting to add more than 1,500 MW in total. If the project supply side is not given an adequate and timely boost by the government, there could be far-reaching implications for the health of the sector.

Recognising this problem, the government has announced a plan to auction 4,500 MW of capacity in the coming four months. A 1,500 MW wind project tender is likely to be launched in October 2017. Two more such tenders are planned to be launched, one in December 2017 and the other in February 2018. The new tenders are expected to allow developers to bid for higher capacities of up to 400 MW compared to the 250 MW allowed currently. This will help improve project economics and bring down tariffs further.

If these plans materialise, along with state-level tenders, it may bring the segment back on track. But given the past record and the experience of the solar power segment, which has also undergone significant delays in tendering, the 6 GW per annum number looks a bit too ambitious for 2018-19. Capacity addition may pick up from 2019-20 onwards. 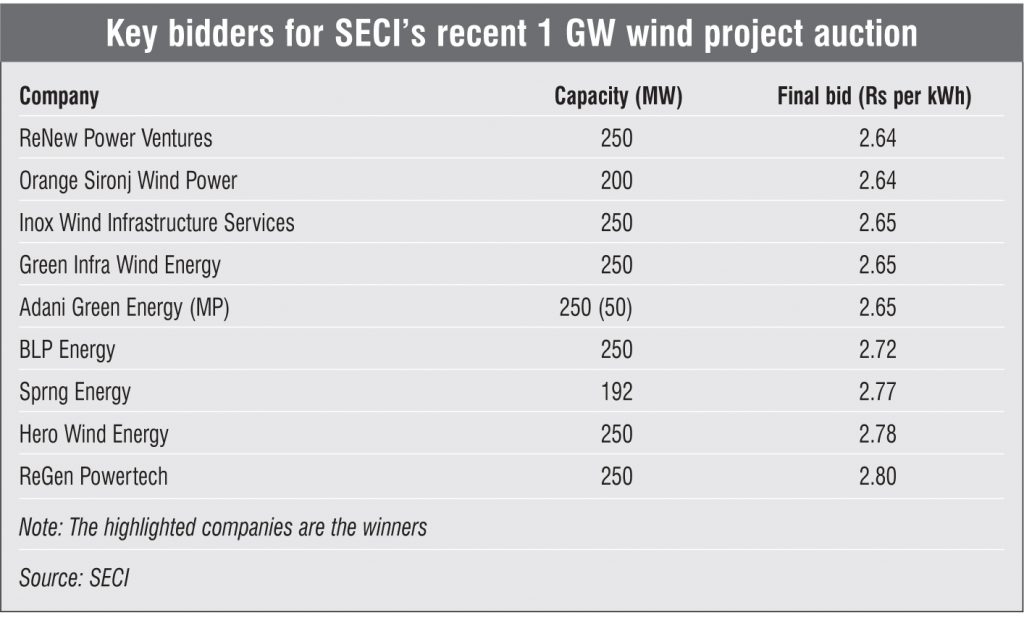 However, that resolves just one of the issues – the project pipeline. There are other large issues that need to be resolved to put the segment back on the growth track.

For any sector to be healthy and sustainable, all stakeholders should gain. What the industry loses in terms of prices, it should earn in terms of volumes.

To boost volumes, the state governments should be enabled and encouraged to come out with wind tenders. Tamil Nadu recently attempted one by issuing a 500 MW wind tender, the results of which were declared a few weeks before the SECI tender. ReGen Powertech was declared the lowest bidder, quoting a tariff of Rs 3.42 per kWh. However, post the latest SECI results, the industry is not sure if the state will go ahead with the PPA signing as the state authorities may be contemplating retendering in the hope of tariffs falling further.

Various state electricity regulatory commissions (SERCs) have also recently brought down FiTs. For example, the Karnataka Electricity Regulatory Commission (KERC) passed an order on September 4, setting a fresh FiT of Rs 3.74 per kWh for wind power, which is considerably lower than the tariff of Rs 4.50 per kWh set by it in October 2015. This has been in response to the wind auctions held in Tamil Nadu, which saw the winning tariff plunge to Rs 3.42 per kWh. The order, however, put into jeopardy 599 MW of wind projects that already had PPAs signed with various discoms in Karnataka at the old rate of Rs 4.50 per kWh, but which had to still be ratified by KERC. Around 273 MW had already been commissioned and power was being supplied to the state discoms at Rs 4.50 per kWh. But following the new order, these PPAs will have to be renegotiated at Rs 3.74 per kWh. Meanwhile, 326 MW of capacity is still under construction.

Such attempts have to be discouraged and controlled as the developers had put funds into the projects at a certain assumed cost and margin. The regulators’ attempt to change the tariff at a time when the funds have already been invested is not fair, say the developers and investors.

There has been a costly delay on the part of the Central Electricity Regulatory Commission in bringing out guidelines in this regard. The states should stop issuing threats of re-negotiating signed PPAs or not signing negotiated PPAs with a view to arm-twisting energy companies to accept lower prices, and instead prepare for competitive bidding. Above all, the central and state governments should work towards creating a free market for electricity, where any generator can sell to any buyer at any price, which is the overarching objective of the Electricity Act, 2003. Today, such “open access” is hampered by state governments disallowing it or making it costly through levies such as cross-subsidy charges.

Other impediments such as curtailment of wind power procurement, payment delays and the absence of guidelines for state-level wind bids also need to be addressed on priority. 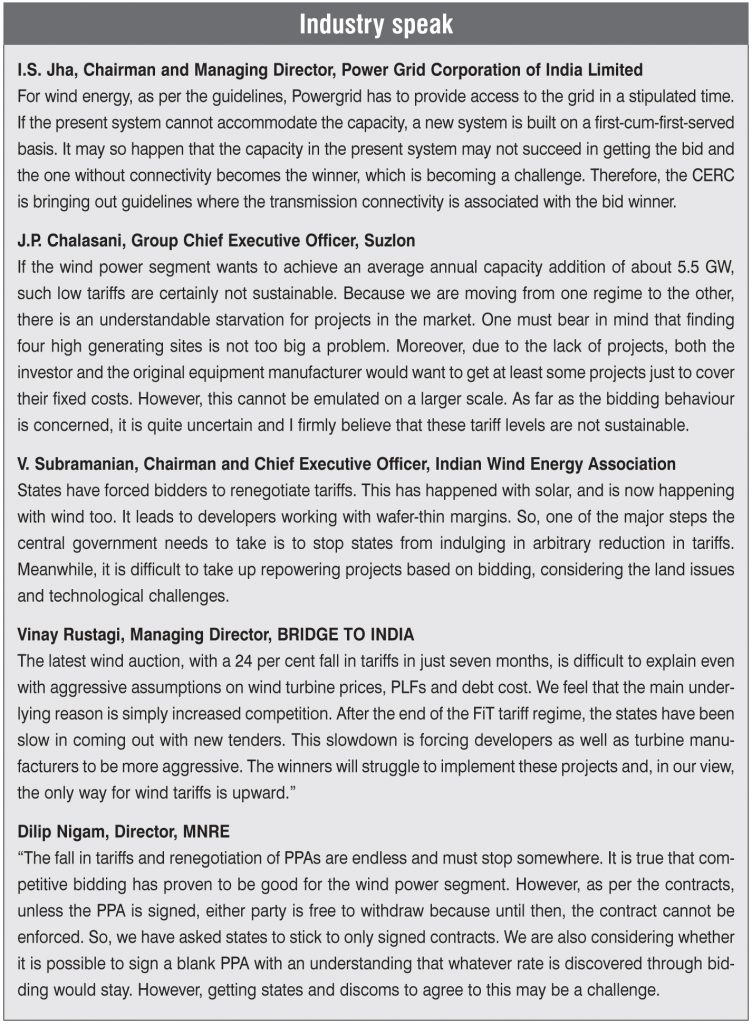