The years 2015 and 2016 saw a rise of over 30 per cent in solar photovoltaic (PV) installations worldwide, with record-breaking capacity additions in China, India and the US. Given its  solar target of 100 GW by 2022, supported by the National Solar Mission and intended nationally determined contributions, India is likely to witness increased capacity addition going forward. Various industry reports also indicate that China, the US, India and Japan will be the key solar growth markets in 2017, accounting for more than 55 GW of the new installations or approximately 70 per cent of the total market share.

This has piqued the interest of many international players in the Indian solar PV module market. The REC Group is one such module manufacturing company that has ambitious expansion plans in the country.

REC was founded in 1996 with its headquarters in Norway and a manufacturing hub with 1.4 GW capacity in Singapore. Although it has maintained a low profile so far, it is amongst the key solar module suppliers in Europe, and has a sizeable presence in the US, Asia and Australia. In India, it has been present in the renewable energy space for the past six years, and has been building a slow but steady base as a trusted module supplier. It hopes to build on this market reputation to drive its expansion plans in the country.

In 2016, the company sold solar panels worth 1,265 MW in the Asian, European and US markets. The figure is expected to increase in 2017, with 601 MW worth of solar panels already sold in the first and second quarters of 2017.

In India, REC has a small set-up of eight employees across the country, including sales and technical teams. As of September 2017, the company has shipped over 250 MW worth of solar panels to India. REC’s oldest project in the country was for Kanojia Chemicals in Rajasthan, where a plant of 5 MW capacity was set up in 2012 under the renewable energy certificate mechanism.

One of REC’s first large-scale clients is Greenko, for which it has supplied 40 MW worth of panels in 2017 for the Kurnool ultra mega solar park. The company also supplied 5.3 MW of modules for a canal project in Punjab, which was commissioned in the first quarter of 2017. In addition, 12 MW of modules were supplied to the Heavy Water Board through Lanco.

REC has also supplied modules for small solar plants to companies such as BMW, Turbo Energy, the Global Group, Infosys and Tata Consultancy Services. This has been made possible through its 15 engineering, procurement and construction (EPC) partners across the country. Over the past year, REC has supplied modules for 10 kW-500 kW systems to about 100 EPC companies. 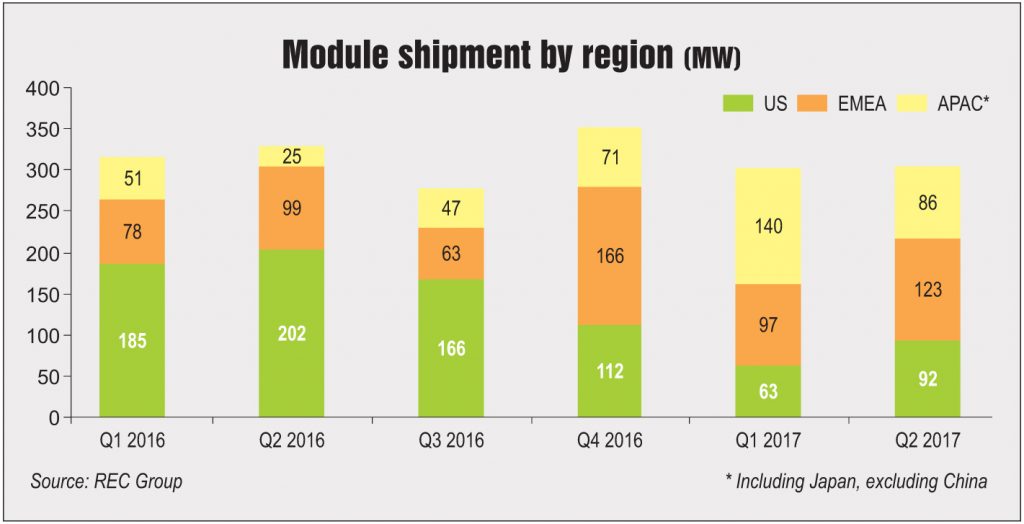 According to Rohit Kumar, REC’s head for the Indian subcontinent, “Rooftop solar is the way ahead in India.” The 40 GW target set by the Ministry of New and Renewable Energy will help create new market opportunities. Another growth driver for promoting investments in India is the rural electrification market, with nearly 300 million households still lacking access to grid connectivity.

According to Kumar, the rooftop market had a slow start in India, leading to concerns about meeting the ambitious target.  However, today the commercial market is viable and customers are using solar to cut energy costs using both capex and opex models. Kumar further states that in the past, there was confusion on opting for the capex or opex models, and customers’ hesitant to invest large working capital in rooftop projects, opted for opex. However, the trend is now shifting towards capex. This can be attributed to the growing interest of consumers in owning the rooftop systems after having had a bad experience with opex developers. Many consumers feel that renewable energy service companies (RESCOs) have not been implementing projects properly and have been using low quality modules to cut costs. Since consumers do not have any control over their own rooftops, as they do not own the PV system, there has been a rising distrust with the RESCOs.

REC experienced strong growth in the first quarter of 2017 in terms of volumes in the Asia-Pacific (APAC) region. The region accounted for 47 per cent of the total shipments. Apart from India, Australia and Japan are key markets for REC. Both countries have large residential markets that  the company has been able to tap successfully. In fact, the module replacement projects in Japan have reinvented the solar space for module suppliers. However, the market has not expanded to its full capacity owing to overcapacity and subsequently, slow grid connections. Despite the bottlenecks, REC was able to increase its number of deals in Japan by 71 per cent in the first half of 2017 compared to the corresponding period last year.

The company is building a project pipeline in Taiwan and Thailand as well. Thailand is already a mature market and, although it is experiencing a slowdown, the country is expected to emerge as a big market for solar power in the long run. Meanwhile, Taiwan’s solar market is just opening up and the feed-in tariff system has been recently introduced to promote solar energy.

According to Milan Koev, REC’s vice-president, sales, APAC, it is difficult to project module price trends in this volatile market. Market prices not only depend on Chinese manufacturers but also on the cost of silicon and polysilicon, he notes. In the entire value chain of solar panel manufacturing, most of the players have been incurring losses. The much-talked-about consolidation in the PV manufacturing market was expected to take place a few years ago, but it did not. Koev is optimistic that this situation will not last for very long as losses will become unsustainable after a while and consolidation is inevitable in the near future.

He is of the opinion that over the next year, the US’s stance on Section 201 Trade Petition will be crucial for the company. Besides, trends in India’s and China’s solar space will also play an integral role as both the countries have ambitious renewable energy targets. He, moreover, adds that the Eastern European countries have had short-term booming markets, driven by low-cost local materials that are poor in quality, which did not go well for the industry. Better quality solar modules may, therefore, gain favour in that market.

However, the company and the solar industry in general are surprised to find Indian developers have taken a long time to realise that investments in the solar segment do not entail a one-time capital expenditure; they also include recurring expenditure such as operations and maintenance (O&M). With the Indian industry realising the necessity of ensuring high module quality to avoid losses in generation and reduce O&M costs, REC hopes to use its market reputation to widen its consumer base.

The company sees the southern states and Rajasthan as the largest potential markets for solar plants. Based on past trends, the commercial and industrial segments are likely to lead in setting up rooftop solar systems since residential electricity is subsidised in the country and the market is yet to pick up.

REC recently launched its Partner Program in India.  The programme has already seen worldwide success and has over 1,000 installers and EPC contractors currently. The company has customised its programme for the Indian market and is, therefore, splitting it into two parts. The next step for REC is to start the certification process for its EPC partners. This involves training and sharing best practices with the aim of ensuring that the installations are as per REC’s standards, irrespective of the location or size of the power plant.

Currently, the company has a project pipeline of 150-200 MW. In India, it faces the risk of a short-term decline in demand owing to the increase in module prices internationally, which may lead to Indian companies delaying their buying decisions as well as due to the uncertainty in project allocation on the part of the government. Nonetheless, the company plans to follow a balanced approach in all segments, that is, rooftop and ground-mounted solar, by banking on its broad product portfolio, quality, reliability and competitive cost, all of which will help it strengthen its footprint in the country.