Under the Paris Climate Agreement, the government committed to install 175 GW of renewable energy by 2022, of which 100 GW will be from solar power and 60 GW from wind power. India also promised to generate 40 per cent of its power from renewable sources by 2030. Accordingly, of the country’s total installed capacity of 315.4 GW as of March 2017, 52 GW comprises renewable energy.

The record capacity addition can be attributed to a combination of factors. One, was the last year when accelerated depreciation benefits were being offered at the rate of 80 per cent. From April 2017 onwards, these benefits will be phased out. Second, there was uncertainty regarding the continuation of generation-based incentives. Third, the central and state governments have been playing a key role in promoting renewable energy, leading to enhanced investor interest.

While wind leads India’s renewable energy sector, there are several challenges plaguing the segment. These include the issue of squatters blocking good wind potential sites, inordinate delays in the signing of power purchase agreements with state discoms, delayed payments and distribution firms shying away from procuring power generated from wind energy projects.

However, the government has been making consistent efforts to resolve these issues. It has taken many steps, including arranging finances for the development of transmission and evacuation infrastructure (green energy corridors), devising strategies to ease the financial burden of state discoms (Ujwal Discom Assurance Yojana) and encouraging the establishment of greenfield manufacturing units (Make in India). All these have helped lower the risks related to faulty power offtake, delayed payments and defaults, as well as helped bring down the cost of equipment. The ministry has taken several other policy initiatives as well, including introducing bidding in the wind energy segment and drafting a wind-solar hybrid policy.

The reverse auction-based 1 GW tender for wind projects drew significant interest from the industry, with the lowest bids reaching Rs 3.46 per kWh, making the segment extremely competitive with other sources of power. In addition, state governments have shown a strong inclination towards adopting competitive bidding for project allocation. The Gujarat and Andhra Pradesh governments have already announced their plans for the same.

The government has also come out with a National Offshore Wind Energy Policy, which aims at harnessing wind energy along India’s 7,600 km coastline. Preliminary estimates show the Gujarat coastline has the potential to generate around 106,000 MW of offshore wind energy and Tamil Nadu about 60,000 MW.

Given the government’s increasing focus on promoting wind energy development, the growing participation of international players such as Senvion, Vestas, Gamesa and GE, strengthening of the domestic manufacturing base, and improving turbine efficiencies, the industry is likely to witness higher investor interest going forward. 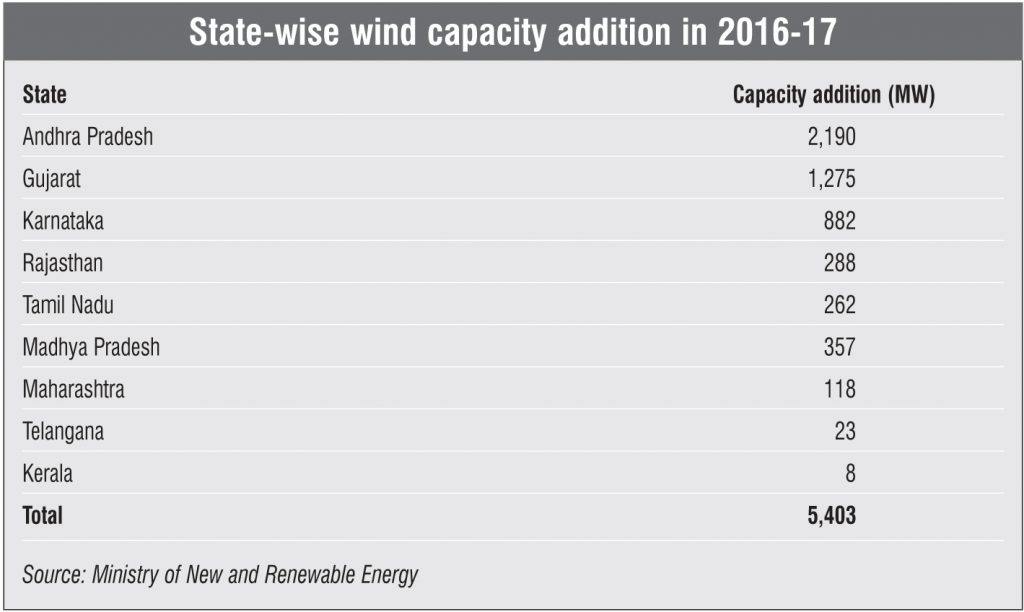 Solar short of target, but leads on many counts

Solar capacity additions in 2016-17 were 43 per cent below the set target of 12 GW (7 GW utility based, 5 GW rooftop based). A significant part of the underachievement was in rooftop solar additions with only about 500 MW of capacity being added during the year. However, the segment has set records on several counts, including surpassing wind capacity additions for the first time. With the growth in 2016-17 nearly doubling over the previous year, the cumulative solar capacity currently stands at 12,288.83 MW compared to 6,762.85 MW as of March 2016. Exceeding 12 GW of solar capacity is no mean feat, especially considering that the capacity was just 2.6 GW three years back.

As in previous years, in 2016-17, many projects were commissioned just in time to beat the year-end deadline. Of the 5,526 MW added, only 2,803.77 MW had been commissioned until February end, but it was followed by a spurt in additions of more than 2,700 MW in March 2017. This was the case for wind power as well. 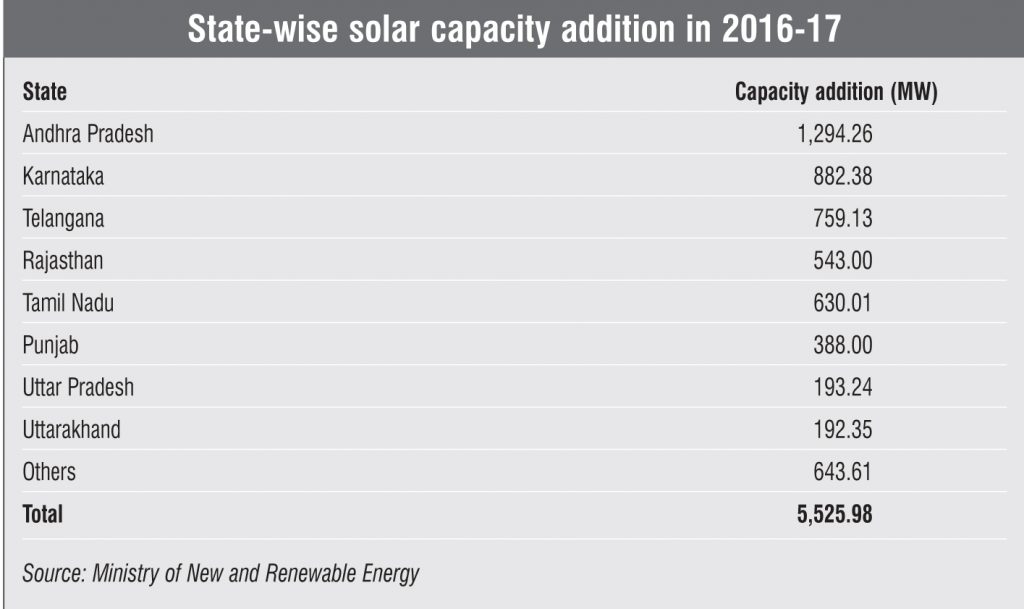 The achievements in 2016-17 are a result of the combined efforts of the government and the industry. There has been an improvement in the compliance levels of the states in meeting their renewable purchase obligations. Besides, there has been growing interest in buying renewable energy with tariffs touching record lows. In two separate tariff-based reverse auctions held in February 2017, wind energy tariffs touched a historic low of Rs 3.46 per kWh while solar tariffs hit Rs 3.30 per kWh for the Rewa solar park. According to Tulsi Tanti, chairman, Suzlon Energy Limited, the total investment in the renewable energy sector stood at $4 billion in 2014-15. Subsequently, it rose to $7 billion in 2015-16 and $14 billion in 2016-17.

Currently, 14 GW of capacity is reportedly under construction or at the design stage. A large portion of this capacity is expected to be commissioned during 2017-18. An additional 6 GW of solar capacity and an equivalent amount of wind capacity are also scheduled to be auctioned soon. The stage is therefore, set for much higher growth in 2017-18.