The Indian renewable energy sector witnessed interesting developments during 2016. These included multiple regulatory changes, which are expected to have strong repercussions on the market by the end of the financial year. The wind segment saw a series of policy modifications while the solar segment continued on its growth trajectory. Several initiatives were taken under the Ujwal Discom Assurance Yojana to improve the financial health of the ailing discoms. Meanwhile, the decline in equipment prices and India’s ratification of the Paris Agreement are further encouraging the adoption of renewable energy technologies. This also laid the groundwork for achieving the ambitious renewable target of 175 GW of installed capacity by 2022.

The solar energy segment crossed a significant milestone during the year with the installation of a cumulative capacity of 10 GW, of which 4.9 GW was added in 2016 alone across the grid-connected, rooftop and off-grid solar segments. With tariffs for solar power falling to below Rs 5 per unit, investors and developers are concerned over decreasing revenues. However, the large number of solar projects is likely to offset the dip in tariffs.

The wind segment saw record installations in 2015-16, but the ecosystem is likely to change considerably in the coming years. The accelerated depreciation (AD) benefit and generation-based incentives (GBIs) that had earlier attracted developers to invest in the segment have been altered in 2016, with the changes to come into effect from the next financial year. While the AD benefit has been slashed from 80 per cent to 40 per cent, GBIs have been completely removed. Meanwhile, the wind segment, like the solar segment, is in the process of moving from the feed-in tariff regime to competitive bidding. In light of these changes, the wind segment could witness some market turbulence going forward.

However, during the quarter ended September 2016, some companies continued to show positive growth while others were able to cut their losses, resulting in an overall positive trend in the market. A look at the financial results of select listed renewable energy companies for the quarter…

Indosolar Limited continued to witness losses during the second quarter of 2016-17, registering a loss of Rs 316.1 million, thus further eroding the company’s net worth. Its liabilities exceeded its assets by Rs 13.4 billion, with its long-term borrowings having been considered as current liabilities. The company’s bank accounts were declared to be non-performing assets. On the bright side, Indosolar generated revenues of Rs 1,073.6 million during the quarter ended September 2016, as against Rs 938.4 million in the previous quarter, a quarter-on-quarter growth of 14.4 per cent. The company also registered a year-on-year growth of 289.5 per cent, with only Rs 275.6 million generated in the quarter ended September 2015. It earned cumulative half-yearly revenues of Rs 2,012.1 million during the half-year ended September 2016, as against Rs 787.5 million in the corresponding period in 2015, a growth of 155.5 per cent.

Owing to the positive growth of the solar segment in the country, the company had a significant order book of 136 MW as of end-September 2016. Indosolar has an export-oriented solar photovoltaic module manufacturing business, which generated net foreign exchange earnings of Rs 991.9 million during the quarter. Despite the losses, the company witnessed some positives owing to the high revenue growth over the corresponding period in 2015-16.

Indowind Energy Limited earned revenues of Rs 134.9 million during the quarter ended September 2016, as against Rs 95.6 million during the corresponding period in 2015, recording a significant growth of 41.2 per cent. The revenue in the quarter ended September 2016 grew by 72.6 per cent over the Rs 78.2 million registered in the previous quarter ended June 2016. The company’s net profit increased to Rs 6.8 million in the reported quarter from Rs 5.5 million in the same period in 2015, registering a 24.1 per cent growth. However, the company had an operating loss of Rs 20.09 million and a total expenditure of Rs 112.1 million, which offset the high revenue earned by the company to deliver a low profit.

During April-September 2016, the company registered revenues of Rs 213.2 million, a significant increase of 41.7 per cent from the Rs 150.5 million recorded in the corresponding period in 2015-16. Profits rose to Rs 7.7 million from Rs 5.6 million during the same period, recording a growth of 36.5 per cent.

The increase in revenues can be attributed to a good wind season resulting in higher generation. The company is looking to add 10 MW to its existing operational assets of 50 MW, either through repowering or replacement of old capacity.

Despite low power generation from solar assets due to the monsoon season in the reported quarter, the company recorded relatively strong revenues and profits. It installed 20 MW of new solar capacity during the quarter and is targeting a total of 80 MW by the end of the financial year. The total installed capacity of the company’s wind farms stands at 429.2 MW, including a 50.5 MW wind farm in Andhra Pradesh to which it plans to add another 47 MW by the end of the financial year. According to the company, the results for the quarter ended September 2016 are the highest ever quarterly profits in its history, mainly due to reductions in the backdown of power from its plants, from about 23 per cent in the previous year to about 11 per cent this year.

The company divested 51 per cent of its stake in 195 MW of assets, signed power purchase agreements for 340 MW and won bids for 515 MW during the quarter. It had a strong wind order book of 1,136 MW as of September 2016. 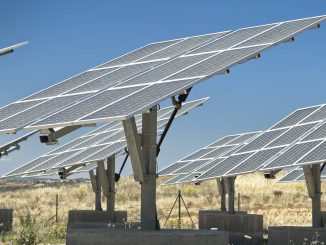 January 6, 2017
Solar power generation has been rapidly increasing in India owing to technological advancements in the segments leading to innovative methods and proc...
More