Established in 2011, Rays Power Infra has emerged as a key engineering, construction and procurement (EPC) player in the Indian solar industry in a short span of time. The company started out as a consulting firm for solar projects, advising over 50 clients in its first year of operations. It subsequently ventured into the EPC space, diversifying into transmission line and complete plant construction. “The past three years have seen us foray into integrated EPC services and pioneer the concept of solar parks in India,” says Ketan Mehta, chief executive officer, Rays Power Infra.

So far, Rays Power Infra has executed about 285 MW of renewable energy projects spread across eight states. One of its most remarkable projects, and also the largest, is a 55 MW solar project at Orai in Uttar Pradesh for the Essel Group. The project was executed in record six months. The company is currently executing a 100 MW project at a single location, which will be its largest project upon commissioning.

The company is also focusing on the solar rooftop segment since its entry into the space in early 2016. It has executed a cumulative capacity of 2 MW for institutional consumers such as home owners, schools, colleges, hospitals and commercial entities. According to Mehta, “There is immense potential in the segment as consumers are looking to utilise their vacant roofs to generate clean energy while offsetting their increasingly inflated electricity bills.” Rays Power Infra has also forayed into the project development space in both wind and solar with a portfolio of 160 MW and 25 MW respectively. It is looking to develop more projects every year.

The company has been posting impressive financials. During 2015-16, it recorded a top line of over Rs 3,000 million with earnings before interest, taxes, depreciation and amortisation (EBITDA) of Rs 250 million. For 2016-17, the company is targeting a top line of Rs 8,000 million and EBITDA of Rs 750 million. “We have seen our revenue grow 55 times in the past five years at a compound annual growth rate of 172 per cent,” says Mehta. The company’s current order book is valued at more than Rs 6,000 million. The company is also in talks with several investors to raise funds for its projects. It had earlier partnered with Hillard Energy to jointly develop 150 MW of solar power projects, entailing an investment of $130 million. 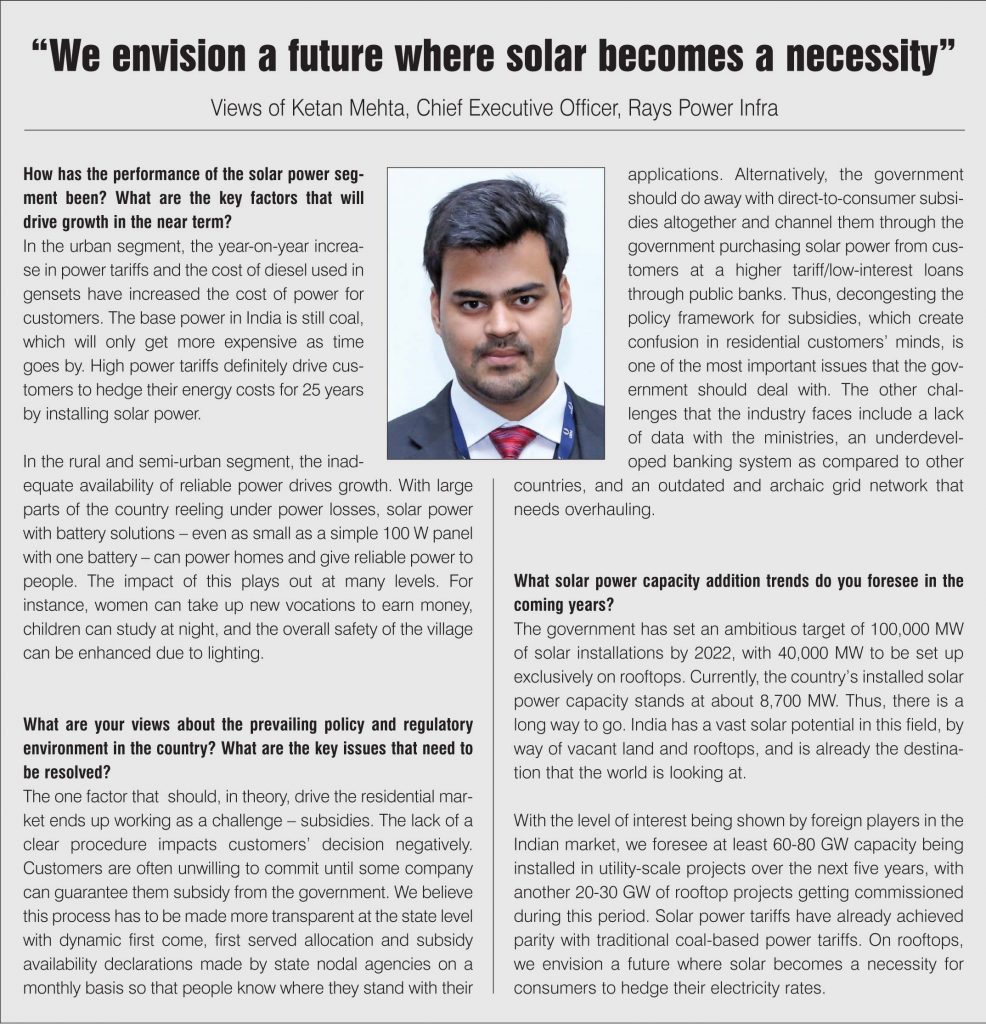 Rays Power Infra has set ambitious targets for itself. The company is looking at exponential growth in the coming years, having signed projects of over 500 MW with various foreign players and Indian infrastructure giants for the next year.

The company aims to achieve a 1.5 GW rooftop EPC portfolio (residential, commercial and institutional) and become the market leader in the Indian solar rooftop space by 2021-22. It is also targeting to become the leading third-party turnkey solar project solution provider in the country executing projects totalling 2.5 GW by 2021-22. On an overall basis, the company has set its sights on achieving a total portfolio of 6 GW across the ground-mounted, rooftop and project development segments by 2021-22. 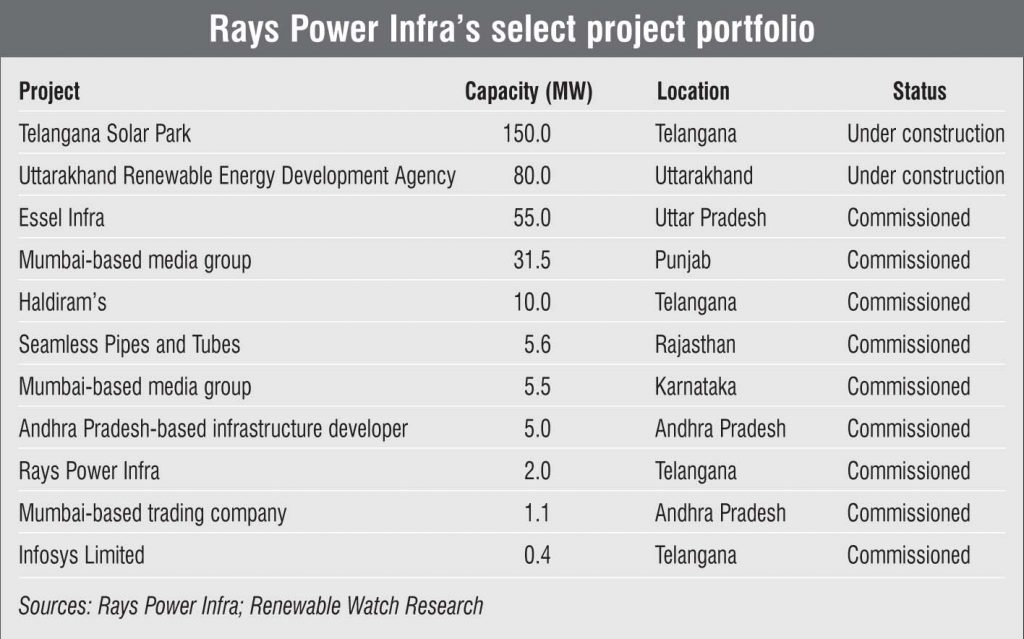 While the company has delivered successful projects in its five years of operations, it did face challenges early on. The biggest challenge was establishing its credibility among conglomerates and developers, who are also its clients.

Further, dealing with rapid changes in solar technology development, lack of data on this sector with the government, lack of clarity on the engineering and commercial aspects, and land acquisition were the other challenges that the company faced in the initial years of its existence. While some of the challenges still remain, a lot of gaps on the data front have been addressed with the rapid scale-up of the sector. The company

has also put in several efforts to make land acquisition and project execution its core strengths.

In the highly competitive Indian solar industry, Rays Power Infra has been able to establish itself as a serious player. Going forward, the company is likely to further strengthen its position on the back of growing demand in the market.