These technologies use systems of mirrored concentrators to focus the direct beam of solar radiation onto receivers that convert the energy into high temperature heat. The heat generated is then channelled through a conventional generator to convert into electricity. Typically, this heat is transformed to mechanical energy through a steam turbine and then to electricity. So, the plants consist of two parts – one that collects solar energy and converts it into heat and  the other that converts the heat energy into electricity. For low (less than 150 °C) to medium (150 °C-400 °C) temperatures, solar process heat installations for industrial use are similar to those used in residential buildings. However, for higher temperatures (greater than 400 °C), CST technology is required.

There are four main configurations of CST technology that are commercially available – parabolic trough, linear fresnel reflector, parabolic dish and central receiver tower. Of these, parabolic trough is the most prevalent.

The parabolic trough is the most mature form of CST technology. It uses large, parabolic reflectors (focusing mirrors) that have oil-filled pipes running along their centre, or focal point. The mirrored reflectors are tilted towards the sun to focus sunlight on the pipes to heat the oil inside to as much as 400 °C. The hot oil is then used to boil water, which creates steam to run conventional steam turbines and generators. Linear fresnal technology is a newer CST technology, wherein reflector stripes are tilted in a way that is similar to parabolic trough such that all incoming beams are reflected onto a collector that is situated around 3 metres above the mirrors. The idea here is similar to that of the parabolic trough system, except that it does not require a huge parabolically shaped mirror, which is expensive to manufacture.

Parabolic dish technology uses mirrored dishes to focus and concentrate sunlight onto a thermal receiver positioned at the focal point of the mirror. In this case, temperatures can rise up to 1,000 °C. In the case of a central receiver tower, the solar radiation is concentrated onto a central heat absorber by hundreds of reflectors on the ground. Temperatures in this case can reach up to 1,300 °C, which is much higher than that in the other configurations. The heat generated inside the collector is used to generate electricity, a process that is more efficient with higher temperature levels. 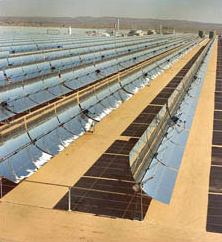 Fulfilling the heat demand in industrial and agricultural food processes

Owing to its long hours of sunlight, India is seen as a potential growth market for CST technologies. The industrial sector, in particular, has tremendous scope for the use of these technologies. It is estimated that industries consume over 15 million tonnes (mt) of fuel oil annually for process heat applications below 250 °C. Likewise, over 35 mt of fuel oil is consumed annually for industrial applications above 250 °C. Since low and medium temperature heat accounts for 45 per cent of the total industrial process heat use, solar thermal systems have a large potential. The use of CST technologies in industrial processes can help companies reduce their dependence on polluting fuels and protect them against volatile fuel prices.

The prime application areas for CST systems are in the food and beverage, transport equipment, textile, machinery, and pulp and paper industries, where roughly 60 per cent of the heating needs can be met by temperatures below 250 °C. The pulp making, pulp processing and paper making operations require a large amount of thermal energy in the form of hot water (at 60 °C) or low-pressure steam (up to 150 °C). This requirement can be easily fulfilled through CST systems and replace the use of polluting fuels by up to 100 per cent. Similarly, in the textile industry, CST systems can be used to support the manufacturing process, which includes yarning and drying (solar hot air), weaving (solar steam), dyeing and bleaching (solar hot water). CST technology can also be used in the dairy industry for activities like milk pasteurisation and sterilisation. In Maharashtra, Chitale Dairy has installed two ARUN dishes for solar steam generation, which are used for milk pasteurisation, sterilisation, etc. Also, at Mahanand Dairy in Maharashtra, a single dish is used for generating hot water for milk pasteurisation. In addition to the dish, an insulated pressurised water storage tank, with a capacity of 5,000 litres, has been installed for operation during non-solar hours. 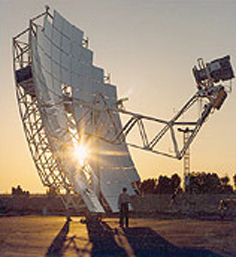 In the hotel industry too, CST technology has major use. In a typical Indian luxury hotel, the energy requirements for heating, ventilation, air conditioning, laundry and cooking, which account for more than 75 per cent of the total energy needs, can be met through the use of CST technologies (see box).

Moreover, almost 80 parabolic dish collectors are used for community cooking in India. The Akshardham temple in Delhi has installed a solar concentrator dish to meet its steam requirement for cooking. This has led to a saving of 12,000 kg of piped natural gas (PNG) per annum for the temple. Solar thermal technology can also provide an alternative to cooling processes in sectors such as food and tobacco, where most of the product cooling is currently done by electric chillers. The tobacco division of ITC Limited, Pune, commissioned 442 square metres of “non-imaging solar collectors” supplied by Thermax Limited. The solar system has been integrated with the existing heating arrangement, which is based on condensate recovery, heat recovery and steam. In the food processing industry, there are several applications of CST technology,  such as for drying fruits and vegetables (solar hot air), frying edible items (hot thermic oil) and pasteurising products for killing germs (solar steam). 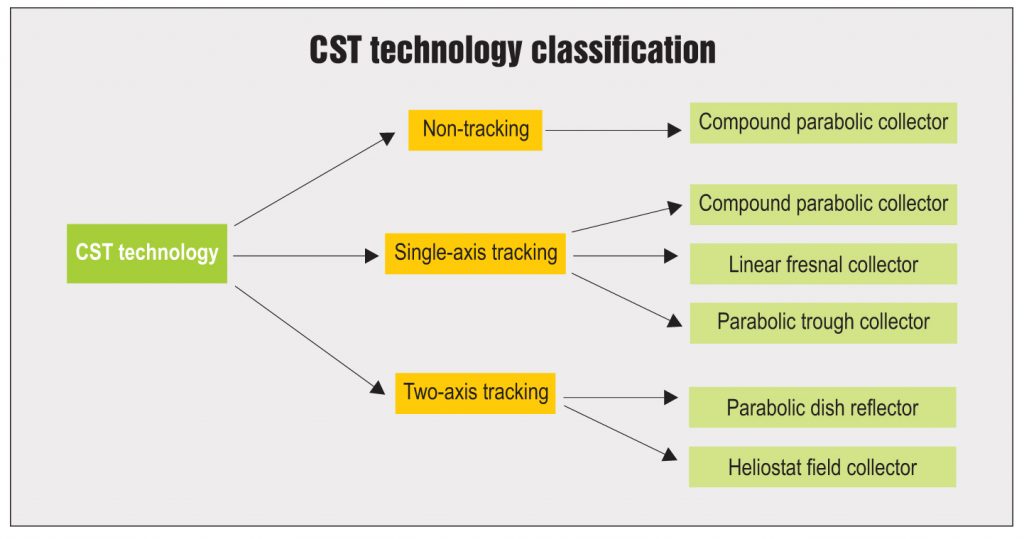 Solar thermal technologies can also be used in the automobile industry, where manufacturing involves many components like casting, forging, painting and electroplating that require heat or steam. To this end, activities like drying, paint-baking and low-temperature tempering can be done through solar hot air. Furthermore, the use of solar thermal systems can be made by chemical and pharmaceuticals companies for activities like distillation, evaporation, sterilisation and drying through solar hot air and endothermic chemical reaction through solar steam.

Some other examples of CST technology-based projects in India are:

CST technology is more effective than solar PV technology due to its higher efficiency and its ability to directly generate AC power, to store thermal energy and provide peak, intermediate and base load capacities. Also, since solar irradiation is harnessed by concentrating it at a single point, CST is able to achieve much higher temperatures.

Despite the advantages that CST technology offers, its widespread use has not taken off in India due to certain challenges. Some of the technical challenges are a lack of knowledge of the quality and future reliability of the resource, which makes it very difficult to assess the financial viability of a project. Moreover, India does not have a successful demonstration project based on this technology, which has impacted investor confidence in taking up CST projects for large-scale implementation.

CST deployment levels are also affected by market challenges, which includes the high capital and operating expenditure associated with its implementation. Given the high upfront cost of CST technologies and the falling prices of PV modules, CST technology has not been able to compete with solar PV in terms of the cost curve. Moreover, such projects have longer gestation periods as compared to solar PV projects.

Another reason hindering the growth of CST technology has been the lack of local manufacturing facilities for some critical components such as reflective mirrors, tracking devices, molten salt and heat transfer fluids. In addition to these challenges, several environmental challenges also exist such as the increased water requirement per unit of electricity produced in the case of CST plants.

Although the use of solar heat in the industry has a number of economic benefits, the actual level of CST technology deployment remains modest in India. Going forward, various initiatives need to be taken to achieve higher market penetration. Governmental support through subsidies is also needed, even as PV projects make progress on the back of rapidly falling PV module prices.

This will facilitate the development of demonstration projects and help cover the high upfront cost, thereby building an environment that promotes investment. Also, more awareness needs to be created about the benefits of solar process heating, especially in the case of small and medium enterprises. Furthermore, solar process heat technologies can be supported by local manufacturing to foster the deployment of CST technology. Hence, stronger policy measures are needed to spur transformative CST technologies.