The Indian renewable energy certificate (REC) market has failed to pick up this year despite multiple regulatory amendments aimed at creating a positive buying atmosphere. Although the situation has improved to some extent over the previous year, it is not enough to make a major dent in REC inventories. Meanwhile, the key reasons for the low uptake of RECs have changed. Earlier, this was primarily on account of non-compliance with renewable purchase obligations (RPOs), which has seen an improvement over the years. Now, with power supply set to exceed demand, RPOs and RECs have come down on the priority lists of businesses. The discouraging financial state of utilities and discoms has also affected their ability to purchase RECs. This, along with their targets to set up in-house renewable energy capacities, has shifted the focus towards building new assets.  Businesses and users are increasingly setting up captive renewable energy power plants instead of purchasing RECs to offset their emissions.

In terms of prices, the RECs traded at floor prices of Rs 3,500 per REC for solar and Rs 1,500 for non-solar bids throughout the year, with no fluctuations.

The gap between the volumes of RECs available for sale and those sold has been increasing continuously, a reflection of the low demand-high supply situation. Despite the number of RECs sold this year being higher than those sold in the previous year, it was still a small fraction of the total RECs available. In 2015-16, only 428,154, or 1.7 per cent, of solar buy bids were made on the Indian Energy Exchange (IEX) against the 2.49 million total sale bids. For non-solar bids, the percentage sold was nearly double at 3.5 per cent, with 2.9 million buy bids against 84 million sell bids. A similar trend was witnessed on Power Exchange India Limited (PXIL), where the solar buy bids stood at 227,363 while the sell bids were over 11.9 million, the buy-to-sell percentage being a dismal 1.9 per cent. The sale of non-solar bids was slightly more encouraging with nearly 2.9 per cent or 1.7 million buy bids being made against the 61.3 million available in the inventory. 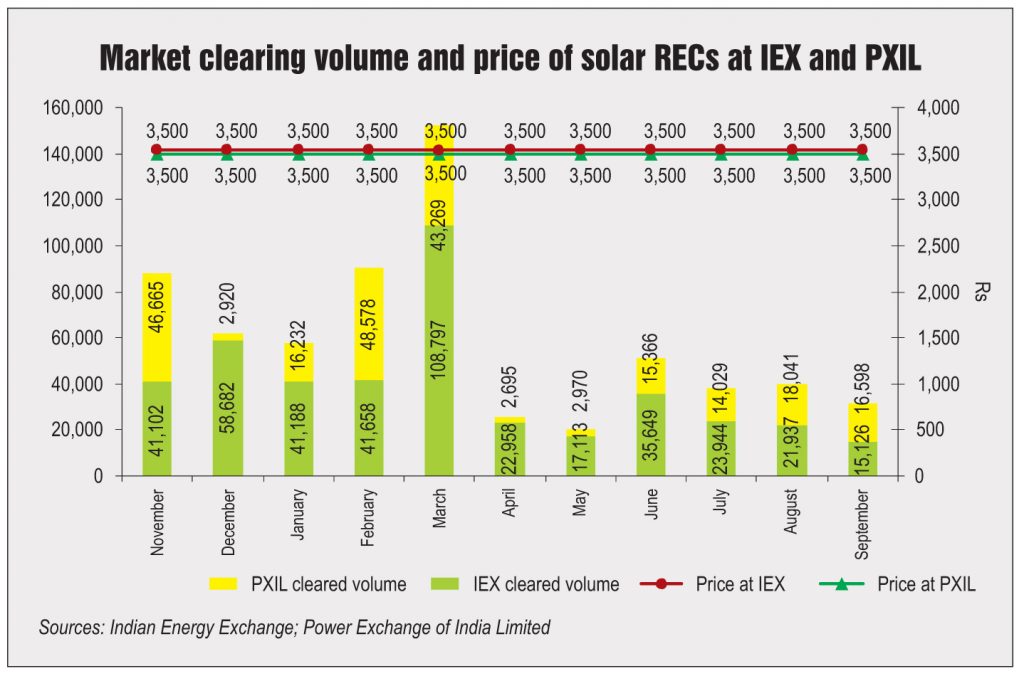 The two exchanges have exhibited similar performance over the years with extremely low sales being a common concern, emanating from the lack of market interest in RECs. Due to the resultant build-up of REC inventory, the prices are unable to rise and thus remain at the government-fixed floor rates. So far, a total of 1,159 projects aggregating 4.97 GW have been registered on the REC Registry of India, which is only about 10 per cent of the 45 GW total renewable energy capacity of the country, as against 12.6 per cent in the previous year.

A look at the monthly accounts of the two exchanges reveals an equally uninteresting story for the industry. In March 2016 – the month when the highest number of certificates is typically sold so as to meet the deadline for fulfilling RPO targets before the end of the financial year – 152,066 solar and 1.14 million non-solar bids were cleared between the IEX and PXIL. Aside from March, the only other month that saw high sales was December 2015 when about 806,993 bids were cleared on the IEX and 91,446 on PXIL in the non-solar category. This was a shot in the arm for the REC market, given that in December 2014, only 177,960 bids had been sold in the same category on the IEX. The unusually high sales volume in December 2015 is a reflection of the regulatory developments that took place during the year, including the Supreme Court judgment in the Hindustan Zinc versus Rajasthan Electricity Regulatory Commission case, the Gujarat High Court judgment in the Gujarat Electricity Regulatory Commission versus Hindalco case, as well as the Appellate Tribunal for Electricity’s judgments. 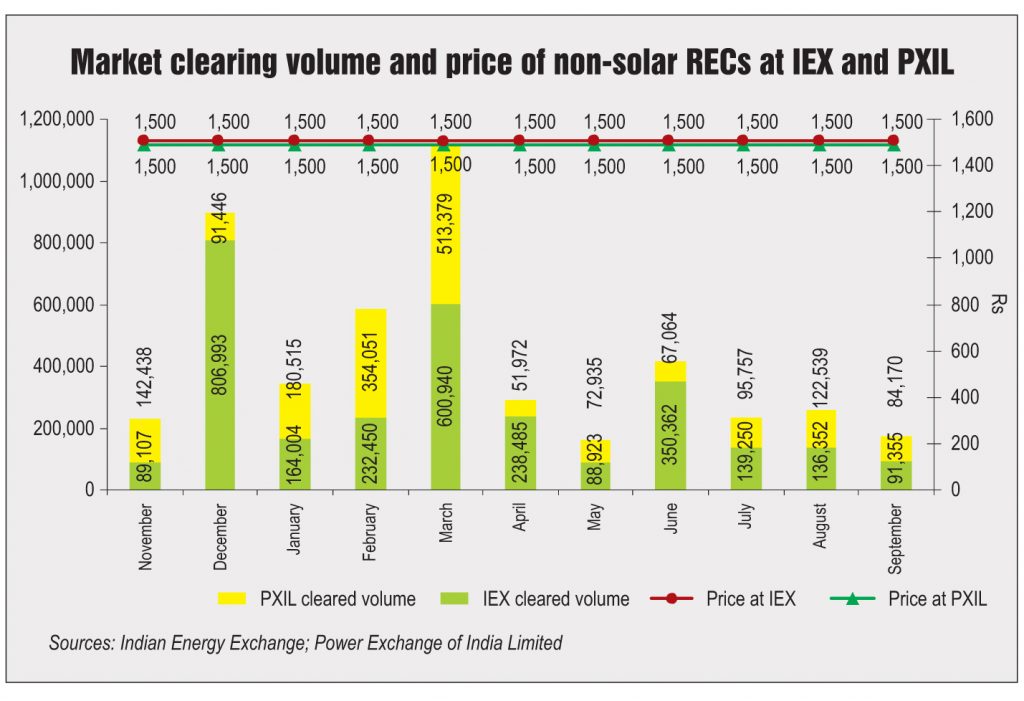 There has been a dramatic shift in the shares of the four categories of traders at the two exchanges over the past year. While the discom, open access and captive consumer categories remained the highlights of the trading season, the voluntary buyers’ category remained virtually non-existent, save for a few buy bids in January and March 2016.

A half-yearly analysis of the period April-September in 2015 and 2016 illustrates a significant swing in the trading market with a reallocation of the largest market share between the three active categories. While the share of discom buyers stood at 17 per cent during April-September 2015 with only 186,181 buy bids, during the same period in 2016, the percentage of buy bids in this category rose to nearly 24 per cent and volumes to 413,956.

Meanwhile, open access buyers accounted for 36 per cent, or 401,919, of the total bids across the two exchanges in April-September 2015. In 2016, the number of buy bids by this category of buyers doubled to 853,675, or 49 per cent, indicating a 13 per cent increase over the previous year. Open access was the dominant category during this period.

The captive consumer category was the only group of buyers that lost market share. From being the dominant buyer in April-September 2015 with a 47 per cent share and 516,996 bids, its share fell sharply to 27 per cent and 477,949 bids in the corresponding period in 2016.

However, a look at the 12-month period from September 2015 to September 2016 displays a more equal division between the three consumer categories. While discoms made 2.2 million buy bids during this period on both exchanges and led the market with a 40 per cent share, the open access category was not far behind with 37 per cent share and 2.1 million bids, and captive consumers made 1.2 million buy bids and held 23 per cent market share. Discoms have now become the largest buyers of RECs owing to the regulatory amendment introduced in December 2014, which made them eligible for REC issuance and trading if the energy bought by these discoms was in surplus of their RPO targets. However, in the amendment, the validity of certificates has been increased by a year to 1,095 days, which has added to the REC glut, even as the shrinking demand shaves off only a small percentage of it. 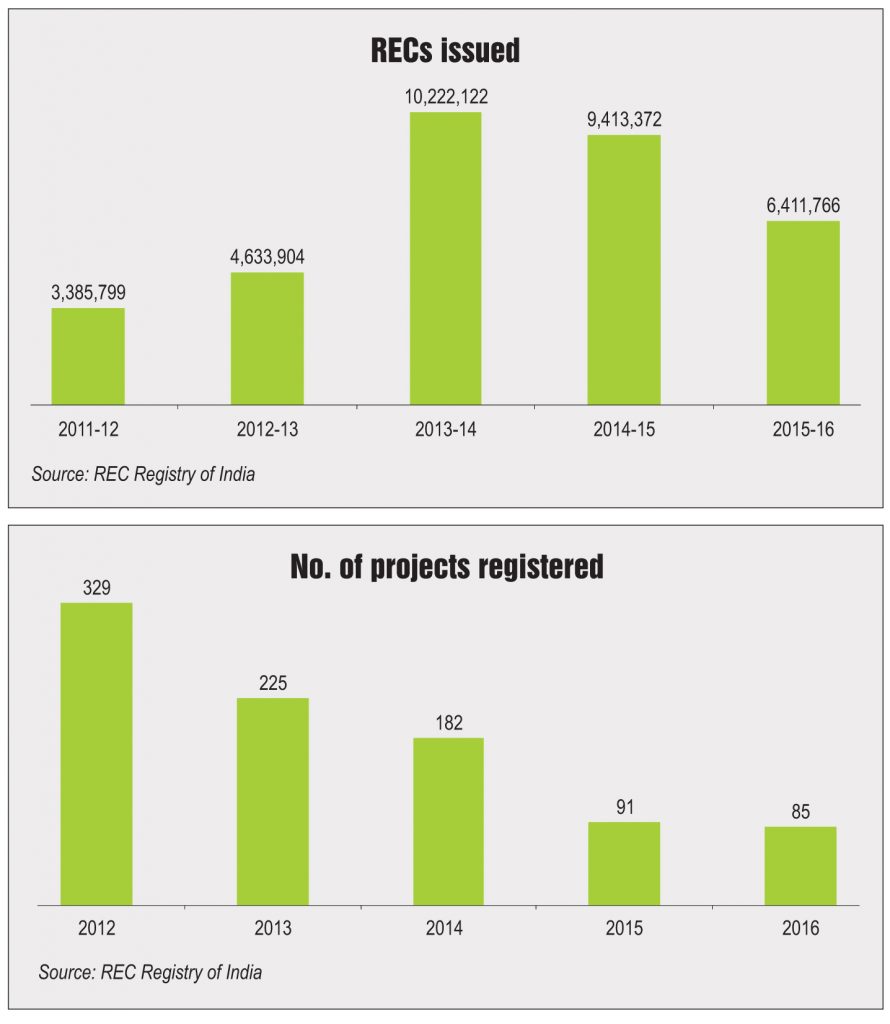 The REC market has been plagued with regulatory inaction against non-compliance of RPO targets by the states. Taking advantage of bureaucratic loopholes and a generally passive approach, most obligated entities such as distribution utilities and open access consumers disregard the RPOs and seldom purchase RECs to fulfil their commitments.

There has been a significant decrease in the number of projects registered for RECs over the past few years, resulting in a year-on-year fall in RECs issued by the agency. During the previous five-year period, REC issuance hit a peak in 2013-14 with 10.2 million RECs issued, following which it has been on a steady decline. In 2014-15, the issuance fell by 7.9 per cent to 9.4 million RECs. It fell further in 2015-16 by 31.9 per cent to around 6.4 million RECs. This decline, attributed to the constantly decreasing number of projects being registered, indicates a lack of belief in RECs as a viable mechanism. In 2012, a total of 329 projects were registered. The number has since been declining consistently. It fell to 225 in 2013, 182 in 2014, 91 in 2015 and 85 in 2016.

The lax enforcement of policies has been the bane of the market with not enough steps being taken by the state regulatory agencies to curb the rampant negligence by all entities to fulfil their obligations. The purpose of the REC mechanism was to enable RPO compliance, reward renewable capacity additions and penalise those responsible for greenhouse gas emissions beyond the permissible limit.

However, the purpose has been defeated due to subdued voluntary participation and poor enforcement, thus making the REC mechanism ineffectual.

In a recent regulatory development, the RPO was revised to 17 per cent by 2022 with a minimum 8 per cent provision for solar energy, up from 3 per cent. Given the ambitious renewable energy targets set by the government, the RPOs will have to be stringently implemented, which may give a fillip to REC trading. However, with the decline in solar and wind capital costs, the power generated from these projects will soon be at par with power from coal plants. This, coupled with the increased acceptance of these technologies, the adoption of rooftop solar and innovative finance schemes may eliminate the need for RPOs and result in the shutting down of the REC market.

Unless the RPOs are strictly implemented and non-compliance penalised heavily, the glut in the REC market will continue. RECs will struggle to find buyers at any price as long as the entities can get away with non-compliance. A clear policy defining strict penalties for not meeting RPO targets and shorter compliance intervals seem to be the only ways to get the REC market moving in a positive direction.