With more than 100 GW of installed generation capacity, global energy giant ENGIE is aiming to be a net zero carbon company by 2045. With a target of installing 80 GW of renewable energy capacity by 2030, it has plans to add 4 GW of installations per year, globally, till 2026, with India acting as a key area of interest. In this interview with Renewable Watch, Amit Jain, Country Manager, ENGIE India, and Chief Operating Officer, Renewables, AMEA, talks about the global renewable energy landscape, the challenges and opportunities in the Indian market, and the outlook for the future. Edited excerpts…

How has the Indian renewable energy sector evolved over the past few years? What have been the key drivers for global players such as Engie to invest in India?

Energy interdependence and independence are critical issues that are being di­s­cussed in all countries, including India. The Russia-Ukraine conflict has led to a realisation amongst nations that there must be independence in terms of energy generation.

Recognising the importance of self-sufficiency, the Indian government announ­ced and launched several programmes and policies to strengthen the existing standard operating procedures for in­ves­ting in the renewable energy space. Cr­ea­ting in-hou­se capacity would benefit both the industry and the market, becau­se the en­tire revenue chain would stay within the country, with no import liabilities. However, the landscape of the Indi­an market is ch­an­ging, as there are pressures on interest ra­tes and on module prices vis-à-vis China.

Engie has a global target of commissioning 4 GW of renewable energy capacity ev­ery year and has recently decided to fo­cus on about 35 countries out of the 70 countries that Engie used to operate in. India is a part of the list of 35 countries in which Engie plans to participate and grow its renewable portfolio, and it sees it as a key country within the AMEA region.

What have been the major achievements for Engie in the past year? What is the comp­any’s current green energy portfolio, both glo­bally and in India? 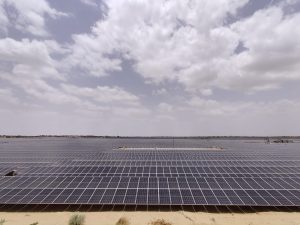 In India, ENGIE operates one of the lar­gest projects for the company globally – the 350 MWp (250 MWac) Kadapa project in Andhra Pradesh. It has another 290 MWp (200 MWac) project situated in the state of Gujarat. Both projects were completed by the company within their budgets and allotted time frames. The company’s portfolio in India is about 1.3 GWp, out of which about 1 GWp is solar power and about 300 MW is wind power.

Globally, the company has a portfolio of about 36 GW of renewables. The company expects to add another 2 GW, to be commissioned by the end of this year, adding up to a total capacity of about 38 GW. Out of this, about 18 GW is hydro­power, 12-13 GW is wind power, 5-6 GW is solar and the remaining is biothermal and biomass.

The company is actively participating in tenders being floated in the market. It is already carrying out a lot of pre-development work on land in the states of Rajasthan, Gujarat and Maharashtra. It is also looking over the potential of commercial and industrial spaces as growth markets. It signed about 1.5 GW of corporate power purchase agreements (PPAs) last year. However, in India, the company has not been active in this space owing to the regulatory challenges and cross-subsidy surcharges. But the recent Electricity Am­endment Act can be helpful in this space. The group captive structures, which previously used to be a state-specific subject, are becoming more robust and better aligned with the global virtual PPA market. With the new power exchanges coming up, the market is becoming liquid for corporate PPAs.

With the global supply disruptions and logistics challenges continuing, what are your thoughts on green energy transition? How has Engie dealt with these upheavals, first during the pandemic and now due to the Russia-Ukraine war?

There are numerous supply chain problems on a global level at present. These difficulties are especially apparent in the wind power segment. The number of players in this segment has declined, and they are more focused on their own geographies. These players have chosen the US as their primary focus, with other markets taking a back seat. India is being employ­ed by them as a manufacturing hub rather than a primary focus, which could be due to the low tariffs. As a result, the government is realising the importance of moving away from the reverse auction methodology to a single-tariff methodology. This shift would help in reflecting the true tariffs. On a global scale, reverse auctions are primarily taking place in India. In other geographies where ENGIE is active, a couple of markets may have a reverse auction feature, but they all have single-part bidding. Moving away from reverse auctions is good for market players, as the operating environment becomes more globally aligned. Moreover, the prime minister’s re­cent announcement about ad­dre­ssing discoms dues is critical, because thi­s is one of the most significant bottlenecks in India compared to other geographies. The inabi­lity of discoms to pay is a direct and indirect hurdle for the entire renewable en­ergy sector. Such reforms facilitate the maturation of the market. Thus, working on sorting this out challenge would en­co­urage international players to invest mo­re capital and be more optimistic ab­out the market.

There have been a host of policy interventions in India in various emerging segments such as green hydrogen, offshore wind, energy storage and round-the-clock power. Which of these areas is the company actively exploring?

There are many emerging segments in the field of renewable energy that are getting policy support. These include green hydrogen, offshore wind energy, battery storage and round-the-clock power. How­ever, all of these are at quite a nas­cent sta­­ge at present. ENGIE is currently ac­tively engaged in 70 green hydrogen pilot projects, globally. The Indian market is still at a developing stage. This is be­ca­u­se, beyond generation, factors such as last-mile connectivity and incentivising in­dustries to use green hydrogen still need to be streamlined.

For the energy storage segment it is important for the government to have different av­enues of revenue for making standard storage successful. India, unfortunately, cu­­­r­rently uses only the peak shifting arr­a­n­gement, wherein there needs to be a shift in the peak tariff before battery storage is used. The tariffs, as a result, are hi­gh­er and create challenges for discoms in terms of affordability. This is just one of the many modes of revenue and pricing.

For offshore wind energy generation, ENGIE has entered a 50-50 joint venture (JV) with EDPR. The JV, Ocean­Win­ds, is actively looking at India as a market to be explored. The government has consider­ed whether to deploy concession ag­ree­ments for offshore rights or create fix­ed tariff PPAs with some governmental support. The development time for offsh­ore wind makes it a long-term investment. It cannot be bid out in a period of one month like solar and wind tenders. These projects require longer gestation periods, which is why it is important for the government to provide a trajectory for bidding. Investments in manufacturing turbines and ports must be made for such projects. Thus, these projects are much more capital-intensive.

Last but not the least, the Global Energy Management Division, another arm of ENGIE, oversees round-the-clock power. It is responsible for packaging the power for customers, and hence, is essentially the trading arm of ENGIE. It is ENGIE’s customer-facing arm, and would be interested in assisting as a renewable arm to pa­ckage power and provide it to custo­mers. It is limited to ENGIE. Here, it buys power from ENGIE, but through other sources, subsequently packages it for customers and provides power 24/7 or as per the client’s demands.

What is your outlook for the Indian renewable energy market?

The Indian government’s policies are moving in the right direction and becoming better aligned with global practices. The El­ec­tricity Amendment Act truly reflects a robu­st move by India towards a buoyant market in renewable energy generation. India remains a very important market, to be ex­plored to its full potential. The Indian ma­rket is so fragmented that it holds en­ough opportunities for all market playe­rs. It is important to understand the challenges, and then factor them into a bid effectively. If these risks are not priced, it can be a cha­llenge to deliver those projects. The stren­g­th of our ENGIE Group helps to override some of these challenges.

The humble battery has come a long way to become a crucial part of storage systems and electric vehicles (EVs), two technologies that are catalysing India’s path to emission reduction. Storage systems have emerged as […]

Through its Niam Infra Fund, the Norwegian real asset manager Niam has joined forces with solar developer Solkompaniet to construct a 500 MW solar portfolio in southern Sweden. The portfolio’s solar projects will be able […]