The manufacturing of solar modules can be classified into two stages – pre-cell or silicon-to-wafer stage and post wafer, that is, wafers-to-cells-and-modules. In India, however, there is very little incentive for domestic players to move into the former. This is because the pre-cell process for making wafers from silicon is highly capital intensive. Moreover, China has a stronghold in this domain. With massive investments and a dominant market share, Chinese players supply cost-effective and efficient wafers.

Although the post-wafer stage up to solar cell and module manufacturing is also largely dominated by Chinese players, many policy interventions are being made by the Indian government to attract investments in this space. In fact, the government has recently launched its Rs 45 billion Production Linked Incentive Scheme, which is expected to add 10 GW of integrated solar PV manufacturing plants in India, thus creating many opportunities for manufacturing equipment providers.

In fact, in June 2021, Chinese manufacturer Jinchen Machinery received solar module production line orders of about 10 GW from Indian companies such as Waaree Energies, Vikram Solar, Tata Power Solar, Adani, Goldi Solar, Premier Energies, Solex and RenewSys. Many of these and other domestic manufacturing firms have announced ambitious plans to enhance their production lines in the coming years.

A look at the common processes, techniques and equipment used to produce crystalline solar cells from wafers, and solar modules from solar cells… 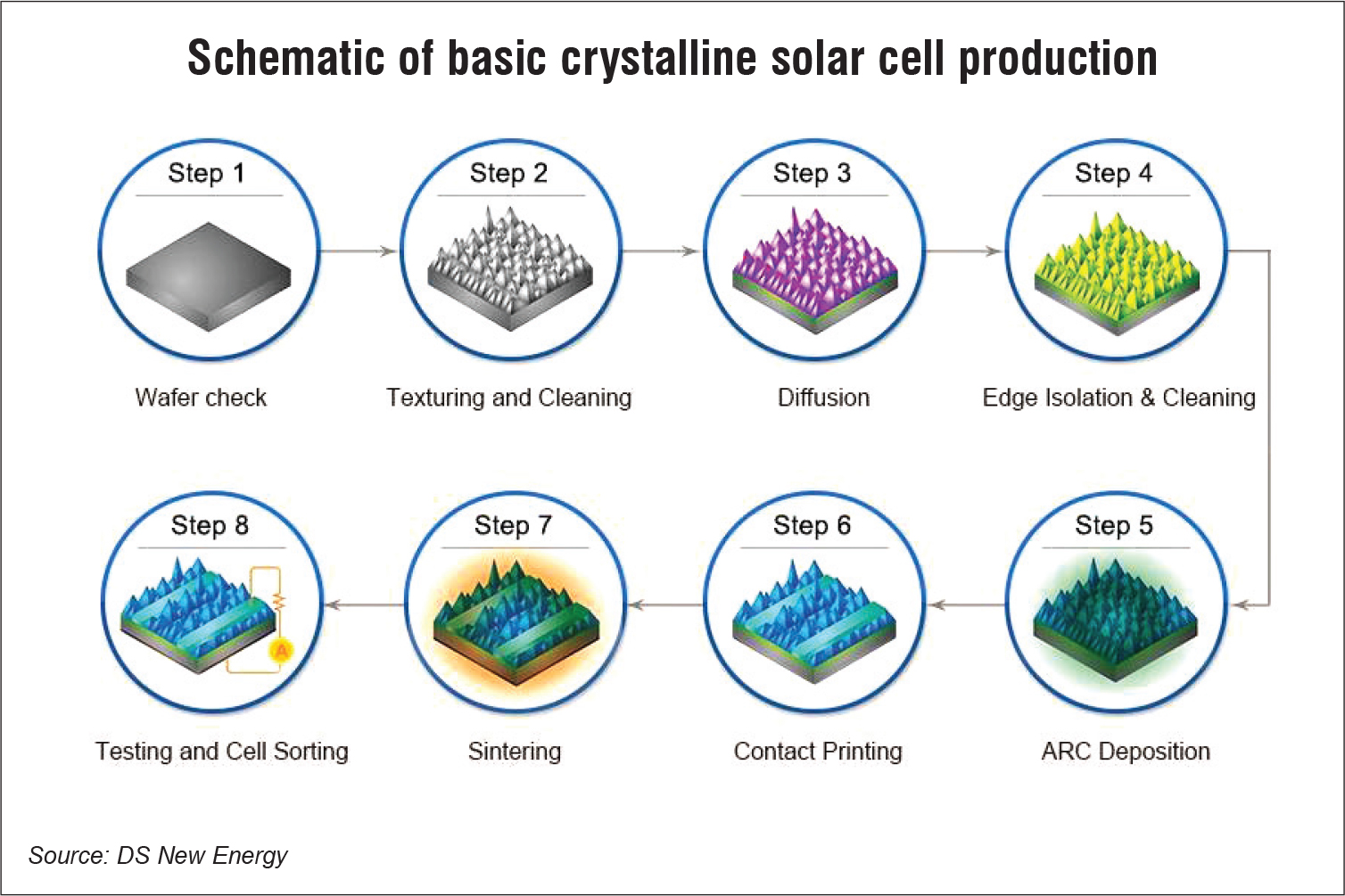 Making a solar cell from silicon wafers is a complicated and highly specialised process with a number of stages. Different equipment is used at each stage, including sensors, temperature controls, clean room products, clean blow products, actuators, vacuums and others. Further, quality control and production environment are of utmost importance, right from wafer checking to the final testing of solar cells.

The cell production process begins with checking the quality of silicon wafers for surface roughness, minority lifetime, resistivity, microcrack and other parameters. Automatic loading and unloading systems, and system integration and detection modules are commonly used at this stage. At the wet station, all contaminants and scratches are removed through cleaning to create a smooth surface. Then, texturing is carried out through random pyramid texturing, inverted pyramid texturing or photolithography to form a micro rough surface for increasing the light receptive area. This is followed by acid cleaning to remove any post-texturing particle remains from the surface.

Emitter diffusion is conducted by adding a dopant like boron, phosphorous or even gallium to the silicon wafer to make it more electrically conductive by passing the wafers through a diffusion coating furnace. Etching and edge isolation using plasma etching with tetrafluoromethane gas has to be carried out to remove the dopant that has diffused not only into the desired wafer surface, but also around the edges and on the backside.

Further, the wafers need to be washed to remove the remains of the previous etching process before an anti-reflective (AR) coating (silicon nitride or titanium oxide) can be deposited on them. The most common method for depositing AR coating is plasma enhanced chemical vapour deposition (PECVD). PECVD equipment contain a thin coating in a gaseous state, which is deposited and solidified onto the wafer. Metal pastes are printed first on the rear side and then on the front side of the wafer with screen printing devices to create ohmic contacts. After drying, a sintering furnace is used to solidify the dry metal pastes onto the wafers to finally form solar cells. The ready solar cells are then tested under simulated sunlight conditions for various parameters. 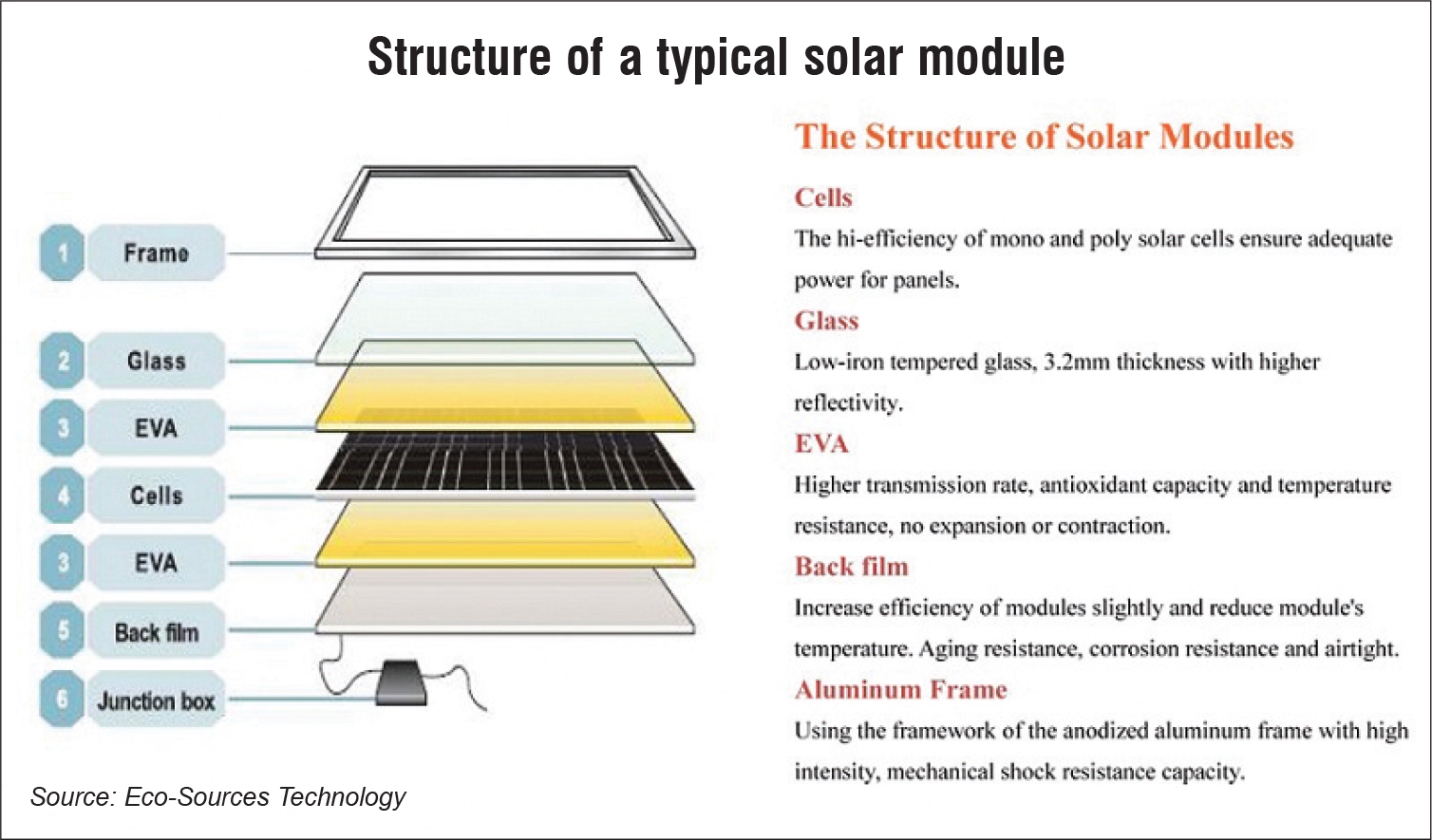 Like solar cells, solar module manufacturing also includes several processes and equipment with apparatuses for quality and temperature control, and various sensors used wherever needed. The large module manufacturing lines are often entirely automated or at least semi-automated to assemble the various parts. The production lines are designed according to the plant manufacturing capacity, machine choice and the PV technology under consideration. Advanced and high precision equipment is required for cutting the rolls of encapsulants and backsheet, the arrangement of glass, welding of heads as well as lamination.

Starting from the top, a solar module is made of an aluminium frame, tempered glass, ethylene vinyl acetate (EVA), solar cells, followed by another layer of EVA, back film and finally a junction box. To manufacture solar modules, the solar cells are aligned and joined in series with a lead frame. The module assembly equipment places a sealant or an encapsulant on a glass panel and aligns the stringed cells in parallel on top. These are covered with a sealent or an encapsulant, and a back film, followed by lamination and sealing with heat and pressure under vacuum to create a semi-finished module. Curing is carried out to harden the sealant. The frame assembly equipment then fits an aluminum frame around the module edged by a cutting machine. A junction box is fitted with the ready solar module, which is then taken for inspection and testing.

The solar PV market is growing by leaps and bounds with the rising demand for solar cells and modules. Owing to intense competition in the solar manufacturing space for greater market share, there is an ever-increasing demand for cost-efficient production equipment with manufacturers scaling up production. Technology is also evolving rapidly and thus, the older obsolete equipment has to be upgraded or replaced with the new PV technologies.

Earlier, the solar PV technology offerings were limited to monocrystalline, multicrystalline and thin-film, but now the range has widened significantly with the emergence of bifacial, heterojunction, perovskite, passivated emitter rear contact and other technologies. Thus, the manufacturing processes and equipment have to be tailored accordingly to cater to the new technologies.

An emerging trend in the manufacturing space is the emphasis on reducing materials in order to save costs, mainly due to price sensitivity in the competitive global markets. According to industry predictions, this is going to be a key focus area in the future as well. Further, with a greater focus on cost optimisation, automation is gaining traction in solar cell and module production. In fact, many equipment providers today supply and install turnkey production lines for solar modules with state-of-the-art automated processes. This is going to be a dominant trend in the coming years as well.

SJVN Green Energy (SGEL), a wholly owned subsidiary of SJVN, has invited bids from contractors to build a 15 MW floating solar project. The project will be executed at Nangal Pond in Himachal Pradesh’s Bilaspur […]

Company Highlights: Key developments in the past 12 months