Due to delays caused by the Covid-19 pandemic, the Indian wind energy sector witnessed its slowest year in 2020, adding a mere 1.1 GW of capacity. Almost 2 GW of installations were either pushed to 2021 or suspended indefinitely. Despite these discouraging trends, the Global Wind Energy Council predicts the sector to bounce back over the next five years. To meet its ambitious growth targets for wind installations, India has set up a strong manufacturing base.

Any wind turbine is incomplete without large blades, which are designed to spin at high speeds and generate electricity. The role of these structures is to absorb the kinetic power of wind and convert it into a rotary motion around a central hub. These components cost as much as 25 per cent of the wind turbine’s cost (based on the levellised cost of energy). This also includes variable costs of maintaining rotor blades as they experience continuous delamination due to rain, frost, etc., which could reduce efficiency by about 9 per cent. Wind technology has advanced tremendously in recent years with research and development (R&D) of larger, more efficient rotor blades using newer materials. With India looking to become a world leader in wind manufacturing, it is important to identify the potential opportunities and challenges in the country’s rotor blade market.

The “Application, Material, and Geography – Forecast and Analysis” predicted that the global rotor blade market will grow at a CAGR of 4 per cent between 2020 and 2024. The falling levellised cost of wind-based electricity is the driving factor of this growth. However, competition from other sources of energy could potentially be a threat. Notably, the study found that about 78 per cent of the market’s overall growth will be driven by countries in the Asia-Pacific region, particularly China and India.

Although well behind China, India has established a strong domestic manufacturing base for wind energy. Further, India meets 70-80 per cent of its demand for wind power equipment through local manufacturing. Notably, since 2017, due to lower domestic demand, exports have risen steadily, reaching over $800 million per annum. This trend is expected to continue owing to the low cost of wind turbines as compared to global prices. At the same time, new players are entering the market while existing manufacturers are expanding their production capacity.

In 2020, India recorded low capacity additions in the wind energy sector, which resulted in a slowdown in the manufacturing sector as well. Of the total capacity added in 2020 (1.1 GW), foreign turbine makers supplied 76 per cent of the total capacity. The top contributor was Siemens Gamesa, which supplied turbines for about 532 MW of wind projects while GE ranked second, commissioning 231 MW of wind installations. About 79 per cent of total wind installations were in Gujarat, followed by Tamil Nadu, Karnataka and Rajasthan.

The most prominent development in the manufacturing sector in recent years has been the entry of leading global players in the Indian market. In 2019, 10 companies including Vivid Solaire Energy Private Limited, Baettr, Eickhoff Wind Asia Private Limited and TPI Composites signed MoUs to establish a manufacturing plant in the country. In addition to rotor blades, these companies will manufacture modular electric switchboards, composite components, turbine components, etc. In 2020, Nordex signed a multi-year agreement with TPI Composites for two manufacturing lines in Chennai. It will expand its supply chain capacity in India to 4 GW to export to the European Union. Around the same time, Enercon also signed a contract with a blade supplier located in India to supply its EP3 and EP5 turbines to international projects.

India has been making steady progress in wind turbine blade technology. In 2018, domestic giant Suzlon designed India’s largest wind turbine at a length of 63 metres. The blade was engineered with a carbon girder, which allows utilisation of thinner aerodynamic profiles and provides a higher lift. The company also introduced an innovative twofold transport system, which uses a specialised adapter trailer to ensure safe and unbound manoeuvrability in hilly terrain. More recently, Vestas India launched a turbine optimised for low and ultra-low wind project conditions in India. The prototype installation has been planned for 2021, while serial production is expected in the first quarter of 2022.

In January 2021, the National Institute of Wind Energy released a white paper highlighting the opportunities in wind turbine R&D by 2030. The document called for relevant agencies to explore large, flexible rotors as well as control techniques to reduce blade noise, and increased tip speed at existing noise levels. Further, it called for the development of load-reducing technologies such as control surfaces and flexible blade technology that can facilitate active flow control systems and improve rotor control dynamics. 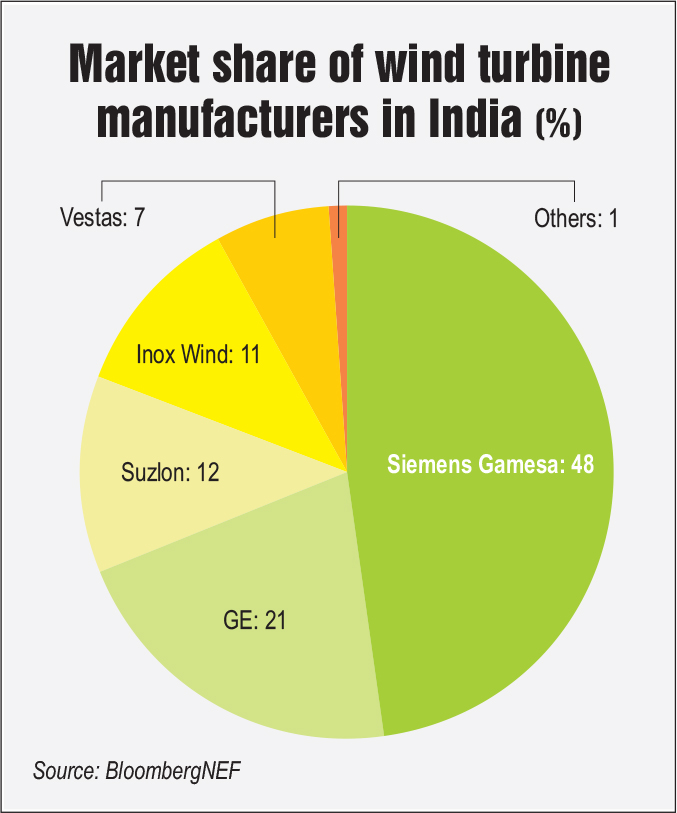 Although India’s manufacturing capacity and export prospects are steadily increasing, there is a need to focus attention towards transportation and logistics. The country has a patchy and incomplete road network. As per the Ministry of Road Transport and Highways, only about 65 per cent of roads in India have been paved so far. In comparison, China has about 90 per cent of its roads paved. New blades that are made for modern-day turbines (2-3 MW) can span lengths of 40-63 metres, which is about the size of an Olympic-sized swimming pool.

The transportation of these components is categorised as “over-dimensional cargo”, as it protrudes from the truck while transporting. Transportation costs make up as much as 8 per cent of the cost of the wind project, as reported by the Wind Independent Power Producers Association. Further, wind developers spend as much as Rs 500,000 per MW for the transportation of equipment. The problem is amplified by the fact that most of India’s wind projects are located in remote areas and in many cases, large transporting trucks are stuck in narrow roads.

To achieve a lower levellised cost of energy in the wind energy sector, improving logistics is critical. Access to project sites can reduce project costs by about 5 per cent, which will be reflected by the tariffs as well. Hence, road development plans must be in line with the upcoming renewable energy projects. Further, developers must adopt newer and safer methods for the transport of blades. Blades can be transported through extendable trailers and hydraulic axles. Developers have found that hiring a telescopic trailer reduces transportation cost, skilled manpower requirement and the turning radius rate at wind farm sites in comparison to traditional flatbed mechanical trailers. Further, the transit time taken by telescopic trailers is less than that of mechanical trailers.

While more efficient means of transport are being developed for rotor blades, critical transportation of rotor blade adapters has not made much headway in India. The main reason for this is the prohibitive cost as the market remains price sensitive. To address this, manufacturers like Ashok Leyland, Tata, Man Trucks and Volvo Eicher have launched their Pro Series trucks while TII India has started manufacturing hydraulic trailers locally. These are positive developments for the industry.

As materials comprise up to 50 per cent of the cost of a manufactured turbine blade, new materials and materials characterisation offer scope for significant cost reductions. Further, India has created a strong domestic manufacturing base for rotor blades and other wind components. This base is well equipped to supply to domestic projects as well as international projects owing to its low cost of production. Top wind manufacturers are expanding their manufacturing capacity in India and introducing new technologies. However, logistical challenges in the domestic sector must be addressed by the government and private players.

Going forward, India must leverage its wind manufacturing base. With over 16 GW of wind capacity expected to be installed between 2021 and 2025, the manufacturing sector must aim to meet this demand, in addition to exports. After 2025, the Indian wind industry could explore options for repowering old turbines and setting up offshore farms.