Eden Renewables India is a renewable energy company incorporated in 2016 as a joint venture (JV) between Total Eren and EDF Renewables, both of which entered the Indian market in 2013. The company focuses on long-term investments in the solar photovoltaic (PV) space with public and private counterparties in India. The services offered by Eden include project development, engineering, financing, construction, asset management, and operations and maintenance. Eden Renewables currently has 207 MWp of operating solar plants, 450 MWp under construction, and over 1,600 MWp under development. The company plans to increase its installed capacity to 2,200 MWp by early 2022. The projects executed by the company are primarily large-scale grid-connected projects with central and state offtakers. The company has been performing well with an active participation in renewable energy auctions.

The 120 MWp Bap solar facility, named after the village where it is located, was commissioned in 2015. The project received financing in 2014 from local and international financing institutions, including the International Finance Corporation and the Asian Development Bank. It was refinanced in 2020 by NHDC Limited. Bap is Total Eren’s and EDF Renewables’ first and largest operational solar PV power plant in India. The solar facility comprises five projects and 795,168 solar panels based on both thin-film and polycrystalline technologies. The power purchase agreement (PPA) for these projects was signed with the Solar Energy Corporation of India (SECI) in 2014 for a 25-year period.

In November 2017, EREN Renewable Energy and EDF Energies Nouvelles announced the commissioning of three solar plants with a total installed capacity of 87 MWp – two projects in Uttarakhand, and the Semli project in Madhya Pradesh. The projects were set up through their solar PV JV in India, Eden.

The solar power plants in Uttarakhand have about 225,000 panels and a combined capacity of 72 MWp each. In the auction launched by the Uttarakhand Renewable Energy Development Agency in 2013 for developing renewable energy capacity, a consortium of Omkar Powertech India Private Limited, Profigate Infra Gasoline and Rays Power Infra Private Limited emerged as the winner. EDF Energies Nouvelles, EREN RE and Rays Power Infra Limited have a joint ownership of the two installations. A 25-year PPA has been signed with the Uttarakhand Power Corporation for the two projects.

The Semli solar project was launched in 2017. The project has an installed capacity of 15 MWp, and consists of 130,440 thin-film solar panels. The project was won at an auction conducted by Madhya Pradesh Power Management Company Limited (MPPMCL) in 2015. A 25-year PPA was signed with MPPMCL. EDEN arranged the financing from local institutions and supervised the construction of these three solar power plants, which were acquired in 2016 and 2017.

In July 2019, Eden Renewables signed PPAs for four solar projects with a cumulative capacity of 716 MWp (490 MWac) in northern India. Of the four PPAs, one was signed with SECI for a 450 MWp (300 MWac) solar project in Rajasthan. The capacity was awarded to Eden Renewables for a winning tariff of Rs 2.60 per kWh at the SECI (Tranche III) auction for 1.2 GW of solar capacity. The tender was initially floated in January 2019, and capacities were allotted in the following month. In January 2021, Eden Renewables announced financial closure for the solar project. The company reported that it successfully financed the project through a green limited recourse project term loan of $165 million provided by DBS Bank Limited, Standard Chartered Bank and the Singapore branch of the Sumitomo Mitsui Banking Corporation.

For the remaining capacities, the company entered into PPAs with Uttar Pradesh Power Corporation Limited for two solar projects of 98 MWp each and one of 70 MWp. Construction has reportedly commenced for these projects and they are expected to be commissioned in the first half of 2021.

In 2020, Eden Renewables India was awarded three solar projects of 450 MWp each, totalling up to a capacity of 1,350 MWp (900 MWac), which are currently being developed in Rajasthan. Of the total capacity, the company secured 450 MWp (300 MWac) at a tariff of Rs 2.50 per kWh allotted at the SECI (Tranche VIII) auction in February 2020. The tender was initially floated in December 2019 for a total capacity of 1.2 GW. In January 2021, the company received approval from the Central Electricity Authority to construct transmission lines for the project, which is located in the Lakhasar Village, Jaisalmer district, Rajasthan. In June 2020, the company secured another 450 MWp (300 MWac) at the SECI (Tranche IX) auction for 2 GW of solar capacity. Eden Renewables quoted a winning tariff of Rs 2.37 per kWh. The remaining 450 MWp (300 MWac) was allotted under a tender floated by NHPC Limited. The PPA for the project was signed in August 2020 at a tariff of Rs 2.55 per kWh. Construction is scheduled to begin in the first half of 2021 and the projects will be commissioned at the end of 2022. 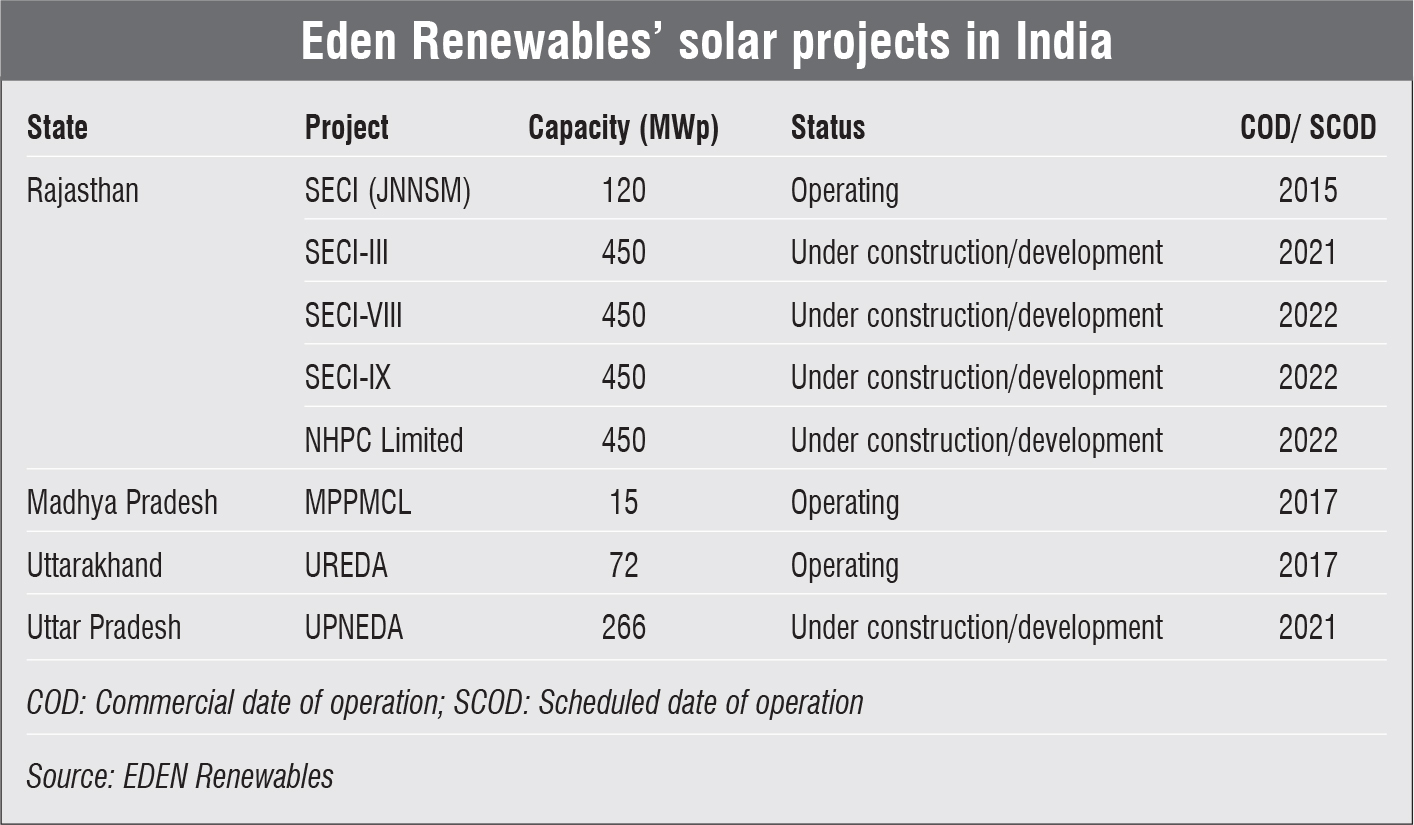 EDF Renewables is an international renewable energy company with a gross installed capacity of 13.2 GW worldwide. It mainly focuses on wind and solar PV power. The company is also active in segments such as offshore wind power and energy storage. Meanwhile, Total Eren was established in 2012. It develops, finances, builds and operates renewable energy power plants. Total Eren’s global portfolio comprises a gross capacity of more than 3,300 MW, both operational and under construction. In addition to its focus on pure-play solar, Total Eren is exploring the wind and hybrid projects in India.

The EDF Group has a Cap 2030 strategy of doubling its global renewable energy net capacity in operation from 28 GW to 50 GW between 2015 and 2030. Further, Total Eren aims to achieve a gross installed renewable energy capacity of more than 5 GW by 2022. However, the company still has a small operational portfolio as compared to its multi-GW competitors that have a pan-India presence. Further, issues like land acquisition, transmission unavailability, delayed payments and lack of contract sanctity continue to impact IPPs and may make it more challenging for the company to reach 2,200 MWp by next year.

On the bright side, Eden Renewables India is backed by Total Eren and EDF Renewables, both of which have strong balance sheets. So far, EDF Renewables has channelled about Rs 12.5 billion of investments in India. With strong shareholders, ambitious capacity targets and an appetite for developing renewable energy projects, a healthy pipeline of projects can be expected in the coming years from Eden Renewables India.