The year 2020 saw a mix of positives and negatives for renewable energy financing. The downside was a significant decline in debt activity, as Covid-19 worsened the condition of the banking sector and the stream of loans from non-banking financial companies (NBFCs) remained modest. However, despite the setback on the debt front, the Indian renewable energy market continued to be an attractive one for large global equity investors. Thus, although domestic lenders continued to remain cautious owing to Covid-19 challenges and perceived risks regarding payment delays, contract sanctity and construction timelines, a series of merger and acquisition (M&A) deals were signed as large investors focused on portfolio expansion.

Equity financing continued to dominate renewable energy investments during the past year. Many business groups that had entered the renewable energy sector in the past few years are now looking to sell their solar portfolios. This bodes well for large investors with deep pockets, who want to expand their asset base quickly without

having to go through the lengthy process of winning a bid, getting the required approvals and implementing the project.

Renewable Watch tracked 17 equity deals during the year, of which the biggest was the $980 million deal between ORIX and Greenko for a 20 per cent stake in the latter. 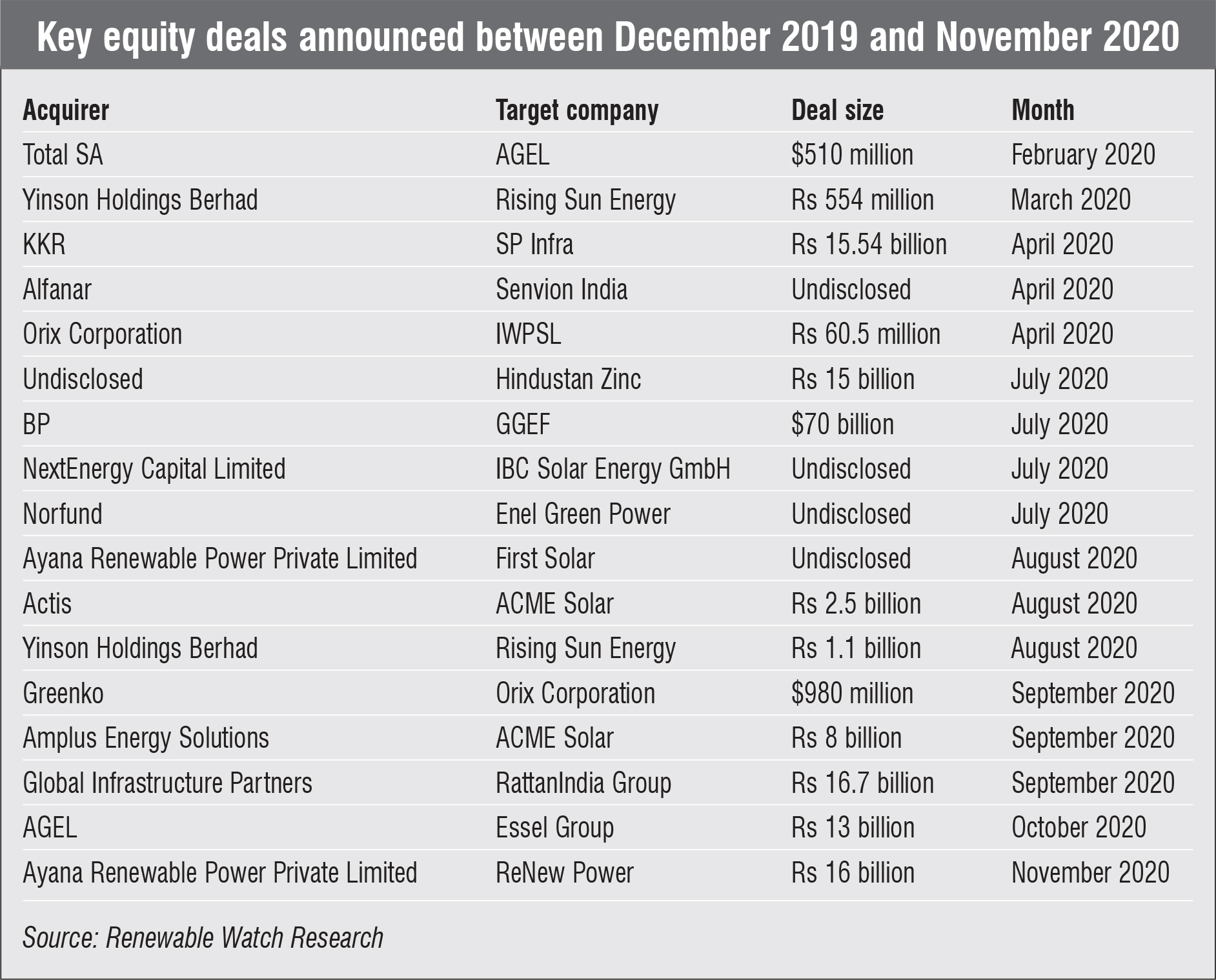 Debt activity has been on the decline in recent years, primarily due to the fragile state of the banking sector and the volatility of the rupee in global markets. Thus, over the past 12 months the participation by domestic commercial banks has been almost negligible and the majority of the financing has been done through NBFCs. Nevertheless, a number of loan agreements were signed with multilateral institutions such as the Asian Development Bank (ADB), the Asian Infrastructure Investment Bank (AIIB) and KfW Development Bank, despite the Covid-19 situation.

While conventional financing instruments such as debt may have seen a decline in recent months, alternative options are emerging for developers to finance their projects. The most popular of these are green bonds, although 2020 witnessed few such issuances. ReNew Power issued bonds worth $450 million in January 2020 and another $325 million in October 2020, CLP Wind Farms (India) Private Limited raised Rs 2.96 billion through green bonds in October 2020. The smaller number of issuances can be attributed to Covid-19 uncertainties, as companies are waiting for the market to stabilise. Meanwhile, Azure Power plans to issue a green bond offering of $350 million, while Urja Global Limited plans to issue green bonds of up to $500 million to finance its renewable energy projects and expand its electric vehicle business. Moreover, AGEL plans to raise up to $12 billion by selling green bonds over the next four to five years. The company expects to raise $2 billion-$3 billion annually from the sale of these green bonds. The sale is likely to start in May 2021, and the proceeds will be used towards the production of non-conventional energy. Another emerging financial instrument is the infrastructure investment trust (InvIT), and Tata Power may soon become one of the first companies in the renewable energy sector to use this route for financing. In July 2020, Tata Power selected seven out of 15 investors for its InvIT. The seven investors that will enter the due diligence phase are Petronas, Mubadala, Brookfield, Caisse de dépôt et placement du Québec, KKR, APG and Omers. In June 2020, Tata Power’s board gave its in-principle approval to the InvIT.

The resolution of stressed assets assumed importance during the past year, with two major wind manufacturers running into heavy unsustainable losses. In December 2019, the National Company Law Tribunal initiated a corporate insolvency resolution process for ReGen Powertech, a Chennai-based wind turbine manufacturer. ReGen stopped making turbines in 2018 after the central government notified the auction mechanism for awarding wind energy projects. It took up operations and maintenance work, which was inadequate to sustain the company. Further, in March 2020, Suzlon Energy received approval from its lenders, led by the State Bank of India, to restructure its debt, worth Rs 140 billion. It concluded its debt restructuring in July 2020 and has to now repay a sustainable debt in the first 10 years. The remaining portion is to be paid over the next 20 years as optionally convertible debentures and compulsorily convertible preference shares. The plan also includes promoter entities infusing around Rs 4 billion equity into the company.

The dynamics of financing renewable energy projects in India have evolved, as the sector undergoes a paradigm shift. Access to competitive finance has become a major challenge owing to Covid-19 and the unresolved issues of delays in payment and land acquisition, and transmission unavailability. Regulatory uncertainties, especially in the open access and rooftop solar space, have further hit investment prospects.

Consolidation continues to be a major trend as these challenges and risks may make it tough for smaller companies to sustain themselves, especially in the face of low tariffs, thus making them easy targets for larger players. The good news is that there is huge market demand for operational assets owing to pipeline restrictions on account of commissioning delays, and these operational assets attract good valuations. The improvement in the exit environment is a positive for the segment, as with more foreign capital coming in, other such assets could be changing hands in the near future. 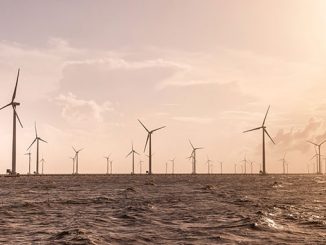 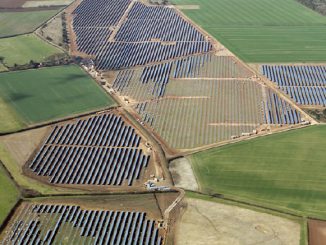 January 12, 2022
Microgrids are small, localised grids that produce, distribute and consume electricity. They have the au­tonomy to disconnect from the traditional gr...
More