Covid-19 disrupted the utility-scale solar segment in a way that was unprecedented. Despite the havoc caused by the pandemic, the segment emerged resilient. The industry not only achieved record low tariffs consistently but also explored opportunities for domestic manufacturing. In addition, the transition to more efficient monocrystalline module technology continued unhampered. Foreign investors continued to infuse funds into the industry, facilitating both organic and inorganic growth and demonstrating their confidence in the Indian solar segment.

Another milestone was the Rs 2.36 per kWh tariff, which was discovered in July 2020 for SECI’s 2 GW ISTS Tranche IX solar auction. It was quoted by Spanish developer Solarpack Corporacion Tecnologica SA for 300 MW of project capacity. Other successful bidders were Enel, Eden Renewables and Ib vogt, which secured 300 MW of capacity each at a tariff of Rs 2.37 per kWh. At the same tariff, Amp Energy won 100 MW. ReNew Power and Ayana Renewable won 400 MW and 300 MW, respectively, at Rs 2.38 per kWh. The key reasons for the record low tariff were zero safeguard duty for developers, low-cost financing and a pass-through from basic customs duty under change-in-law provisions.

In October 2020, EDEN Renewables India secured contracts for three solar projects with a cumulative capacity of 1,350 MWp to be set up in Rajasthan. Of the contracts, the company secured two 450 MWp of projects from SECI under ISTS tranches VIII and IX, respectively, and one 450 MWp project from NHPC Limited.

For NHPC Limited’s 2 GW ISTS-connected solar projects auctioned in April 2020, Softbank, Axis Energy Ventures, O2 Power and EDEN Renewables were awarded 600 MW, 400 MW, 380 MW and 300 MW, respectively, at a tariff of Rs 2.55 per kWh. Avaada Energy won 320 MW (it had placed a bid for 600 MW) at a tariff of Rs 2.56 per kWh. These successful auctions at low prices made the year positive for the utility-scale solar power segment, which industry experts had anticipated would get eclipsed by the Covid-19 pandemic. This immensely helped in enhancing the confidence of investors as well as developers.

Undersubscription, cancellation of some auctions

Not all auctions conducted through the year were successful. Some were either cancelled or undersubscribed, primarily due to the disruptions cause by the pandemic. The most notable was the cancellation of 1.4 GW of solar projects of the 2 GW auctioned under NTPC Limited due to regulatory delays. The cancelled projects were awarded to ACME Solar (600 MW), Shapoorji Pallonji (500 MW) and Azure Power (300 MW). Just 600 MW awarded to SB Energy at a tariff of Rs 2.60 per kWh was not cancelled. This happened in January 2020. In the same month, the Uttar Pradesh New and Renewable Energy Development Agency’s 500 MW solar tender was undersubscribed by 268 MW. Therefore, only 80 per cent of subscribed bids (amounting to 184 MW) were auctioned. Ib vogt won 50 MW (Rs 3.17 per kWh), Jackson won two projects of 50 MW each (both at Rs 3.18 per kWh), Vijay Printing Press won 25 MW (Rs 3.18 per kWh) and Solarise won 9 MW (Rs 3.18 per kWh).

Later, in March 2020, Gujarat Urja Vikas Nigam Limited’s tender for 500 MW of grid-connected solar projects was also undersubscribed by 70 MW. A capacity of 350 MW was auctioned for this tender in which Vena Energy, Juniper Green Energy and Tata Power won 40 MW (at a tariff of Rs 2.61 per kWh), 190 MW (at Rs 2.63 per kWh) and 120 MW (at Rs 2.64 per kWh). In the same month, Maharashtra State Electricity Distribution Company Limited’s tender for the long-term procurement of power from Phase V of 500 MW of intra-state grid-connected solar power projects was also undersubscribed by 150 MW. Avaada Energy and Tata Power bid for 250 MW and 100 MW respectively. The cancellation of these auctions points to the key challenges that are still lingering in the solar segment. These include land acquisition, transmission unavailability, unpaid dues from discoms and delays in ensuring contract sanctity. 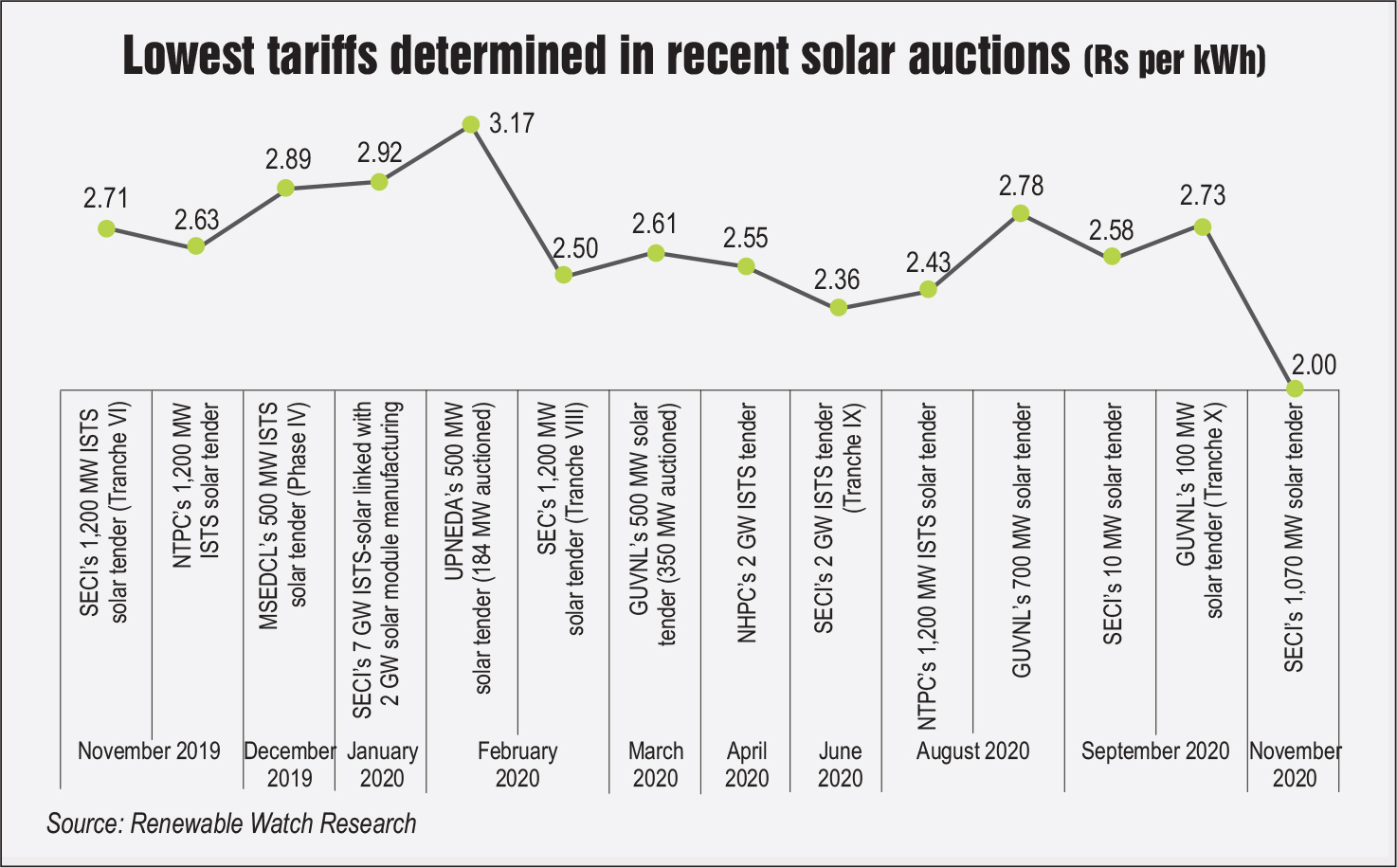 The growth of domestic manufacturing of solar PV cells and modules has not kept pace with the large-scale solar power capacity development. China still accounts for the majority of India’s solar PV imports. This became worrisome for the government and the industry when the supply chains were blocked with the onset of Covid-19. In the past one year, the central government has introduced measures such as the imposition of safeguard duties and issued large manufacturing-linked tenders to promote manufacturing. And the Atmanirbhar Bharat campaign has further given it a boost. The government is also considering setting up solar equipment manufacturing units near ports in order to make the segment cost competitive and export oriented. According to the government, nearly 110,000 hectares of land is available across 12 major ports.

The private sector is quite enthusiastic about exploiting this opportunity. In July 2020, ReNew Power announced its plan to manufacture solar cells and modules in India and laid out its Rs 15 billion-Rs 20 billion investment plan for setting up a facility, with an initial manufacturing capacity of 2 GW. The company is in discussions with various states to set up this unit.

According to TERI, the solar segment is expected to grow by 10-20 GW per year. This would not only benefit domestic manufacturers but also create nearly 100,000 jobs in solar manufacturing and save $2.5 billion-$5 billion in annual forex outgo. However, going forward, the promotion of domestic manufacturing will be full of hurdles, as the segment faces the challenges of higher manufacturing costs (which ironically include high grid tariffs), underutilisation of manufacturing facilities, lack of clarity on the policy front and high interest rates.

In order to improve the efficiency of utility-scale solar projects, developers have started shifting from multicrystalline to monocrystalline technology. In the past one year, this trend has continued and there have been positive developments in the monocrystalline space. In September 2020, Indian Oil Corporation Limited (IOCL) invited bids for setting up a 2.75 MW grid-connected ground-mounted solar power project at the IOCL LPG bottling plant in Trichy, Tamil Nadu. IOCL specified that it will use both polycrystalline and monocrystalline silicon modules. In the same month, Kerala State Electronics Development Corporation Limited (KELTRON) invited bids from domestic solar PV module manufacturers for the supply of 6,500 monocrystalline solar modules for a 2 MW solar power project.

Apart from growing organically by winning and participating in tenders, the industry focused on inorganic growth by buying solar assets. The latter was assisted by the sellers of solar assets looking to exit the market or increase liquidity to bring down debt. Overall, the entry of foreign investors in the utility-scale solar segment aided this process.

In September 2020, the RattanIndia Group sold 306 MW of solar assets to Global Infrastructure Partners for Rs 16.7 billion. Of this, 297 MW of assets were ground-mounted solar projects spread across Pavagada in Karnataka, Katol in Maharashtra, Bhadla in Rajasthan, Allahabad and Bareilly in Uttar Pradesh. The remaining 9 MW were rooftop solar projects. Earlier, in December 2019, Vector Green Energy Private Limited acquired 225 MW of solar projects from RattanIndia.

Petronas, through Amplus Energy Solutions, acquired 100 MW of solar assets from ACME Solar in September 2020. The capacity is located in Karnataka’s Pavagada Solar Park. The deal was reportedly valued at around Rs 8 billion.

In August 2020, Actis, the UK-based fund, also acquired two solar assets with a cumulative capacity of 400 MW from ACME Solar for Rs 2.5 billion. These assets are located in Andhra Pradesh and Madhya Pradesh. In the same month, Ayana Renewable acquired a 100 per cent equity stake in two solar power projects with a cumulative capacity of 40 MW. The projects have been developed by First Solar and are located in Karnataka. In May 2020, Shapoorji Pallonji Infrastructure Capital signed an agreement with KKR to sell five of its operational solar power assets for Rs 15.54 billion. The portfolio comprises 169 MW of solar assets in Maharashtra and 148 MW in Tamil Nadu. In April 2020, Total invested around Rs 3.7 billion for a 50 per cent stake in a joint venture with AGEL.

In January 2020, Swedish private equity company EQT Infrastructure and Singapore-based holdings company Temasek launched O2 Power, which plans to develop 4 GW of solar and wind capacity in India. The platform has already received $500 million of equity commitments from EQT and Temasek. In the same month, ENGIE, a French multinational electric utility company, decided to sell a 74 per cent stake in its solar assets spread across India. Under the agreement, ENGIE decided to sell 12 solar assets with a total operating capacity of 813 MW to Edelweiss Infrastructure Yield Plus (EIYP) and Sekura Energy Limited, a portfolio company of EIYP.

Impact of Covid-19 and future outlook

Covid-19 and its disruptions were by far the biggest challenge that the solar segment in India has had to face. Utility-scale solar projects across Maharashtra, Gujarat, Rajasthan, Madhya Pradesh and Telangana were impacted more. These projects faced severe supply-side constraints because of logistics and supply chain concerns and the shutdown of most of the manufacturing facilities at the time. Also, with the depreciation of the rupee, there were concerns regarding increase in equipment costs. For operational solar projects, it was difficult to source manpower and carry out operations and maintenance. The projects under-construction were shut and there were delays in getting regulatory approvals. Even the projects for which PPAs had been signed, there were issues such as delays in financial closure and land handover. To iron out these problems, Covid-19 was declared a force majeure event and commissioning timelines for solar projects were extended. Considering that the issues of land acquisition and transmission unavailability are inherent to the segment, a further pushback in commissioning deadlines can be expected. The majority of under-construction projects are stuck and would only be able to start operating provided the developers get land approvals and transmission connectivity. Moreover, these projects would need PPAs and tariff approvals for timely financial closure. Covid-19 has exacerbated the situation and further elongated the timelines of the already delayed projects.

The biggest impact was on financing. India was already going through a banking crisis and Covid-19 deepened it. The availability of finance was severely affected as banks were cautious in giving loans, even for working capital requirements. This issue still persists and could have a long-term impact on the viability of the solar segment. A key highlight was ACME Solar cancelling its pact with SECI to supply power from the 600 MW project in Rajasthan at a tariff of Rs 2.44 per kWh. In its petition to the Central Electricity Regulatory Commission, the company cited the pandemic as one of the reasons for terminating the agreement.

However, every cloud has a silver lining. Interestingly, now there is a greater political will to improve the financial health of distribution companies. This would benefit the payment security of solar project developers.

The record low tariffs achieved in July 2020 and then in November 2020 indicate the positive industry sentiment. These developments and the influx of cheaper foreign capital are expected to improve the outlook for the solar power segment. 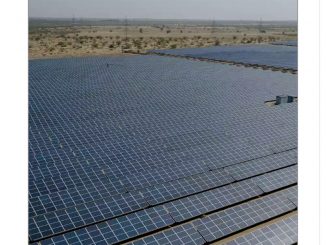 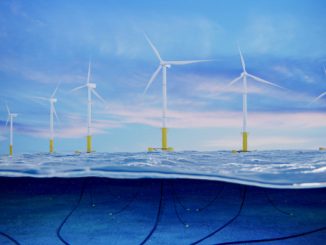 July 21, 2022
The Crown Estate of the UK has been granted authorisation to enter into leasing agreements for six fixed offshore wind projects totaling about 8 GW. T...
More