India’s utility-scale solar parks have proved to be a successful model, withstanding many policy hurdles and implementation issues. Many of the solar parks in the country have a capacity of over 1 GW and are called ultra mega solar parks. According to the Institute for Energy Economics and Financial Analysis (IEEFA), India has pioneered the concept of the ultra mega power plant (UMPP) in a single solar park. However, this may be affected due to the recent outbreak of coronavirus and its impact on the industry. In the UMPP model, the state government or distribution company facilitates a single grid connection and takes care of procurement and land acquisition. These solar parks have attracted a considerable global investment. They have also been instrumental in the growing economies of scale, which have reduced solar tariffs to record lows.

As per the IEEFA’s study on utility-scale solar parks, the solar park model has helped address three key risks – project execution risk, offtaker risk and operations and maintenance (O&M) risk. The first risk refers to the difficulties faced in the process of land acquisition. To help in land acquisition, the state-level government agencies have facilitated the process of acquiring government-owned as well as privately owned land. Further, these agencies have taken on the task of providing connections to the nearest substations. Financial stress on distribution companies across states leads to offtaker risk. To this end, government-backed entities Solar Energy Corporation of India (SECI) and NTPC Limited have signed power purchase agreements (PPAs) with distribution companies, making the contracts more robust. The mandate to build and maintain roads to make project sites accessible has eased the O&M risk.

In December 2014, the Ministry of New and Renewable Energy (MNRE) introduced a scheme for the Development of Solar Parks and Ultra Mega Solar Power Projects. Under this scheme, setting up of at least 25 solar parks and UMPPs was proposed, targeting over 20 GW of installed solar power capacity within a span of five years, starting from 2014-15. This target was further increased in 2017 to 40 GW of capacity under solar parks by 2022. The objective of the scheme was to help overcome implementation challenges and facilitate solar project developers to set up projects in a plug-and-play model. This scheme will be valid up to 2021-22.

The scheme aims to facilitate the installation of grid-connected solar power projects for electricity generation on a large scale. The eligible solar parks should have a capacity of over 500 MW. Smaller parks are also considered in cases where contiguous land may be difficult to acquire in view of difficult terrain or there is acute shortage of non-agricultural land. There are eight modes for the selection of a solar park power developer, with the eighth mode being added recently. 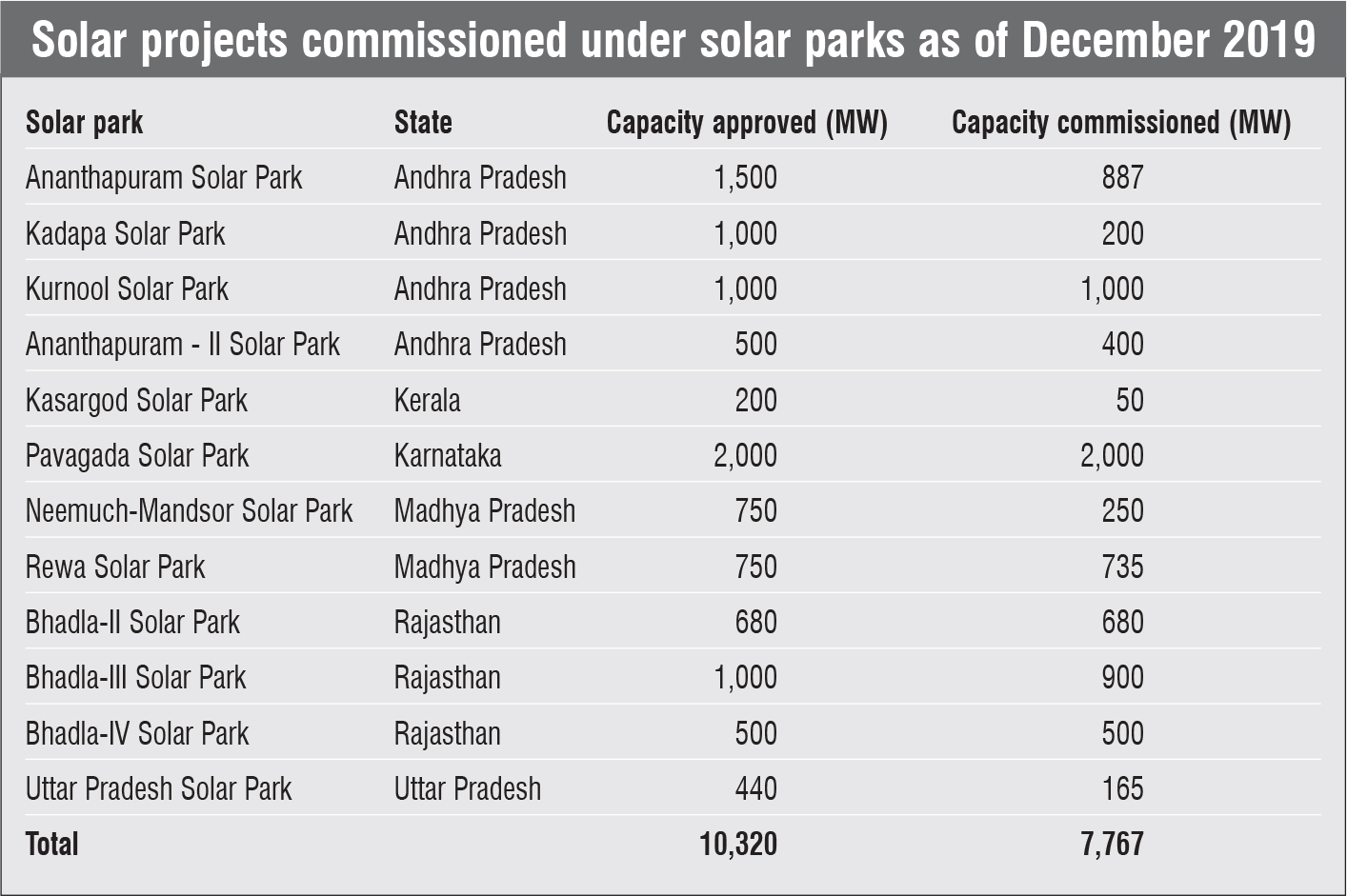 A cumulative capacity of 4 GW has been sanctioned by the MNRE to the state of Andhra Pradesh for the development of solar parks. These parks are being developed in Ananthapuramu, Kurnool and YSR Kadapa districts. As of February 2020, ENGIE has commissioned 250 MW of solar power capacity in Kadapa, Andhra Pradesh. Of this, 200 MW was commissioned in May 2019, while the last leg was finished in 2020. In December 2019, Andhra Pradesh Solar Power Corporation Private Limited issued O&M tenders for 1.5 GW of solar projects at Ananthapuramu and 1 GW of projects at the Kurnool ultra mega solar park. In November 2019, the MNRE announced that the Andhra Pradesh government will develop a cumulative capacity of 1,160 MW of ultra mega solar parks in the taluks of Nambulapulakunta (1,000 MW) and Ramagiri (160 MW). Meanwhile, three large solar parks have been sanctioned for the state of Gujarat. These are the Radhnesada Solar Park with a capacity of 700 MW, the Harsad Solar Park with 500 MW and the Dholera Solar Park, which is divided into two phases of 1,000 MW and 4,000 MW. The Dholera Solar Park is expected to cover an area of more than 27,000 acres upon completion. Of the total 1,000 MW capacity under Phase 1, the auction process for 300 MW was completed. In March 2020, while the remaining 700 MW capacity has been retendered.

The Pavagada Solar Park in Karnataka has an operational capacity of 2,050 MW, making it the second largest solar park in India and globally. The proposal to construct the Pavagada Solar Park was approved by Karnataka Solar Power Development Corporation Limited in 2015. The project is spread over 53 square km, spanning five villages – Balasamudra, Tirumani, Kyataganacharlu, Vallur and Rayacharlu. The last leg of 200 MW capacity was completed by SB Energy in December 2019, making it the world’s largest solar PV power station, with a functional capacity of 2,050 MW. Of the total capacity, NTPC implemented 600 MW, SECI 200 MW and Karnataka Renewable Energy Development Limited 1,250 MW. 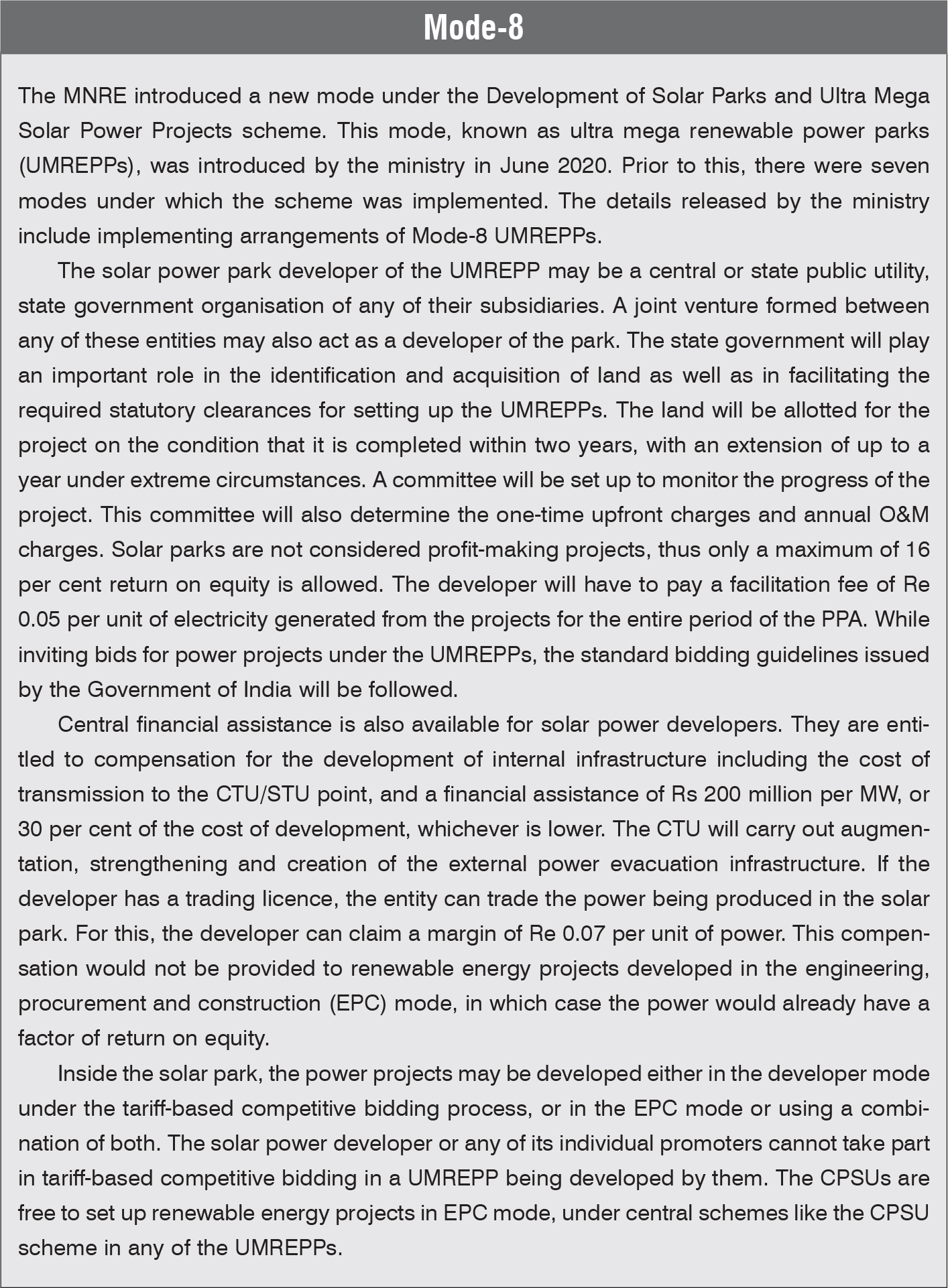 Maharashtra has also been sanctioned three solar parks of 500 MW each. These are the Sai Guru Solar Park (Pragat), the Patoda Solar Park (Paramount) and the Dondaicha Solar Park. Earlier this year, SECI auctioned 250 MW of grid-connected solar power projects under Phase I of the Dondaicha Solar Park in Dhule. Talettutayi Solar (Solar Arise) quoted the lowest tariff of Rs 2.87 per kWh to develop 50 MW of capacity. The remaining capacity was allocated to Tata Power and NTPC with each getting 100 MW.

Madhya Pradesh’s first large solar park, the Rewa Ultra Mega Solar Park has a nameplate capacity of 750 MW. The solar park is being implemented by Rewa Ultra Mega Solar Limited, a joint venture of the state government-owned Madhya Pradesh UrjaVikas Nigam Limited and SECI. A solar capacity of 550 MW is being developed in the Agar Solar Park, 500 MW in the Neemuch Solar Park and another 450 MW in the Shajapur Solar Park. These solar parks will incorporate several features of the Rewa Solar Park. Like Rewa, a certain amount of power will be sold through open access to a commercial consumer, Indian Railways in this case. Three projects totalling 750 MW under the Rewa Solar Park, developed by ACME Solar, Sprng Energy and Mahindra, are currently operational while the total large-scale installations in the state stand at over 2 GW.

With a total capacity of 2,255 MW, the Bhadla Solar Park in Rajasthan spreads across 4,500 hectares. It is currently the world’s largest solar park. The solar park is being developed in four phases. In April 2019, 200 MW of grid-connected solar PV projects were commissioned at Rajasthan’s Bhadla Solar Park Phase III. SECI had tendered 250 MW of grid-connected solar PV projects to be developed at the Bhadla Solar Park Phase III. Now, only 50 MW of capacity remains to be commissioned. In March 2020, NTPC invited bids for a balance of supply package for the 735 MW Nokh solar project. According to Rajasthan’s solar policy of 2019, the state has a solar potential of 142 GW and has set a target to install 30 GW of solar capacity by 2024-25. Of this, utility-scale solar parks will account for 24 GW.

Uttar Pradesh is also planning to develop solar parks in the state. Under its solar park scheme, 600 MW of solar power will be developed across Jalaun, Etah, Mirzapur, Allahabad and Jhansi districts. The development and management of solar parks has been assigned to state agency UPNEDA and will be undertaken in a joint venture with SECI. Viability gap funding for the project will be available for Rs 2 million per MW or 30 per cent of the project amount,  whichever would be lower.

Solar power projects can be set up anywhere in the country. Scattered solar power projects lead to a higher project cost per MW and higher transmission losses, while aggregating large areas for solar park development has its own problems. It also takes a long time for project developers to acquire land, get change of land use and various permissions that delay the project. Large-scale solar parks are more difficult to operate as compared to decentralised solar systems for grid operators. This is because the power input from utility-scale generators deals with large voltage and frequency fluctuations due to the intermittency of solar power.

The outbreak of coronavirus has affected the renewable energy sector as a whole, which includes solar park development. The availability of labour has become limited. Resuming construction on projects is difficult since the Indian solar construction industry is heavily dependent on low-skilled interstate migrant labour and informal employment. In terms of project bidding, even though a few auctions have been successful, many recent tenders have also witnessed a poor response. Bidding deadlines have been extended for about 7.5 GW of solar capacity including Gujarat UrjaVikas Nigam Limited’s 700 MW solar tender for Dholera Solar Park and Rewa Ultra Mega Solar Limited’s 1.5 GW solar tender for three solar parks in the state. If the pandemic persists in the long term, solar park development activity will continue to slow down.