An early mover in India’s renewable energy sector, Amplus Solar has come a long way since 2010, the year it was founded. In its initial years of operations, the company largely focused on coal- and gas-based power plants. However, realising the vast potential of renewable energy and its role in decarbonisation, the company decided to switch to clean energy sources around 2013. Solar power, with its rapidly increasing cost-competitiveness, made more commercial sense for the company than wind power for selling power directly to customers in the distributed energy space. Thus began the company’s journey in the solar segment and Amplus Solar set up its first solar power plant of 100 kWp in 2014.

Amplus Solar specialises in end-to-end solutions for rooftop and ground-mounted solar power projects. Its solutions are not limited to on-site solar projects, the company has a large open access solar power capacity as well. Over the years, its business model has remained the same. It continues to operate on the opex model and signs power purchase agreements (PPAs) with clients to reduce financing-and technology-related risks for consumers and ensure cost-competitive tariffs. The company has established a 700 MW portfolio of projects under operation and development spread across India, the Middle East and Southeast Asia.

Much of AmplusSolar’s capacity is in open access mode. It has two large open access solar projects in Karnataka. One of them is Veera, a 175 MWp solar farm in Gadag, Karnataka, which supplies solar power to more than 30 C&I customers including Honda Motorcycles and Scooters, Cisco, Qualcomm, GE, Shell, Lafarge, ABB, Honeywell and Astra Zeneca. The second project is located in Chitradurga. In addition, the company has set up a 75 MWp solar farm, called Project Mirza, in Mirzapur district, Uttar Pradesh. This park supplies energy to marquee Indian and multinational corporates such as Adobe, HT Media, the DS Group and Ambuja Cement. Amplus Solar has invested in its second open access solar project in the state with a capacity of 100 MW in Deoria district. The project is currently under construction. It has also announced its plans for the installation of two open access projects in Haryana with a total capacity of 150 MW.

One of its on-site projects is a 3.9 MW ground-mounted installation at the HAL old airport, Bengaluru, which is a single-axis tracker-based solar plant. Amplus Solar has signed a 25-year PPA with HAL. It has also installed a 6.2 MWp rooftop solar plant at Yamaha, Noida, on an opex basis with net metering for captive consumption. The company is now diversifying into new avenues to increase its revenue. It has entered the residential solar space with capex-based projects under the brand name Homescape. The company aims to capture the residential solar market by providing quality products to customer with 25 years of warranty and eliminating substandard systems from local dealers. In addition, it has tied up with Essel World in Mumbai for setting up a 500 kWp floating solar project on the water park’s premises. It has also forayed into battery energy storage and is working with a large e-commerce player for setting up a 1 MWh unit at their site. 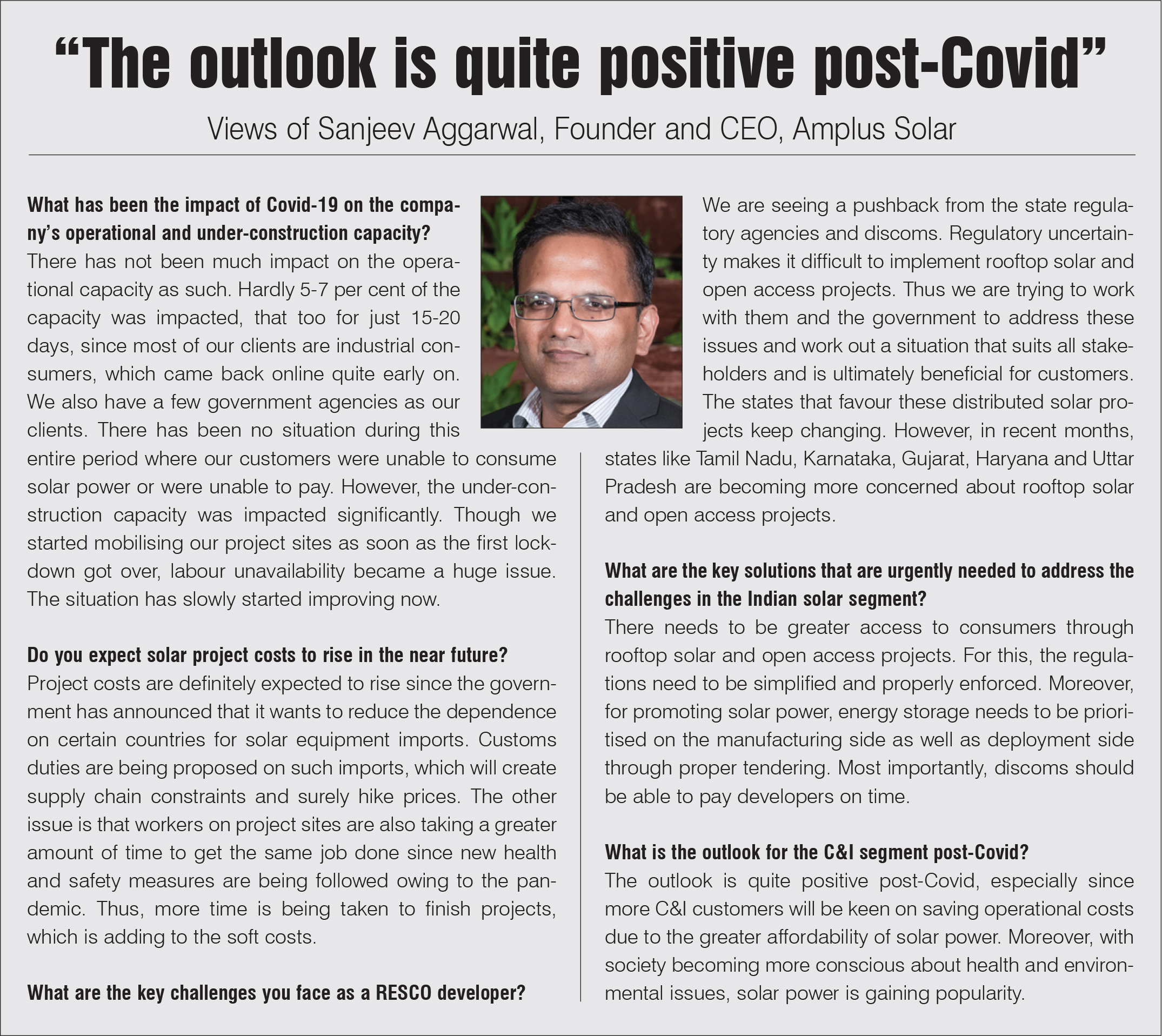 In 2015, Amplus received an equity investment of $150 million from I Squared Capital to fast-track the implementation of projects. The company has set up many of its projects through the debt financing model. In fact, one of the SBI’s first borrowers under its rooftop programme was Amplus Solar, which received a World Bank concessional line of credit through SBI under the Program for Results Grid-connected Rooftop Solar. Reportedly, the World Bank-SBI financing has enabled the company to borrow at an interest of 8.25 per cent, down from the earlier 12 per cent. In February 2018, Amplus Solar tied up with Yes Bank for co-financing solar energy projects in the country and announced plans to develop up to 1,000 MW of solar capacity by 2023. In April 2019, Petroliam NasionalBerhad (Petronas) completed the acquisition of Amplus Solar for an undisclosed amount with the intent to grow in the renewable energy space and move beyond the oil and gas sector.

Though mostly focusing on organic growth for portfolio expansion, Amplus Solar has engaged in merger and acquisition (M&A) activity in the past. While M&A activity has been minimal in the distributed solar segment, one significant deal in this space was the acquisition of SunEdison India’s C&I rooftop projects in 2016. The purchase helped Amplus Solar expand its client portfolio to include firms such as Intel, Amway, Standard Chartered Bank, Whirlpool and Delhi Metro.

With the entry of large multi-GW players in the distributed solar space, Amplus Solar now faces a lot of competition to stay on the top. Though high credit rating is an important criterion for selecting clients, there is also the risk of the bankable C&I customer base getting exhausted. To safeguard itself from this risk, Amplus Solar has already started expanding its client base by entering into the residential solar space, which it believes has immense potential in the near future. It has also started taking up floating solar and battery energy storage projects for further expanding its asset base. Amplus Solar has the benefit of years of experience, a large client base and a strong financial backing.