In light of the increasing penetration of renewable energy, energy storage has emerged as a key element for stabilising the grid. As the share of variable renewables grows, electricity systems need to become increasingly flexible in order to respond effectively to demand and supply changes. Energy storage addresses the intermittency of renewable energy and ensures a smooth power generation output, thereby facilitating grid integration. The deployment of energy storage can further help manage effective demand-side management. It can also help in reducing penalties, meeting ramping requirements, defer distribution transformer upgrades and curb curtailments. Given its ambitious renewable energy targets, India will have to significantly scale up energy storage to effectively use the renewable capacity.

Despite most Indian tenders for large-scale energy storage being technology-agnostic, battery storage is the most dominant choice. The popularity of battery storage over other forms of energy storage is also true for other countries across the world. According to the International Energy Agency’s (IEA) World Energy Outlook 2019, global growth in batteries is set to exceed other storage options available to electricity systems over the next two decades. Battery storage, coupled with solar PV, also appears to be one of the most cost-effective ways of helping provide affordable electricity to isolated communities.

New technologies are constantly being developed to make energy storage cheaper and more efficient. The most popular battery technology at present is the lithium-ion (Li-ion) battery. The cathode of Li-ion batteries is made up of metal ions including cobalt, nickel and aluminium. Cobalt is the most expensive of these elements and can account for around half of the materials cost. The University of Texas has been working on a study to develop cobalt-free batteries, which will use nickel for extra energy storage. The team achieved this by changing the composition of a cathode to 89 per cent nickel while manganese and aluminium formed the remaining. The higher nickel content enables the battery to store more energy.

While some scientists are trying to improve the lithium-based battery chemistry others are looking for alternative battery solutions.

Cheaper alternatives to lithium would reduce the cost of energy storage solutions. Concerns about the availability and cost of lithium have prompted interest in alternative battery technologies that use more abundant elements with the potential for higher energy density and enhanced safety. The prime candidates include magnesium, calcium, zinc and aluminium, all of which are known as multivalent metals. Sodium and potassium are also more abundant than lithium and theoretically could be used in batteries for energy storage. However, they lack the suitable materials for battery electrodes. Battery chemistries beyond lithium-ion are promising candidates for high-energy density, low cost and large-scale energy storage applications. However, the main challenge lies in the development of suitable electrode materials. 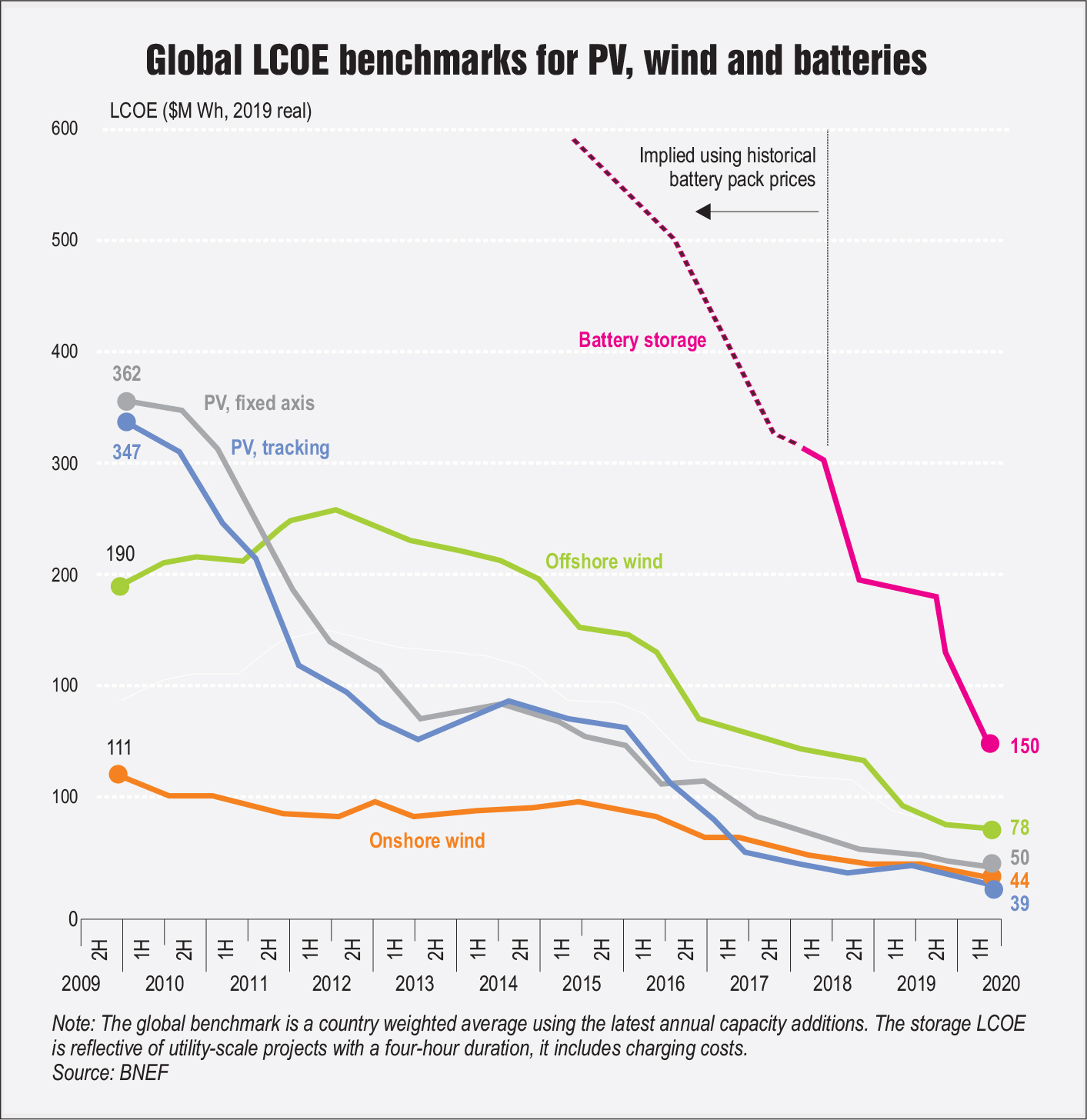 Thermal power plants are not designed to handle rapid ramping and load switching without a significant penalty on heat rate and emissions. Gas-based power plants can cater to these requirements, but India does not have cheap domestic gas and the existing plants operate as peaker plants. Pumped hydro is also an option, but its high capital cost and environmental viability are a concern. This leaves the option of energy storage technologies such as electromechanical batteries and thermal storage. These batteries are becoming more commercially viable with the levellised cost of electricity (LCoE) coming at par with conventional power plants as witnessed in recent tenders.

Owing to technological advancements, battery costs have fallen by over 80 per cent since 2010. The  capital cost of Li-ion batteries has fallen rapidly in recent years, making it difficult for other technologies to compete. Manufacturing scale-up, standardisation and technology improvements on the upstream side have contributed to this rapid decline in cost. On the downstream end, project sizes are getting bigger, which has increased the demand for storage. Li-ion batteries also benefit from the rise of electrified mobility. The economies of scale from the mass manufacturing of battery cells, primarily to serve the demand for electric vehicles (EVs) and stationary storage, has helped achieve considerable cost reductions. As battery cells make up 40-50 per cent of the cost of an energy storage system, declining cell costs have a large impact on overall system costs.

According to BloombergNEF, the LCoE of battery storage systems has halved in just two years to a benchmark cost of $150 per MWh for four-hour duration projects. In fact, battery energy storage has become competitive with gas peaker plants. Both natural gas peaking units and batteries may meet peak demand, but the batteries will save customers money by shifting low-cost solar power produced during the day to meet high-priced peak demand in the evening. However, the challenge remains for longer-duration energy storage as the cost of batteries, typically Li-ion, increases rapidly with the discharge duration. For power supply over four hours, gas plants will be cheaper than batteries.

The increasing deployment of renewables, growing penetration of EVs, and changes in electricity demand patterns will call for more flexibility in power supply. These trends will drive a significant increase in the use of battery storage. According to the IEA, if the costs of battery storage systems were to fall below one-third of the current level, investment decisions in new power capacity would change considerably, especially in India. Coupling solar power with affordable batteries is an effective means of providing electricity and flexibility.

Moving forward, regulatory and system changes, along with market evolution, are expected to bring in more storage into the system. In the short to medium term, the energy storage market will be impacted by the coronavirus pandemic. The slowdown in renewable energy projects and automobile purchases including EVs may impact battery demand in 2020. In the short run, large-scale projects may get delayed due to supply chain disruptions. Many commercial and industrial customers will have to cut back investments outside their core business. Thus, the purchasing of an energy storage system might be considered non-essential for the time being. Although this might slow down the demand for scaling up energy storage for a while, the technological developments will continue to drive improvements in storage.