The Republic of Ireland’s power sector is undergoing a sea change as the country accelerates the transition from an energy system heavily reliant on fossil fuels to one powered by renewables. To this end, in June 2019, the Irish state adopted the Climate Action Plan 2019, which targets achieving 70 per cent of electricity generation from renewable energy sources by 2030. Key actions highlighted under the plan for each relevant sector (including electricity, enterprise, housing, heating, transport, agriculture, and waste management) include streamlining the approval system, connection arrangements and funding support for new technologies for wind projects (both onshore and offshore); and accelerating the penetration of electric vehicles (EVs), especially cars and vans, so that, by 2030, EVs make up 100 per cent of all new vehicle sales, and almost 950,000 EVs are on the road.

Achieving such ambitious targets entails overcoming major challenges and would require Ireland to develop significant infrastructure as well as the capacity to integrate new technologies. Thus, the action plan makes onshore and offshore wind projects central to increasing the share of renewables from 30 per cent to 70 per cent and adding 12 GW of renewable energy capacity by 2030. Meanwhile, Ireland’s power sector is expecting Brexit (Britain’s exit from the European Union [EU]) to impact its security of supply. At present, the country is connected to the rest of the EU via the UK only and in a post-Brexit scenario it would be left with no single direct electricity interconnection with the rest of the EU.

Despite the government’s attempts to increase competition, the Irish power market’s ownership structure continues to be concentrated in the hands of the incumbent government-owned Electricity Supply Board (ESB). Although there are several independent power producers (IPPs), the infrastructure in the distribution segment is exclusively owned and operated by ESB Networks, a unit of the ESB Group. However, the supply market is highly competitive with several power suppliers in the market, which are free to determine retail tariffs, while consumers are free to choose from among suppliers.

The transmission infrastructure is also owned by ESB Networks, while the network is operated, developed and maintained by state-owned independent transmission system operator (TSO) EirGrid. The electricity markets of the Republic of Ireland and Northern Ireland were integrated in 2007 to form a single wholesale market called the single electricity market (SEM). EirGrid is part of the EirGrid Group, which, through the Single Electricity Market Operator, is responsible for the operation of the SEM. EirGrid also owns System Operator Northern Ireland, the TSO for Northern Ireland.

The Commission for Regulation of Utilities is the independent electricity and gas regulator. The Department of Communications, Energy and Natural Resources determines the country’s overall energy policy. A significant change in the Republic of Ireland and Northern Ireland’s electricity sector took place with the completion of the new Integrated Single Electricity Market in September 2018. With this new market arrangement, the island’s wholesale electricity market was aligned with other European electricity markets, making optimal use of cross-border transmission assets. However, this integrated market is also in jeopardy due to uncertainty associated with Brexit. 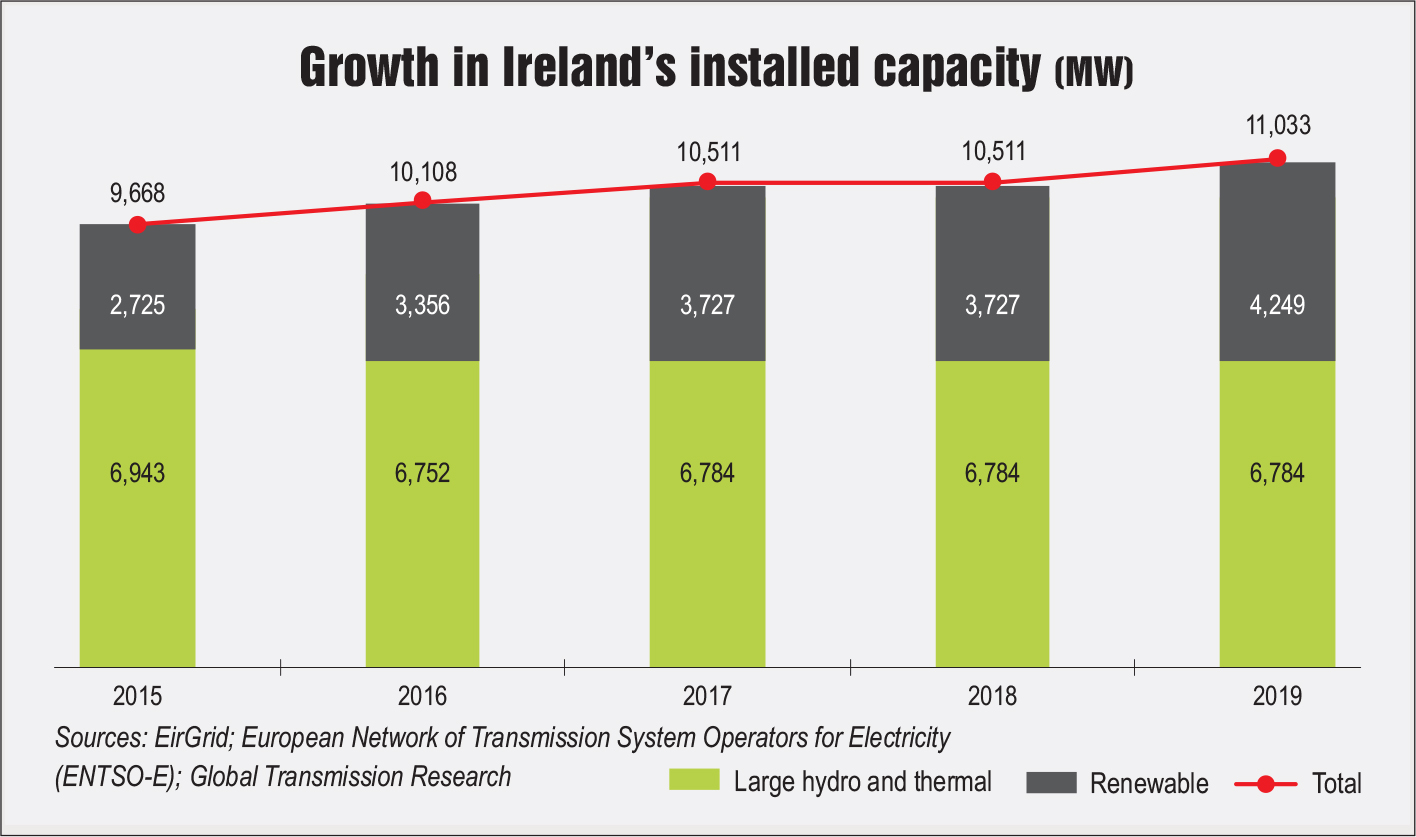 As of 2019, Ireland had an estimated installed power generation capacity of 11,033 MW, of which 61 per cent was based on fossil fuels (gas, oil, coal and peat), while the remaining was based on renewable energy sources. According to a report by the Irish Wind Energy Association, the share of wind power in Ireland is the second highest in Europe and the highest for onshore wind farms. Thus, the country has significant potential for more growth in both the onshore and offshore segments.

As per Global Transmission Research estimates, by the end of 2019, the Irish transmission network comprised 7,006 ckt. km of line length as compared to 6,939 ckt. km of line length in 2018, representing an annual growth rate of 1 per cent. Around 64 per cent of the line length is at the 110 kV level, followed by 28 per cent at 220 kV and the remaining 8 per cent at the 275 kV and 400 kV voltage levels. At present, the Republic of Ireland has transmission interconnections with Northern Ireland and Wales, UK.

For more than a decade, despite having some of Europe’s best wind resources, Ireland has been developing its large offshore wind energy resources at a snail’s pace, largely due to the lack of robust policy support. To put it in perspective, as of 2019, Ireland had only one operational offshore wind project – the 25.2 MW Arklow Bank Wind Park Phase I – which was developed as a demonstration project in 2004.

The Climate Action Plan highlights several initiatives focused on streamlining regulations, particularly with respect to planning. To further assist deployment, the Irish government is planning to implement the new Renewable Electricity Support Scheme (RESS). This scheme would include a series of auction rounds over the next decade supporting the required level of additional renewable energy capacity; help develop an offshore electricity grid; introduce the new Marine Planning and Development Management (MPDM) Bill (approved by the government in December 2019); as well as implement a new offshore grid connection policy that is in line with the RESS auction timelines.

In the past two decades, the growth in wind power has made it increasingly important to link the Irish electricity system to the UK and the wider EU systems. With Ireland aiming to meet its target of 70 per cent electricity from renewable energy sources by 2030, ensuring the sustainable operation of power systems would require a major increase in cross-border interconnections with neighbouring grids.

In line with this, several ongoing and future grid expansion and modernisation projects have been planned for developing interconnections with neighbouring countries. This would enhance the security of supply of the transmission system, accelerate the integration of variable renewable energy generation, and facilitate greater competition.

Some of the major planned cross-border projects include the Celtic interconnector with France; the Greenlink interconnector project between the UK and Ireland; North South 400 kV interconnection development; the Renewable Integration Development Project (RIDP); and the Mayo Atlantic Renewable Energy Export (MAREX) project between Ireland and the UK. These projects have also been designated as projects of common interest by the European Commission (EC).

To lessen the impact of a likely post-Brexit situation, Ireland is working on a direct electricity link with mainland Europe through the Celtic interconnector project with France. The project will increase electricity trade within Europe by directly linking the single electricity market in Ireland with the electricity market of mainland Europe. It entails the construction of a high voltage direct current (HVDC) undersea cable and aims to connect the north coast of Brittany (France) to the south coast of Ireland. The potential route will be approximately 575 km long, of which the offshore element will be approximately 500 km. In October 2019, the EC approved Euro 530 million in funding for the interconnector project.

The UK and Ireland are continuing to move towards the proposed 500 MW Greenlink interconnector project, regardless of Brexit. The project entails the construction of a 70 km long (submarine cable length) HVDC interconnection, connecting Ireland’s Great Island substation in Wexford to the UK’s Pembroke substation in South Wales. It is being developed by Greenlink Interconnector Limited, which is jointly owned by Ireland’s Element Power Holdings – part of Hudson Sustainable Investment – and the Switzerland-based Partners Group. The link has secured a 500 MW connection agreement with TSOs of the UK and Ireland (National Grid and EirGrid respectively).

The MAREX project is a storage and transmission project to deliver renewable energy from Ireland to the UK. It entails the construction of a 750 MW HVDC voltage sourced convertor transmission link from the 400 kV Bodelwyddan substation (near Liverpool) in the UK to Maynooth near Dublin, Ireland. The cross-Ireland section of the interconnector, running westwards from Maynooth to Mayo, is also being developed and is contingent on the advancement of the Bodelwyddan to Maynooth interconnector. Of this capacity, 500 MW will be used to export renewable power and 250 MW will be used for market-to-market import/export of electricity between the UK and Ireland, effectively more than doubling the level of interconnection between the two countries. The MAREX project aims to integrate 2,000 MW of new renewable energy capacity  and 6 GWh of pumped hydro energy storage system (PHES) in Mayo (Ireland) with the systems of both Ireland and the UK, as well as provide system voltage stability to both grids. The energising goal for the infrastructure is 2025.

Some of the other important projects include the North-South Interconnector, which involves the construction of a new 1,500 MVA, 138 km, 400 kV single-circuit overhead line (OHL) from the 400/275 kV Turleenan substation in Northern Ireland to the 400/220 kV Woodland substation in Ireland, and the RIDP, which is required to connect renewable energy generation in the north and west of the island, further integrate the Ireland and Northern Ireland transmission systems, and provide capacity for substantial demand growth.

At present, EirGrid can accommodate up to 65 per cent of variable wind and solar energy generation in the electricity grid securely at any given time, but it wants this capacity to reach 95 per cent by 2030.

In line with Ireland’s increasing focus on carbon emission reductions, in October 2019, the EirGrid Group launched its new five-year strategy (2020-25) revolving around transforming Ireland’s electricity system for future generations. This strategy coincides with the Irish government’s Climate Action Plan 2019. Under this strategy, the group acknowledges the potential connection of up to 10 GW of additional renewable power generation to the electricity system by 2030, compared to 5 GW at present. To address the climate change crisis, the Irish power operator is set to invest more than GBP 2 billion over the next five years on upgrades in Ireland.

Ireland has begun its journey to carve out a noteworthy place for itself in addressing global climate change with its recent policies and plans focused on meeting ambitious carbon emission reduction and renewable energy generation targets. The country’s position is well reflected in the impressive target of generating 70 per cent of electricity from renewable energy sources by 2030, under the Climate Action Plan.

The rich offshore wind industry is finally set to play a pivotal role in meeting the country’s renewable energy targets. But success in meeting such ambitious targets depends on the timely execution of projects, a significant reduction in carbon emissions in other crucial sectors, as well as addressing the island’s energy security concerns, which might arise from a post-Brexit deal on the Irish power sector.