Sectors and entities that were already grappling with losses and financial sickness have now been left all but dead as the Covid-19 pandemic continues to soar unchecked. Power distribution business has emerged as one of the many segments severely affected by Covid-19. The steep fall in demand for power owing to the complete nationwide lockdown for nearly two months has impacted generation. The reverse domino effect of the pandemic has extended to renewable energy generators as well. Several problems have emerged with the payment ability of discoms getting stunted. Initially, the must-run status of renewable energy generators was challenged by an overall decrease in demand and discoms’ preference for using only the cheapest form of power generation. This led to idle renewable energy capacity. The fallacies of single-part tariff given to renewable energy generators were highlighted when they received zero compensation, threatening their survival.

When the Ministry of Finance announced the Rs 20 trillion package, India Inc breathed a collective sigh of relief. The power distribution segment was even more elated as it received a share of Rs 900 billion of the total stimulus. The liquidity infusion is directed specifically at easing the burden of outstanding debt of discoms and preventing them from going bankrupt. The critical question now is how this would impact the future of the power sector and renewable energy generators.

Impact of Covid-19 on discoms

The Covid-19 crisis has impacted the total power demand during 2019-20 and grew by only 1.28 per cent to reach 1,291 BUs during 2019-20. This is far less than the growth rates (of over 5 per cent and 6 per cent) observed in the previous fiscal years. In fact, there was a steady decline in the growth of power consumption even before the outbreak. This can be attributed to the slide in demand during August-December 2019 due to the slowdown in industrial activity. Electricity demand declined to its lowest in over a decade in October 2019 when it dipped by over 13 per cent as compared to October 2018. The pandemic has rendered the country’s commercial and industrial (C&I) segment inactive. As a result, the overall power demand declined by over 30 per cent in the week of March 23-28, the first week of the lockdown, as compared to the previous week of March 16-22, 2020. The C&I segment is one of the largest contributors to discom revenues and, therefore, discoms stand to lose much due to the lack of demand from this segment. The already cash-strapped discoms are now on the verge of becoming insolvent owing to the loss of revenue from their highest-paying consumer segment. Further, the billing and collection efficiency of discoms has been hit. The lockdown has been extended till June, with partial opening of businesses. This is expected to boost demand. However, as compared to the previous year, the demand is likely to remain subdued. According to Renewable Watch Research analysis, due to Covid-19, discoms stand to lose about Rs 240 billion in the best-case scenario and Rs 700 billion in the worst-case scenario during the months of March to June 2020. Given the Covid-19 mitigation trajectory, discoms could collectively be looking at a decrease in revenues to the tune of Rs 417 billion during the period March-June 2020. 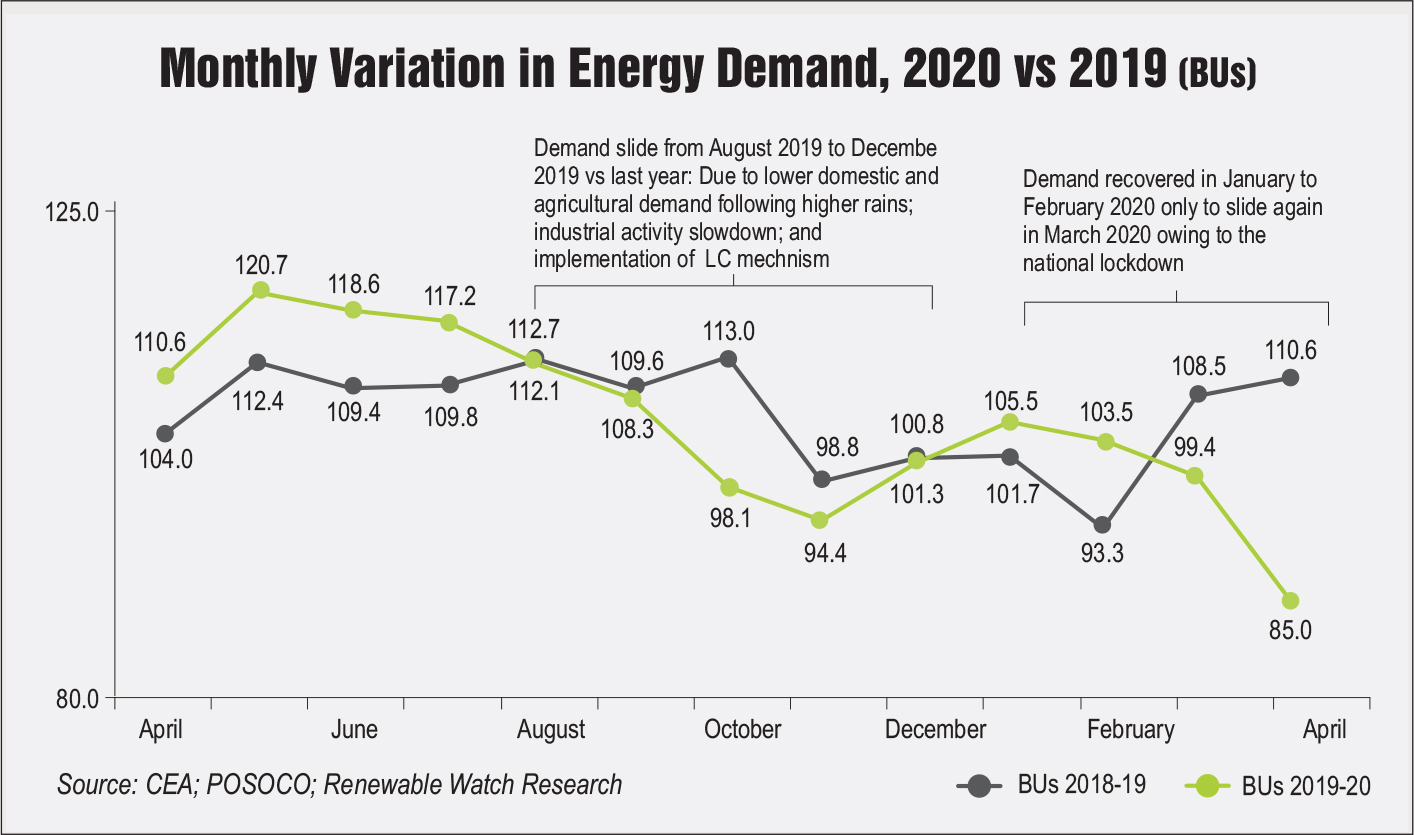 Despite must-run status being granted to renewable energy projects, reports of curtailment were reported during the lockdown. In April 2020, Punjab State Transmission Corporation Limited invoked the force majeure clause and announced that all renewable power producers will have to curtail generation till the pandemic lasts. Such orders have a devastating impact on the cash flows of renewable power generators. Conventional power producers are comparatively better off, given the two-part tariff structure that allows them to recover fixed costs even if no power is being procured by discoms. Unfortunately, no such provision exists for renewable energy power plants. Therefore, a renewable power generator is not paid for every unit of power not being procured, thereby jeopardising the very survival of the plant.

For discoms that honoured the must-run status and continued procuring power from renewable energy generators despite low demand, it became difficult to clear outstanding dues owing to the lack of incoming cash. The loss of jobs and livelihoods has rendered consumers unable to pay bills. Meanwhile, discoms have been unable to deploy billing and collection agents due to the risk of infection. The C&I segment has not been procuring power, reducing discom receivables and deteriorating their liquidity quotient significantly, thereby impairing their ability to pay power generators. In a major relief measure, the power ministry directed the Central Electricity Regulatory Commission to provide a moratorium of three months to discoms for making payments to generating companies and transmission licensees and not to levy penal rates of late payment surcharge. However, this does not bode well for renewable energy generation companies, especially when there have been delays of several months in receiving payments from discoms. 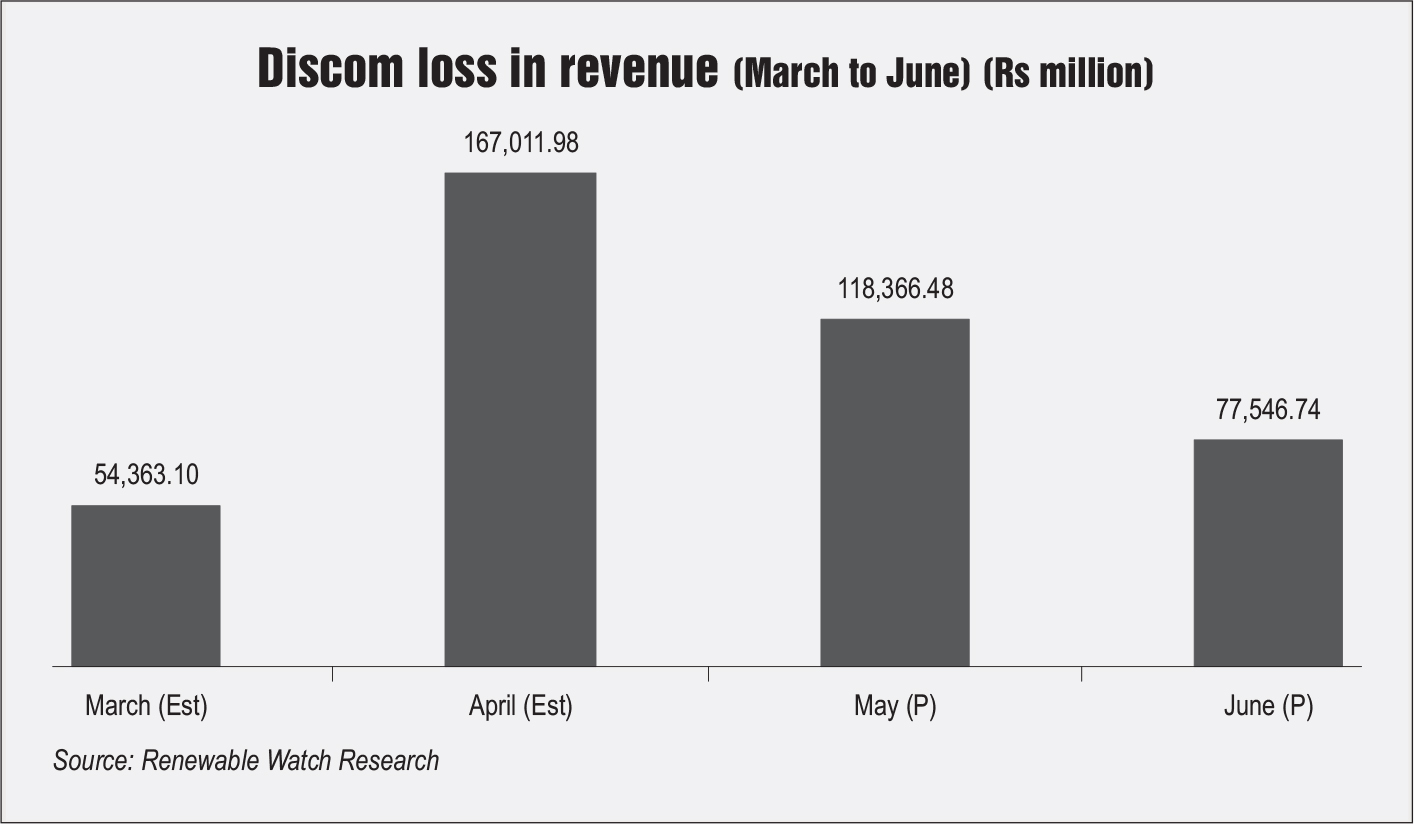 In May 2020, the finance minister announced a number of measures to encourage investment in the power sector and make it more sustainable under the Atmanirbhar Bharat Abhiyaan. One of these was cash infusion into the ailing discom segment. Under the Rs 900 billion liquidity injection package, the Power Finance Corporation and the Rural Electrification Corporation will provide loans to discoms against state government guarantees for clearing liabilities to power generating companies. This is crucial given that outstanding dues to generators and transmission companies stand at around Rs 920 billion. With the cash infusion specifically directed at payment of dues by discoms, renewable energy generators can hope to receive their outstanding payments and expect to be compensated in real time for the power procured by discoms during the lockdown. This would improve their cash flows and lead to a virtuous circle of revenues and investments.

Pinaki Battacharya, CEO, Amp Energy India, says, “With this boost, discoms will let the industry source some of its power from private renewable energy generators through open access to enable the industry to reduce their cost in these testing times. Although this move would address the situation in the short term, a long-term approach will make the sector sustainable.”

Sabyasachi Majumdar, group head and senior vice-president, corporate ratings, ICRA, opines, “This is especially positive for renewable energy IPPs in the states of Andhra Pradesh, Rajasthan, Telangana and Tamil Nadu, which are reeling under pending dues of 8-12 months from these state discoms. This would enable the IPPs to lower their working capital interest burden in the near term and improve their liquidity and debt coverage position.”

Sanjeev Aggarwal, founder and CEO, Amplus Solar, provides a cautionary note. “We need to be conscious of the fact that this again is going to be a temporary solution to the ailing power sector where long-term reforms, such as content and carriage separation, are required. We need to give consumers the right to select their electricity supplier. This immediate liquidity injection would probably save many generation companies from ending up in a severely stressed situation.”

The Rs 900 billion bailout package is being hailed as a welcome step, especially for renewable energy generators that have struggled with cash flows due to delayed payments and, to some extent, curtailment. It must, however, be borne in mind that the problem runs deep and a temporary bailout measure can at best be used as a band-aid. To resolve the issue, significant policy reforms would be required to ensure that renewable energy generators are duly paid in time for every unit of power procured by discoms across the country. The pandemic has exposed severe fault lines within the system and offers an opportunity to fix the issues permanently. For the time being, renewable energy generators can breathe easy as their outstanding dues might just be on the way.