Rapid solar installations across the globe at declining prices raise the key question of project quality. This includes not just the solar photovoltaic (PV) system, but all its components including inverters, mounting structures, cables, connectors, and, most importantly, modules. Moreover, the design and construction of the project is equally important to ensure that it generates expected returns. However, in practice, not all quality measures are followed as many times substandard products and construction practices are used to cut corners and save costs. Thus, often components like module backsheets are ignored, as they contribute only 4-5 per cent of the total cost of a solar panel. However, since it is the outermost layer of the PV module, its criticality is quite high for ensuring solar panels’ longevity and ability to survive for 25 years.

Against this backdrop, DuPont recently released its 2020 Global Photovoltaic Reliability Report. This report features results from the company’s field inspection and analysis programme of 551 solar installations around the globe with a total capacity of nearly 3 GW spanning 9 million solar panels. Its focus is on monitoring of material degradation and its impact on module performance based on an analysis of a number of variables including components, material, mounting, time in service and climate. Renewable Watch highlights the key findings of the report… 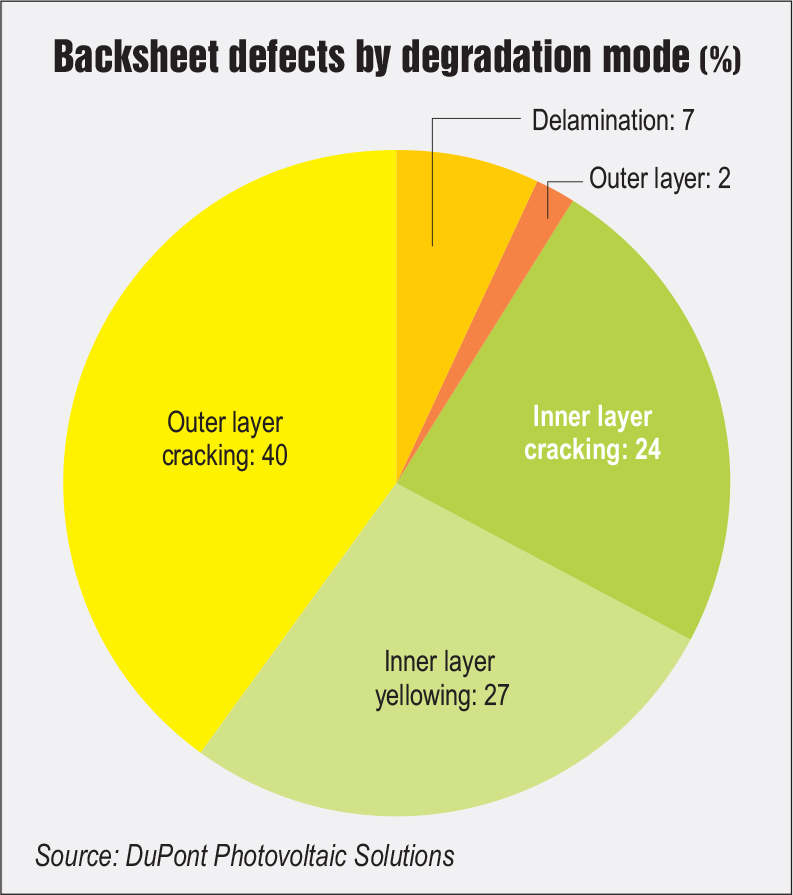 The commonly observed module defects include those in backsheet, cell interconnection and encapsulants. In backsheets, the outer layer (air side) and inner layer (cell side) can get cracked or delaminated, or yellowing can occur. Cell interconnections are prone to corrosion, hot spot, snail trails, cracks and burn marks, while discoloration, browning and delamination are common defects in encapsulants. Apart from these, there are common occurrences of glass defects, loss of anti-reflective coating and faults in junction boxes. Of the total 3 GW solar capacity inspected, 30 per cent had module defects. Similarly, around 16 per cent of the capacity had backsheet defects, while 14 per cent had cell interconnection defects. Moreover, it was found that cracking comprises 64 per cent of all backsheet defects.

A comparison of the projects located in China, Europe, India and North America shows that there is no clear correlation between cracking defects and climate at the site. In fact, cracking has not only been observed in hot arid climatic regions but also in cold arid, temperate  and Mediterranean regions. Moreover, nearly a fourfold cumulative increase was observed in the cracking defect rates of the polyvinylidene fluoride outer layer, which increased from 5 per cent to 23 per cent between the fourth and ninth year after installation in all these regions. It was observed that the deeper cracks in the backsheet have led to delamination. This exposes the core layer to the environment and may lead to inverter tripping and ground faults. Similarly, inner layer cracking was observed in fluoroethylene vinyl ether and polyethylene terephthalate backsheets. This can cause delayed inverter starts, ground faults and fires, thereby directly impacting power production from the solar plant. Delamination in double glass modules is also an emerging trend in backsheet failures.

In a solar plant in France, it was observed that the performance of modules kept declining year on year after eight years. It was found that many modules displayed widespread backsheet cracking, which led to a degradation of insulation resistance in solar modules over time. Similarly, a solar project in Arizona, utilised a mixed bill of materials. Widespread cracking was observed after seven years, which eventually led to the replacement of modules in order to maintain optimum generation. Thus, both developers and installers should treat the backsheet as an important component despite its low contribution to the overall project costs, as a low quality backsheet can cause enormous losses in the project lifetime, from module replacement to safety hazards. Moreover, no compromises should be made on project quality to save small initial costs as it will surely have dire consequences later on.