In March 2019, the Ministry of Civil Aviation introduced the National Green Civil Aviation Policy, 2019 to create an ecosystem for the sustainable development of the aviation sector in India. The aviation industry is one of the largest contributors to the country’s carbon footprint and the policy is aimed at mitigating its negative impacts on the environment. The key objectives are to enable, promote and strengthen all-inclusive, green and sustainable growth of air transportation in India by minimising the adverse environmental impacts of civil aviation activities.

Much before the policy was introduced, airports in India had shown an inclination towards sustainable initiatives by using solar and other forms of renewable energy to meet their power requirements. So far, over 80 MW of solar power capacity has been installed at various airports around the country. Airports are at an advantage with regard to solar power deployment as they have large swathes of land in relatively shadow-free zones in addition to significant rooftop real estate. Therefore, both ground-mounted large-scale solar power plants as well as rooftop solar plants can be installed at terminals and parking spaces. Solar power not only allows airport operations to run independently of grid-based power, but also offsets the carbon emissions from airports and airplanes.

The installed solar power capacity at various airports stands at 85.9 MW. The development of solar power plants at airports has taken off in the past five years. It started in 2015, when Cochin International Airport Limited (CIAL) became the first solar-powered airport in the world, with the commissioning of a 12 MW solar power plant on its premises. Its installed capacity has now expanded to 40 MW with another 12 MW in the development stage. 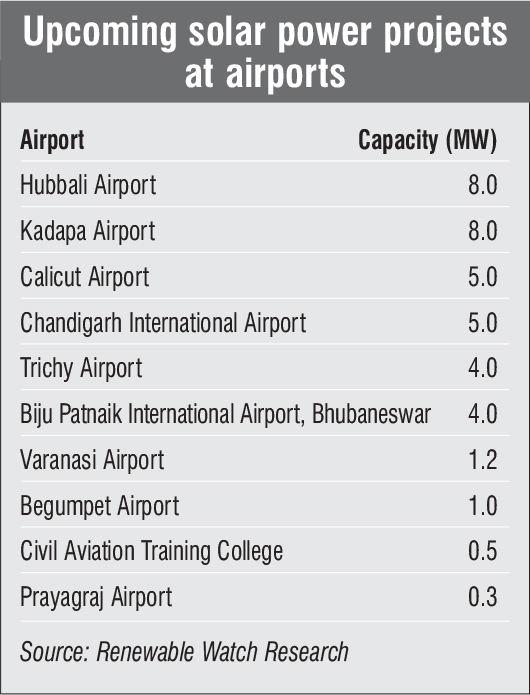 In January 2020, Vikram Solar commissioned solar projects at three airports for the Airports Authority of India (AAI). The projects have been installed at Dibrugarh in Assam, Gaya in Bihar, and Gondia in Maharashtra. Together, these three projects have a cumulative capacity of 1,165 kW. The solar project at Dibrugarh airport has 725 kW of capacity and is expected to generate over 10 million kWh annually, while the ones at Gondia and Gaya, with 220 kW of capacity each, will generate 300,000 kWh each.

The AAI has been a key initiator of setting up solar power plants across India’s airports. According to AAI, the average solar power generation cost is Rs 2 per kWh against the average commercial power tariff of Rs 9 per kWh for grid-based power. Further, AAI utilises its bank of unused land at operational and non-operational airports for solar power development. There are several cases where significant cost savings have been generated by using solar power at airports. The 15 MW solar plant at Kolkata airport saves a minimum of Rs 167 million annually. 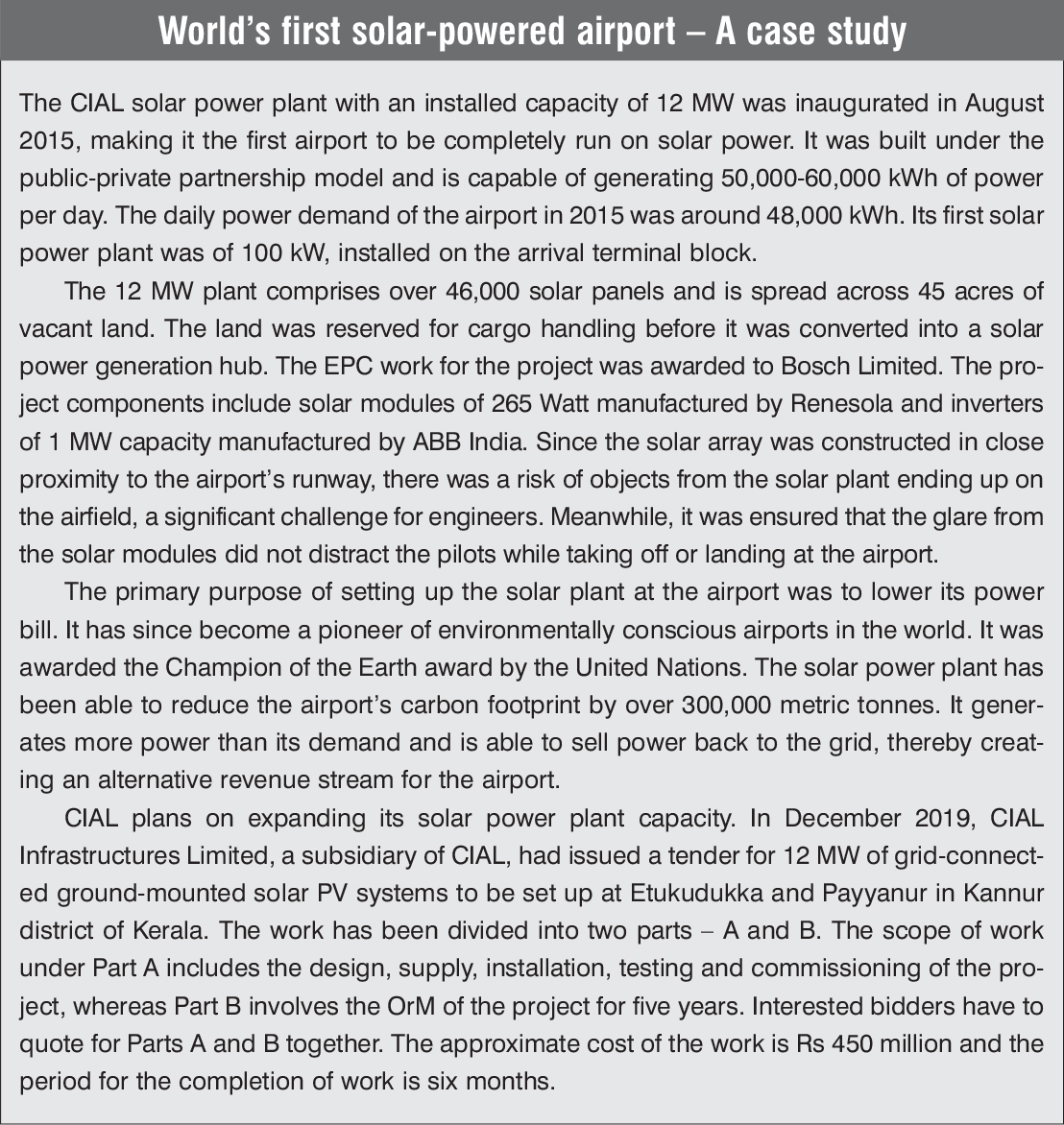 In November 2019, a tender was issued by CIAL Infrastructures for setting up 12 MW of ground-mounted solar power capacity at the Cochin International Airport. In the same month, AAI issued a tender for the procurement of solar power by the Amritsar airport through open access. As per the tender, the Amritsar airport is looking to procure 1.577 MUs of solar power every year for a contract period of 10 years. The AAI has also issued three tenders for the procurement of 3.7 MW of solar power through open access. The capacities tendered are 1.5 MW for the Raipur airport, 1 MW for Coimbatore airport, and 1.20 MW for the Aurangabad airport. According to the tender document, bidders need to supply 1.577 MUs of contracted energy for 10 years and a minimum 6 per cent of the annual contracted energy in any month of the year during the contract period.

In September 2019, the AAI issued a tender for 100 kW of grid-connected rooftop solar projects to be installed under the capital expenditure model at the Pune airport’s terminal building. The tender also includes operations and maintenance (O&M) of the project for five years. The estimated cost of the project is Rs 12.34 million. Another 85 MW of solar power capacity is in the works at various airports.