Subsidies are an integral part of the government’s energy programmes aimed at creating a market base until the service or product attains enough momentum to sustain itself on market forces. These subsidies have played a key role in the evolution of India’s renewable energy market, bringing it into the mainstream power generation basket. Subsidies have been provided in many forms and areas, from accelerated depreciation (AD) to viability gap funding (VGF), and as a support for central- and state-level schemes. The primary purpose of renewable energy subsidies in the country has been twofold, both on the supply and demand sides. On the supply side, it supports the development and deployment of technology by reducing the cost burden on developers. On the demand side, subsidies help bring down the overall power price from the technology to encourage its offtake by discoms.

“Mapping India’s Energy Subsidies 2020” by the International Institute for Sustainable Development, in collaboration with the Global Subsidies Initiative and the Council on Energy, Environment and Water, examines the role of subsidies in the evolution of different types of energy, including renewable energy, in India.

The past five years have seen subsidies growing three times over, from Rs 32 billion in 2013-14 to Rs 99 billion in 2018-19. Cumulatively, Rs 558 billion has already been disbursed or earmarked for various subsidy programmes from 2013-14 to 2018-19. The target of achieving 175 GW of installed capacity has been a primary driver for the uptake of subsidies in the Indian renewable energy sector. In 2018-19, there were a host of subsidies for various renewable energy schemes and technologies. These include AD for wind and solar power projects of Rs 27.7 billion and support for solar parks and large solar power deployment of Rs 14 billion. Meanwhile, rooftop solar and other such applications were supported with a subsidy fund of Rs 16.7 billion. The VGF component of the Jawaharlal Nehru National Solar Mission (JNNSM) Phase II had a subsidy corpus of Rs 13.8 billion.

According to the “Mapping India’s Energy Subsidies 2020” report, subsidies in the renewable energy sector in India peaked in 2017. The year was marked with significant policy changes such as the slashing of AD from 80 per cent to 40 per cent and roll-back of generation-based incentives. Removal of these from the programmes had a direct impact on the outlay of subsidies.

In 2016-17, subsidies reached a high of Rs 15.3 billion but have since fallen by around 35 per cent. A slew of reasons have contributed to this decline. There was a lack of reporting of the released amounts under VGF and the grid-connected solar rooftop programme. Meanwhile, the imposition of safeguard duties in 2018-19 translated into the removal of customs duty waiver worth Rs 11.5 billion in 2017-18. These led to a domino effect on the fall in capacity deployed during the year, following which the subsidies granted saw a decline. 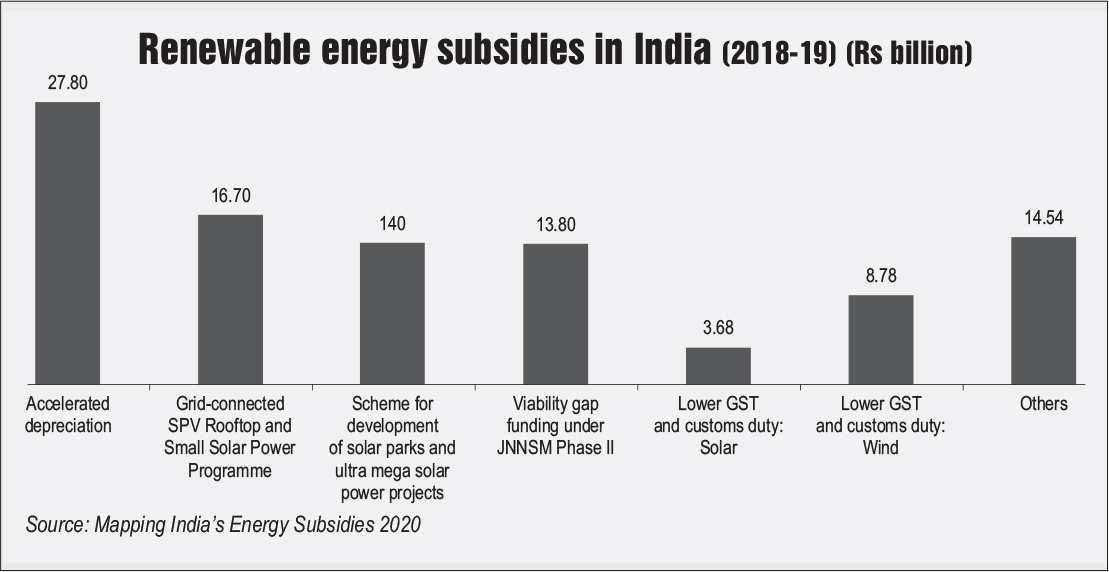 The fall in subsidies coincided with the decline in the installed capacity in the solar and wind power segments. In 2017-18, the wind power segment was disrupted with a move from the feed-in tariff (FiT) regime to reverse auctions. There was a sudden decline in installation activity as the market tried to grapple with the change. While the FiT hovered around Rs 5 per kWh, the  first few auctions revealed tariffs of around Rs 3.50 per kWh and later hit a low of Rs 2.44 per kWh. Since then, tariffs seem to have stabilised at about Rs 2.80 per kWh, still nearly half of what was being provided as FiT to developers. While the period of transition was initially expected to last a few months, the uncertainties left in its wake continue to hinder growth even after over two years.

Meanwhile, the solar power segment has seen its own share of struggles. Bid extensions, postponements and lack of investor and developer interest have created a vacuum in the auction process for solar power capacity. The poor response is primarily due to tariff caps, imposition of module duties and several state-centre policy-level issues that have ultimately hindered the segment’s growth. Unavailability of adequate transmission capacity has also contributed to lower on-grid capacity installation in the renewable energy sector. During 2016-17 and 2017-18, an average of 13 GW of renewable energy capacity was installed. This, however, declined to less than 10 GW in 2018-19. Investor sentiment, as a result, has been dampened. The government seems to be in favour of bringing back previous levels of support and removal of components such as tariff caps from tenders to correct the growth trajectory.

Over the years, a number of policies and schemes have been introduced by the government to support the development of decentralised renewable energy technologies. The share of subsidies for this segment has grown from 4 per cent in 2016-17 to 8 per cent in 2018-19. The irrigation-focused KisanUrjaSurakshaevamUtthaanMahabhiyan (KUSUM) scheme and Phase II of the Grid Connected Rooftop Solar Programme together account for a support outlay of about Rs 580 billion by 2022.

The subsidy schemes focus largely on production, with about 91 per cent of all the support amount directed towards it. The remaining subsidy amount supports both production and consumption. These subsidies are provided in the form of tax breaks to renewable energy companies wherein the government forgoes the taxes that it would have earned. Tax breaks, along with concessional duties and taxes, account for about two-thirds of the renewable energy subsidies, while 38 per cent is through budgetary transfer, and income or price support accounts for only 2 per cent. 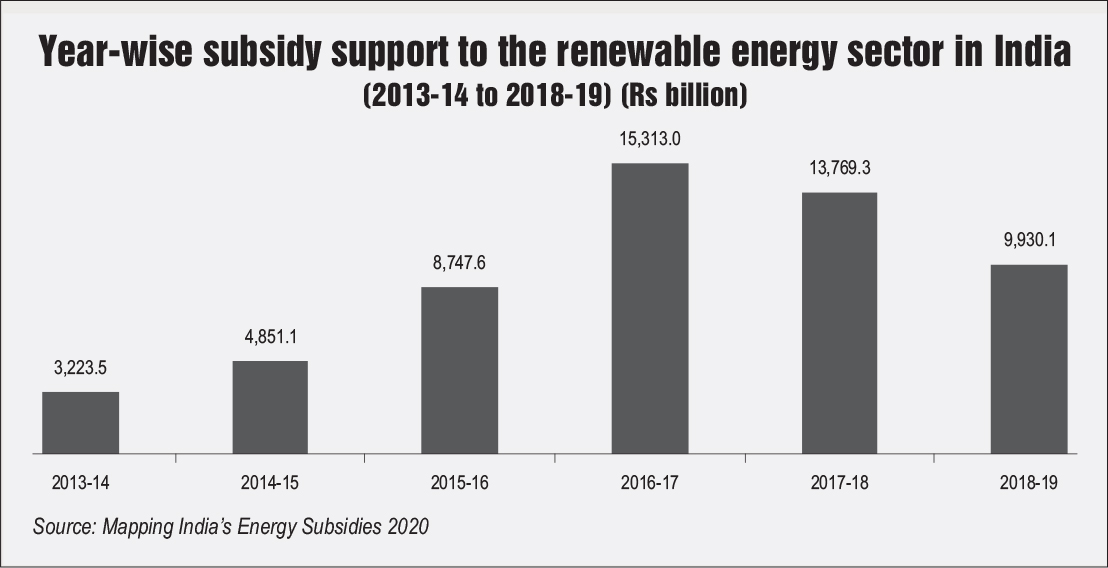 Several renewable energy technologies such as floating solar, canal-top solar and solar-wind hybrids have only recently entered the growth stage or are still in the pilot stage. These upcoming technologies may increasingly need a bigger portion of government subsidies to support their deployment and cost reduction to affordable levels. In November 2018, 50 MW of floating solar auction saw bids for tariffs as low as Rs 3.29 per kWh.

Meanwhile, expressions of interest for 1 GW of offshore wind power capacity were invited, which received an overwhelming response from wind power companies including several international players. Studies have indicated that offshore wind power generation may be around Rs 9 per kWh, which may render it unfeasible for discoms to procure. Hence, the government has planned to provide a VGF to bridge the distance between the cost of generation and the per unit price that discoms are willing to pay. Even though the 2022 target of 5 GW may not be achievable any more, the government is looking to step up efforts to achieve the target sooner rather than later.

The revival of the central public sector enterprises scheme by the government also paves the way for India’s energy transition from coal-based power to clean and green renewable energy. To this end, VGF of around Rs 85.8 billion for 12 GW of solar power capacity to be deployed between 2019-20 and 2022-23 may be provided. The only caveat is that the projects must use only domestically manufactured technology, which may render their cost of generation higher than that of projects using Chinese modules.

According to the report, subsidies continue to be an important pillar of support for India’s energy transition and renewable energy ambitions. The nature of subsidies and the technologies that get a larger share may change in the near future. Even as wind and solar power have become largely market-driven, other processes, technologies and strategies may still require government support in the form of intelligent subsidies that enhance the value of products and services.