In June 2018, the Ministry of New and Renewable Energy (MNRE) announced its offshore wind energy targets of 5 GW by 2022 and 30 GW by 2030. This announcement was made after the first-ever invite for expressions of interest (EoIs) for an offshore wind project received a positive response from developers. The EoIs were invited by the National Institute of Wind Energy (NIWE) in April 2018, almost a year after the government approved India’s National Offshore Wind Energy Policy. Studies have strongly suggested that there is a high offshore wind potential in the southern regions of the peninsula and along the western coast. However, experts suggest that the initial cost of power generation from offshore wind power plants and the resultant tariffs are expected to be much higher than those of mainstream renewable energy technologies. Renewable Watch analyses the factors responsible for the high cost of offshore wind power generation in India and its commercial ability to compete with the existing sources of renewable power generation…

According to the MNRE, India has an offshore wind energy potential of around 70 GW along the coasts of Gujarat and Tamil Nadu. This is based on extensive studies undertaken by the NIWE, including wind speed data for the past one year based on the light detection and ranging (LiDAR) system installed and commissioned off the Gujarat coast. To further determine the offshore wind power potential, the NIWE has plans to install more such systems in Gujarat and Tamil Nadu.

Offshore wind power development in India has a significant cost premium associated with it as with any technology at its nascent stage. There are several challenges that make offshore wind costlier than other existing power generation technologies. 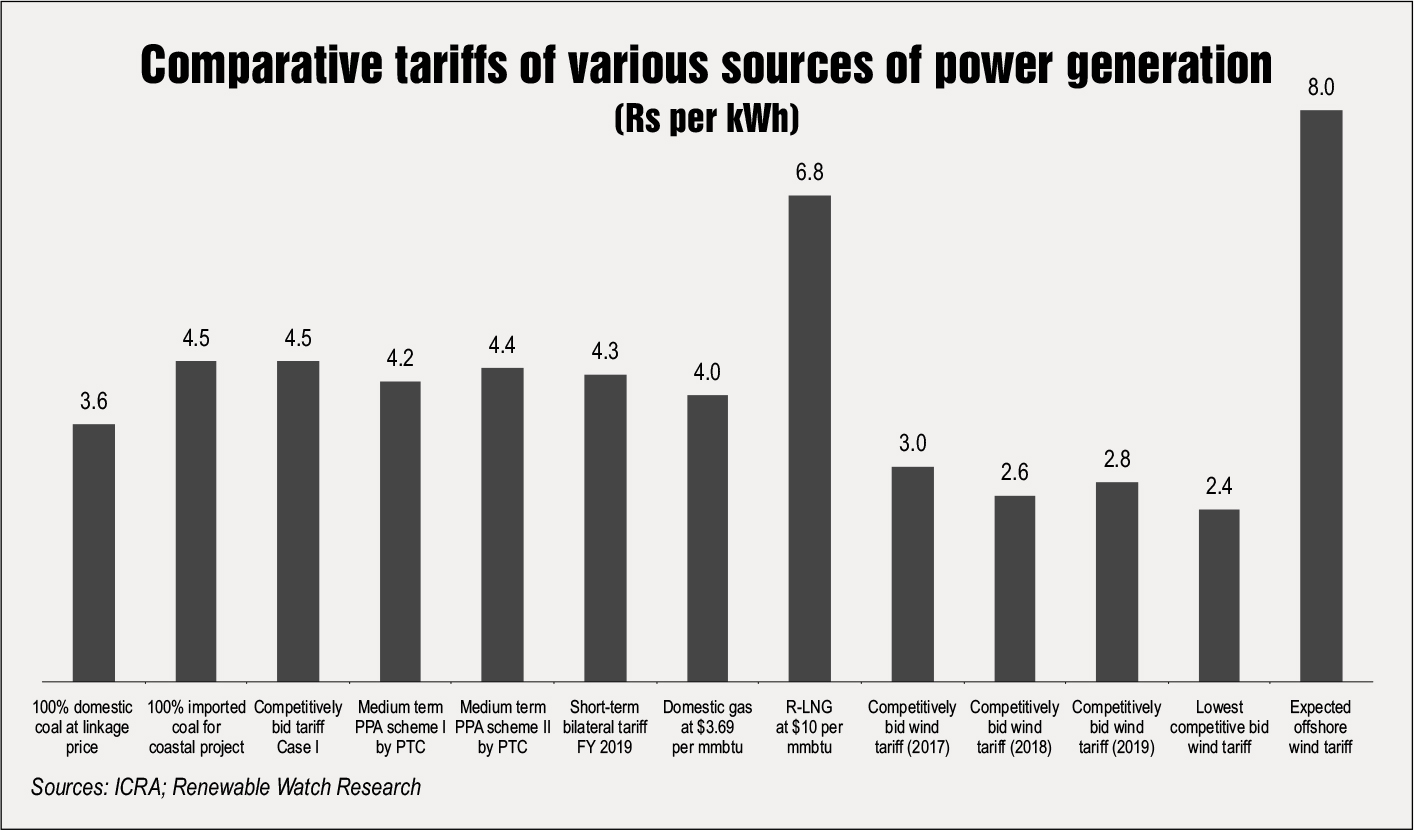 Currently, offshore wind power tariffs are over three times higher than the lowest onshore wind power tariff. This leads to a critical question of the discoms’ ability to procure such power. For large hydropower projects, high tariffs have prevented power offtake, leading to a continuously diminishing role of the segment in the country’s energy generation basket and nearly stalled development. Meanwhile, India was preparing to float a tender for 1 GW of offshore wind power development in October 2019. To this end, the country earmarked a viability gap funding (VGF) of around $900 million to bridge the gap between the cost of generating power from the project and the tariff set by offtakers. However, experts believe that even with the VGF, the cost of generation might only reduce to Rs 6-Rs 7 per kWh, higher than the Rs 3.50-Rs 4 per kWh that the offtaker in Gujarat has agreed to pay.

On the upside, while the initial cost may be high, it is only expected to reduce with the passage of time, evolution of technology and greater installation levels like in other countries where offshore wind power generation has matured. According to Bloomberg New Energy Finance, offshore wind costs in the second half of 2019 fell by about 12 per cent over the first half of the year. The costs had a steep fall of about 32 per cent over 2018, to reach a global benchmark LCoE of $78 per MWh. The US, the UK, the Netherlands and other parts of Europe have a significant offshore wind installed capacity and have been in operation for many years. Their policies and technological set-up are well established, which are critical factors in bringing down initial costs. Meanwhile, with technological advancements such as offshore wind turbines of sizes up to 10 MW, capital expenditure and energy generation have been optimised. Most of these factors are missing in the Indian offshore wind power market, leading to high initial costs.

Given the progress made so far, it is unlikely that India will meet its 5 GW offshore wind installed capacity target by 2022. Some capacity installation can be expected by 2023-24, but the 5 GW target may still be missed. The NIWE suggests that it would rather focus on meeting the 2030 target of 30 GW, a mammoth task in itself. As far as costs are concerned, Gujarat’s tariff indication may be a starting point for developers to find ways to reduce the LCoE.

Further, there is no lack of interest. The EoI invite floated in 2018 saw nearly every global developer participate, which may point towards a great deal of global interest in the Indian offshore wind segment. For now, the focus is on detailed data gathering and installation of LiDAR systems to unlock the huge offshore wind power potential along the country’s expansive coastline.