SunSource Energy began its operations in 2010 from a living room office in Gurugram, when its two founders decided to leave their jobs in the US and start a solar power venture in India. The company, which primarily focuses on the commercial and industrial (C&I) solar segment, has now become a key player in the Indian solar power segment. Starting as a bootstrap company, it has grown both in numbers and reach. Headquartered in Noida, SunSource Energy today has more than 200 employees and has expanded its presence to 25 states and several countries including the US, Singapore, Thailand and the Philippines.

In its decade-long journey, SunSource’s business model has evolved significantly as per the market needs. Some highlights include the construction of the largest solar rooftop project in the Philippines, and the commissioning and implementation of one of India’s first private solar rooftop power purchase agreement (PPA). Having started as an engineering consultancy for solar projects, the company is now a leading developer in the C&I solar space. In the initial years of its operation, SunSource Energy carried out design and engineering work for third-party developers. At that time, the company even did liaisoning work to bring developers and contractors together for carrying out a particular project. Now, engineering, procurement and construction (EPC) work is a very small part of what the company does. It does EPC largely for technologically challenging projects, while most of its focus is on increasing its independent power producer (IPP) portfolio. As an end-to-end project developer, the company has a combination of in-house and outsourcing models for operations and maintenance. It has a technical in-house team that takes care of supervisory control and data acquisition operations and data analytics, while panel cleaning is mostly outsourced.

SunSource Energy is backed by the Neev Fund, which is a joint venture between SBI Caps and the UK’s Department for International Development. The capital from this fund has made it possible for SunSource to invest in project development and it is using the capital from Neev Fund’s fourth investment to develop its own solar project assets across Uttar Pradesh, Rajasthan, Madhya Pradesh, Bihar, Odisha, Jharkhand, West Bengal and Chhattisgarh.

SunSource has set up around 350 MW of rooftop solar projects across 25 states in the country. In terms of portfolio, it has completed more than 115 MW of projects and there are multiple projects under development. Apart from rooftop solar EPC projects, SunSource has over 70 MW of behind-the-meter projects and 300 MW of projects are in an advanced stage of development. Further, 40 MW of solar capacity has also been set up in Thailand and Philippines. One of SunSource’s most recent project was a 1.2 MW solar power project for Shivamrut, a leading cooperative milk producers’ union in Maharashtra. The project will supply solar power to Shivamrut for a period of 10 years and is expected to offset over 15 million kg of CO2 emission during the course of its lifetime.

While the company specialises in rooftop solar projects, it has recently ventured into the open access-based solar segment and has 75 MW of open access projects under construction. It is setting up the first such project in Uttar Pradesh and is looking at other states as well. The 75 MW project in Uttar Pradesh is already at an advanced stage of implementation and is expected to be one of the largest open access-based solar projects in the state. It was granted approval under the UPERC Captive and Renewable Energy Generating Projects Regulations, 2014. The project was awarded under the open access project allocation process in the state and its power will be sold through long-term PPAs to C&I customers. This project is part of the 200 MW solar projects that the company has committed to developing in Uttar Pradesh.

SunSource’s key customer base includes large commercial companies, manufacturing companies, oil companies, airports, leading education institutes, textile companies and warehouses. Yakult, Jubilant FoodWorks, Jamia Millia Islamia, Indian Oil Corporation Limited (IOCL), Coca-Cola bottling plants and Thomson Press are some of its key clients. The company has a comprehensive credit assessment programme to safeguard itself from future risks of payment defaults. Before signing PPAs, the project returns and credit profile of customers are assessed in detail, and customers with credit ratings of above a certain threshold are only considered. Besides this, the company also assesses what percentage of the customers’ energy mix is fulfilled by solar. In addition, it looks at its own portfolio in terms of exposure to certain industries and corporates for the selection of clients.

Unlike many of its competitors, SunSource’s customer base does not include only multi-national corporations in big cities. MSMEs too provide a huge untapped opportunity, which the company is exploring as many MSMEs have good credit ratings. With deleveraging and credit improvements becoming a trend, there is no dearth of ideal customers for the company in even the lesser known areas of the country. Besides, with 50 per cent of the total power consumed by the C&I segment in India, SunSource believes that there is no serious concern about exhaustion of this customer base. 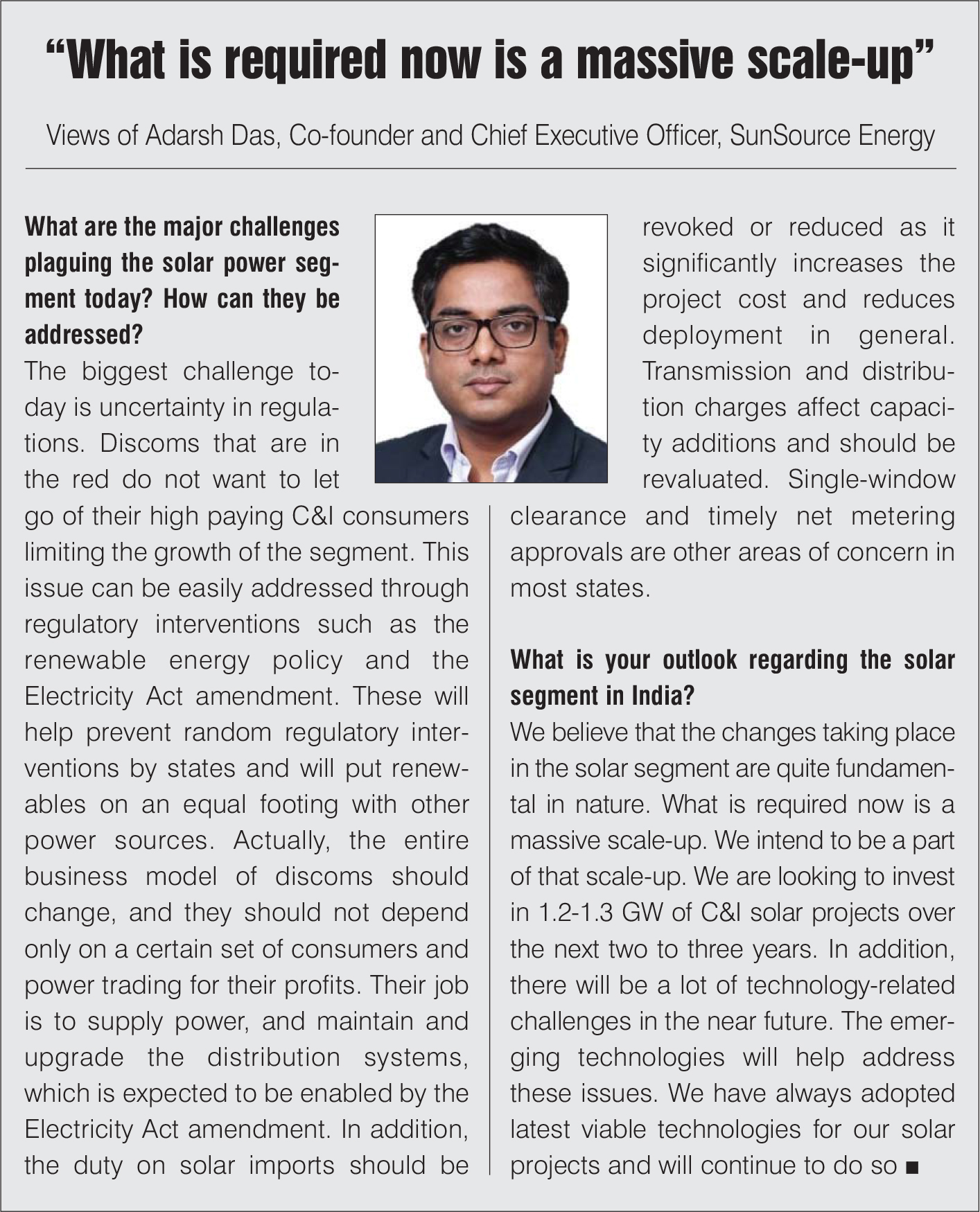 SunSource Energy has won several of Solar Energy Corporation of India’s solar with storage projects recently, including a project in Leh that will supply clean and stable power to the Military Engineer Services, by largely substituting their diesel genset power. Apart from Himachal Pradesh, the company is also executing projects in the Andaman and Nicobar, and Lakshadweep islands. With floating solar emerging as an important area of growth due to favourable market dynamics and land constraints, SunSource Energy is planning to actively participate in bids for these projects. In fact, the company has already set up a 100 kWp floating solar project at IOCL’s Naptha Cracker Unit in Panipat, and intends to set up more such projects.

From a purely design and engineering company to a leading solar IPP in the C&I solar segment, with a presence in over five countries, SunSource Energy has come a long way in the past 10 years. The company has slowly evolved and diversified from being a pure rooftop solar player to developing large solar projects to expand its size and scale. However, the solar segment is constrained by many challenges. Uncertainty in regulations is the most serious concern, especially in open access and net metering, which are the two major operating areas of the company. The regulations across many states have been becoming restrictive as discoms try not to lose their C&I customers. This can severely dampen the company’s future capacity addition. Meanwhile, multi-GW players with deeper pockets and a better appetite to absorb risks have entered the C&I segment, increasing the competition for SunSource Energy. Many smaller players, unable to make ends meet in this cut-throat space, have already exited the race altogether. Fully aware of the possible risks, SunSource Energy started diversifying quite early on to safeguard itself. Although its portfolio size is small compared to many large IPPs, its experience in the energy storage and floating solar segments and an open mind for selecting customers give it an edge over its competitors. The company is backed by strong investors and has ambitious plans to expand its project portfolio. Summing up, it will be interesting to see this company’s journey over the next few years as it navigates the roadblocks in the solar segment to invest in more than a GW of C&I solar projects.