The world’s transition to a low-carbon economy necessitates a major shift in the allocation of financial capital. Green bonds are fixed income securities whose proceeds are meant to be allocated to sustainable assets. The green bond market can serve as an important bridge between providers of capital, such as institutional investors, and sustainable assets, such as renewable energy projects.

From a slow start in 2007, and a market driven primarily by multilateral development banks, green bonds have experienced impressive growth over the past decade. With annual issuances approaching $190 billion in 2019, the growth has been marked by a greater diversification of issuer types. Although corporations and financial institutions are becoming dominant, sovereign issuances used to finance climate-aligned assets are increasing. European issuers have been joined by issuers from North America and, increasingly, from Asia Pacific. Renewable energy is the leading recipient of green bond proceeds, but most green bonds finance multiple sustainable solutions.

The International Renewable Energy Agency’s (IRENA) report, “Renewable Energy Finance: Green Bonds”, provides an overview of the investment trends in the renewable energy sector and highlights the need for green bonds to finance renewable energy projects. The report discusses the need and market overview for green bonds. It also suggests ways in which the true potential of green bonds can be realised. Renewable Watch presents excerpts from the report…

While hydropower still accounts for the largest share of the total renewable power capacity (50 per cent of the 2018 total), solar and wind power have accounted for the largest shares of both annual capacity installations and annual investments in recent years. Solar photovoltaic (PV) and wind power accounted for 90 per cent of the total renewable power investments in 2018.

In addition to the growing technological and geographical diversity, the renewable energy investment landscape is witnessing a proliferation of new business models and investment vehicles, which can involve different investors and finance all stages of a renewable asset’s life. Examples include the rise of the green bond market, growing interest in corporate procurement of renewable power, and new business models for small-scale renewables such as the pay-as-you-go model.

Despite generally positive investment trends, far more needs to be invested in renewables in order to meet sustainable development and climate goals, and realise the benefits of energy transformation.

A green bond is like a conventional bond in the sense that it both helps the bond issuer to raise funds for specific projects or ongoing business needs in return for a fixed periodic interest payment and ensures full repayment of the principal at maturity. A green bond differs in terms of its “green” label, which tells investors that the funds raised will be used for financing environmentally beneficial projects. The green bond market started about a decade ago and has undergone rapid growth in the past five years (2014-18), as global efforts to scale up finance for environmentally beneficial assets intensified. From a market dominated by development banks, green bonds have experienced not only growth in the total amount issued, but also a diversification of issuer types and sectors financed, and a widening geographic spread.

The need for further growth is equally large and urgent. IRENA has estimated that the energy transition investments needed to meet international goals for a climate-safe future amount to $110 trillion over 2016-50, or $3.2 trillion per year. For renewable power alone this implies a more than doubling of the current annual investment of $290 billion in 2018 to $660 billion through 2050. Green bonds can help bridge some of this financing gap.

Who defines “green” and attests to the appropriate use of green bond proceeds? There is no simple answer to this crucial question, although there is a convergence of market guidelines and standards. Some green bonds are self-labelled by issuers, but multiple standards also exist at the international level (Green Bond Principles, Climate Bonds Standard), regional level (Association of Southeast Asian Nations, upcoming European Union Green Bond Standard) and national level (Brazil, China, India, Japan, Morocco). Complementing these are third-party entities attesting to a bond’s green credentials via a pre-issuance review, post-issuance review or green bond certification. Such entities include rating agencies, specialised consultancies and non-governmental organisations such as Moody’s, Sustainalytics, CICERO and the Climate Bonds Initiative.

Internationally, the two standards that have become dominant are the Green Bond Principles and the Climate Bonds Standard. While the Green Bond Principles set out voluntary guidelines on potentially eligible categories of green projects, the process for project evaluation, the management of proceeds and reporting, the Climate Bonds Standard has more detailed criteria and requirements on what is green based on a category’s alignment with the Paris Agreement climate target, as well as on the management of proceeds and reporting. 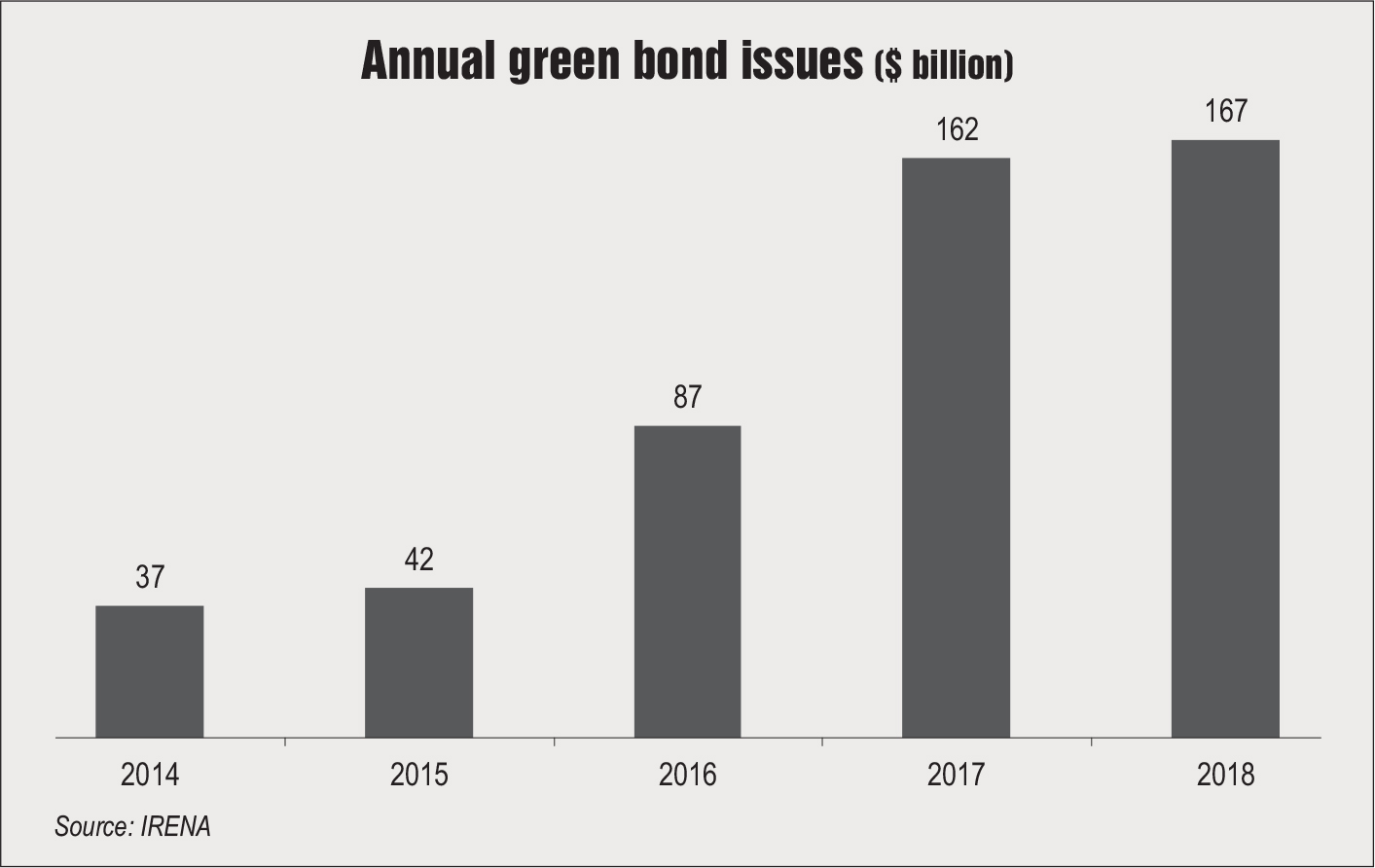 The green bond market has taken off in the past five years, with 2019 issuances expected to reach $190 billion. Along with the growing amount of capital raised, the market also expanded in its geographic reach, currencies in which green bonds are offered and witnessed a diversification of issuers. Renewable energy leads the use-of-proceeds categories and is present in around half of all green bonds issued.

The green bond market started a little over a decade ago with the European Investment Bank’s first issuance of a Climate Awareness Bond in July 2007, which allocated Euro 600 million to 14 renewable energy and energy efficiency projects. Over the past decade, such supranational institutions have taken a back seat to a growing variety of issuers from different regions – first from Europe, then North America, and increasingly from Asia Pacific and to a smaller extent from Latin America and Africa. The top three countries to issue green bonds in 2018 were the US ($34.2 billion), China ($31 billion) and France ($14.2 billion). Overall, annual global green bond issuances rose from Euro 600 million in 2007 to $37 billion in 2014 and $167 billion in 2018. For 2019, a new high of $190 billion is expected.

From a market driven primarily by multilateral development banks, green bonds are now issued by public and private institutions, including governments (local, state and national), government agencies, and companies (big corporations, financial institutions). For markets that are new to green bonds, however, multilateral banks remain important, as in the case of the African Development Bank, which has issued around 80 per cent of the outstanding green bonds in Africa.

Green bonds solely designated for renewable energy are mostly issued by corporations (67 per cent of the cumulative volume from 2010 to November 2019), followed by government agencies (18 per cent) and financial institutions (14 per cent). The top five countries that issued such bonds over the same period (2010 to November 2019) are the US (26 per cent of the total, by volume), Germany (20 per cent), Spain (12 per cent), China (11 per cent) and the Netherlands (9 per cent). In terms of issuance size, green bonds designated for renewables tend to be larger than other green bonds, with the average issuance size in the $100 million-$500 million range (for the period 2010 to November 2019).

While the promise and potential of the green bond market is huge, scaling up current issuance levels will require co-ordinated actions from multiple stakeholders to reduce market barriers. Those barriers include lack of awareness of the benefits of green bonds and hence a lack of local investor demand, lack of clarity regarding green bond guidelines and standards, a shortage of green projects and high transaction costs for green bonds compared to traditional bonds. IRENA has given some suggestions for addressing these challenges.

For policymakers and regulators, it suggests the adoption of long-term energy transition plans and enabling policies that support the overall growth and integration of renewable energy. It also suggests a review of investment restrictions faced by institutional investors, and the addition of clear sustainability mandates with ideally a minimum allocation to green assets such as renewable energy projects. The development of green bond standards that are aligned with leading climate-aligned standards through economic incentives such as funding of demonstration issuances, and grants to offset issuance and reporting costs are other key suggestions.

Meanwhile, for investors, the key suggestions are to raise awareness on the impact of climate change, build capacity, and facilitate the financing of climate-aligned assets such as renewables, through green bonds. Investors should also review and revise investment targets, internal incentives and overall management practices, to be in line with new long-term sustainability mandates. Cooperation with other institutional investors is necessary to learn about best practices regarding climate-aligned assets and financial instruments.

Public finance providers such as multilateral development banks and development finance institutions can help in de-risking renewable energy projects through the provision of risk mitigation instruments.

Rating agencies can provide green bond ratings that are aligned with leading standards and climate targets set in the Paris Agreement. IRENA suggests that international organisations, think tanks and NGOs can raise awareness and build capacity regarding climate impacts on financial assets, leading green bond standards, climate-aligned assets such as renewable energy, and new instruments such as green bonds.

While progress regarding the use of green bonds to date has been impressive, there is room for further growth and improvement. The cumulative issuances of green bonds are still below 1 per cent of the cumulative global bond issuances. To achieve further market growth, particularly in the renewable energy sector, coordinated actions from all the stakeholders are needed.