The government has set a target to install 100 GW of solar power capacity by 2022, of which 40 GW is to be achieved by the rooftop solar segment. Several policy measures have been announced across India for the large-scale deployment of solar rooftop projects. They include comprehensive rooftop solar policies and net metering regulations, along with streamlined utility interconnection processes, which have led to rapid deployments in the rooftop solar space, particularly in the commercial and industrial (C&I) solar segment.

As per Ministry of New and Renewable Energy (MNRE) statistics, the top 10 states account for nearly 80 per cent of the total installed rooftop solar capacity in the country. As of December 2019, Gujarat had the largest installed rooftop solar capacity of 416.63 MW, followed by Karnataka, Maharashtra, Rajasthan and Tamil Nadu. In August 2019, the MNRE released the results of its state rooftop solar attractiveness index, SARAL. Karnataka ranked first, emerging as the best state for setting up rooftop solar projects. The other states with high ratings include Telangana, Gujarat and Andhra Pradesh. All these states received a rating of A++ for rooftop solar attractiveness. Meanwhile, Jammu & Kashmir ranked last. According to the MNRE, the index is expected to introduce a healthy competition among states, and promote development in the rooftop solar segment. Andhra Pradesh, Tamil Nadu and Gujarat are the most attractive states for rooftop development in terms of high internal rates of return and short payback periods. Moreover, there is a considerable difference between the average grid tariff across C&I solar segments and the average rooftop tariff in these states. 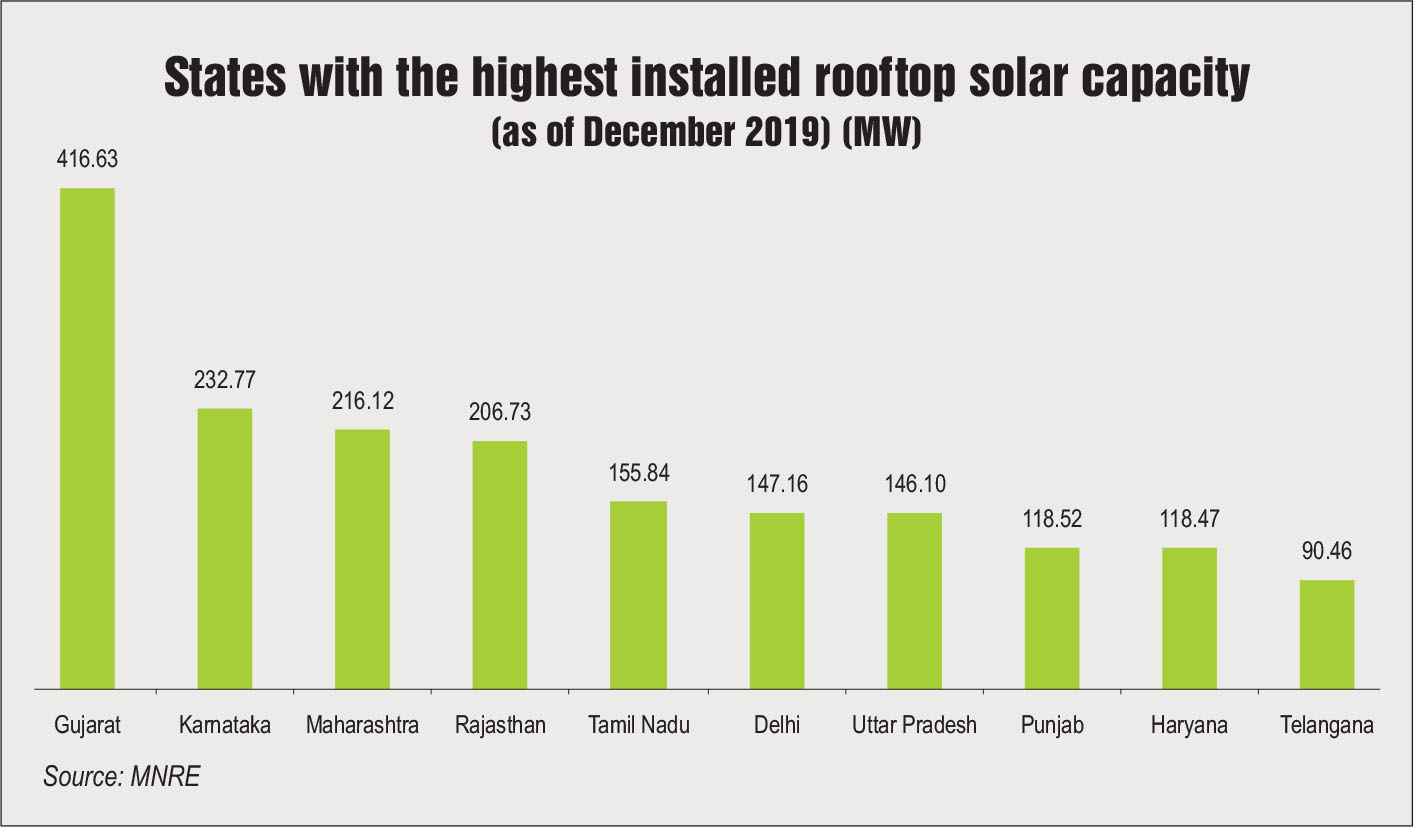 In December 2017, the MNRE had proposed a programme called SRISHTI (Sustainable Rooftop Implementation for Solar Transfiguration of India) to make rooftop solar implementation the responsibility of discoms. However, the proposed programme was never approved. After a long period of inactivity on the policy front, Grid Connected Rooftop Solar PV Programme Phase II was launched in March 2019. It aims to achieve 40 GW of rooftop solar capacity by 2022. As part of this programme, the central government will provide Rs 118.14 billion as central financial assistance (CFA) for capacity building, service charges and incentives to discoms. Further, it has increased the role of discoms under Phase II of the Grid-connected Rooftop Solar Programme. To encourage discoms, the government will provide them with performance-based incentives subject to the rooftop capacity achieved during a financial year. The MNRE has issued clarifications under the second phase of the Grid-connected Rooftop Solar Programme. These have been regarding subsidies for individual residential consumers (up to 10 kW) and the eligibility of participants in the bidding process. Further, it was clarified that the CFA for group housing societies and residential welfare associations will be limited to 20 per cent.

The tariffs for rooftop solar power in states have been falling consistently, lying in the range of Rs 1.38-Rs 5.20 per kWh. Among state agencies, Madhya Pradesh Urja Vikas Nigam Limited achieved a historic low tariff of Rs 1.38 per unit for central government buildings in its RESCO II rooftop solar tender released in October 2018. One of the key reasons for the decline in solar tariffs is economies of scale.

Recently, the Solar Energy Corporation of India issued a tender to develop 97.5 MW of rooftop solar capacity across the country. The tender includes capex and opex components. Under this tender, the states that are already leading in rooftop solar installations, such as Gujarat, Karnataka, Rajasthan and Tamil Nadu, recorded a tariff of about Rs 3.25 per kWh. Meanwhile, Uttarakhand, Himachal Pradesh and the northeastern states, as well as Lakshadweep and the Andaman & Nicobar Islands saw a tariff of Rs 1.89 per kWh under the RESCO model due to a higher subsidy component.

Historically, the capex model has been more popular, though the opex model is slowly gaining traction in the C&I solar segment. C&I consumers are increasingly moving to a set-up where they no longer have to invest capital or be involved in the operations. They just have to pay a minimal tariff to the developer. As a result, a large number of developers that work on the opex model have entered the space.

Overall, rooftop projects at government institutions have high bankability and attract lower tariffs, whereas private institutions may not have adequate creditworthiness and, therefore, attract higher tariffs. 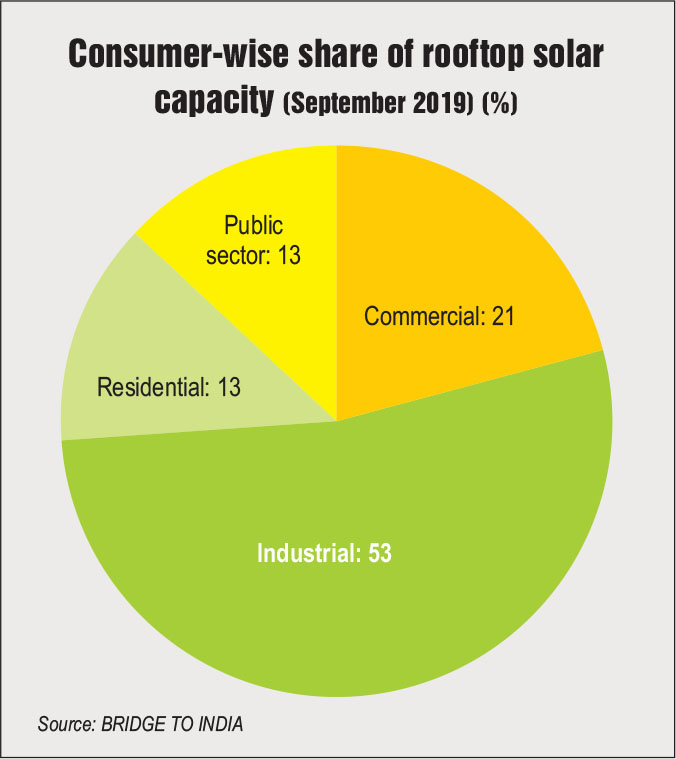 However, the segment is yet to overcome some critical challenges. One of them is the ineffective implementation of net metering regulations. Net metering is key to promoting growth across all user categories. Many states, especially those with financially weak discoms, are hesitant to implement net metering as it would mean revenue losses for them. With the increasing adoption of the net metering arrangement, discoms would lose their high-value customers. Further, there is already higher variability at the distribution transformer level and the high penetration of infirm solar power will only increase the risk of grid stability. Distribution systems are not yet equipped to manage the large-scale penetration of rooftop solar power.

Rooftop projects are technically more complex as each plant has to be customised according to the roof size and demand load. Further, in the rooftop engineering, procurement and construction, and product markets, a variety of players are offering products and services of varying quality. Thus, there is a need to put in place quality, safety and performance standards. Standardisation is also required for power purchase agreements in the segment, especially for systems based on the opex model.

On the demand side, high upfront costs are the key deterrent to the adoption of rooftop solar. While customers are looking for cheaper finance sources, lenders are not yet comfortable in financing rooftop projects on account of the low credit profile of borrowers and quality concerns related to equipment and contractors.

Further, there are often delays in subsidies and net metering approvals, as well as issues pertaining to roof ownership. Going forward, the government needs to ensure greater clarity and certainty on the policy front, rationalise subsidies, and facilitate coordination with the state agencies and entities.