Canada is experiencing a decline in per capita conventional energy consumption as it transitions towards a low carbon energy mix and achieves higher energy efficiency. The country witnessed a year-on-year reduction of 4.4 per cent in energy consumption during January 2016-August 2019, due to technological advancements, reducing cost of wind and solar projects, higher energy efficiency, and increase in electricity production from cogeneration plants.The ongoing developments in areas of grid-scale electricity storage, carbon capture and storage, and electric and alternative fuel vehicles have the potential to transform the country’s energy system. In view of this, the Canada Energy Regulator (CER) has released Canada’s Energy Future 2019 (EF2019) and predicted a slower energy demand growth rate, changing energy mix, shift towards renewable energy resources, and rise in electricity exports and natural gas production.

The economy is a key driver of the energy system. Economic and industrial output, inflation, exchange rates and population growth, all influence energy supply and demand trends. Due to Canada’s aging population, a slower economic growth is expected in the country during 2018-40. Under the reference case scenario, the EF2019, economic growth averages about 1.7 per cent annually during the projection period of 2018-40, lower than the 1990-2017 growth level of 2.7 per cent annually.

Over the next 20 years, Canadian energy use is expected to grow slowly owing to slower economic growth, improved energy efficiency, and the introduction of transportation emission standards and carbon pricing. During the period 2018-40, energy use is predicted to increase by less than 5 per cent compared to a population growth of 20 per cent and the size of the economy (measured as GDP), which will increase by over 40 per cent. This will lead to a 15 per cent reduction in energy use per person.

The energy sources being used to meet the demand are also changing. Canadians have started using more natural gas and renewable energy, and less oil and coal. This trend is expected to continue in the future as well. During 2017-40, the share of natural gas in the total energy mix of the country will increase from 35 per cent to 40 per cent. Meanwhile, an increase of 1 per cent is predicted in the share of hydro energy and other renewable energy sources in the country’s total energy mix during 2017-40, reaching 11 per cent and 8 per cent respectively by 2040. The share of oil products is likely to reduce from 35 per cent in 2017 to 32 per cent in 2040, of coal from 5 per cent to only 1 per cent, and of nuclear energy from 8 per cent to 7 per cent. The EF2019 includes programmes and policies influencing fossil fuel consumption, leading to a reduction in the use of coal and higher demand for natural gas for electricity generation. These include:

New technologies are a key reason behind the slow growth in energy use and the rising share of renewables. In recent years, wind and solar costs have reduced significantly around the world. In 2005, wind and solar comprised up to 0.2 per cent of Canada’s total generation, which increased to 5 per cent by 2017 and is likely to reach 10 per cent by 2040. During 2018-40, the installed wind capacity will nearly double, while solar will more than double. The EF2019 assumes that the cost of wind and solar power will fall by 20 per cent and 40 per cent respectively during 2018-40. The increasing use of renewables is making Canada’s energy mix even more diverse. The wind and solar capacity additions will help increase the already high share of non-emitting electricity generation. By 2040, the share of renewable and nuclear generation will increase to 83 per cent.

The EF2019 takes into account the existing programmes and policies that will influence Canada’s fossil fuel use. As compared to the previous projections of fossil fuel consumption, demand growth in the EF2019 reference case has been limited. This can be attributed to higher production of natural gas, which has low greenhouse gas (GHG) emission intensity. Coal, which has higher GHG emissions, will witness a decline over the outlook period. To meet Canada’s climate commitments, policy measures are being planned other than those included in the reference case. These are part of the Pan-Canadian Framework on Clean Growth and Climate Change, and various emerging provincial and territorial initiatives. As new and in-development measures become law, they will impact trends in Canada’s energy system.

Canada’s diverse electricity generation mix varies significantly across provinces and territories, reflecting the type of energy available and its economic viability, and the policy choices of the regulators. Over the past decade, there have been significant changes in Canada’s electricity mix, which continues to evolve in the EF2019 projection. From 2017 to 2040, the electric capacity will grow by 16 per cent, mainly driven by the increase in renewables and natural gas to meet the new demand growth, replacing coal-based units. The total electricity demand in the country will increase by nearly 1 per cent annually over the projection period. Nuclear power is a key part of Ontario and New Brunswick’s electricity systems. Over the projection period, nuclear units in Ontario will be refurbished, according to provincial plans.

Canada has a relatively low-emitting electricity grid. In 2017, 81 per cent of its generation was from non-emitting sources. This is primarily due to its large hydro base, which makes up the majority of the electricity produced in British Columbia, Manitoba, Quebec, and Newfoundland and Labrador. There has also been a significant increase in non-hydro renewables over the past few years. This growth is supported by policy development and improved economics. However, despite the recent shift towards market mechanisms by Alberta and Ontario regulators, leading to fewer policy incentives, the EF2019 predicts a significant growth in wind and solar capacity owing to the continued cost reduction. In the reference case scenario EF2019, the total electricity generation will increase by over 90 TWh from 2017 to 2040, an increase of about 14 per cent. Hydro, other renewables and natural gas will lead this growth, while coal and nuclear generation will decline. Renewable capacity addition and the decline of coal will reduce the overall emission intensity of Canada’s electricity mix. In 2017, Canada averaged 130 gm of CO2 equivalent per kWh, which will reduce to less than 80 gm of CO2 equivalent per kWh in 2040, a decrease of about 40 per cent. 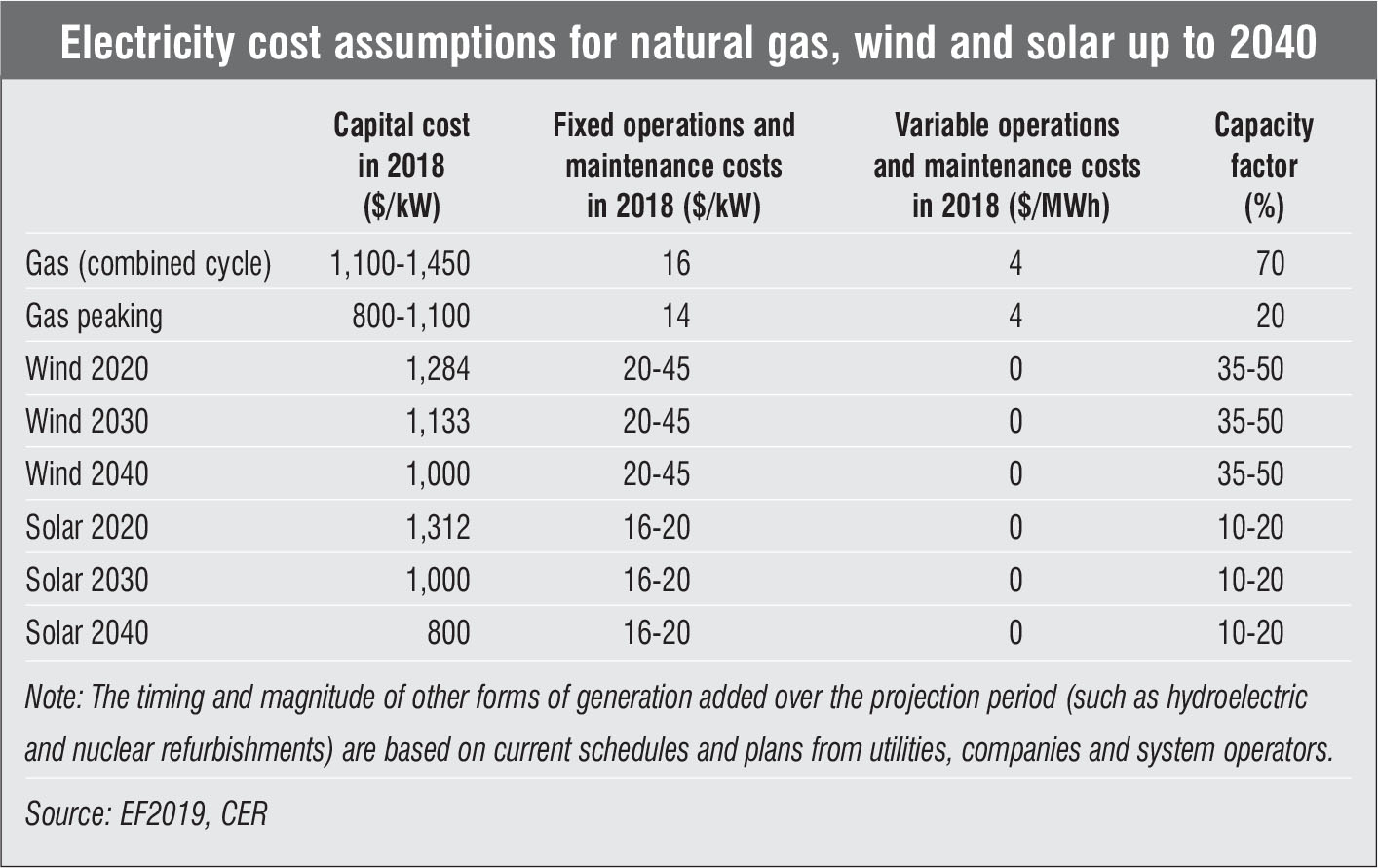 Canada is a net exporter of electricity to the US, and a large amount of electricity is also traded between provinces, mainly in eastern Canada. By connecting the electricity grids of different regions, grid operators can take advantage of the regional differences during peak demand periods. One of the reasons for increased interprovincial trade is the recently commissioned Maritime Link, which is a new energy loop for Atlantic Canada. Constructed by NSP Maritime Link Incorporated, a subsidiary of Emera Incorporated and an affiliate of Nova Scotia Power (NSP), in February 2018, the project involved the construction of a 500 MW, ±200 kV high voltage direct current (HVDC) line and a 230 kV alternating current transmission line. Under this, two 170 km subsea HVDC cables across the Cabot Strait were constructed from Cape Ray on Newfoundland to an area west of NSP’s Point Aconi generating station in Cape Breton. The project was constructed in three distinct geographical regions, the Newfoundland island, Cabot Strait and Nova Scotia. This new transmission corridor will create stability and reduce reliance on fossil fuel generation in the region. The project will allow Nova Scotia to import more power from Newfoundland and Labrador, reducing the coal generation in the province. This link could also facilitate renewable energy development in the region. Other future lines with the US include the 320 kV direct current (DC) Lake Erie interconnector between Ontario and Pennsylvania; the Manitoba-Minnesota Transmission Project; and the 320 kV DC Quebec-New Hampshire interconnection. These projects aim to deliver clean, emission-free electricity from Canada to the US. The country is investing in other initiatives, programmes and policies in the power transmission segment to further improve energy efficiency and energy export or exchange. 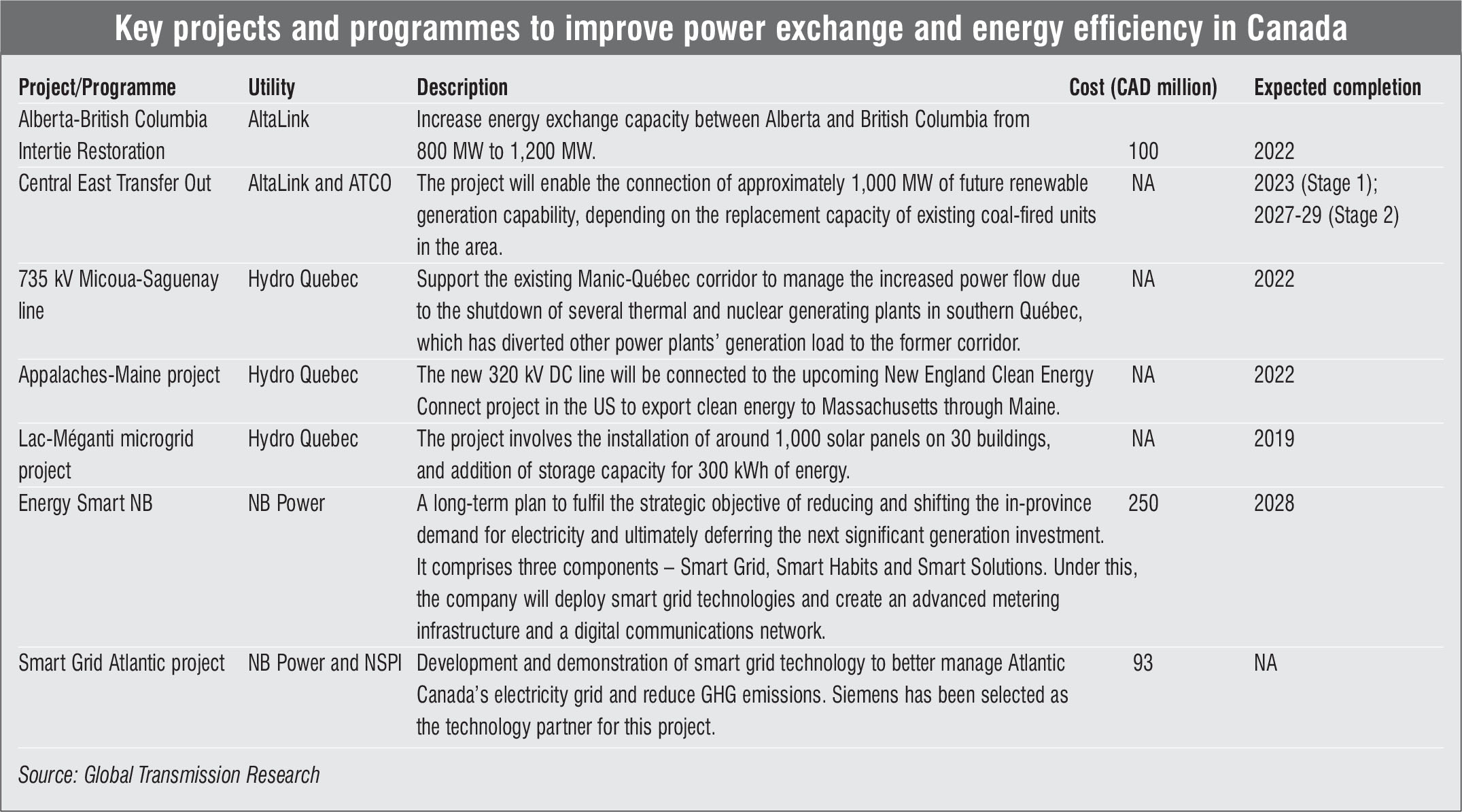 Despite the slow growth in energy demand, the country is investing in its power sector to expand its clean energy base and achieve its CO2 reduction target. In this regard, it has launched various power generation and transmission projects, which are at various stages of development.