For the period 2019-20, Maharashtra has the highest projected power demand across all states in India, estimated at about 153,540 MUs. It has been working towards improving its energy deficit and has managed to bring it down from 0.2 per cent during 2018-19 to 0.1 per cent during 2019-20. The state had the highest installed power capacity (43.7 GW, as of December 2019) in the country. At 9,572 MW, renewable energy makes up about 21 per cent of the total installed power generation capacity in the state. Renewable energy deployment has been on the upswing in Maharashtra and state wise, it accounts for the fourth highest installed capacity after Gujarat, Karnataka and Tamil Nadu.

The state’s renewable energy development initiatives have largely been led by Maharashtra State Power Generation Company Limited (MAHAGENCO) and Maharashtra State Electricity Distribution Company Limited (MSEDCL). MAHAGENCO has been working on land acquisition to develop a 600 MW ultra mega renewable energy project, which will be developed in part through a consortium with NTPC Limited. Meanwhile, MSEDCL has chalked out its renewable energy procurement plan to ensure compliance with the 15 per cent RPO target set by the Maharashtra Electricity Regulatory Commission (MERC) for 2019-20. Of this RPO target, 3.5 per cent is for solar while the remaining is for non-solar. However, due to poor response to tenders and the unavailability of expected energy from the contracted capacity, MSEDCL is unable to meet its RPO targets.

The state has scaled up its efforts to install solar power projects in order to meet its RPO as well as 2022 targets, an area in which it has continuously defaulted. Thus, the generation of solar power in Maharashtra has doubled from 1,100.67 MUs during 2017-18 to 2,206.62 MUs during 2018-19. It has also been issuing tenders through state discom MSEDCL for procuring solar power through intra-state grid connected projects. In November 2019, the state floated a tender to develop 500 MW of intra-state solar power projects (Phase IV). In the auction, Juniper Green Energy emerged as the lowest bidder by quoting Rs 2.89 per kWh tariff to secure 150 MW of solar projects. The remaining 350 MW was won by MAHAGENCO at a tariff of Rs 2.90 per kWh.

Earlier this year, the Solar Energy Corporation of India (SECI) successfully auctioned 250 MW of grid-connected solar power projects under Phase I of the Dondaicha Solar Park in Dhule. Talettutayi Solar (Solar Arise) quoted the lowest tariff of Rs 2.87 per kWh to develop 50 MW of capacity. The remaining capacity was allocated to Tata Power and NTPC with each getting 100 MW. In July 2019, MAHAGENCO invited bids for the development of 137 MW of solar projects in three districts of the state. Central Electronics Limited (CEL) and Bharat Heavy Electricals Limited (BHEL) have also floated tenders to develop 50 MW of solar power. While CEL projects ranging from 500 kW to 10 MW would span across various locations, the BHEL project would be set up in Kaudgaon.

In September 2019, MSEDCL had issued a tender for 1,350 MW of solar projects to be developed across 30 districts. However, this received only one bid for 5 MW for a project in Baramati district. Following this, MSEDCL reissued the tender, raising the ceiling tariff to Rs 3.30 per kWh from the previous Rs 3.14 per kWh to attract more bidders. This was not the only large project to be retendered in 2019. In June 2019, MAHAGENCO retendered 750 MW of solar projects for agricultural feeders across the state. Initially issued in June 2018, the tender was delayed and re-issued due to poor response. However, low tariff ceilings remain a challenge in the bidding for solar projects. For instance, MERC recently allowed MAHAGENCO and MSEDCL to procure solar power at rates discovered through competitive bidding. This was in response to their joint petition seeking the commission’s approval for the adoption of tariff at Rs 2.99 per kWh for 50 MW of solar power projects under the Chief Minister’s Solar Agriculture Feeder Scheme.

The scheme is being implemented for the development of 2-10 MW of decentralised solar projects, which will be directly connected to distribution substations and supply daytime power to agricultural pumps owned by farmers. It will involve the installation of 100,000 agricultural solar pumps – 25,000 in Phase I, 50,000 in Phase II and 25,000 in Phase III. Some of the key benefits of solar pumps for farmers are free and uninterrupted power supply and lower operating costs compared to diesel pump sets. MSEDCL already has around 800 MW of capacity in the pipeline under this scheme while around 500 MW is likely to be contracted under PPAs with MAHAGENCO. Cumulatively, 500 MW of solar projects are expected to be commissioned by March 2020, benefiting around 200,000 farmers. Another 3,000 MW of capacity is expected to be commissioned by 2024-25; this will provide power to farmers for eight hours a day.

Another emerging trend in the renewable energy space is floating solar. Maharashtra is developing four floating solar power projects at four of its dams — the backwaters of Wardha, Bebala, Khadakpurna and Pentakli. The total capacity to be installed is 500 MW with an estimated investment of Rs 4.45 million per MW. The projects will be allocated under the Swiss Challenge method, which is a form of bidding.

While Maharashtra has a cumulative installed wind power capacity of 5 GW, making it the third largest state in terms of wind power capacity after Gujarat and Tamil Nadu, it has been unable to meet its non-solar RPOs. Therefore, the state government and MSEDCL have facilitated the tendering process to procure more wind power. Earlier, MSEDCL had attempted to procure wind power through competitive bidding with a ceiling tariff of Rs 1.97 per kWh. However, after not receiving any response due such a low tariff cap, the discom decided to increase the tariff ceiling in more recent tenders. In June 2019, it invited bids for the procurement of 500 MW of wind power and set the ceiling tariff at Rs 2.52 per kWh. However, the tender was undersubscribed, receiving bids for only 7 MW. MSEDCL floated another 500 MW wind tender in September 2019. The ceiling tariff for this tender was set at Rs 2.95 per kWh, which was higher than the previous ones. In December 2019, yet another wind power tender followed, this time the ceiling tariff sank back to Rs 2.52 per kWh.

In 2018, the Ministry of New and Renewable Energy (MNRE) issued the wind-solar hybrid policy, and Maharashtra has been actively working towards promotion of such projects. In September 2019, MSEDCL issued a tender for the procurement of hybrid renewable power. Not only is this expected to help in meeting the RPOs, but the tender also aims to promote hybrid projects for efficient utilisation of land and transmission infrastructure. The hybrid projects will be developed on land parcels belonging to the Maharashtra Energy Development Agency and will be allocated through a competitive bidding process. The total capacity to be tendered is 80 MW, which will be distributed across five locations. A ceiling tariff of Rs 2.80 per kWh has been set for these projects. This tariff is slightly higher than the average wind tariff. Meanwhile, the state discom has issued tenders for the procurement of power from bagasse-based cogeneration projects. A 50 MW tender was floated in October 2019; it required each of the constituent projects to have a minimum capacity of 5 MW. In addition, a tender was floated to procure 100 MW of bagasse-based power with a ceiling tariff of Rs 3.56 per kWh. The projects which are already supplying power to MSEDCL under an existing PPA, which has already expired or is going to expire by March 31, 2020, will be eligible to participate in the bidding process. 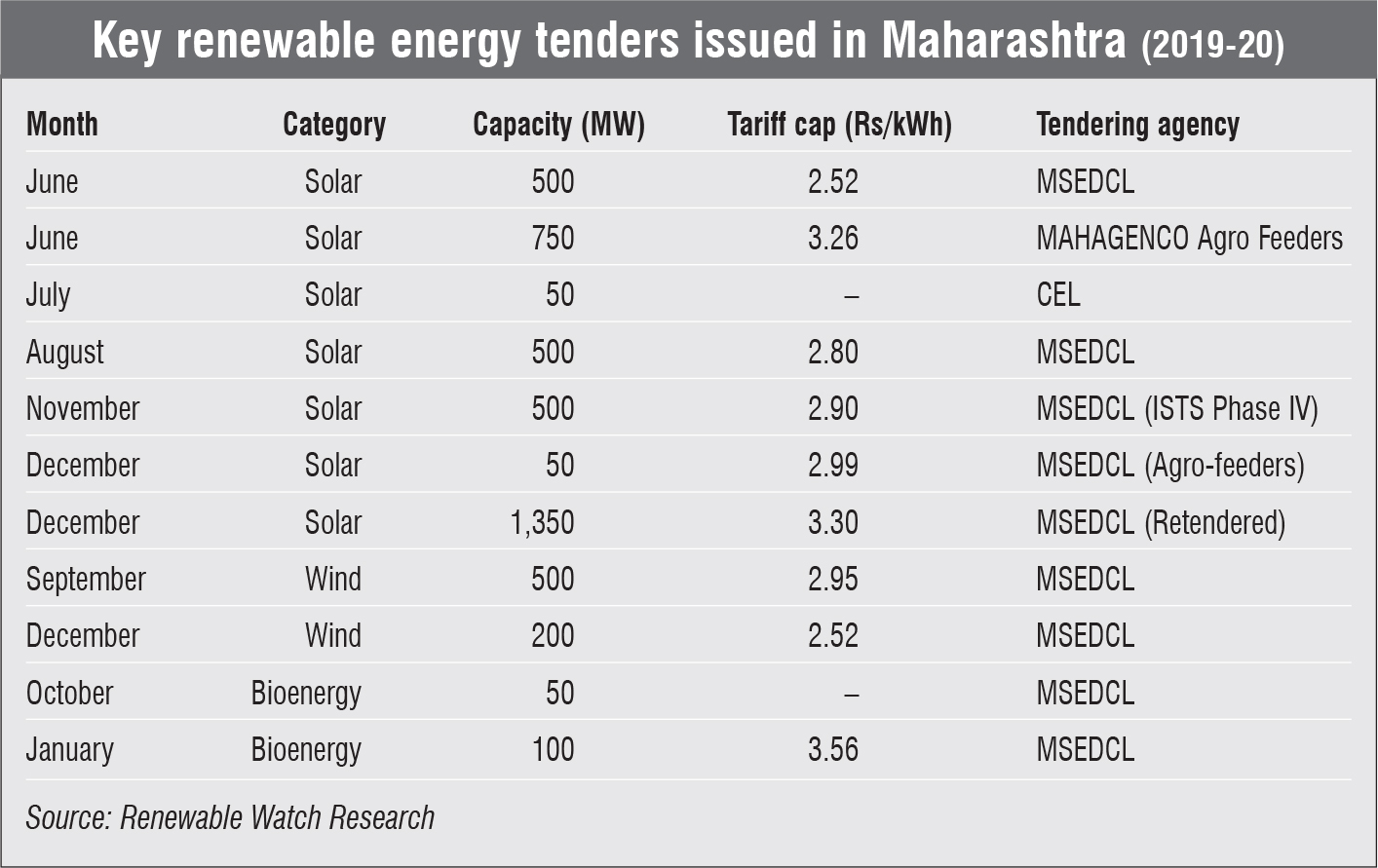 In December 2019, MERC issued new net metering regulations, which are expected to come into effect with their publication in the official gazette. According to the new regulations, the net metering arrangement or net billing arrangement will be permitted by the distribution licensee on a non-discriminatory basis to eligible consumers that have already installed or are likely to install a renewable energy generating system connected to the grid. The cumulative capacity of renewable systems under net metering and connected to a discom’s transformer should not exceed 70 per cent of its rated capacity.

In November 2019, Maharashtra issued a draft regulation stating that it could go back to gross metering and roll back net metering for all segments except for the residential segment. This draft perturbed solar developers who claimed that rolling back the net metering regulations would hamper the growth of the solar rooftop segment. Meanwhile, discoms including MSEDCL have been opposing net metering for solar rooftop consumers. They claim that net billing has resulted in revenue loss, with MSDECL alone quoting losses of Rs 2.24 billion up till March 2019.

MSEDCL received an integrated rating of “A” by ICRA Limited for the period 201 7-18, which translates to the utility having “high operational and financial performance capability”. However, the discom continues to grapple with certain financial problems. MSEDCL has also been unable to clear its dues to independent power producers in a time-bound manner, and for disregarding the previous orders of the commission.

The MERC issued a draft policy in October 2019 announcing its RPO for the period 2020-25. The solar RPO targets mentioned in the draft policy start at 4.5 per cent, going up to 13.5 per cent over the next five years. To achieve this target, a total solar capacity of 12,500 MW would be required by 2024-25 whereas the current installed solar capacity (as of end 2019) in the state stands at 1,664 MW. In its feedback on the draft policy, MSEDCL stated that the commission’s proposal to reduce the solar RPO target of 13.5 per cent by 2024-25 is unfavourable. 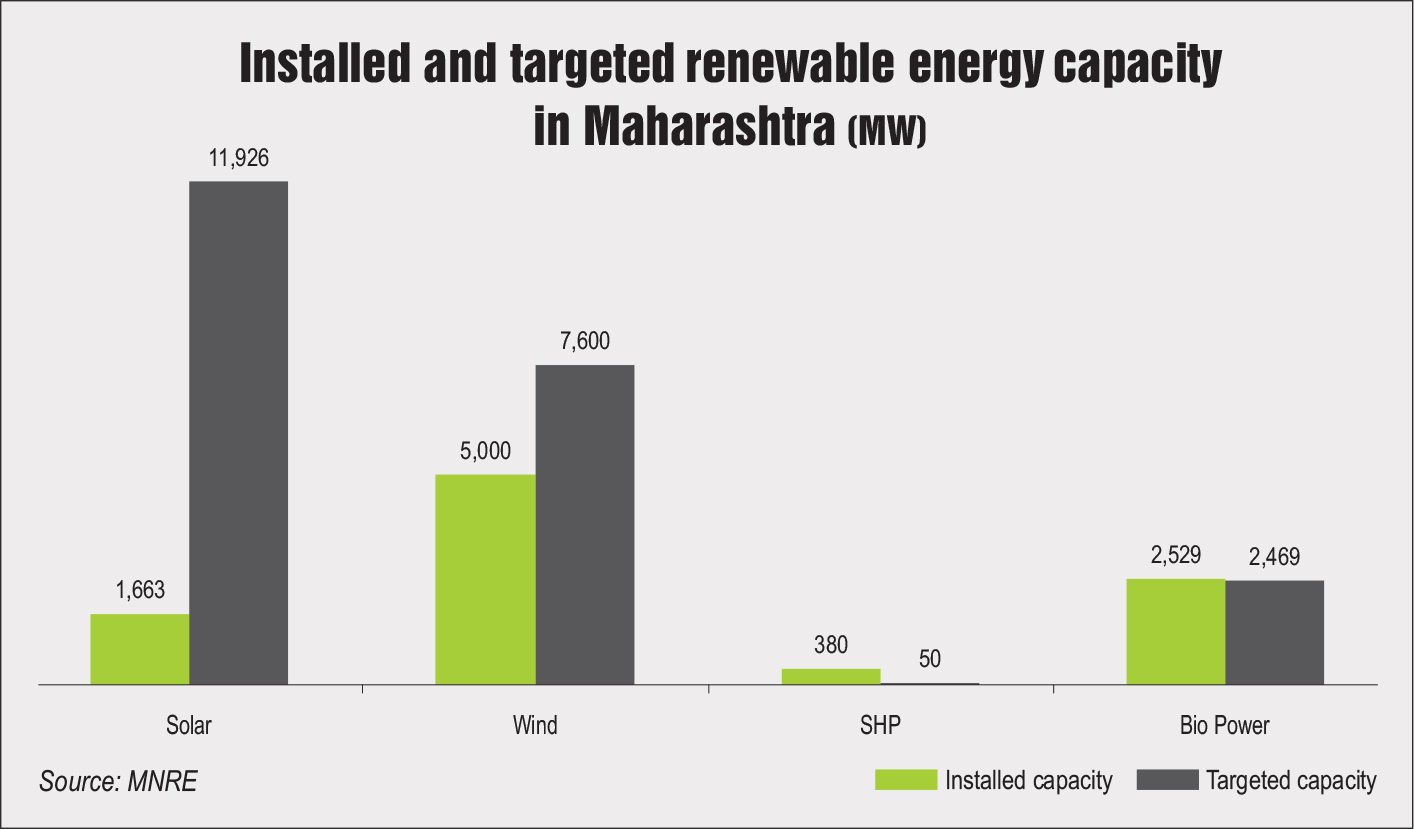 The 2022 clean energy targets set by the MNRE for Maharashtra are 11,926 MW for solar power, 7,600 MW for wind, 50 MW for small-hydro and 2,469 MW for biomass-based power. As of December 2019, only 14 per cent of the solar power target and about 66 per cent of the wind power target had been achieved. Meanwhile, small-hydro and bioenergy have surpassed the targets. The current installed capacity for small-hydro is 380 MW, which is considerably higher than the target of 50 MW.

The solar and wind segments have a long way to go in terms of achieving their respective 2022 renewable energy targets. The solar segment is especially under pressure since it has only achieved a very small portion of its target and has been failing to meet solar RPOs in recent years. Further, solar tenders have not been receiving positive response. Retendering with higher ceiling tariffs is expected to attract more developers to bid and a fresh set of projects to enter the pipeline. In the rooftop space, keeping net metering regulations attractive will help in facilitating the development of larger projects, while the Chief Minister’s Solar Agriculture Feeder Scheme is expected to promote uptake of solar power. Although achieving targets in time, whether it is RPO or capacity addition, might be too optimistic for now, Maharashtra has been proactive in fast-tracking growth in its solar and wind segments.