Using the same area of land for both solar photovoltaic (PV) and agriculture is emerging as a popular practice in several parts of the world. Commonly referred to as agrophotovoltaics (APV), agrovoltaics and solar sharing, this trend of dual use of land by installing solar panels above crops is particularly finding takers in countries where land is scarce and expensive.

The APV technique of generating solar power is known to have been originally developed by Adolf Goetzberger and Armin Zastrow in 1981, as a way to address the solar generation versus crop cultivation issue surrounding arable land use. Following this, Japanese scientist Akira Nagashima came up with the idea of combining solar PV systems with agriculture to share the excess sunlight between the two. According to him, once the light saturation point or the maximum number of photons absorbable by a plant species is achieved, any more photons will not increase the rate of photosynthesis. Based on this, he developed his first APV prototypes in Japan in 2004, and tested them in a couple of fields with different shading rates and a variety of crops. Since then, the APV concept has been widely implemented in Japan and has also expanded to other parts of Asia and Europe. The Fraunhofer Institute for Solar Energy Systems ISE (Fraunhofer ISE) in Germany is carrying out experiments with APV in different corners of the world, including Chile, Vietnam and India, in order to assess the cost viability and potential synergies from these systems.

Land availability is a crucial factor in India’s ambitious plan to have 100 GW of commissioned solar capacity by 2022, as 60 GW of the total target is expected to come from ground-mounted projects. Since rooftop solar has not really picked up pace in the country and floating solar is still a few years away from maturity, utility-scale solar is being considered as the only available alternative for achieving the tall solar power targets. With solar projects requiring 4.5-5 acres of land per MW, the total land requirement for the targeted 60 GW ground-mounted solar capacity is 270,000-300,000 acres. For a country where industries have historically faced land acquisition issues, it is going to be a challenging task to get large tracts of land for solar power deployment. In view of the land acquisition problem due to the interference of local authorities and delays in the transfer of land titles, the solar park development scheme was framed to provide respite to developers. For solar parks, the central and state governments are responsible for making land and other related infrastructure available to developers. However, many solar parks have been delayed due to resistance by landowners and bureaucratic hurdles in allocating land, thus impacting solar power growth.

Against this backdrop, APV can prove to be a boon for the country’s solar power ambitions. With a large majority of land being used for agriculture and related activities, this PV-cum-agriculture technique can provide a win-win situation for both farmers and solar project developers. It would allow farmers to continue growing crops and supplement their livelihood with rentals from the land used for solar power development. There would also be many indirect advantages resulting from the sharing of light between agriculture and solar PV.

The most researched APV techniques are solar arrays with space in between for crops, stilted solar arrays above crops and greenhouse solar arrays. All these systems have variables such as the tilt angle, crop variety, climatic conditions, the height of solar arrays and other conditions that are used for maximising the solar energy absorbed by both panels and crops. For APV, solar panels are usually mounted a few metres above the ground to leave ample space for plant growth, livestock movement and the working of farm machinery. Studies have shown that several types of crops benefit from this technique.

In India’s sub tropical climate, the shading effect provided by solar panels above crops can lower the temperature and reduce water evaporation from the soil, especially during the long summer mon-ths. In fact, a pilot study conducted by Fraunhofer ISE in Maharashtra demonstrated that the shading effect and less evaporation result in up to 40 per cent higher yields in tomato and cotton crops. In addition, nearly double the land use efficiency could be achieved in certain cases.

Large and prosperous farms can also opt for APV to generate solar power for captive consumption, to run water pumps or for threshing or grinding or meeting their household electricity requirements. APV deployment will greatly help them to decrease their power bills as well as diesel consumption in off-grid water pumps. They can even sell the surplus power back to the local discom and avail of net metering benefits if the policy allows, thereby enhancing their income further. 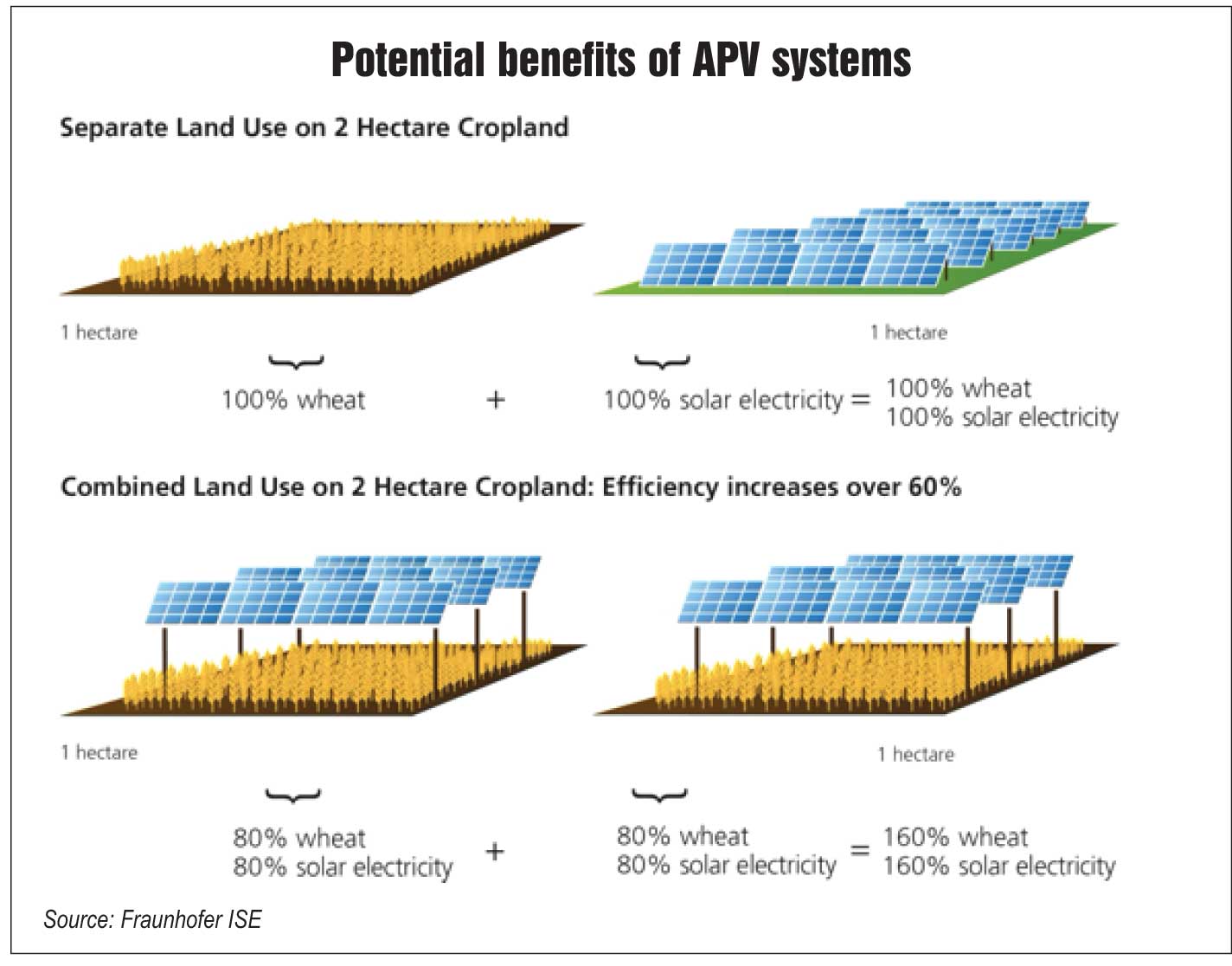 Given that APV systems offer manifold benefits, there has been a rise in the number of small projects with solar panels installed over crops. One of the first projects is a 105 kW pilot APV system installed by the Central Arid Zone Research Institute in 2017 at Jodhpur along with a smaller 25 kWp system at the organisation’s regional research station at Bhuj. The 1-acre system at Jodhpur comprises three blocks of 28 square metres of panels plus a rainwater harvesting tank, while the system at Bhuj is spread across 666 square metres. The pilot proved successful and has been replicated by Junagadh Agriculture University and Sardar Kushinagar Dantiwara Agriculture University, both in Gujarat, Amity University in Noida, Banda Agricultural University in Madhya Pradesh and the Central Electronics Engineering Research Institute, Pilani, among others.

Meanwhile, engineering, procurement and construction company Harsha Abakus Solar has set up two 1 MW APV projects in Jamnagar and Kutch, in Gujarat. Both these 4.5 acre solar installations have been put up on unused land within the boundaries of thermal power stations to study the crop-growing potential in such areas through the use of APV. Another large project is located at the Cochin International Airport, where a 29 MW solar power plant houses vegetable crops underneath. The APV plant produced 60 tonnes of vegetables in 2018 alone, according to media reports.

Apart from these isolated cases, a number of APV projects are being taken up by state governments due to the benefits that it will offer to farmers. For instance, Maharashtra State Power Generation Company Limited invited an expression of interest for setting up of a 10 MW APV capacity, involving the creation of greenhouses and poly sheds, in September 2018. The aim was to experiment with ways of reducing the impact of solar deployment on agricultural land. As per the project plan, solar panels would be installed at a height so that the space beneath can be used for horticulture and floriculture, and these sheds would then be given to agro-developers, co operative organisations, farmers and unemployed youth from nearby rural areas for commercial polyhouse farming. The tender also includes operations and maintenance services, and agricultural production for 25 years on a pilot basis. According to reports, the Bihar government is motivating farmers to construct fish ponds with solar panels on top. In October 2019, the National Solar Energy Federation of India gave recommendations to the Ministry of New and Renewable Energy regarding the need for a greater push for APV systems. The federation has suggested that specific standards or guidelines should be framed for farmlands where solar and agriculture can be co-located.

According to Fraunhofer ISE, APV systems usually cost the same as rooftop solar ones. This means APV systems are slightly more expensive than conventional ground-mounted utility-scale systems. However, APV systems have many significant financial and social advantages that can easily compensate for the higher costs. The primary benefits are that land acquisition challenges are taken care of to some extent for developers and farmers get an additional source of income. Farmers no longer have to choose between growing food or giving their land for solar power development, as they can do both, while increasing their crop yield. Solar power along with farming, can provide a viable answer to the “food vs fuel” debate. Going forward, this win-win technique will benefit farmers, developers and governments alike.