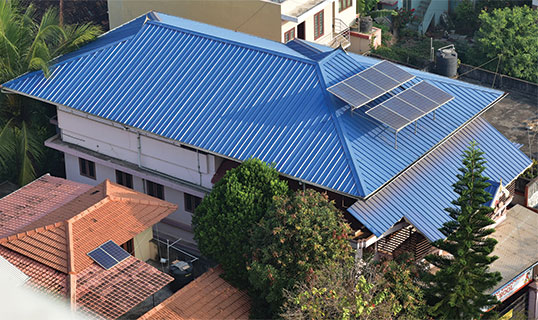 The Maharashtra Electricity Regulatory Commission (MERC) has issued new regulations for net metering. The regulation will apply to net metering and net billing arrangements (gross metering), and grid-connected renewable energy generating systems tied to the consumer’s meter. According to the new regulations, the net metering arrangement or net billing arrangement will be permitted by the distribution licensee on a non-discriminatory, ‘first come, first serve’ basis to eligible consumers who have already installed or are likely to install a renewable energy generating system connected to the distribution company’s network.

As of March 2019, India’s total installed rooftop solar capacity reached almost 3.7 GW. Among the states, Maharashtra is in the lead with 618 MW of rooftop installations, which account for 17 per cent of the total installations in the country. Rajasthan has also shown impressive growth over the past year in terms of installed capacity, from only 167 MW to 393 MW. The amendment to Rajasthan’s net metering regulations for rooftop and small solar systems was a key development as it provided an energy accounting and settlement mechanism and an exit option for consumers under the net metering system. Tamil Nadu is not far behind, with an installed rooftop solar capacity of over 365 MW, mainly in the industrial and commercial segments. With 314 MW of installed capacity, Gujarat continues to be in the fourth position.

Karnataka, which holds the fifth spot with an installed capacity of 298 MW as of March 2019, has been promoting rooftop solar additions under the Smart Cities Mission. To fast-track the approval process, the state electricity regulatory commission had stated that rooftop solar installations below 1 MW do not need to be inspected by the relevant authorities.

Delhi may not be on the top of the list in terms of installed rooftop solar capacity, but unlike other state discoms, Delhi’s discoms are supporting and promoting rooftop solar. While setting up rooftop solar systems has been a complicated procedure across India, Delhi has streamlined the process to provide approvals within a month. Moreover, there is no cap on system size under the DERC net metering regulations. The partially privatised discoms in Delhi have realised that the huge cost of setting up distribution transformers, distribution losses and energy thefts can, in fact, be lowered with consumers becoming prosumers of electricity.