The pressure to meet policy targets and savings in electricity bills have been the key factors driving the uptake of rooftop solar systems in India. However, the growth has not been as impressive as envisaged by policymakers. The rooftop solar segment is facing the same challenges that plague the overall energy sector. These include bad financial health of discoms and their reluctance to promote rooftop solar, high electricity subsidies, and numerous state-wise regulations and restrictions on open access of electricity. Some of these challenges are now being addressed by the government to maximise the potential of the rooftop solar segment.

As of March 2019, India’s total installed rooftop solar capacity reached almost 3.7 GW. Among the states, Maharashtra is in the lead with 618 MW of rooftop installations, which account for 17 per cent of the total installations in the country. Rajasthan has also shown impressive growth over the past year in terms of installed capacity, from only 167 MW to 393 MW. The amendment to Rajasthan’s net metering regulations for rooftop and small solar systems was a key development as it provided an energy accounting and settlement mechanism and an exit option for consumers under the net metering system. Tamil Nadu is not far behind, with an installed rooftop solar capacity of over 365 MW, mainly in the industrial and commercial segments. With 314 MW of installed capacity, Gujarat continues to be in the fourth position. 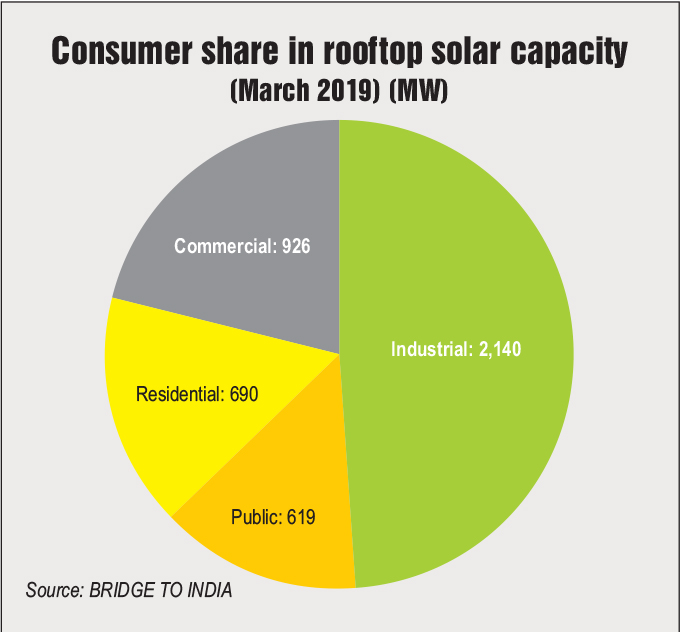 Karnataka, which holds the fifth spot with an installed capacity of 298 MW as of March 2019, has been promoting rooftop solar additions under the Smart Cities Mission. To fast-track the approval process, the state electricity regulatory commission had stated that rooftop solar installations below 1 MW do not need to be inspected by the relevant authorities.

Delhi may not be on the top of the list in terms of installed rooftop solar capacity, but unlike other state discoms, Delhi’s discoms are supporting and promoting rooftop solar. While setting up rooftop solar systems has been a complicated procedure across India, Delhi has streamlined the process to provide approvals within a month. Moreover, there is no cap on system size under the DERC net metering regulations. The partially privatised discoms in Delhi have realised that the huge cost of setting up distribution transformers, distribution losses and energy thefts can, in fact, be lowered with consumers becoming prosumers of electricity. 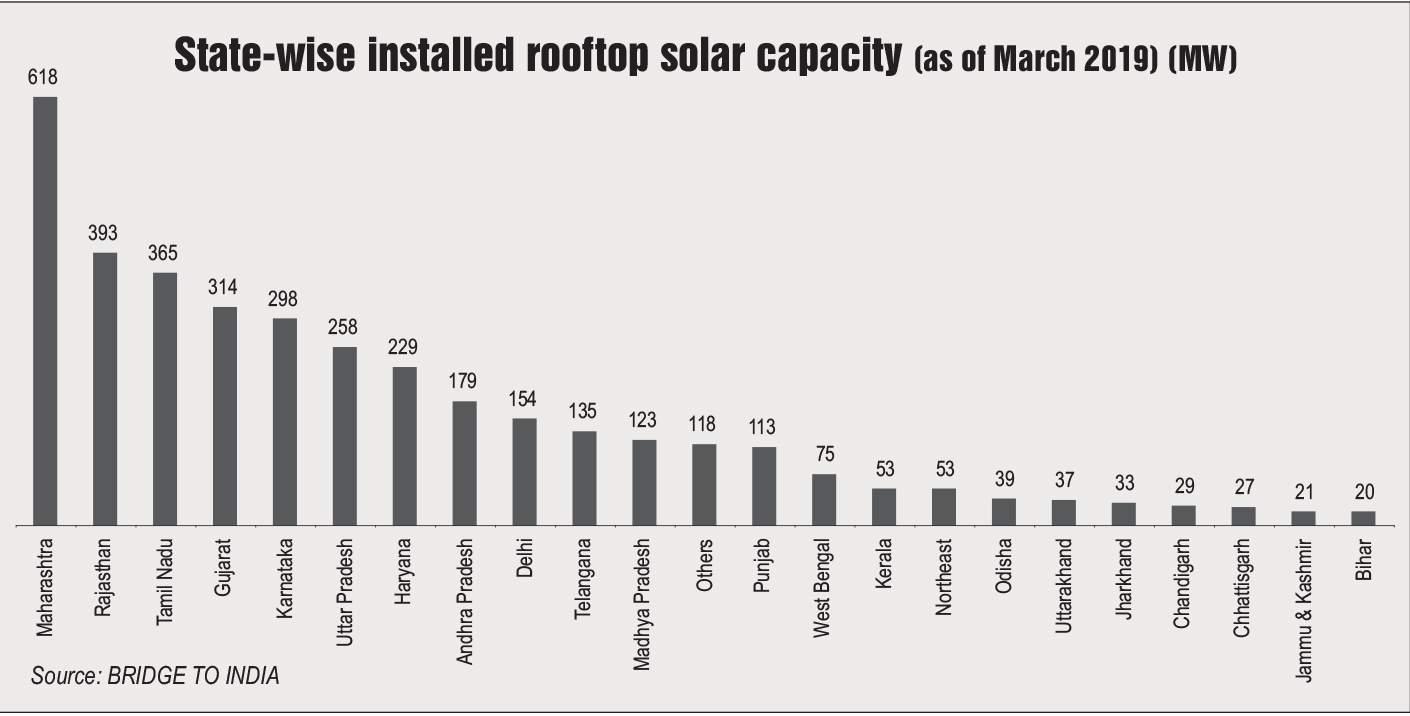 The Solar City Initiative of BSES Rajdhani Power Limited (BRPL), which promotes rooftop solar installations in apartment complexes, is a key driver of rooftop solar in the residential segment. In the first phase, of the total 1,000 rooftop connections, 60 per cent were for residential consumers. After the success of the first phase in Dwarka, BRPL launched the second phase in Shakurbasti, West Delhi. Meanwhile, the Madhya Pradesh government has come up with innovative policy measures to promote rooftop solar generation. Madhya Pradesh Urja Vikas Nigam Limited has done pioneering work in strengthening the renewable energy service company (RESCO) model in the state. It invited expressions of interest from various state departments, central government institutions and private institutions for the installation of rooftop solar systems on their premises. It also conducted site visits of the project sites well before the last date of bid submission to identify shadow-free areas. It assessed the month-wise actual electricity requirement of the proposed consumers based on their past electricity bills.

The state government set up data rooms in each building and undertook pre-engineering design work to assess the number of panels and inverters, and the length of cable required for rooftop solar systems. All these innovative approaches helped in achieving low tariffs. In the first tender, the state discovered a record low tariff of Rs 1.58 per kWh, while in the second tender, an even lower rate of Rs 1.38 per kWh was achieved. Post the success of the RESCO tender for government buildings, colleges and hospitals, the state government is now doing a similar demand aggregation for commercial and industrial (C&I) consumers in the Mandideep industrial area, near Bhopal. 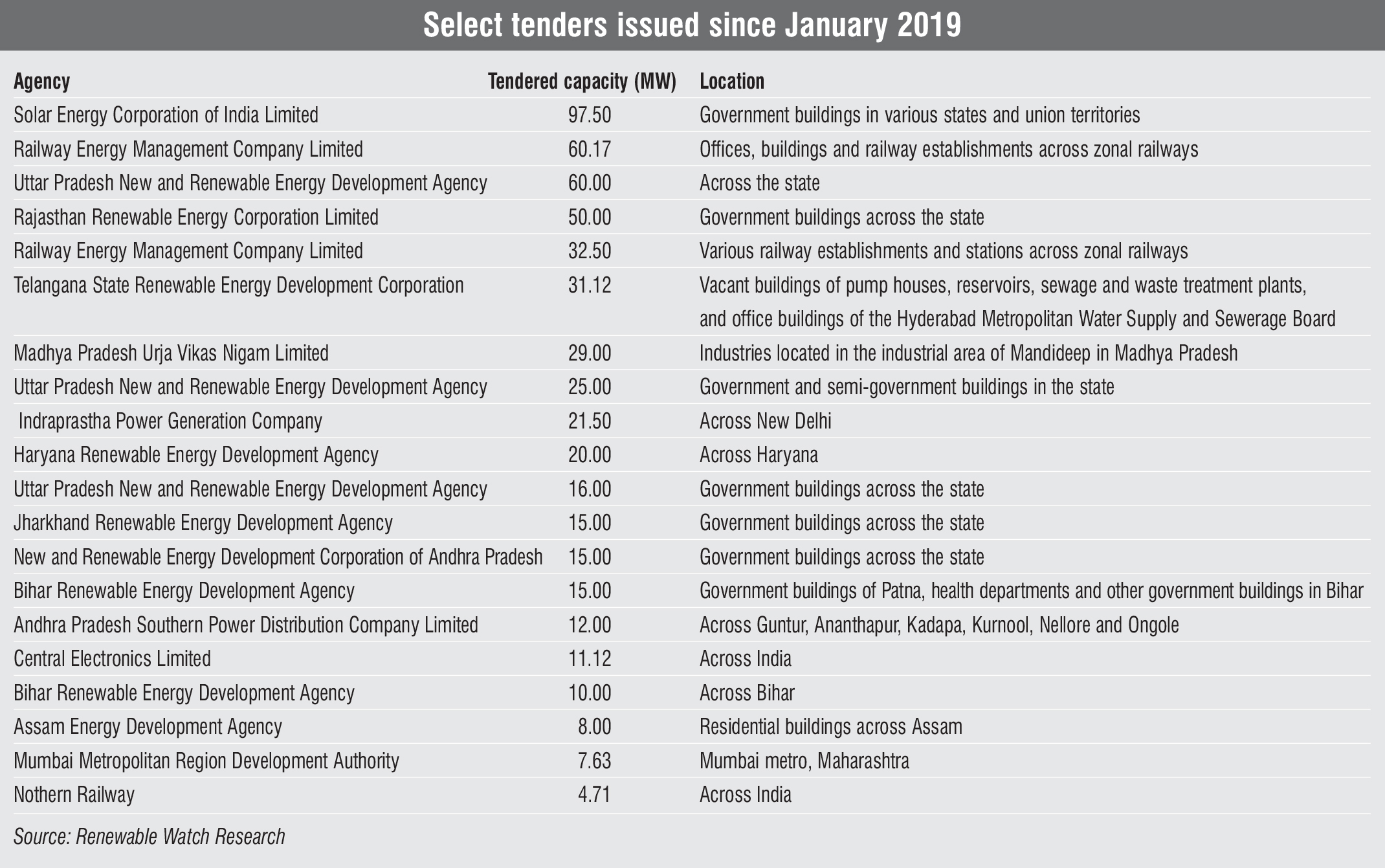 The rooftop solar segment in India continues to face several policy and regulatory challenges, which have not been addressed despite strong criticism from the industry. While almost all states have issued net metering regulations, the common belief of net metering being the solution to all the challenges facing the segment is losing steam. This is because these regulations vary across states and most states not only restrict the maximum capacity of rooftop solar systems, but also have a cap on the amount of power that can be fed back into the grid, impacting the project economics. While rooftops and on-site land of consumers can usually accommodate more than 1 MW of solar capacity, there is a 1 MW limit for both capacity installation and net metering. This is largely because discoms are not ready to install net meters. Many developers have undertaken complicated studies to convince the discoms that a higher capacity can be set up on these rooftops. Another challenge is the variation in contract demand in different states. There is also the problem of policy uncertainty. A case in point is the overnight change in stance on net metering in Uttar Pradesh. Further, there is lack of awareness about net meters among engineers working in various discoms. The restrictive open access policies are an impediment, particularly for C&I rooftop consumers. Most of the states have put in place stringent open access rules, which are not possible to follow. In addition, most states continue to impose open access charges on solar projects. 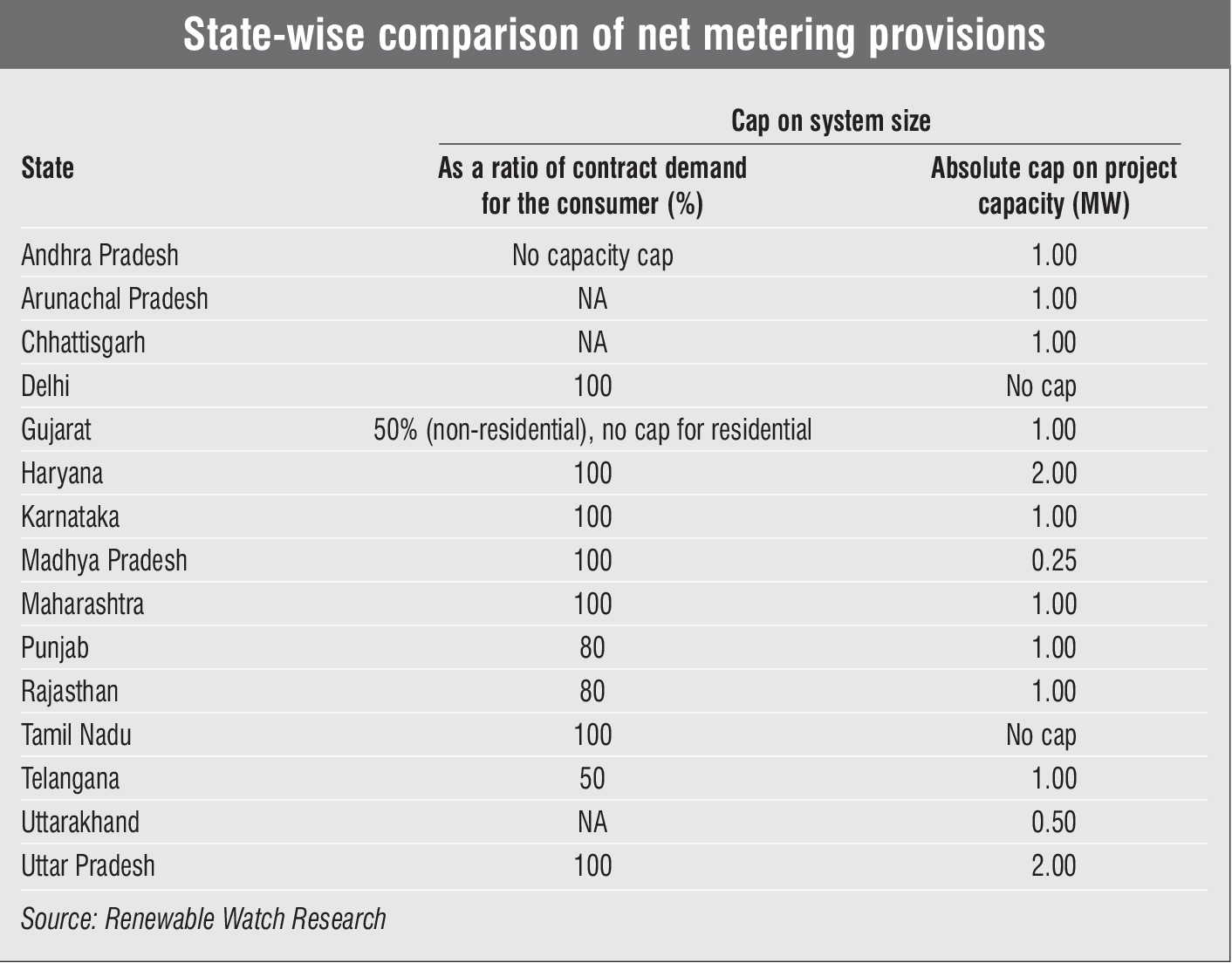 A major roadblock in the residential rooftop segment is the small system size, which increases the payback period. Besides, many household owners want to use their terrace and do not want to accommodate solar systems. If they go for a raised structure to accommodate the solar system, the cost increases substantially, making the installation unviable. Moreover, rooftops are not uniform in India, which is a major pain point for developers. No efforts are being made to raise awareness in the residential segment. As the profitability from each project is very low, the developers or EPC players in this space have no incentive to go for large-scale awareness campaigns. As a result, only those residential consumers install solar projects who know about the technology and are passionate about shifting to clean energy. In this scenario, consumers approach entrepreneurs and not the other way round. Thus, the role of entrepreneurs has to change.

Despite challenges, the future outlook for the rooftop segment remains positive, primarily due to the MNRE’s continuous efforts to change the discoms’ stance. In August 2019, the government released guidelines for the implementation of Phase II of the Grid Connected Rooftop Solar Programme, outlining the roadmap for achieving 40 GW of rooftop solar capacity by 2022. The availability of central financial assistance (CFA) for the residential segment and performance-based incentives for discoms, which have been assigned as nodal agencies, are the key highlights of the guidelines. The availability of CFA will provide a much-needed incentive to residential consumers to give up competitive grid power.

Meanwhile, the state discoms will benefit from performance-based incentives only if they deliver, which seems to be very challenging given the current state of the country’s discoms. Another positive step taken by the MNRE is the development of the State Rooftop Solar Attractiveness Index, which ranks all states in terms of their performance, growth, level of maturity, policy framework and implementation environment. This form of competitive federalism will foster growth in the segment.

The current installed rooftop solar capacity stands at less than 4 GW. This means that almost 36 GW of rooftop capacity will have to be added in the next two years to meet the 40 GW target by 2022. This seems highly improbable considering the country has taken a decade to achieve 30 GW of total installed solar capacity.