The solar power segment in India is going through a challenging phase with developer interest in bidding for large ground-mounted projects dwindling. This slowdown has partly been on account of mounting concerns over land acquisition, inadequate transmission infrastructure and right of way (RoW). Land prices have also skyrocketed in many parts of the country, with utilisable land slowly becoming scarce. In such a scenario, niche solutions such as floating and canal-based solar can provide an attractive alternative to developers and governments alike. While ground-mounted solar projects require 4 to 5 acres of land per MW, floating solar projects can be installed on water reservoirs/ lakes/ponds, and canal-based over or along canals, thereby freeing up land for agriculture, industry, housing and other development activities. The need for alternative sites for deploying solar plants and the abundance of waterbodies in India has contributed to the active deployment of these emerging solar solutions, especially floating solar.

India had less than 5 MW of floating solar installed capacity as of October 2019. However, the country has abundant waterbodies in the form of reservoirs inside hydro and thermal power plants as well as a number of lakes and ponds, which present ample opportunities for installing floating solar projects. As per media reports, even if 10-15 per cent of the existing reservoirs and waterbodies are utilised, there will still be a potential to deploy 300 GW of floating solar projects. Apart from offering significant potential to produce electricity, floating solar provides various technical advantages upon installation. Studies have shown that the cooling effect of water on solar modules lowers their temperature, thereby improving the energy yield and potential system efficiency. The lack of obstructions and shading in open waterbodies prevents the formation of hotspots, while less dust reduces soiling losses.

The bright prospects of the Indian floating solar market are evident from the results of the first and lone auction conducted by SECI in November 2018 for a 150 MW floating solar project at the Rihand dam in Uttar Pradesh. The auction saw tariffs going down to Rs 3.29 per kWh, which is quite comparable with ground-mounted solar project tariffs in the state. This is despite the high cost of floating solar projects, which is offset by improved power generation over a period of 25 years. The various technical and economic advantages of floating solar combined with its vast potential have made it a popular choice among large organisations such as NTPC Limited. NTPC alone has about 196 MW of floating solar projects under implementation at its various premises while over 55 MW of new projects have been tendered by the company during the past few months. This includes a 100 MW project being executed by Bharat Heavy Electricals Limited at Karimnagar, Telangana, and a 70 MW project by Tata Power Solar at Kayamkulam, Kerala. Other entities have also issued tenders for installing floating solar projects including SECI’s 250 MW tender in Tamil Nadu and the National Hydro Power Corporation’s 50 MW tender in Kerala. As per media reports, at least 25 floating solar projects have been tendered as of October 2019 and some of the them are already under implementation, while more than 1.5 GW of new projects are at the planning stage. 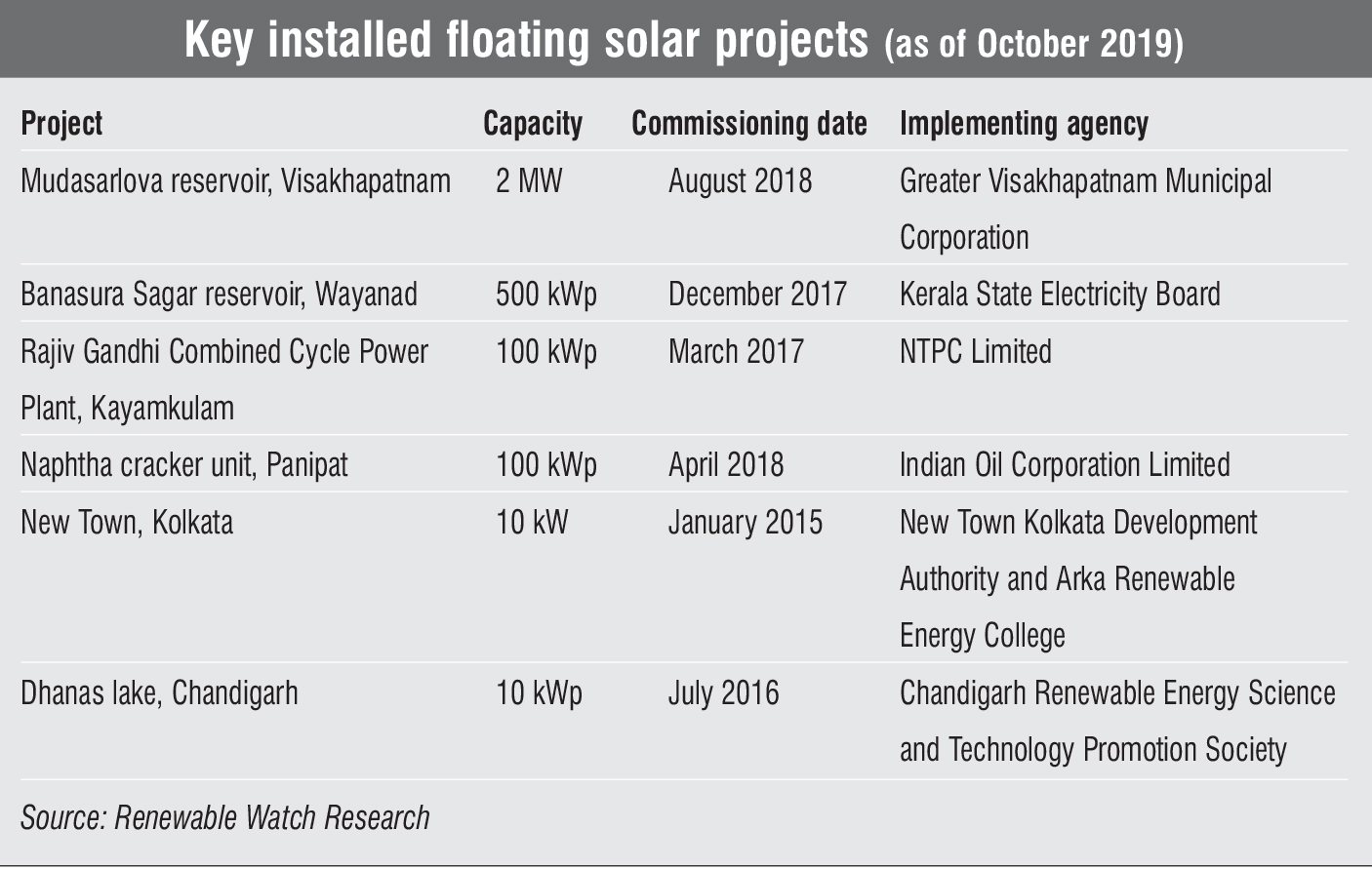 Canal-top projects were first conceptualised at the 2011 Vibrant Gujarat summit as a means to utilise the space above canals, and to save the cost as well as time associated with land acquisition. This resulted in the installation of the first canal-top project of 1 MW at Mehsana district in 2012. Since then, various other projects including two large projects of 10 MW each at the Narmada canal in Vadodara and nine projects in Punjab with a cumulative capacity of 20 MW have come up, leading to a total capacity of 66 MW as of October 2019. Reportedly, no other country has such a canal-top project pipeline. Meanwhile, canal-bank solar, another canal-based solar technology, has witnessed less growth with only 50 MW having been installed as of October 2019. A 14.5 MW project in Dehradun is the largest project in the canal-bank solar space.

Although the current installed capacity is quite small, the country’s huge network of irrigation canals offers a vast potential for installing canal-based solar projects. According to industry sources, zero canal-bank solar projects and  less than 150 MW of canal-top solar projects are in the pipeline. The stark contrast between the growth prospects of floating and canal-based solar is on account of some inherent issues in the implementation of canal-based solar technology. The execution of canal-top projects is challenging because of access issues, extensive civil work, and the coordination required with local government agencies and irrigation departments, which makes project implementation more cumbersome.

In financial terms, the project cost of both canal-top and canal-bank solar is more than 100 per cent higher than that of ground-mounted solar projects, according to industry sources. This significant difference in the project cost is due to greater civil work and the need for larger mounting structures for project construction. The factors that determine the cost of such projects include the geography of the site and the width of the canal (for example, a narrow canal will require a longer project for the same capacity). Tariffs for these projects are also higher, more than double the tariffs for ground-mounted solar projects, which significantly impacts power offtake and project viability. 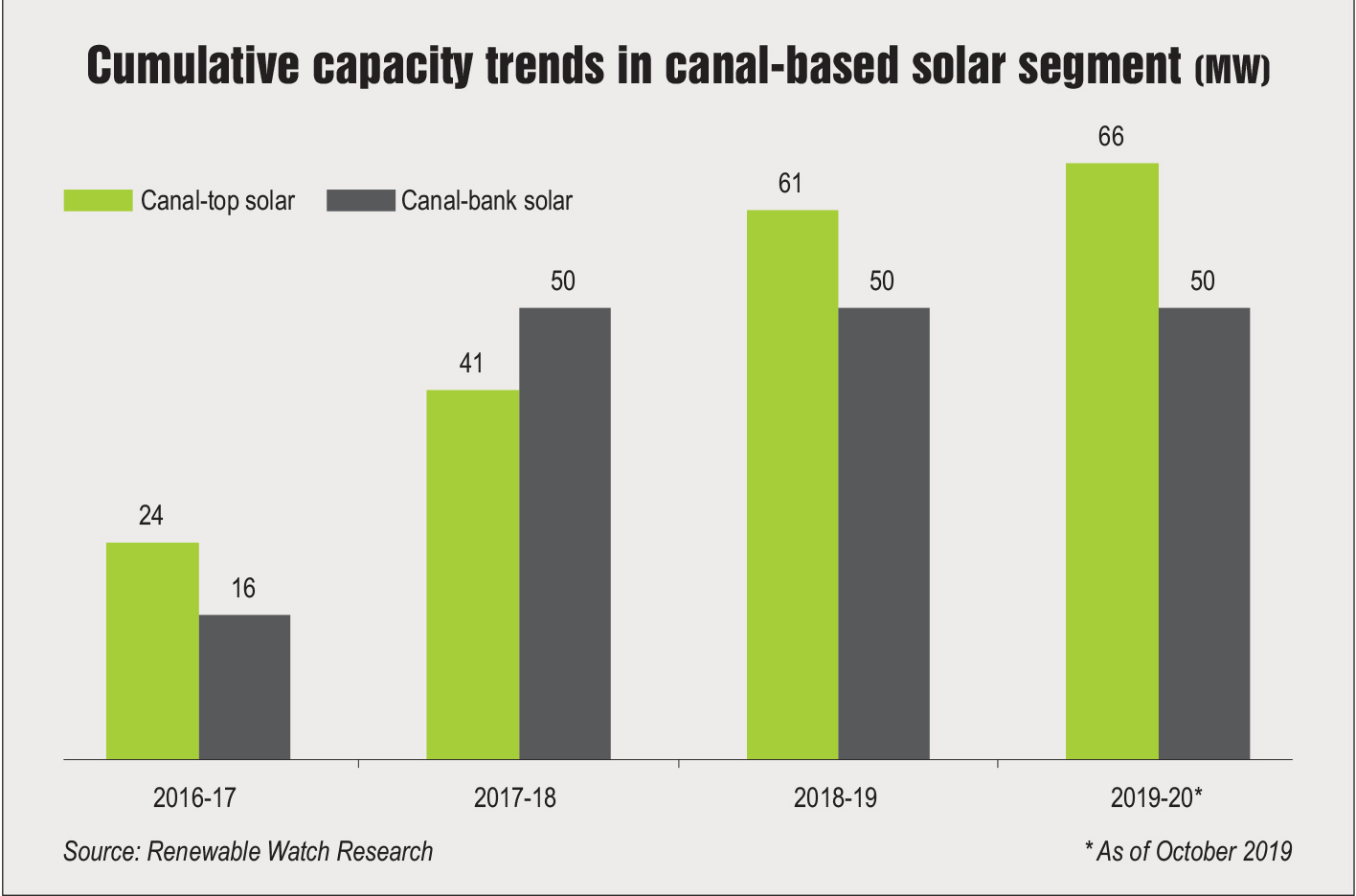 The present market size is quite small for both floating and canal-based solar projects. However, the outlook is quite different for both. Floating solar has high growth prospects due to low tariffs, ease of implementation and synergies with hydro and thermal power plants. Although there are no policies/regulations/incentives outlined for these projects, the attractive cost economics and synergies are expected to drive uptake. Meanwhile, the outlook for canal-based projects is not positive. This is because of high project tariffs, extensive civil work and the need for coordination with multiple agencies. Thus, a serious policy push is required to promote their deployment. The targets set under the Ministry of New and Renewable Energy’s lone scheme for canal-based projects, issued in December 2014, have been achieved and there is no further support from either the central or state governments.

Summing up, floating solar capacity is expected to grow significantly due to favourable market dynamics while canal-based solar will require the right impetus from the central and state governments to bring it closer to the commercials of floating solar projects.