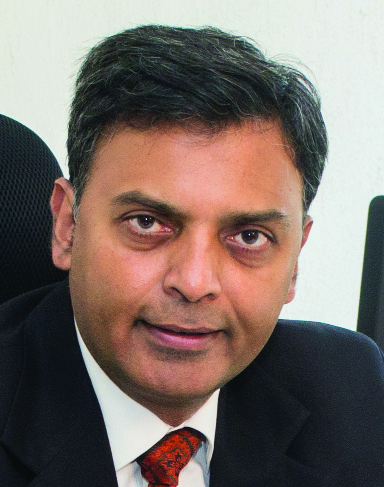 Breaking out of the traditional mindset and truly reflecting the essence of the Electricity Act, 2003, the Rewa project in Madhya Pradesh looked beyond state-owned power distribution companies (discoms) and sought institutional consumers to supply solar power to. Power supply from the Rewa solar project to the Delhi Metro Rail Corporation (DMRC) commenced in April 2019 and will meet approximately 80 per cent of its day demand.

It is notable that India’s pursuit to achieve 175 GW of installed renewable energy capacity by December 2022 has largely been driven by demand from state-owned discoms under the renewable energy purchase obligation. In an effort to fuel clean energy growth, discoms have often been mandated to procure more renewable energy, thus affecting their energy balance, which is largely driven by long-term power purchase agreements. The fallout of this in some cases has been financial losses to discoms because of fixed charges being paid for unused long-term capacity from non-renewable energy sources. The Rewa project proves the point that our ambitious target of renewable energy could be met not only by giving regulatory directions to often unwilling discoms, but simply by encouraging willing institutional customers to procure renewable energy.

Looking beyond traditional discoms may be a more optimum way to promote the future growth of renewable energy. Large industries, both public and private, and institutions such as oil refineries, steel plants, municipal corporations and railways, which operate independently and strive to be cost efficient, can fit in the domain. For example, Steel Authority of India Limited’s power and fuel costs for 2018-19 were almost 12 per cent of the total expenses, with it consuming 11,120 MUs from a mix of sources. If 10 per cent of this requirement could be met from renewables, it would translate into a solar project of almost 650 MW, which is more than the size of an ultra mega solar project.

It is often argued that encouraging institutional customers to procure renewable energy would harm the concerned discoms. However, it needs to be considered that the Electricity Act, 2003 anyway provides for open access, which is a non-discriminatory provision for the use of transmission lines or distribution systems or associated facilities by any licensee or consumer or person engaged in generation. With this provision, it can be argued that policymakers have had the foresight that state-owned discoms will have to compete in the changing market paradigm, and the notion of loss as a result of consumers exercising their option is not going to adversely affect the financial position of the discom. If the Electricity Act, 2003 provides open access for all colours of energy, it is only reasonable that its principles should be reinforced to support the growth of green energy.

The current system of renewable energy project development in India largely rests with public authorities. The role is limited not only to the development of land and associated infrastructure, but extends to project conceptualisation, project structuring and bid process management. Till now, the bidding organisations have largely been driven by the requirements of state discoms. Contrary to this, the Rewa project, implemented by Rewa Ultra Mega Solar Limited (RUMSL), has supplied power to not only state discoms but also to an institutional customer, DMRC. RUMSL has been assisted in this process by the International Finance Corporation as the transaction adviser, which played a key role in developing risk mitigation mechanisms, conveying market concerns to RUMSL and convincing the market of the strengths of the Rewa project. The World Bank has provided financial assistance on concessional terms for the project, apart from offering technical assistance from the very beginning, thus buttressing RUMSL as an organisation and the Rewa Solar Park as a project. Notably, RUMSL was created in July 2015 and, till the time of the Rewa bidding, did not have a single full-time employee.

The point is that other bidding authorities, with bigger structures and stronger financials, could also consider such an option to encourage institutional customers to procure power from solar projects. 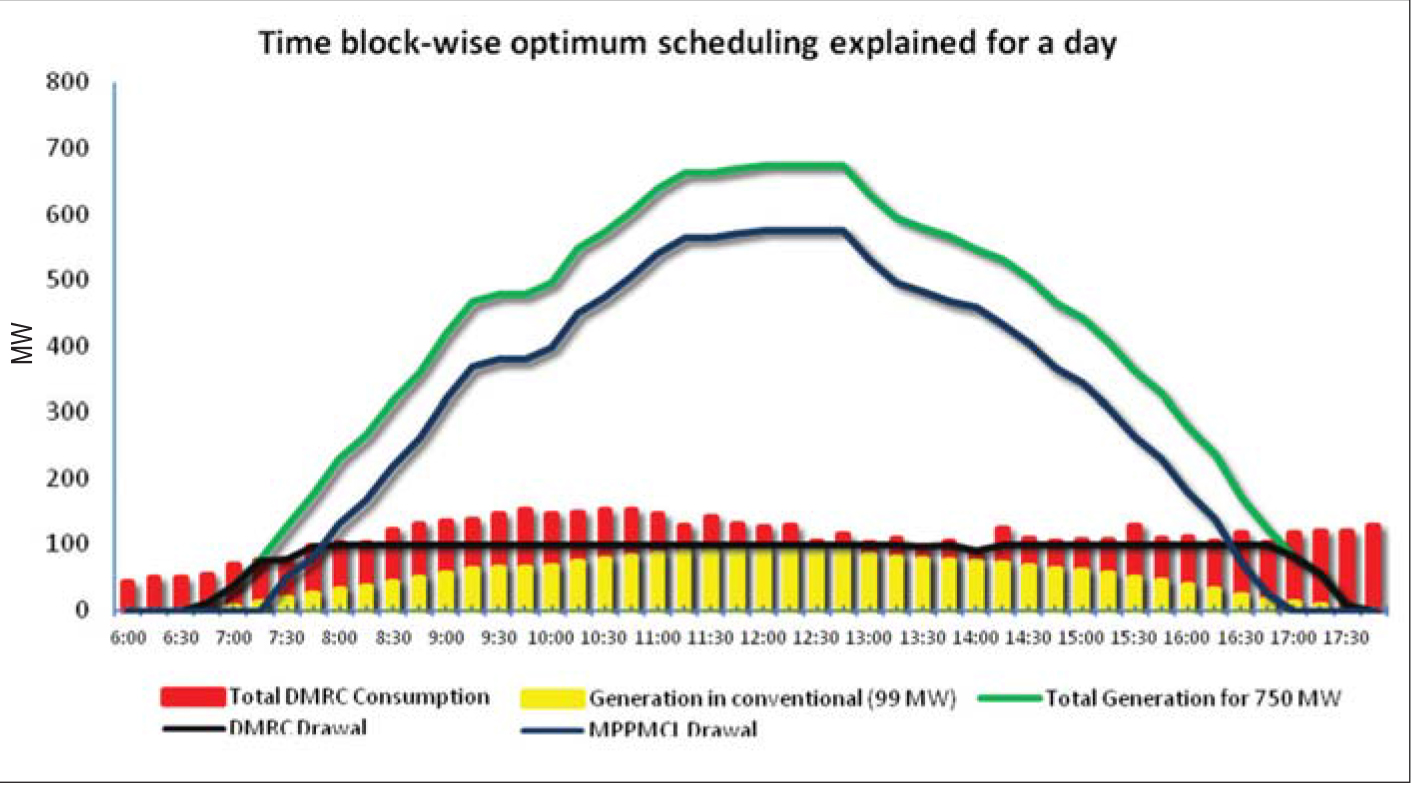 The Rewa project developed “energy contracts”, rather than the traditional “power contracts” prevalent in the country, both in the conventional and non-conventional space. It also developed the concept of “optimum scheduling”, considering the demand profile of DMRC. A metro rail’s demand profile is unique as compared to any other large industrial consumer as it is primarily dependent on the frequency of trains, seasonality in load (there is greater requirement during the summer months due to the high AC load) and difference in loads between weekdays and weekends due to train frequency.

Owing to optimum scheduling, Madhya Pradesh’s discoms are not scheduling solar generation in the early morning and late afternoon hours, when the state’s demand is rather low. Further, they are absorbing higher generation during peak generation, that is around noon, which would otherwise have been curtailed in a normal capacity transaction. This enables higher solar energy penetration for a given long-term open access (LTOA) capacity for DMRC.

This helps in optimum scheduling, since DMRC, unlike discoms, does not enjoy the interstate transmission system (ISTS) waiver. Further, this leads to reduced curtailment by DMRC due to a narrower difference in its load and the energy scheduled for it. With DMRC’s existing load profile, based on the above optimum scheduling, for an LTOA capacity of 99 MW for DMRC, a supply of 345 MUs has been possible to DMRC. For the same quantum of LTOA, with usual scheduling, only 208 MUs of solar energy could have been scheduled. This has resulted in a reduction in ISTS charges from Re 0.96 per kWh to Re 0.58 per kWh for the same quantum of LTOA. The implementation of optimum scheduling has been possible only because of the complete support we have received from the load despatch authorities, especially the Western Regional Load Despatch Centre.

Bringing in large institutional customers improves the bankability of projects since there are multiple users with different creditworthiness. This tides away the need for multiple layers of payment guarantee as the risk of recovery for sale of energy is spread across different users. In the Rewa project, while a three-tier payment security mechanism, including a payment security fund and state guarantee, was needed to strengthen the procurement by discoms, a letter of credit issued by DMRC was considered a sufficient assurance for payment security. Having an institutional customer as one of the offtakers positively affects the tariff, and power distribution companies, being the other offtakers, benefit from the reduced tariffs.

To encourage institutional customers to procure renewable energy, it is necessary to move away from a subsidy-based model. However, it is necessary to have principles that take into account the specific nature of renewable energy, especially solar energy. The present waiver of losses and ISTS charges is limited to distribution licensees. Hence, a usual institutional customer would have to bear ISTS charges, which are on a per-MW basis, and allow a 24-hour drawal while it is procuring power for only the sunny hours. The charges on a per-MW basis flow from the concept that in a constrained demand–supply scenario, new generation capacity will need an associated transmission network. From a country that has seen energy shortage, we are now energy surplus. The load generation balance reports for 2018-19 had predicted a surplus of 4.6 per cent in energy and 2.5 per cent in peak demand. In the current scenario, power flow is determined more by the demand from a load, rather than availability from a generation source. In view of the same, the need for an associated transmission system might not arise all the time. Hence, this could be an opportune time to start discussing the possibility to move to a per-unit transmission charge for renewable energy projects rather than the per-MW charge prevalent today. In states like Madhya Pradesh, the regulator has determined the per-unit transmission charges for renewable energy projects, which significantly bring down the connectivity charges. In the longer term, this would do away with the indirect incentives in the form of “no transmission charges” that are currently applicable to ISTS-connected renewable energy projects.

In the same context, the current practice of blocking interregional corridor and open access capacity for renewable energy requires a rethink so as to enable round-the-clock (RTC) and long-term supply of power. While the under-utilised link in non-sunny hours is being used for short-term supply to maintain optimum power flows, facilitating long-term supply will significantly help the beneficiary and avoid augmenting transmission capacity.

The advent of renewable energy as a major player, coupled with out-of-the-box thinking, can lead to myriad possibilities. For example, the transmission channel developed for supply from the Rewa solar project to DMRC is unutilised during the non-sunny hours and this can be utilised to supply the conventional power available with the Madhya Pradesh discoms to DMRC during that period. Further, solar energy from RUMSL and conventional energy from Madhya Pradesh’s discoms can be used in a complementary fashion to supply RTC power while using the same transmission channel. As of now, the open access framework works as a one-to-many and many-to-one configuration. For the proposal to work, the open access application process should allow for multi- to multi-mode.

Further, there needs to be an assessment of night-time marginal supply and load curve for utilities. Discoms whose commercials so permit can provide banking facilities during the day to park the excess renewable energy generation to supply during non-sunny hours. This will lead to true RTC supply of renewable energy with commercial contracting. Such night banking should be encouraged through policy and regulation. It is also suggested that renewable energy character should be given to the flow of banked renewable energy power during non-generating hours. 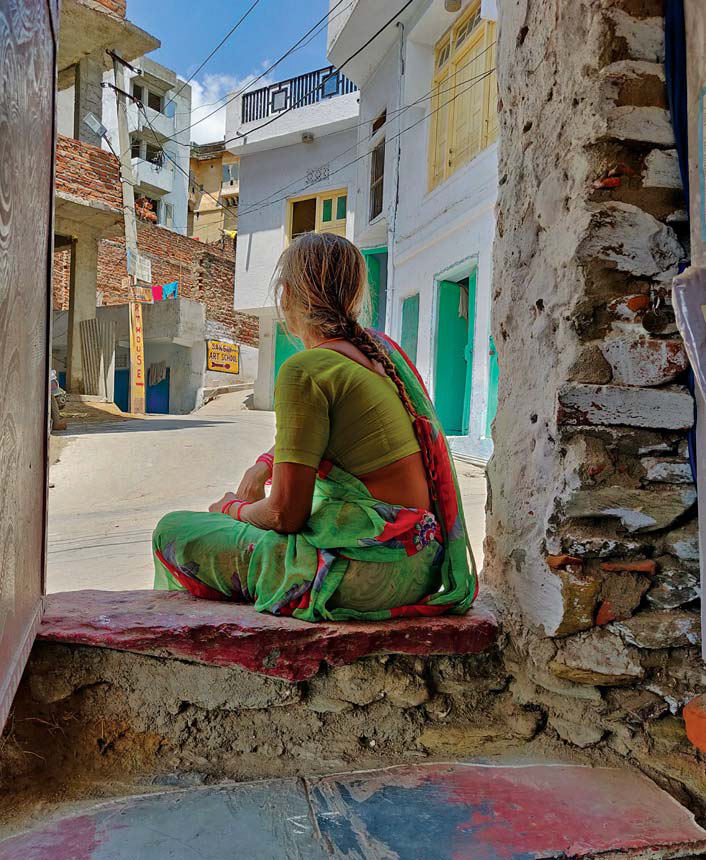 Going forward, it is imperative that the bidding authorities develop alternative power sale arrangements, which look beyond the traditional discoms. Energy-intensive industries, where power costs are in the range of 30-40 per cent of the input cost, are ready-made users. It needs to be appreciated that the standard bidding guidelines issued by the government provide for “energy contracts” and do no limit themselves to the traditional “power contracts”, even though Rewa is, till date, the only project in the country that has implemented energy contracts. It points to the open mind and sagacity of the government that it recognised the innovation of energy contracts and included the same in the standard bidding guidelines.

The bidding authorities will need to be proactive to understand the demand profile and design contracts to support it. There is always a debate whether the demand should come first or whether the bidding authority should be more proactive in its thinking. One can say from experience that authorities that are equipped to design renewable energy transactions can better emulate the learnings from various projects. This also saves the user (institutional consumer) from spending time and effort in project designing and development, which is a non-core activity for them.

Madhya Pradesh is taking forward its maiden effort in supplying solar power to an institutional customer through its upcoming 1,500 MW solar project in Neemuch-Agar-Shajapur by supplying power to Indian Railways. Indian Railways will be consuming this power in Maharashtra, Gujarat, Uttar Pradesh, Jharkhand, Bihar, Haryana, Rajasthan.  This will be interesting since power needs to be scheduled to many states across many regions. However, we need many more steps like these so as to encourage large institutional customers to directly consume renewable energy. This would enable renewable energy to spread its wings beyond the confines of discoms and fly higher towards the 175 GW target that the country has set for itself.