With the pressure to reduce solar power plant costs, quality has become a serious concern among developers. A typical solar panel is expected to last for 25 years at a nominal degradation rate. However, poor quality components used by some manufacturers to improve their margins in a low-cost environment can reduce the efficiency and intended life of the panel. As a result, the effective generation from solar power plants decreases, making them unviable for all stakeholders. Solar glasses and mirrors are among the most critical components of solar power plants, and their quality is often overlooked by EPC contractors and developers. For solar PV panels, the glass and its backsheets act as the first point of contact with solar irradiation, while for concentrating solar power and solar thermal projects, mirrors are the primary concentrators of solar irradiation.

A solar panel has several components that perform different functions. The glass sheet protects the solar cells from damage and transmits the incoming irradiation to them. Therefore, a developer must select the right panel with good quality glass sheets in order to avoid generation issues in the future.

Poor quality solar glass sheets can become cloudy over time, which can severely affect the level of irradiation on the cells. Moreover, if the glass cracks, water seepage can cause a fire hazard in the panel. Poor quality flat plate glass sheets have more such issues that make them unusable for solar panels. These are mostly used in cheaper brands of monocrystalline and polycrystalline solar panels manufactured by small companies to avoid low margins. Thin-film or amorphous solar panels can only use flat glass sheets due to their unique method of construction. Typically, cheaper panels have glass sheets with thickness of 2 mm-2.5 mm. That said, high-end thin-film manufacturers have been able to improve the quality of glass sheets by using thicker glass plates of 3 mm-4 mm.

Tempered glass presents a solution to tackle these issues. It is a toughened glass sheet with up to six times the strength of normal plate glass. Tempered glass is manufactured by chemically or thermally treating the glass plate. It is considered to be much safer than other glass sheets. When broken, it shatters into smaller pieces instead of long sharp shards as in the case of normal glass plates. Tempered glass makes the solar panel durable enough to last the entire life of the panel. However, thick glass sheets and tempered glass add to the weight of the panel, which may cause balance issues for the module.

Typical glass sheets have a high reflective index, and an anti-reflective coating may be added to the glass before it is tempered. This helps in reducing the amount of reflected light, which increases the light absorbed by the cells by around 2.5 per cent. More light absorption will improve the efficiency of the panel and lead to better generation from the plant.

With the launch of bifacial modules, the use of glass-glass panels has emerged as a new trend. These panels have a glass sheet at the rear end as well, similar to the dual-faced solar cells in bifacial panels. These panels are different from the typical backsheet-based solar panels. Glass-glass panels allow better transparency on both ends of the panel, generating more electricity as compared to backsheets. However, studies have shown that glass-glass panels may not necessarily be good for the performance of a solar power plant.

DuPont studied the effect of glass-glass panels installed on 20 MW of solar panels. For installations that were three to four years old, it was found that 13 per cent of the modules were identified with defects by engineers. In panels installed over four years ago, the backsheet defect rate was typically around 35 per cent. According to DuPont, if the defect rate of glass-glass panels is as high as that of panels with backsheets, it is a cause of serious concern.

Borosil Glass Works is the leading manufacturer in India. In 2017, its Indian facility created tempered glass with 2 mm thickness, as compared to the typical thickness of 3.2 mm. It also manufactures antimony-free low-iron solar glass. Reportedly, its glass-glass bifacial modules with 2 mm tempered glass sheets improve the output by 30 per cent, reduce the rate of failure and have a life of up to 40 years. Other notable glass manufacturers include Euro Multivision and GSC Toughened Glass.

The density of incoming sunrays is not high enough to directly generate heat or power. Therefore, mirrors are used as solar thermal reflectors in a collector to concentrate the irradiation in a small area. Considering the role of these mirrors in increasing solar asset efficiency, they should have high reflectance, low capital costs and high durability. Typically, the reflectance of solar mirrors is less than 1 due to the various losses in the process. According to a research paper by Hamzeh Jamali, scientists have been working to achieve a reflectance of 1 in solar mirrors. While it has not happened yet, manufacturers have experimented with various materials and manufacturing methods to improve the efficiency of solar mirrors.

There are various types of materials used for making solar mirrors. Glass is the oldest choice and is used to manufacture two kinds of solar mirrors – first-surface and second-surface solar glass mirrors. In first-surface mirrors, the glass is coated with protective and reflective films positioned on the front side. In second-surface mirrors, the reflective film is positioned on the back side.

According to Jamali, scientists have prepared silvered mirrors using high-transmittance low-iron glass. These mirrors have high reflectance and high specularity. They are durable and distortion resistant. Aluminium mirrors have also been developed by depositing aluminium vapour over glass. It was found that silver has poorer adhesion as compared to aluminium and is more difficult to protect. Also, the latter has fewer corrosion problems and higher reflectance.

Concentrating solar power and solar thermal technologies have found limited success in India so far. Even so, the quality concerns associated with mirrors and other components used in these cannot be ignored. With the amount of capital invested in these projects, poor efficiency can lead to a loss of generation as well as high financial losses for developers. 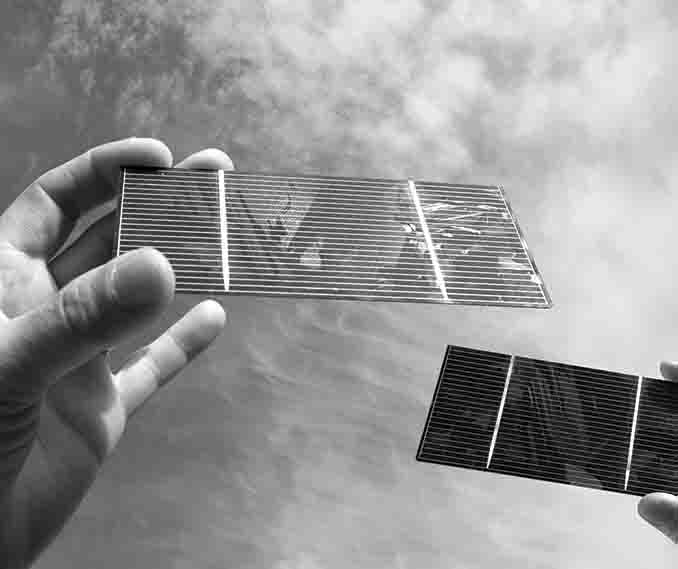 Solar glasses and mirrors will continue to be a critical part of the solar power and heat generation apparatus. Therefore, significant improvements in these technologies can be expected as the size of installed capacity increases in India and globally. Improvements in solar glasses can be expected, especially in the glass-glass segment to promote the use of high efficiency bifacial solar panels.

The sustainable and safe disposal of solar glasses and mirrors at the end of their lifetime is a cause for concern since they may contain harmful chemicals. To this end, the Ministry of New and Renewable Energy has mandated the recycling of solar panel glasses that contain antimony. Such recycling facilities are not yet available in India. This will serve as a possible business opportunity when solar glass waste begins to enter the system.