Rapid urbanisation and changing lifestyles are increasing the electricity demand in Indian towns and cities. Many utilities are facing difficulties in keeping up with the rising power requirements, especially in summer months due to air-conditioning loads of offices in the afternoon and residences in the night-time. As a result, these utilities resort to load shedding, while consumers opt for polluting diesel generators to meet their power requirements. Recognising solar power as a potential solution to this issue, the Ministry of New and Renewable Energy (MNRE) launched the Development of Solar Cities programme, in February 2008, which was modified in January 2014 under the Twelfth Five Year Plan. While solar power cannot cater to night-time loads, it can certainly help meet some of the daytime power demand of cities, reducing the burden on utilities as well as consumers.

According to the MNRE’s programme, the selected solar cities aim to reduce the projected conventional energy demand by 10 per cent in five years, through a combination of renewables and energy efficiency measures. The programme encourages urban local bodies to work in this direction and supports them in preparing dedicated roadmaps and master plans to become solar cities. The scheme also assists in capacity building and setting up institutional tie-ups. In addition, financial assistance up to Rs 5 million per city is provided depending on the population and initiatives taken by the city administration. Of this, Rs 1 million each is for the preparation of a master plan within a year along with implementable detailed project reports (DPRs), setting up of a solar city cell that will operate for at least three years, and effective oversight of implementation. The remaining Rs 2 million is for capacity building and other promotional activities. In addition, the financial incentives for the installation of renewable energy projects under various other MNRE programmes will be applicable to solar cities.

The development of solar cities is not confined to solar deployment, but may also include other renewable energy sources based on the need and resource availability of a particular city. These cities are identified on the basis of their population, potential, commitment towards renewable energy and energy conservation, initiatives taken by the local administration in this direction, and their willingness to allocate resources and promote activities initiated under the programme. The selected cities have a population between 0.05 million and 5 million, barring those in the special category states including the north-eastern states, hilly states, islands and union territories, which may have a population of less than 0.05 million. The MNRE has approved 60 solar cities including 13 pilot and five model cities up to the Twelfth Five Year Plan period under the Development of Solar Cities programme.

As of June 2019, master plans have been prepared for 50 solar cities, while stakeholder committees have been constituted in 21 cities and solar city cells have been created in 37 cities. In the model and pilot category cities, solar PV projects with an aggregate capacity of 9,029.17 kWp and solar water heating systems with an aggregate collector area of 7,894.5 square metres have been sanctioned. Out of the total Rs 1,016.61 million funds sanctioned under the scheme, Rs 280.19 million has been released. In addition, the MNRE had sanctioned master plan preparation for 52 green campuses up to the Twelfth Five Year Plan period. Under this, the MNRE provided central financial assistance of up to Rs 0.5 million for preparing these master plans for educational institutions, offices, and residential and commercial complexes. The green campus scheme ended in 2017, under which a total of Rs 10.2 million was released as against the sanctioned amount of Rs 25.9 million. 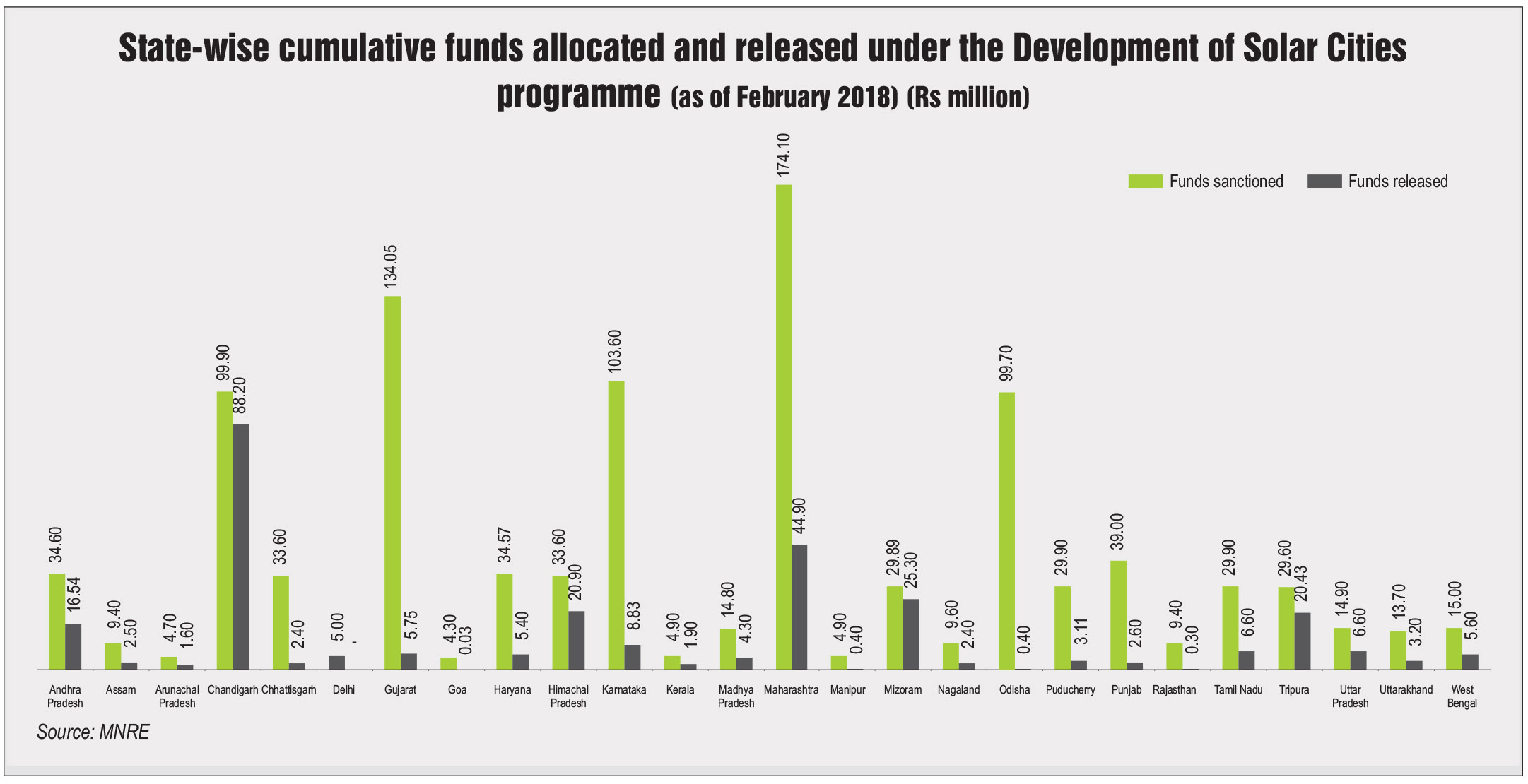 Among the 60 selected solar cities, Chandigarh, Bhubaneswar, Gandhinagar, Nagpur and Mysore have been identified as model solar cities. They have been doing notable work in promoting solar power. Since land is a constraint in most cities, the majority of the solar capacity has been installed on rooftops. Chandigarh, selected by the MNRE as a model solar city, has set a target to install 69 MW of solar plants, both in residential and government buildings, by 2022. As of September 2019, the Chandigarh Renewal Energy, Science and Technology Promotion Society is already generating 30 MW of power and striving to meet the remaining target. To promote solar uptake, the local administration, in May 2016, had mandated the installation of rooftop solar projects on properties with an area equal to or greater than 500 square yards and at group housing societies. Following this, 6,500 out of 7,600 residential, commercial and industrial buildings have installed solar projects. Another model solar city, Gandhinagar has been at the forefront of rooftop solar deployment with the Gandhinagar Solar PV Rooftop Programme launched as early as in 2010-11. The programme, with a target of 5 MW, encouraged residential and public consumers to install rooftop solar systems. There was no capital subsidy and only generation-based incentives were provided under the public-private partnership model, with developers selected through bidding. After the successful implementation of this programme, the Gujarat government decided to replicate it in the other identified solar cities of Surat and Rajkot.

Delhi has also adopted a utility-centric business model for wider uptake. BSES Rajdhani Power Limited launched its Solar City initiative in January 2018 with the second phase starting in November 2018. In the first phase of the Solar City initiative, about a hundred housing societies and apartment complexes in Dwarka installed rooftop solar systems. The second phase covers the residential areas of Shakurbasti, which is estimated to have a rooftop solar potential of 15 MW. As of November 2018, 14 societies have finished installations with a total installed capacity of 1 MW, and work is in progress in six more societies with the total capacity expected to cross 2.5 MW soon.

Other cities like Puducherry have proposed to provide subsidy to 15,000 domestic consumers for installing rooftop solar systems in the 1-3 kW range. Gurugram issued an order in November 2018 to provide a rebate of Re 1 per unit to solar power generators and an additional Re 1 per unit if they have battery backup as well. Gurugram’s installed solar capacity reached 40 MW as of March 2019, increasing by 60 per cent in the past year. 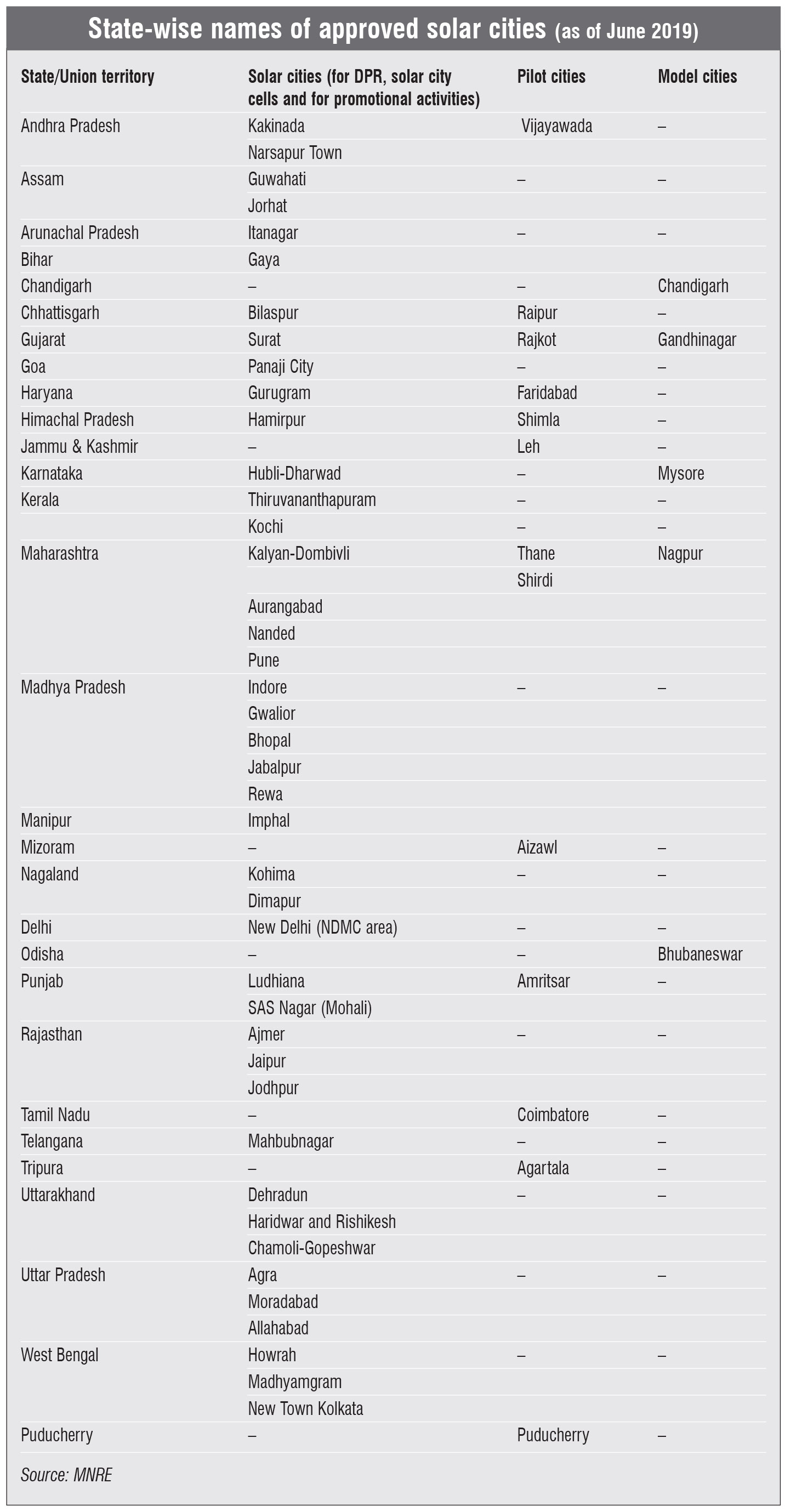 While many solar cities have achieved impressive growth in solar power uptake, some are yet to begin their journey in this space. These cities lag behind due to subdued consumer interest on account of high upfront capital investments and the lack of awareness regarding the incentives available and the favourable regulations. In such cases, it is important for the city administration and discoms to get involved and assume the role of demand aggregators. They may adopt utility-centric business models to increase uptake, thereby managing the local demand and supply more efficiently. In this regard, innovative business models with net metering or gross metering or a combination of both can be explored to encourage consumers.

In recent years, solar power has received a good response from commercial and industrial consumers looking to reduce their operating costs and save on their electricity bills. Specialised renewable energy service companies have emerged to cater to this category of consumers and supply rooftop solar power at affordable rates. A similar approach can be adopted for public and domestic consumer categories to remove the constraints for offtakers without any subsidies and increase solar power uptake. Going forward, floating solar projects can be deployed by city authorities and utilities to utilise spare water-bodies and energy storage can be incorporated with solar systems to provide better grid reliability in these solar cities.

In sum, since solar power is more affordable as compared to grid power, it makes perfect commercial sense to create solar cities even without incentives.