The status of junction boxes in the solar power market imitates their physical arrangement in a solar module, hidden at the back and often overlooked. However, this is not a reflection of their importance in a solar power plant. The junction box is simple in design yet critical to solar power operations. It is a small enclosure that houses the electrical parts of the solar panels and protects them from external harm. Increasingly, these junction boxes are serving as “smart houses” for solar panels, with the enclosure of components that make the panels smart.

The junction box is pre-installed behind  solar modules in which the PV strings are electrically connected. It is attached to the back of a solar panel with the help of silicon adhesive. The junction box makes it easier to connect the panel to the array through connectors. It is the output interface of the solar panel, bringing together the connectors and the input/output cables. A critical function of the junction box is to protect reverse current. It houses diodes which do not allow the current to flow back into the system in case of shading or debris on the panels. The junction box helps keep corrosive elements away from the wires and conductors. It has high temperature resistance, water resistance, ozone resistance and other important properties. The junction box enhances the efficiency of solar panels as it optimises and stabilises the power generated by the system, thereby making the power safe for further transportation and use.

Given the critical function of the junction box, its quality becomes important. All junction boxes must pass through quality inspection checks by testing companies such as TUV and UL (Technischer Uberwachungs Verein and Underwriters Laboratories). Only after the boxes have passed the certification tests can they be safely used across the world. Quality audits and checks based on international norms, guidelines and quality standards such as IEC/EN 62790 and UL 3730 are needed to be carried out by manufacturers. In addition to these, domestic junction box manufacturers have to adhere to guidelines by the Ministry of New and Renewable Energy.

Despite quality checks and tests, durability issues and failures have been observed in some cases. The primary failure modes include burnt bypass diodes, low power and high energy stress on the system. Other reasons for failure are the melting of plastic components, broken latches and the separation of external connectors. Since junction boxes function in high temperature environments, extreme heat can have an adverse impact on the operations of the components. Water seepage and the corrosion of connectors and wires are yet other issues that can significantly hamper the operations of solar power plants, even leading to fire in some cases.

Over time, junction box technology has evolved while the functionality has remained the same. As the output from solar modules increases, the heat generated also rises. As a result, diodes have to be more powerful and junction boxes better equipped to dissipate more heat. To this end, cool bypass switches have been introduced to replace the traditional diodes. This is done to shed the excessive heat generated when shading happens. The cool bypass switches open the circuit when the panels try to absorb energy and prevent the system from heating.

With the increasing popularity of bifacial modules, junction boxes have to deal with even more output resulting from generation on both sides of the solar module. Moreover, to prevent shading on the back side, junction boxes can no longer be rectangular and big. As a result, new junction boxes have surfaced that are smaller in size. They have moved to the side of the modules, while their ability to dissipate heat has increased.

Junction boxes are now increasingly becoming smart. Companies such as TE Connectivity are bringing out junction boxes with printed circuit boards that can be integrated into solar panels with monitoring, optimisation and rapid shutdown abilities. Manufacturers are also adding inverter technology to junction boxes. According to research by the International Technology Roadmap for Photovoltaic Results, while traditional junction boxes may continue to rule over the next few years, the ones with additional functions of microinverters (Direct Current [DC]/AC) and DC/DC converters are likely to gain traction.

Technological evolution has also paved the way for innovations in the solar junction box design. One such innovation is the split-type junction box that was introduced by the REC. In this junction box, three bypass diodes are installed in three different smaller boxes that are attached to a single cable. This helps manufacturers save on one cross-connector, which not only saves space and cost but also reduces internal panel resistance. Internal tests by manufacturers have exhibited a reduction of around 20 degrees in the heat build-up in split-type junction boxes as compared to traditional junction boxes. Heat reduction and dissipation helps increase the output and reliability of modules.

Manufacturers have also introduced a smart system in junction boxes that allows them to communicate with modules. Boxes with integrated Wi-Fi technology enable tracking, monitoring and control of output from individual modules. The voltage, current and temperature parameters can be read and analysed to determine whether servicing of parts is required. If the temperature rises beyond a level or a fire erupts in a junction box, the communication layer helps in shutting down the modules immediately. Other smart junction boxes also feature removable covers that enable easy technological upgrades. 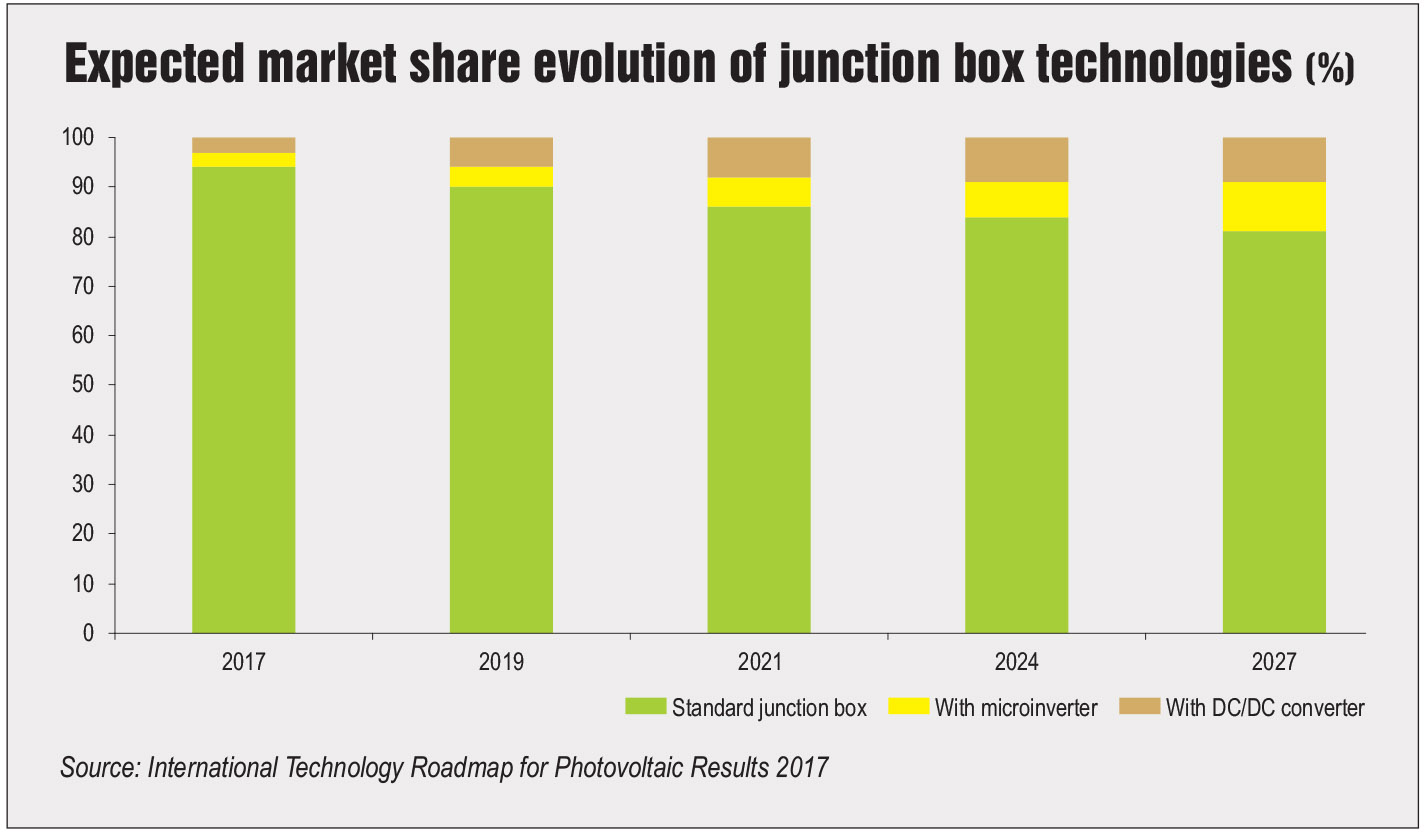 Meanwhile, competition has increased from Taiwan, Malaysia and Thailand. However, in the present low-tariff, low-margin scenario in India, junction box manufacturers will have to take cost-cutting measures and improve efficiencies. As a result, the market for highly efficient smart junction boxes will open up in India.